The consumption of alcohol in America has historically been a source of contention and the 3.2 beer is a good example of this. If you have heard the term and you are wondering just what is 3.2 beer, you’ve come to the right place—we tell you everything from the history down to the nitty-gritty of the math of alcohol percentages.

According to the National Institute on Alcohol Abuse and Alcoholism, 85 percent of Americans aged 18 or older consume alcohol. Alcohol consumption in the country has certainly come a long way considering at one point, long ago, there was a federal ban on the manufacture, sale, and consumption of alcohol.

The ban, also known as the Prohibition, began with the Eighteenth Amendment of the United States Constitution. Proposed by Congress in 1917 and ratified in 1919, the amendment prohibited the consumption of intoxicating liquors.

In 1919, Congress passed the National Prohibition Act, popularly known as the Volstead Act. The Act prohibited the sale of alcohol and gave the federal government the mandate to implement this requirement but the government lacked the resources to do so.

Despite the ban, many people continued to consume alcohol. In fact, illegalization created a black market for alcohol, which then fuelled organized crime and gangsterism. Soon, it was clear that Prohibition was impractical and wasn’t meeting its goals, which was to prevent Americans from drinking alcohol.

The End of Prohibition

With no more Prohibition, the Twenty-First Amendment also stopped the federal government from controlling the manufacture, sale, and consumption of alcohol. This responsibility was left to the state governments.

Although the Twenty-First Amendment repealed the Eighteenth Amendment, it also banned the importation of alcohol into states that still had a ban on the trade and consumption of alcohol. Even after the Eighteenth Amendment was repealed, some states continued to prohibit the manufacture, sale and consumption of intoxicating liquor. These were known as the dry states and included Mississippi, Arizona, Texas, Utah, Nebraska, North Dakota, Oregon, Montana, and Alabama among others.

Mississippi was the last dry state to lift the ban on the consumption of alcohol. Although there are no more dry states today, some states still closely control the sale and distribution of alcohol.

As mentioned earlier, even after the Prohibition was repealed, states continued to ban the sale, distribution, and consumption of alcohol. But, as the years went by, more and more states began to relax their laws to permit the controlled sale of low alcohol content beer.

In particular, states began by allowing the sale and distribution of liquors with just 3.2 percent of alcohol. Until recently, in some states, this was the only type of alcohol that could be sold in supermarkets and convenience stores. If you wanted liquor with a higher alcohol percentage, you would need to get it from a state-licensed liquor store.

In a few states, 3.2 beer is the only type of alcoholic beverage that can be sold in grocery stores and supermarkets. In these states, other types of liquor such as wine or beer that have higher alcohol content are prohibited from being sold in public establishments such as groceries and supermarkets.

Also known as low point beer, 3 point 2 brew, or three-two beer, this variety of beer is mostly a relic of ‘dry states.’ In most other states that did not continue with the alcohol ban and were therefore known as ‘wet states,’ 3.2 beer was not really a thing because the alcohol laws in these states allowed public establishments such as drug stores, grocery stores, and even gas stations to sell alcoholic drinks. 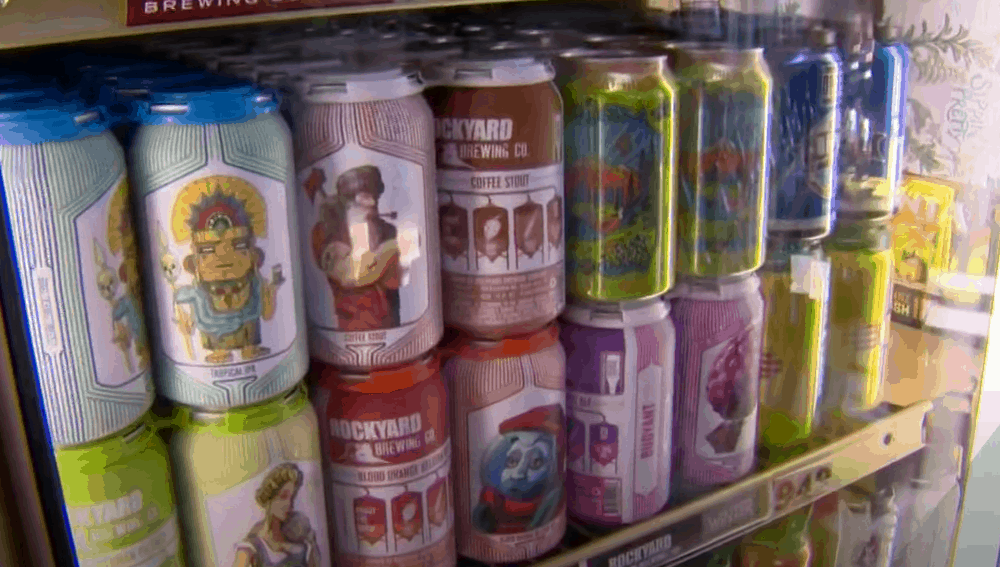 Why use AWB instead of ABV?

Well, as mentioned earlier, 3 point 2 brew came about in 1933 following the end of the Prohibition era. Then, states measured the percentage of mixtures such as alcohol by the weight of the mixture.

But, over the years food science and chemistry best standards changed so that it became apparent that using volume to measure the percentage of components in a mixture was more accurate than using weight.

After the end of Prohibition, states wanted to be careful when allowing the manufacture, distribution and sale of alcohol. They didn’t want people consuming too much alcohol and therefore opted to allow for the sale of beer that only contained 3.2 percent alcohol by weight, which was seen to be a low amount of alcohol that would not easily get people intoxicated. In fact, this drink was aptly referred to as a non-intoxicating beverage.

Over the years, when people have referred to 3.2 beer, what they have meant is a lightweight beer for amateurs or those who would rather keep things, well, light. Three point two brew has earned the reputation of being a low-point beer, meaning that it has a lower alcohol content than regular or standard beer.

What Is The Difference Between 3.2 Beer And Regular Beer?

Alcohol by weight percentage measures the weight of alcohol in a drink compared to the rest of the drink. On the other hand, alcohol by volume is the percentage of the drink that is alcohol.

Alcohol by weight is equivalent to 80 percent of alcohol by volume. So, if you were to measure 3.2 beer using ABV instead of ABW, it would be 4.0 percent ABV. Now, compare this to most standard beers whose alcohol content is about 4.2 to 4.5 percent and you will see that there really isn’t such a significant difference between the so-called low-point 3.2 beer and what is seen as high-point, regular beer.

So, if you are going to perceive three point two brew as a low-quality, weak or amateurish drink, then you would conclude the same for regular beer. Around the world, most people drink what is categorized as light alcohol i.e. drinks that are in the range of 3.7 to 4.5 percent ABV.

There is nothing wrong with lighter beers. In fact, these drinks tend to be crisper, more refreshing and no less satisfying.

In the 1930s states permitted the sale of 3.2 ABW beer as a compromise between allowing the population to consume alcohol and not.

Over the years, low point beer has been regulated out of existence and a majority of the states have done away with the cap that was once placed on the percentage of alcohol allowed in alcoholic drinks.

Indeed, in many states, it is now common for brewers to produce beer and other alcoholic drinks with an ABV content of as high as 9 percent or more if we were to consider artisan brewers.

The last of the states to finally do away with 3.2 beer include Kansas, Utah, Colorado, and Oklahoma. In these states and the others, grocery stores and supermarkets, which for a long time were prohibited from selling any other alcoholic drinks apart from three point two brew, can now sell regular alcoholic drinks.

Does 3.2 beer still exist? Yes, it does! As of 2021, Minnesota is the last state still requiring grocery and convenience stores to only sell 3.2 beer.

The history of alcohol sale and consumption is truly a fascinating one, as you have seen from learning about 3.2 beer. In the end, there isn’t much of a difference between the so-called low-point three point two beer and regular beer; the alcohol by volume percentage is more or less the same.

So, unless you live in Minnesota, you no longer have to worry about the difference between 3.2 beer or regular beer and whether you are missing out on the real deal.