The idea behind drinking games is … to get drunk. But unlike wine or spirits, beer is a more social beverage. So its drinkers are more likely to be … competitive. 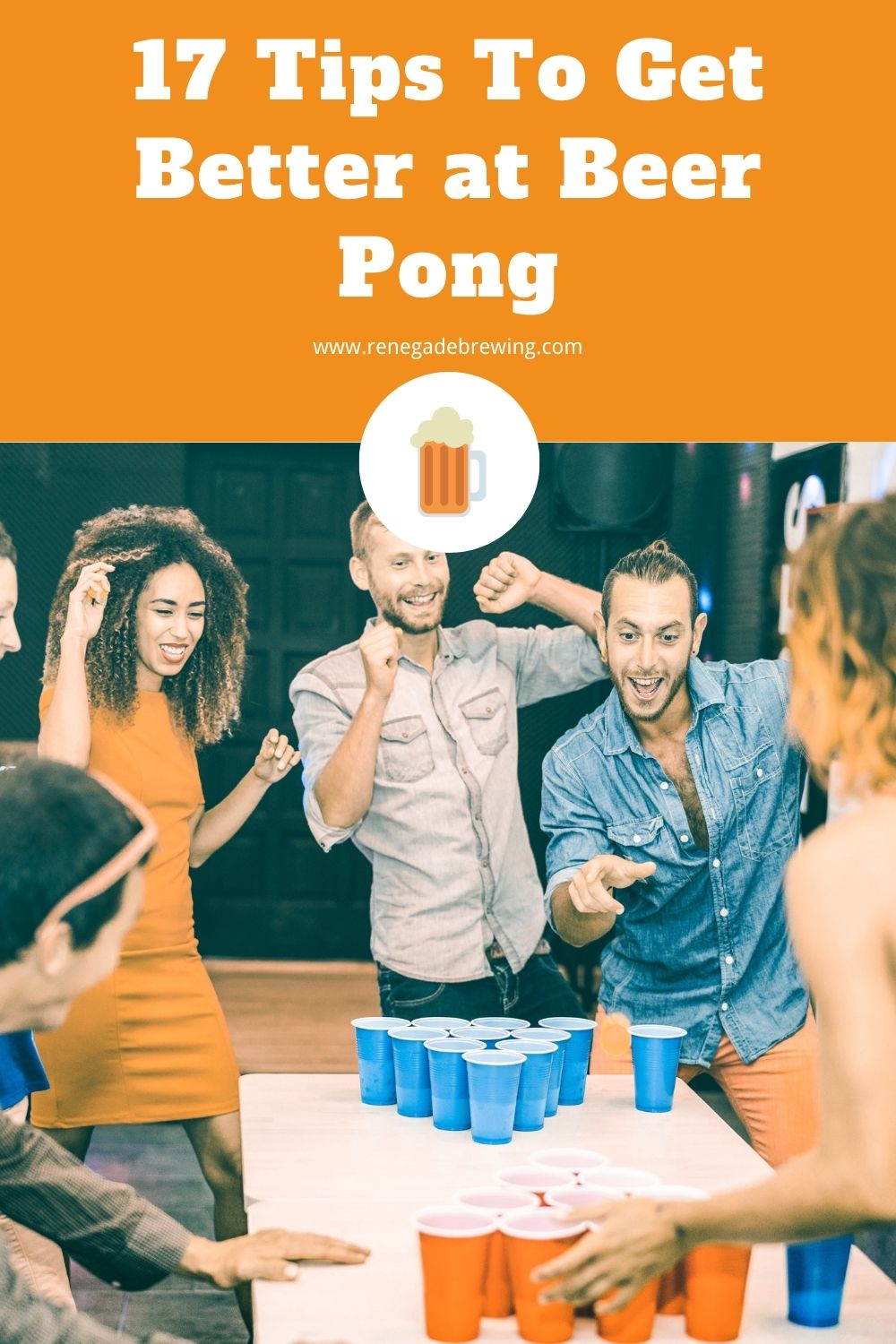 This means while beer pong is intended to be clumsy, awkward, and hilarious, it can get pretty intense. And players do want to win. So let’s explore some tips to get better at beer pong – preferably without throwing up!

Tip #1: Have a Hangover Remedy Handy

Beer pong is not a game for responsible drinkers. So if you’re the designated driver, stick to counting shots and refereeing.

Remember, the aim of the game is to get as drunk as possible while maintaining a straight aim.

So the better you shot, the drunker you’ll get. That’s the whole point. Having a hangover means you won, so be prepared for that before you touch that ball!

Basically, you ‘make’ by landing a ping pong ball in one of the other team’s cups. They then remove the ball and drink the beer. Eliminate all your opposing team members to win.

Tip #3: Get the Right Tools

You need party cups – preferably the red 16-ounce plastic kind. You need at least two ping pong balls, one for each team.

You can have a few extra ones because the balls are small and the teams are drunk, so they’ll probably get lost.

An 8-foot table is good, that’s the standard size for ping pong. You can have a couple of clear water cups for rinsing the balls when the beer gets blurry.

Or you can play 10-cup where cups are arranged 4-3-2-1. Some formations are way more complex so it’s your call.

Larger cups are better because your chances of a make a better, especially as you get drunker.

Yes, it’s a top party game. But people don’t generally clear the beer pong table until the party is in full swing.

So be wary of pro ping pong teammates that are a little too sober … they’ll spoil the game with trick shots when all you want to do is get drunk.

Also, don’t ask a couple to start you off. You’ll have them extending eye contact in their drunken haze and the game will never start.

How can you improve a game that involves throwing tiny balls while drunk? Up the stakes!

Deer Pong is a more family-friendly version where you don’t need to be drunk, but it’s certainly more entertaining trying to figure out the shapes and colors after a few beers.

Fear pong introduces some truth-or-dare. Both variants will have you playing more often, and practice makes perfect!

Every house party has a subset of rules. For some games, the loser has to drink all the leftover beers from both teams.

In others, if you make two shots in a row, the game resets. And of course, you have to put the cup away (and drain it) when a ball falls in the cup.

Two balls in the same cup automatically end the game. It also helps to pick a popular beer to fill the cups.

Yes, we are all wary of the pro player. But if you play beer pong a lot, it helps to have a few tossing tricks.

The main tosses are the high arc or lob, the underhand throw, the straight-shooting fastball, and the bounce shot that skips two or three cups before settling.

Some house rules allow leaning, others don’t. Try playing after meals to avoid getting drunk too quickly.

Why are you playing? Is it more for camaraderie, bragging rights, or just to get more drunk? The aim of the game will determine the length of the game.

After all, no matter how good your aim is, the game stops if no one else can throw.

So if you want a loner, more sporty game, fill the cups with minimal beer. But if this is stag night, fill it to the rim and pass out before round one.

Yes, you want to win the game. But you want to have some fun too. Shooting tricks are cool while sober, but they’re even more impressive with some alcohol in your system.

So beyond the three basic shots, try out some fancy finger work before the game. You can even have sub-sets of competitive throwing outside the main game.

Make it a best of three kind of thing. Then chug!!

If you’re reading this, you take your beer pong seriously. Meaning you probably practice before drinking to improve your game while drunk.

But try these grips after a few sips as well, just to be sure you can reproduce them while there’s booze in your body.

After all, it’s not beer bong if you haven’t drunk some beer … and it’s not nearly as fun to win the game while fully sober.

Some players consciously pick bad teammates. They want people who ‘let’ them drink by missing more shots than they make.

Other pongers are serious enough to insist on death cups and lefties. Play with (and learn from) these types of players if you want tips to get better at beer pong.

Avoid them if you’re a novice, if you’re scared to look dumb, or if you just want to drink.

Tip #13: Study Your Teammates Too

It’s not just the other team you can learn from. Beer pongers have basic ‘playing personalities’. These might be their normal characteristics. Or maybe they’re just quirks played up by alcohol.

Anticipate the kinds of patterns that come up with you mix small balls and big cups can help you drastically improve your game. After all, it’s not just the beer … it’s the people too. #LightTouch

There are millions of videos analyzing the stance of Tiger Woods, Pete Sampras, or Serena. But beer pongers have playing stances too. This may not seem relevant when you’re all drunk and keeling over.

But try to keep your feet firmly planted, roughly shoulder-width apart, with a slight bend at the knee. You want to keep your body balanced and avoid falling over, even while drunk.

Whether you’re doing a trick shot in a free-throw stance or an underhand while balancing on one foot, aim towards the back. This way, the ball might hit the rim and slip back into the cup.

You might even get lucky and do a bounce. Plus if the ball flicks the rear edge of the cup, it settles quicker. Meaning it’s less likely to spin long enough for your opponents to finger or blow it out.

This party game is mostly played by drunk amateurs. It’s meant to be light and fun. But since you’re looking for tips to get better at beer pong, try playing with paddles.

It forces you to focus more, whether you’ve had three sips or thirty. And it zeroes into aim and technique so you’re not aimlessly chunking the ball. But clear the room of breakables first – things are bound to get messy.

This should probably be the first tip. But we’re placing it at the end because this is more for professional players. Drinkers who take their beer pong to championship levels.

You’ll need to understand complex elements like roll-backs, redemptions, re-racks, and swatting. This is tournament-level knowledge, so if this is your thing, find your local beer pong circuit.

Grab a Beer and Get Ponging!

So what are our top tips to get better at beer pong?

What’s your best trick for improving your beer pong game? Tell us about it in the comments! 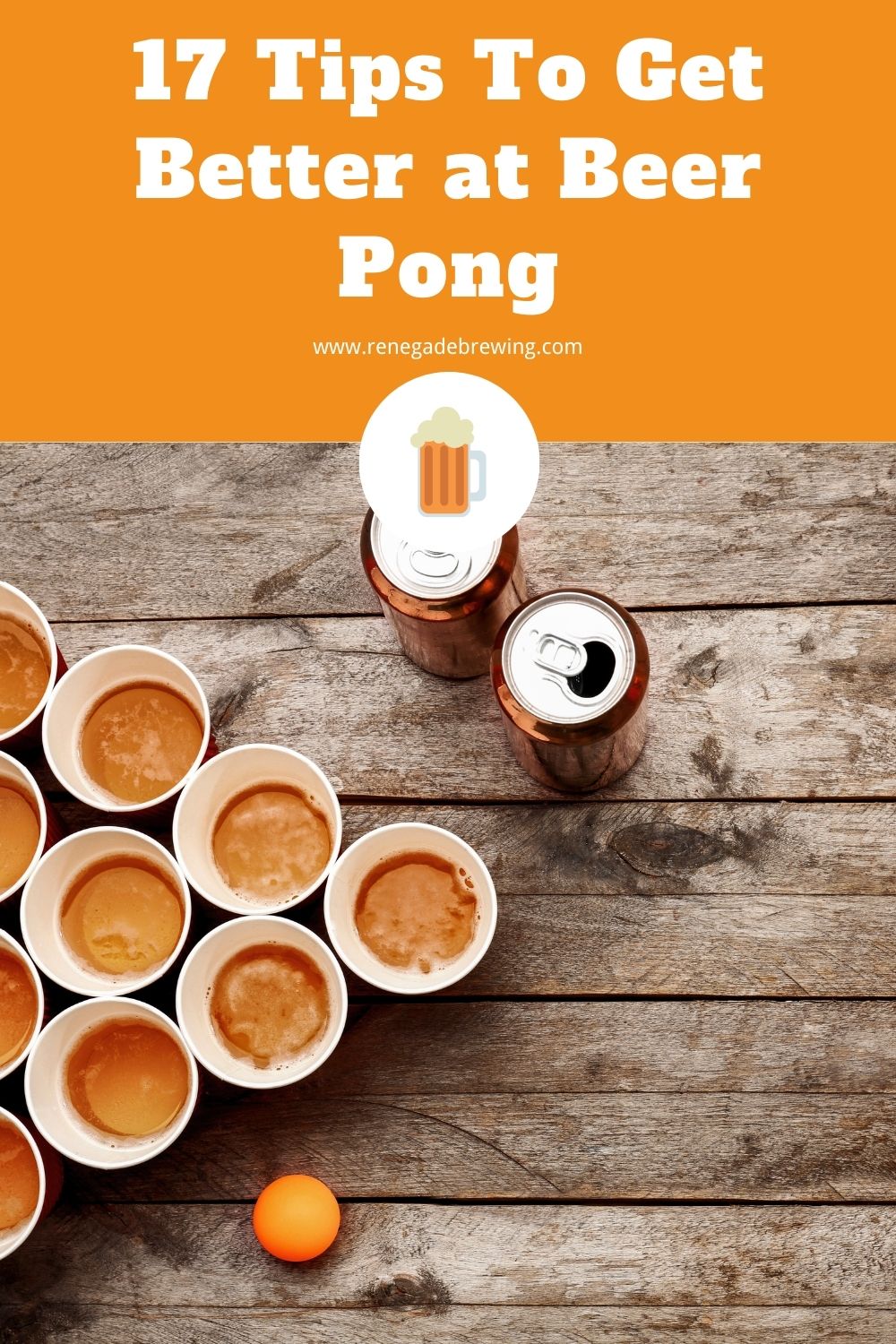