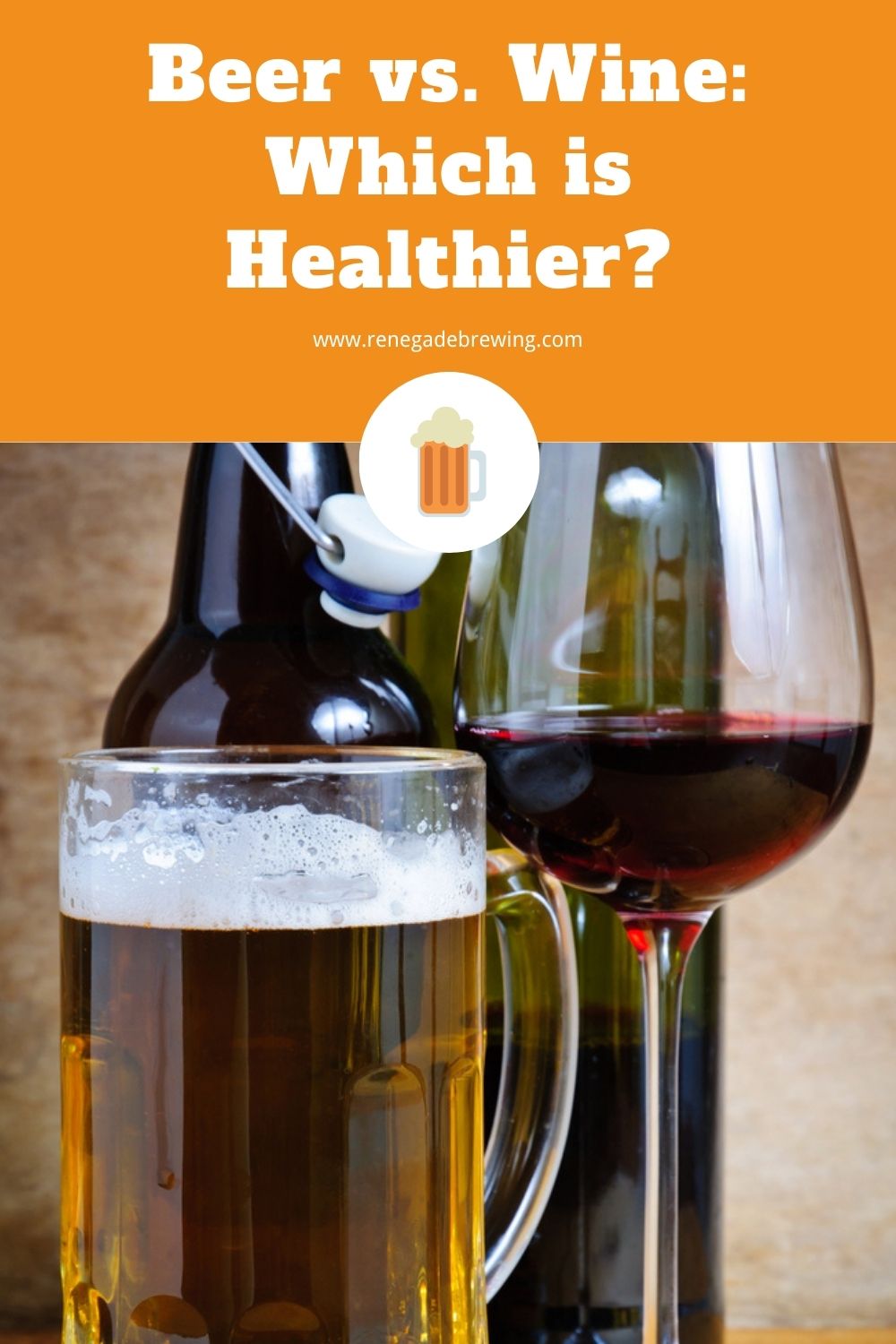 Sipping on some beer or wine can be a nice way to unwind or to make merry with loved ones. But, these two alcoholic beverages are a source of so much contention when it comes to their real health benefits.

Beerheads are firm in their conviction that beer is the truth while wine lovers believe that a glass a day keeps the doctor away. So which is healthier: beer or wine? Read on to find out.

Beer is commonly referred to as ‘liquid bread’ because it packs a punch where nutrients are concerned.

Your regular can of beer contains more minerals such as folate, phosphorous, niacin, vitamin B, and selenium than a glass of wine does. Beer is also packed with fiber and protein, all of which nourish the body.

Other potential health benefits of beer are that it is a source of silicon, which helps to strengthen bones and slows down the effects of common bone diseases such as osteoporosis.

In addition, beer contains prebiotics, which helps with gut health by promoting the production of good bacteria. Like wine, beer contains some amount of antioxidants, which combat harmful molecules known as free radicals.

Free radicals cause oxidative stress, which has been associated with several diseases such as cancer, heart diseases, type 2 diabetes among other serious conditions. Although beer and wine both contain antioxidants, more beer antioxidants than wine antioxidants get absorbed into the body.

The substances known as polyphenols are often cited when talking about the health benefits of wine. But, just like antioxidants, both beer and wine contain polyphenols but more so in red wine than in regular beer.

Polyphenols have been found to help dilate blood vessels, preventing low-density lipoprotein (LDL) or bad cholesterol from oxidizing inside these blood vessels. By preventing the oxidation of LDL, polyphenols can help to slow down cardiovascular diseases.

So, which one is more nutritious beer or wine? The verdict is that beer is the more nourishing drink of the two. Wine contains a higher level of antioxidants and polyphenols, which contribute to keeping at bay chronic diseases such as heart disease. But, beer is packed with more nutrient-providing ingredients such as protein and fiber, which we would typically get from eating food anyway.

When beer and calories are used in the same sentence, the first image that comes to mind is of a big, flopping belly. The beer belly is a real thing but there is more to it than just drinking beer.

Granted, the calories in beer can quickly add up. A glass of beer has about 180 calories, which is 50 percent more energy than one small glass of wine. These calories come from carbohydrates and the alcohol content in the beer and are commonly known as empty calories because these calories do not contain adequate nutrients needed for the proper functioning of the body.

Although beer contains carbohydrates, these do not offer the best nutritional value. In fact, the body often converts the carbs in beer into sugar, which is finally stored as fat. Beer might also contain simple carbs, which have a negative effect on blood sugar levels.

The upside is that not all beer is laced with a high amount of calories. More and more manufacturers are coming up with low-carb beers and light beers, which are good options for the health-conscious beer lover. If you want to keep your calories low, your best bet is to be choosy with the type of booze you opt for. Check the nutritional information on the bottle to identify low-calorie and low-carb beers. Generally, low-calorie beer tends to be low on carbohydrates.

Compared to beer, wine has a lower-caloric measure. In particular, white wines are lower in calories than red wine. So, next time you go wine shopping, you might want to skip the red wine and reach out for the sauvignon blanc instead.

Alcohol by Volume (ABV) is the percentage of alcohol in a given volume of an alcoholic drink. The reason why we bring up ABV when comparing which one is healthier between beer and wine is that the amount of alcohol in a drink is linked to the number of calories.

Both beers and wines with a high ABV will have a high caloric count and none of the two options will be any healthier. Brewers increase the alcohol volume in their beverages to boost flavor. If health is a concern for you, you can still enjoy a glass of your favorite wine or beer but opt for ones with a low ABV content.

Let’s take a quick look at some health benefits that beer might have over wine.

Advantages Of Beer Over Wine

Below are some of the main benefits that drinking beer might confer to an already healthy individual:

That said, there are some downsides to drinking beer that you should keep in mind.

Advantages of Wine Over Beer

Wine performs better than beer on some fronts. Some of these advantages are:

Difficult as it might be to believe, wine does have some downsides. Some include:

Beer and wine have their own advantages and disadvantages. While beer is packed with beneficial nutrients, a pint also contains significantly more calories than a glass of wine.

In addition to this, wine and beer contain antioxidants that can fight off disease-causing free radicals. But the antioxidants in beer are more readily absorbed into the body than those contained in wine.

Studies have found that drinking low to moderate amounts of any alcoholic beverage, whether that is beer or wine, can reduce the risk of cardiovascular disease and diabetes. These findings suggest that drinking patterns i.e. how much alcohol one drinks and not the compounds contained in the alcohol is what really matters when determining the health benefits of the drink.

In other words, it doesn’t matter the kind of compounds contained in beer or wine; your drinking pattern is what will have an impact on your health. Moderate drinkers of either wine or beer have been found to have a lower risk of heart attack compared to non-drinkers. Those who consume any of these drinks moderately but frequently, for example, four times a week are less prone to cardiovascular disease compared to those who drink fewer times in a week.

So, How Much Beer Or Wine Is Healthy?

According to the American Heart Association, keeping your alcohol consumption to 1-2 drinks and 1 drink a day for men and women respectively might help to reduce the risk of a heart attack. In addition to sticking to low to moderate alcohol consumption, adopting a healthy lifestyle is recommended.

Although consuming beer is often associated with the infamous paunch, this is not entirely true. Many beers do have a high number of calories but regularly eating unhealthy food, in addition to consuming a large amount of beer, will make you more prone to obesity. If you want to keep that extra tire off, drink your beer or wine in moderation but more importantly, try to stick to a healthy diet and exercise regularly.

Which is healthier: beer or wine? Wine does have its own benefits such as a low caloric number but beer takes the mantle where nutritional value is concerned.

The idea that wine is better for your heart and overall health is not entirely true—both beer and wine can confer some health benefits when drank in moderation by an already healthy person. 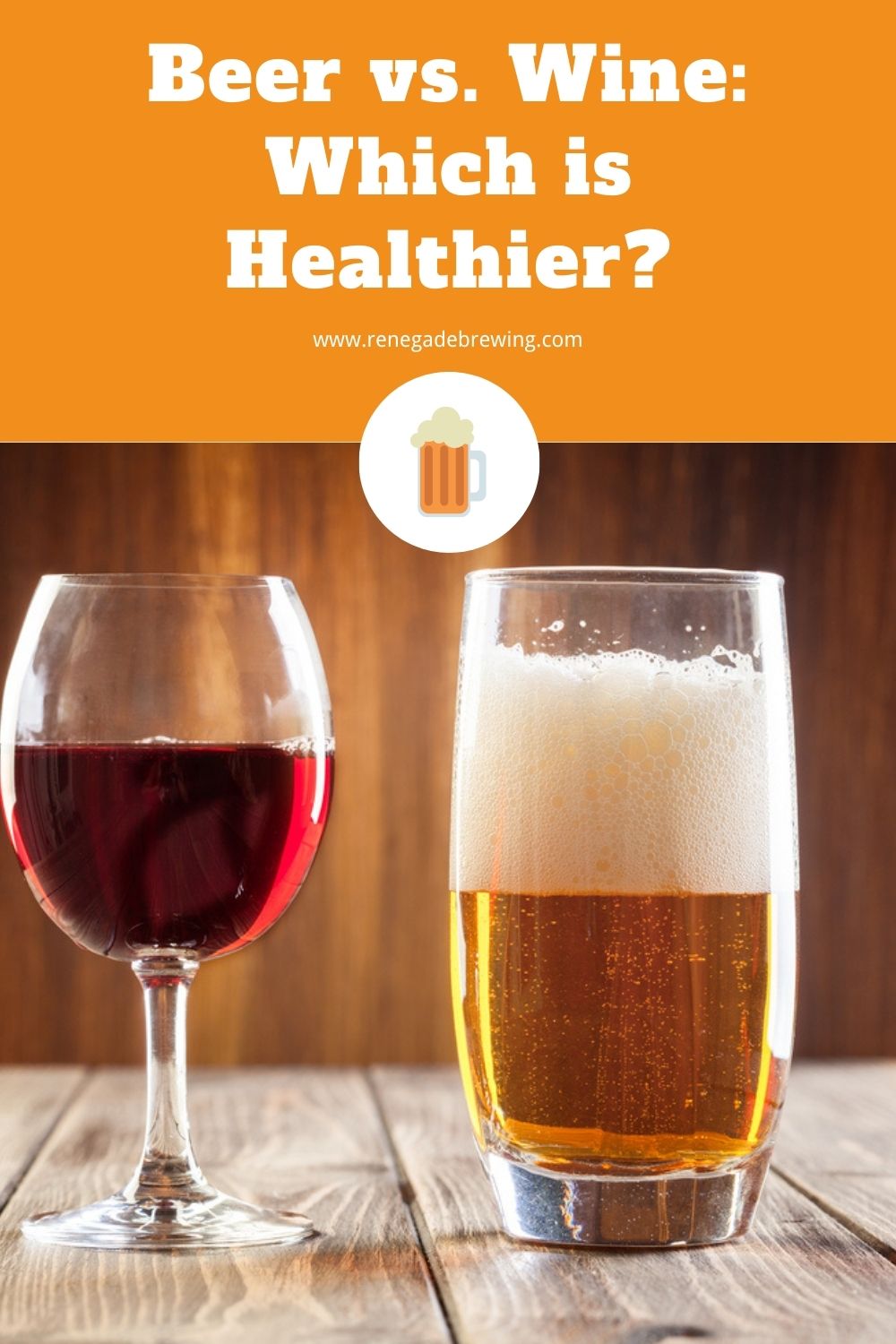 2 thoughts on “Beer vs. Wine: Is it better to drink beer or wine?”