In the old days, there was no piped water or sanitation system. We drank water from wells, rivers, or lakes. The same places where we cleaned things and bathed, so the water often made people sick. So people started drinking beer instead of water because it was safer.

Beer was different then. It was drunk warm and was heavy enough to substitute a meal. But in today’s Czech Republic, residents drink beer by choice. Because they like it. And they still drink more beer than any other country in the world! So let’s discover the best Czech beer. 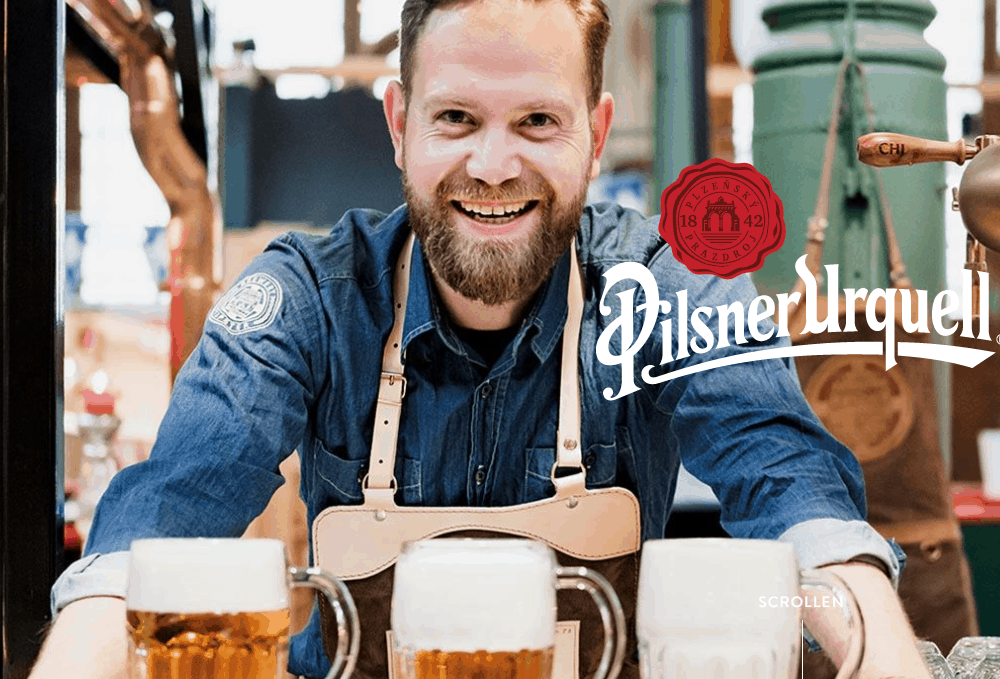 While this beer is sometimes listed as Polish, it’s currently brewed exclusively in Plzeň, a top Czech brewery. For a while, it was brewed in Poland and Russia. But the Czechs now own exclusive brewing rights. It’s considered the world’s first pilsner, invented by Josef Groll in 1842.  Pilsner is the planet’s most popular beer style – sessionable, light, and easy-drinking.

Urquell has an ABV of 4.4% with a thick, long-lasting head. And it gets even thicker depending on how you pour it. There’s an art to the angle and three distinct methods – sňyt, hladinka, and mlíko – according to the occasion. Urquell is triple-decocted (heating the Moravian mash three times), and is parallel-brewed with Saaz hops and soft water. 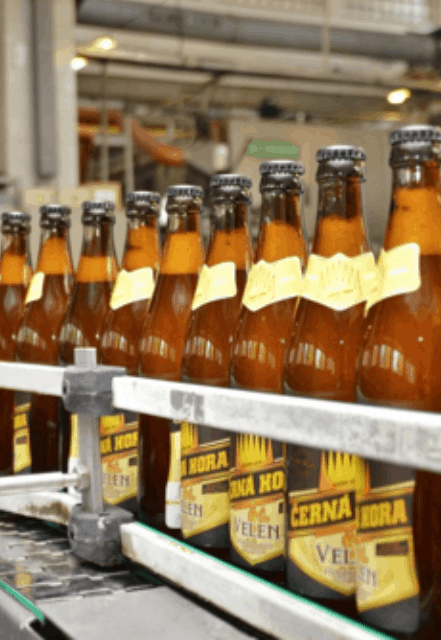 They say Czechs drink more beer than water. So it’s a good thing they brew it so well. Our second sample comes from one of Moravia’s oldest breweries, which opened in 1530. The phrase Cerna Hora means ‘black mountain’. So you might see it translated as Montenegro. And that can be confusing since Montenegro is a whole other country! But let’s get back to the beer.

Velen is a top-fermented hazy beer with an ABV of 4.8%. It’s built off unfiltered wheat malt – that’s what makes it cloudy. And it has an IBU of 16 with a distinctly yeasty aroma. The straw-colored beer has a thick, foamy head that fades fast. It has a fruity palate of banana and clove. There’s a bit of sweetness and spice in the beer, with a soft, fizzy mouthfeel. 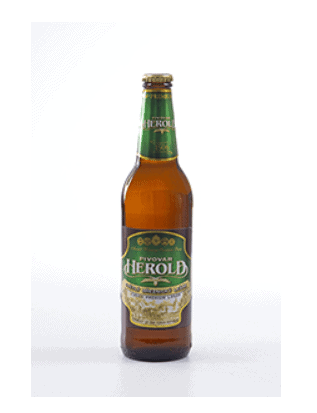 If you do the math, Czechs drink enough beer for every man, woman, and child to imbibe one 16-oz can per day. And they have very specific etiquette around toasting (eye contact and no crossing arms), serving (always use a coaster and get the foam right), and ordering (use your thumb, unlike that scene from Inglourious. Now let’s talk about this light-bodied lager.

It has an ABV of 5.2% and is hopped four times then cellar-aged for six weeks. It has a rich golden color, a bready aroma, and a mid-range bitter finish. It’s a geographically protected drink (from Březnice), just like champagne or grodziskie. Since 1999, it’s exclusively brewed at Herold Brewery. The beer uses Žatecký poloraný červeňák hop and local well water. 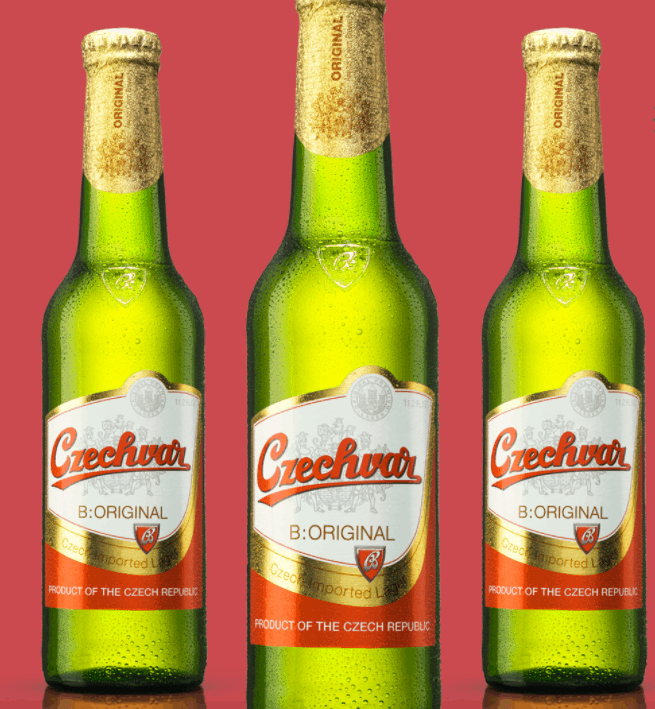 Budweis is the local name for České Budějovice, a city in the Czech Republic. So there’s some controversy around Czech Budweis and American Bud. But let’s dig into a different Czech beer that’s doing big in the states. Czechvar is the Budvar Budweiser brewed here, but it’s internationally sold under the name ‘Czechvar’ to avoid confusing it for American Bud.

Czechvar has an ABV of 5% and an IBU of 22. It’s brewed using Saaz American hops and local Moravian barley malts. The brewing water comes from icy ancient aquifers with in-house lager yeast. This is a slow-brewing cold-fermented beer that stays in its vats up to seven times longer than the average beer. It’s a hoppy beer with a thick head and a gold tone. 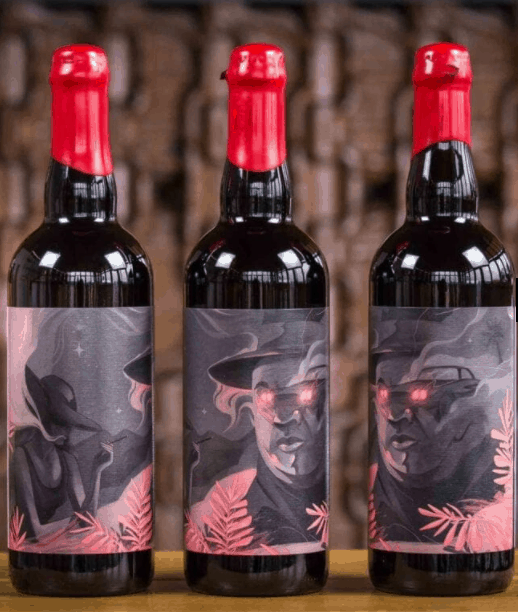 Have you noticed the best Czech beer has a degree sign instead of an ABV? Locals describe beers as 10s or 12s in reference to said degrees. It’s called the Balling Scale and the higher the degree, the sweeter the beer. As a rough guide, 10° beers have 3.5%ABV while 12° beers have an ABV of 4.2%. Speaking of which, this coconut stout has an imperial ABV of 14.5%.

It’s a dark blend of three individually brewed stouts. After brewing, the stout is aged for 18 months in barrels that previously matured bourbon. Then the pitch-black stout is passed over roasted coconut before bottling. It’s a sweet beer with a roasted palate and a mix of oats, wheat, and barley malts. Its head is thin but its aroma, flavor, and beer buzz are divine.

Kozel means ‘goat’ in Czech – which explains the hairy one on the label. The brewery has been around since 1874 and is currently owned by Asahi (Japan). Locals have curious ways of enjoying Kozel. Their darker beer can be served with barista-style cinnamon art. Or the glass can be rimmed with honey. You can also order half-and-half (dark and premium mix).

This last option can be a Kozel Cut (unmixed) or a Kozel Mix (fully blended). But we’re more interested in the lighter lager. The beer uses local Premiant hops and three types of malts. The beer has a pale gold color and an ABV of 4.6%. It’s a smooth beer with a thick head that doesn’t hold for very long. This warm buttery beer has hints of biscuit and fruit in its nose. 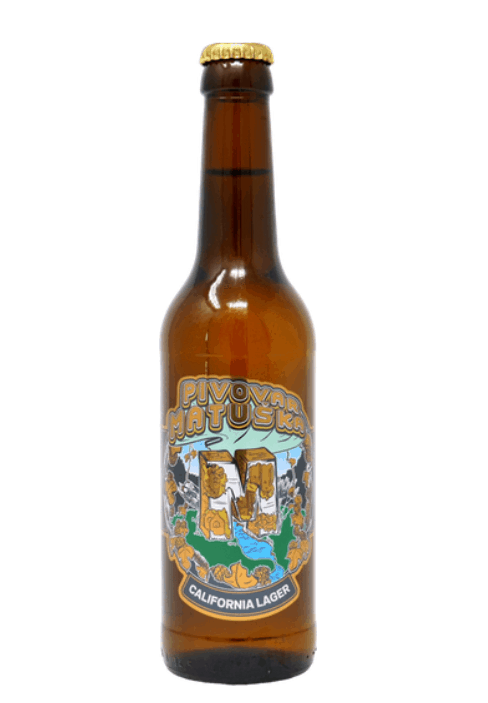 This beer has California in its name, so west coast fans are likely to enjoy it. This 12° beer is a craft lager from Matuška Brewery. It has an ABV of 5.2% and an IBU of 35. It’s slightly bitter and has a strong nose. Its malts are pilsen and caramel while its hops are cascade, citra, and local bohemian ŽPČ (Žatecký poloraný červeňák). It’s a seasonal bottom-fermented beer.

The brewery classifies it as APL (American Pale Lager?) but the use of American hops has it on the APA aisle. Also, in Matuška, it’s a brown-bottle beer but the export version is often bottled in green so don’t panic. This hazy beer has a citrusy nose with passion and grapefruit. It has a large, foamy head and a palate that leans towards malt and honey. It has a dry finish.

This beer has only been around since 1998 but it’s already made its mark. It’s the brand’s best-selling beer and one of the top movers in Czechia. The beer contains Saaz hops and hops extracts. It has an ABV of 4.8% and an EBC of 30. The palate is bitter but in a pleasant way. And it’s brewed in the traditional Czech way so it’s hopped four times and unpasteurized.

It’s an 11° beer and is lighter than other Czech beers. It has a thick head and a golden color. There’s a specialty version of this beer – Zámecký Máz – to launch Chateau Svijanský. It starts as a regular Svijanský Máz but goes through additional rounds of fermentation to krausen the beer. This takes two or three days before barrel-aging for three or four more weeks. 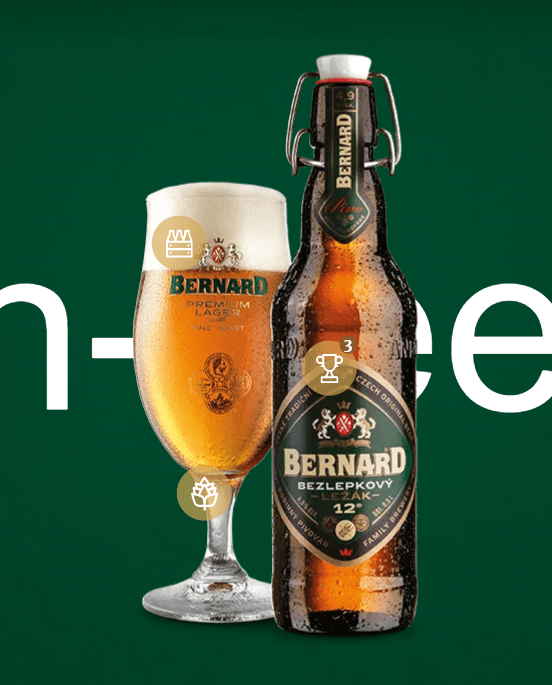 Bernard Brewery has been around since the 1600s but they didn’t start exporting beer until 2009. They have a wide range of beers from non-alcoholic plum brews to bohemian ale. We’re looking at their gluten-free offering since the anti-gluten movement has been huge for a while now. Bernard Gluten-Free Pale Lager has an ABV of 4.9% and an IBU of 37.

The beer has 45 calories in every 100ml of booze. Other nutritional specs per 100ml are 4.2g carbs, 0.7g protein, and 0.5g added sugars. The gluten levels are below 20ppm so they’re safe for Celiac diagnoses. The pale golden beer emits a thick head when you pour it right. This 12° beer has a swing-top – and that small touch may be enough to make you grab a bottle. Cool! 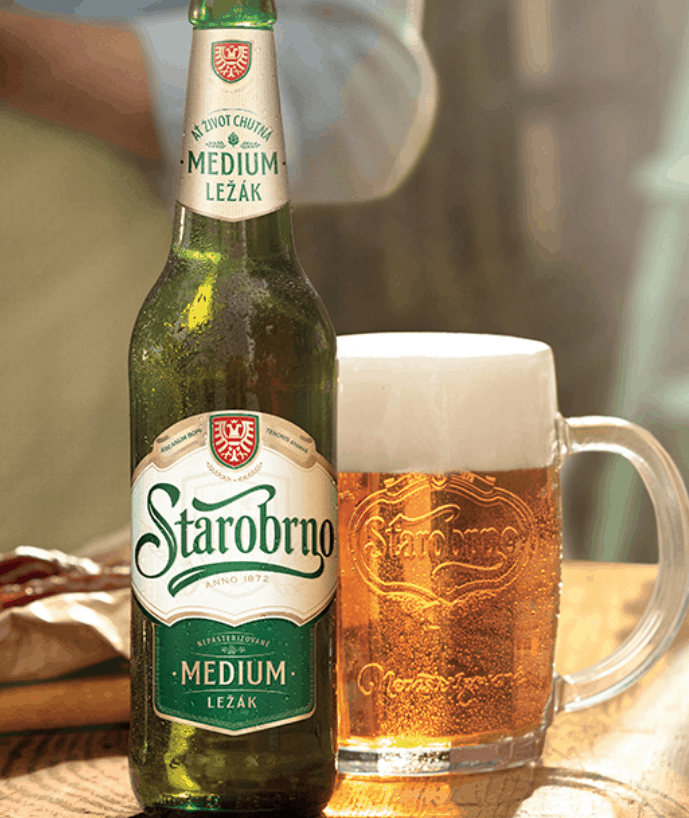 It’s interesting that other countries sometimes make products based on our palate preferences. Starobrno – for example – has a line of craft beers that seem tailored for the US. They include a red cheery beer, an IPA, and an APA. Their APA is their first-ever unfiltered beer, packed with American hops. But right now, we’re interested in the medium lager.

It’s an 11° beer with an ABV of 4.7%, an IBU of 26, and an EBC of 13. The beer is brewed using two-row Moravian barley malt and Satu Mare hops. Each 100ml carries about 40 calories. The color is slightly darker than most lagers but it doesn’t quite get to amber. It has a thick, stable head. Its malts overshadow its hops but it’s still a balanced beer. 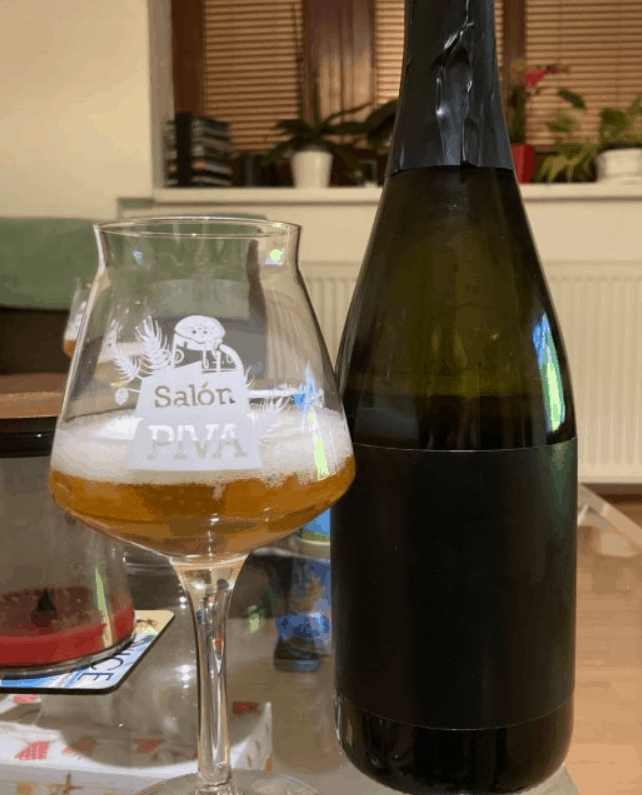 Yes, the #3 matters because Raven Black comes in various numbered flavors. #3 is a Champagne Strong Ale … and you know zymurgists don’t take that word lightly. No, this beer doesn’t have French grapes … but it’s brewed using champagne yeast with Nelson Sauvin Hallertau Blanc, making your beer delightfully effervescent and producing a soft mouth-feel.

And just like champagne, #3 is fermented twice. First in the barrel with oak shavings and sugar … then it’s bottle-conditioned before serving. You’ll need to shake it before popping, to evenly distribute the yeasty sediment. Open it carefully because unlike champagne, you want some of that foam ending up inside your glass. Its ABV is 10.5%, its IBU is 15, and it’s 22°. 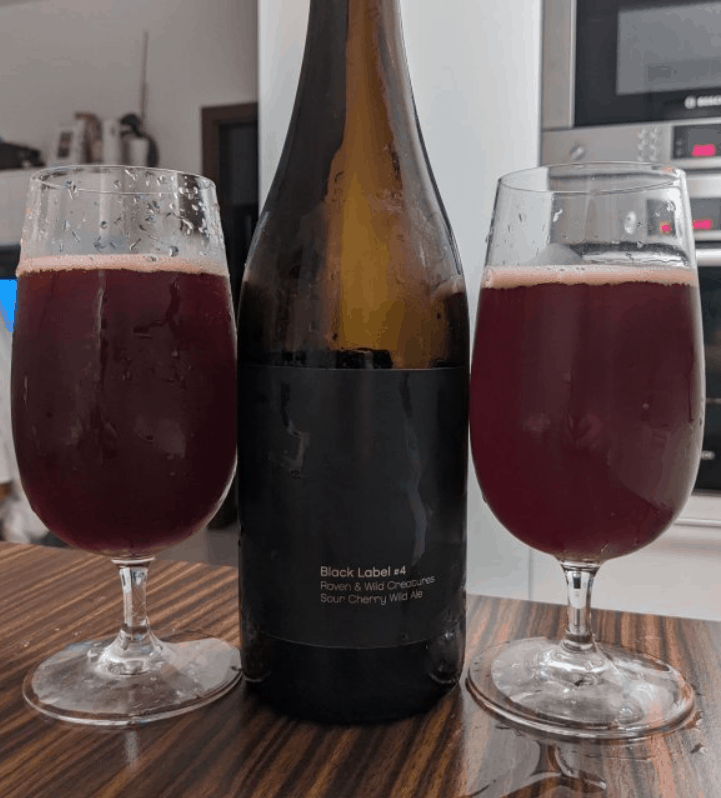 This beer is way too American to be ignored. Plus, if you’re a novice, it’s a familiar introduction to Czech beer. It might even be the best Czech beer for the uninitiated. It’s a red sour beer cherry beer that’s classified as a wild ale. The ABV is 8.1% and its IBU is 20 with a Balling Scale Rating of 15°. The brewers are pretty proud of this one – it’s a complex brew.

The beer (officially branded as a Sour Wild Cherry Ale) is brewed in 14 separate oak barrels for half a year. These barrels previously held red wine so your beer inherits a vinous quality. These barrels are then mixed together to create the perfect blend before fermenting the concoction again. The second round of fermentation uses sour Moravian Fanal cherries. 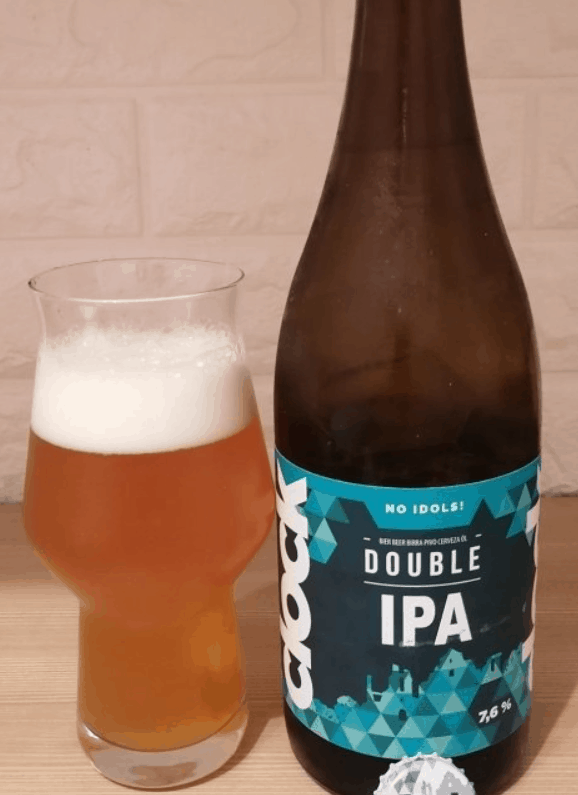 This phrase doesn’t make much sense in English. So we’re going to assume something got lost in translation. At least we’re sure Clock is the name of the brewery. That said, this 15° beer has an ABV of 6.5% and an IBU of 55. It’s a gold-colored APA whose EBC is 8. And before you panic, the calorie calculations (2,340) are based on a 1-liter bottle (almost 34 oz)

That’s 3 or 4 cans’ worth. And it’s top-fermented with HB 366 aka Equinot aka Ekuanot hops and Mosaic hops. The beer has a thin head with good retention. It offers a lingering aftertaste of forest fruits, citrus, and tropical flavors. These include passion, cranberries, cinchona, and strawberries. The beer also has a mildly herbal nose and a deeply malty palate. 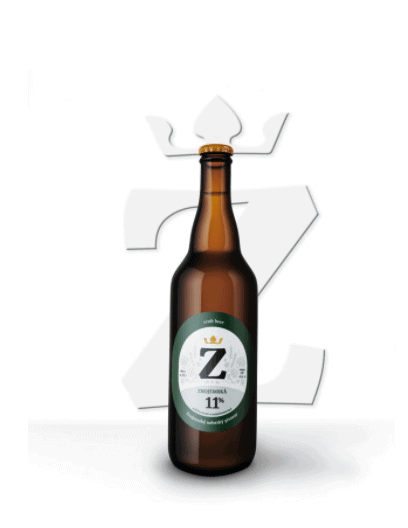 Znojmo comes in five varieties (three 11s, a 12, and a 14). but they all use open fermentation methods. The beers are classified as pilsners but they’re brewed in lager vats so they get that bready flavor. After brewing, these beers will sit in the cellar at least 6 weeks before bottling. The pivo we’re featuring today is the 11° Rotunda beer with an ABV of 4.5%.

The label is brown and the beer has an IBU of 20 and an EBC of 26. It’s a cloudy beer – both unpasteurized and unfiltered. This lager’s color flows towards amber. (It’s defined as semi-dark). Rotunda is malted with Pilsen, Melanoidin, and Caramel barley. Its hops are ZPC and Sladek, giving the beer a slightly hoppy nose and a heavily malted 53-calorie mouthfeel. 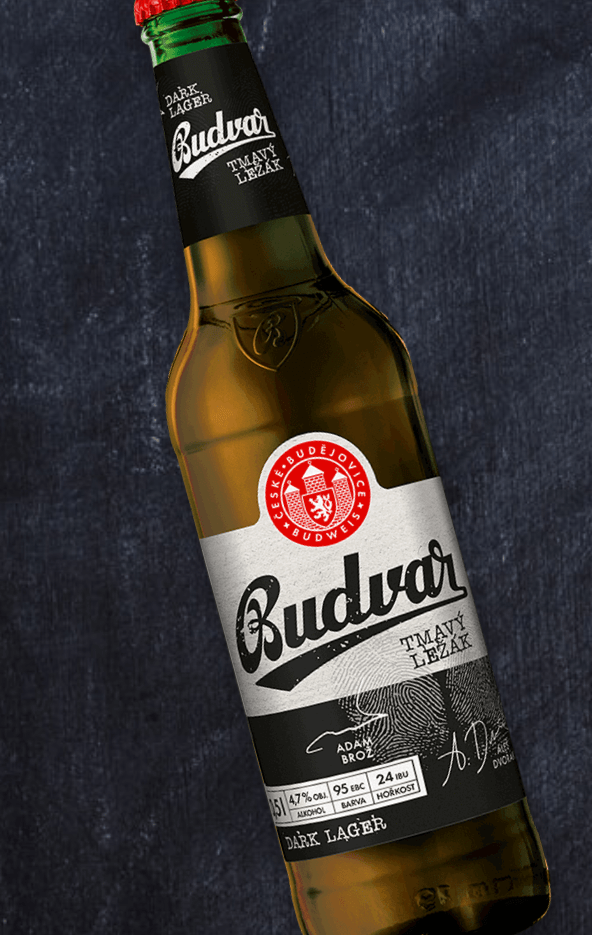 We close our list with one of those geographically protected beers. Except this one is a little different because it’s the brewing water that needs verification. To qualify, it must be drawn from the České Budějovice Basin. The basin has an underground lake whose water is mashed with Moravia barley and ZPC hops. This amber lager has an EBC of 90 and an IBU of 24.

Where did you sip the best Czech beer? Tell us in the comments and we just might pass by!