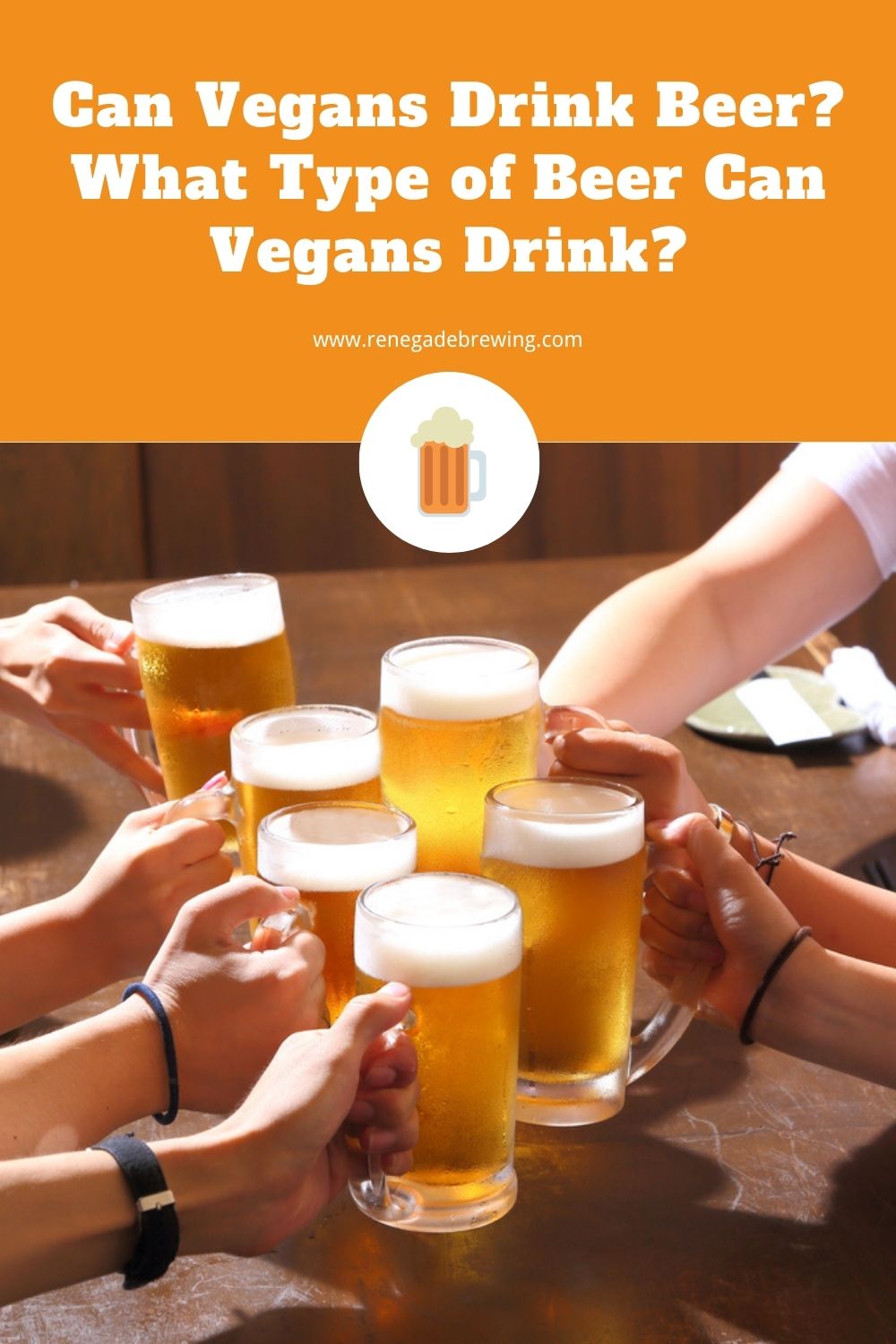 Are you a vegan who wants to enjoy some good old beer? Vegans can drink beer but telling which beers are free of animal products is not always easy.

A good place to start is to learn about the non-vegan ingredients to look out for so you can make an informed decision about the right beer for you.

Before finding out whether vegans can drink beer, let’s learn a bit about what goes into making beer. The basic ingredients used to make beer are water, yeast, hops, and barley. Yeast converts the sugars contained in the barley into alcohol and carbon dioxide through a process of fermentation to produce beer ready for packaging and distribution.

In addition to these four basic ingredients, manufacturers also add finings. These are agents used to remove impurities so that the final product is a beer with a bright, clear, crisp appearance.

Finings are added at the end of the brewing process. This is known as fining and it results in a clearer, brighter beer. Fining also makes the beer-aging process shorter by removing components that can potentially destabilize the flavor of beer.

Shortly after beer is brewed, it will appear hazy. While there is nothing wrong with cloudy beer, most of us are used to drinking clear beer so manufacturers add these ‘clearing’ agents to remove the haziness.

Fining agents are eventually filtered out but some particles might be left behind in the beer. The downside is that most of these clearing agents are non-vegan, therefore making the beer they were added to unsuitable for vegan consumers.

Common finings used in the manufacture of beer include:

Although beer is primarily made using vegan ingredients, some of the finings added to beer come from non-vegan sources. Beers that contain any of these ingredients are unsuitable for those who identify as vegans. Let’s talk a bit about these ingredients.

Isinglass is harvested from the gas bladder of fish and is dried in the sun before being distributed to manufacturers who then add this substance to beer.

Gelatine is derived from boiling animals’ bones, skin, and tendons. Brewers often add this protein during the fermentation or after the beer is already stored in kegs and is ready for consumption.

If you thought glycerine is a plant-based ingredient you are not alone. Lots of folks assume that glycerine is extracted from plant oil only but the truth is some types of glycerine are also extracted from mutton or beef fats but you will obviously be unable to tell the difference. As such, you are better off avoiding beer that contains glycerine if you want to stick to only vegan options.

Casein is a milk-based ingredient and is therefore a non-vegan addition to your beer or wine. On the upside, because many people are allergic to this ingredient, manufacturers will usually indicate that the beer contains casein.

If you are unsure whether a particular type of beer is vegan, you can check the ingredients list to see if it contains non-vegan ingredients. It is often better to identify beers that do not contain non-vegan finings than to look for those that contain these ingredients.

However, this is easier said than done given the fact that beer manufacturers are not required by law to list the ingredients contained in their beer. This can make it quite challenging to know which beer is and isn’t vegan just by looking at the ingredients list on the bottle.

Which Beers Can Vegans Drink?

So, can vegans drink beer? The answer is yes, as long as you are careful to check the ingredient list on the beer bottle to confirm that the drink does not contain non-vegan ingredients that are unsuitable for a person who strictly doesn’t consume any animal products.

Vegan beer sounds like a new trend or fad but the truth is, there are many vegan-friendly alcoholic drinks already in the market from which to choose. More and more manufacturers are rising to the occasion to meet the growing demand for organic and vegan alcoholic drinks.

And, as we continue to become more health-conscious and adopt a more ethical lifestyle, there will be even more vegan beer options from which to choose as manufacturers try to meet the demand for specialty beer. In fact, major brewers such as Guinness are already producing 100% vegan-friendly beer, which is definitely a step in the right direction.

Another positive is that brewers are now using modern machines to filter and clarify their beers. The use of finings to clarify alcohol is slowly becoming an extinct practice. The exception might be with craft breweries that like to keep their drinks as natural as possible and may therefore not filter their beers. Brewers that continue to filter their beers are opting for vegan-friendly finings.

So, what type of beer can vegans drink?

The truth is, many beers on the market are vegan. As such, it is easier to identify the types of beers that vegans cannot drink than to produce a list of those that they can.

Vegans can drink anything from lagers to ales and even stouts. That said, the following beer styles are often unsuitable for those who have adopted a vegan lifestyle:

Examples of beers for vegans include:

Vegan stouts: Stouts are known to contain milk lactose but the vegetarian options are made without this ingredient. Vegan stout beers to choose from include Goose Island, Sierra Nevada Stout, and the Speedway Stout by the AleAmith Brewing Company.

Lagers: If lagers appeal more to you, you may opt for the likes of Ice Draft Light, Carlsberg, Budweiser, Yuengling, and Michelob Light, and many more.

As we have seen, vegans can drink beer. Although some brewers still use the old practice of clarifying beer using animal-based finings, more and more are moving away from this practice to cater to the needs of their vegan customers.

If you are unsure whether a type of beer is vegan-friendly, check the ingredients list for agents such as isinglass, gelatine, glycerine, and casein. Other non-vegan additions include egg whites, milk, and honey.

If possible, you can reach out to the specific manufacturer of your favorite beer and find out if they have vegan-friendly offerings—you might be pleasantly surprised that many do offer delicious vegan beer.

Do you have a favorite vegan beer? Have you discovered new vegan-friendly options? Share with us—we’d love to hear from you! 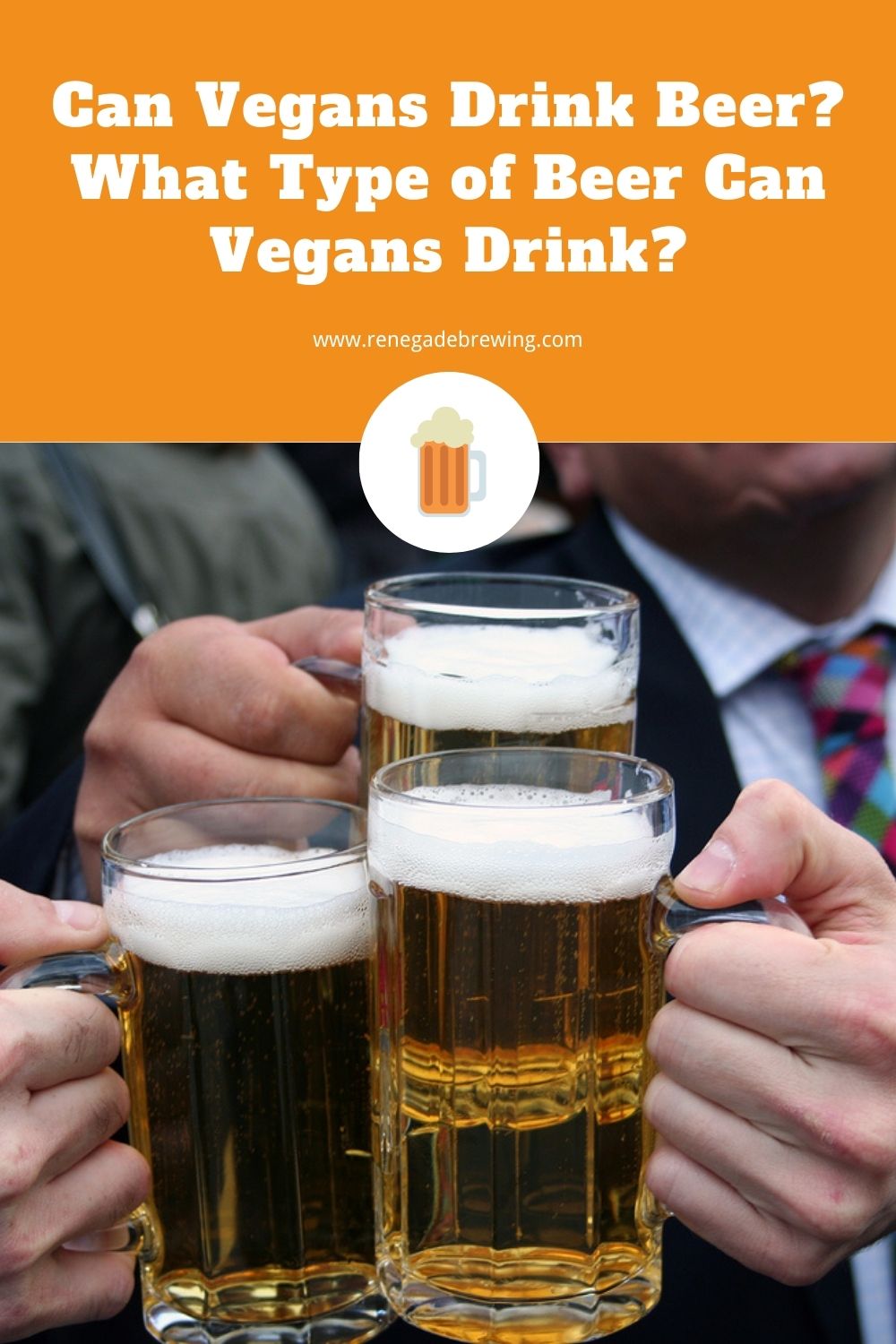