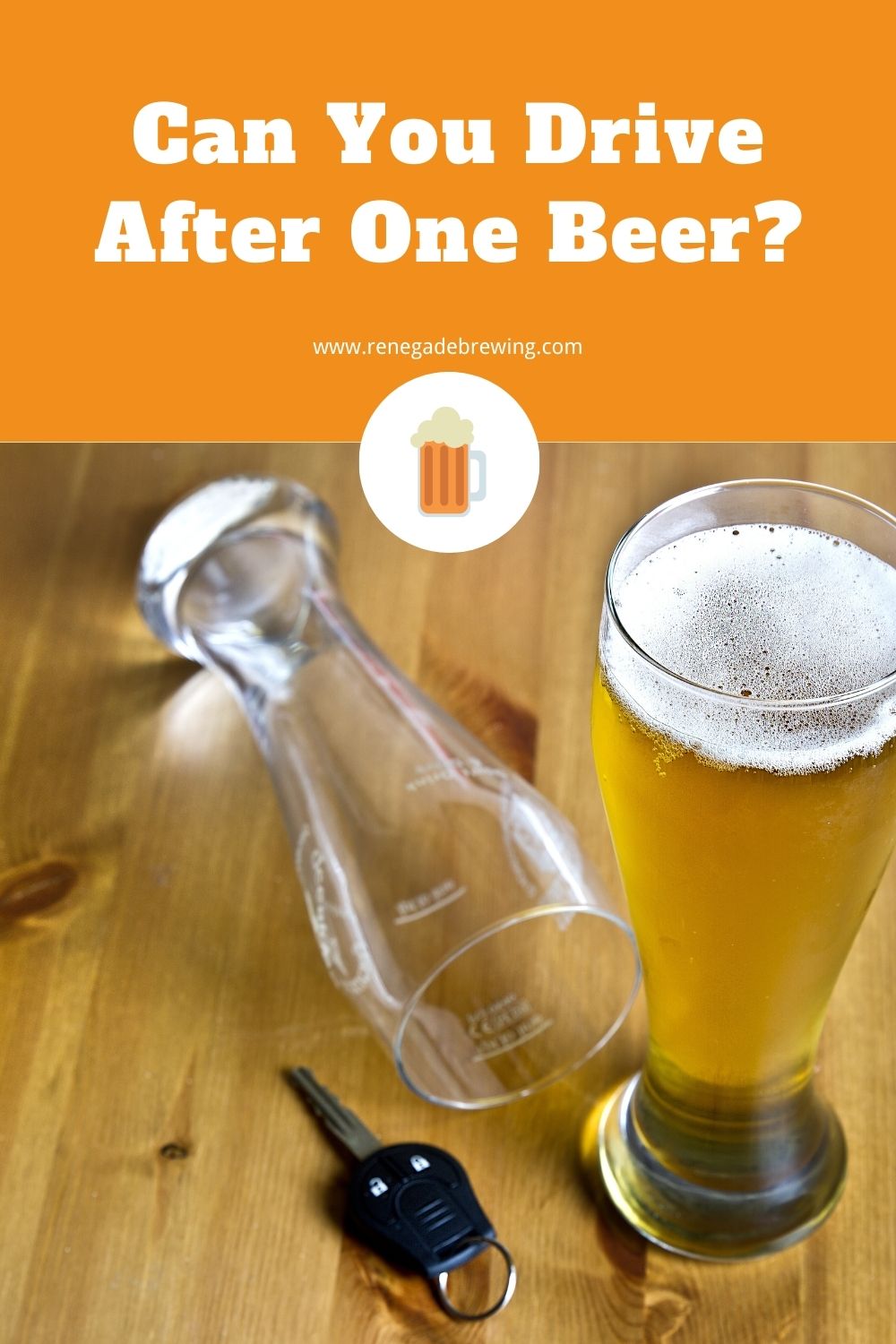 Everyone knows that drinking alcohol and driving is a bad combination. But if you have a drink at lunchtime, is it ok to get back into your car? What if you’ve gone to a bar after work, but haven’t had much to drink?

With different levels of alcohol in different drinks, knowing how much will impair your reactions and judgment can be difficult. Generally speaking, though, there’s less alcohol in beer than in wine or spirits. So can you drive after one beer?

The Impact of Alcohol on Driving

Let’s start by taking a look at why this matters.

Drinking alcohol affects your body in all kinds of ways that in turn affect your driving. And you don’t have to be falling down drunk for that to happen. Even relatively small amounts of alcohol will have an impact.

Your judgment gets worse. You may take risks you wouldn’t take normally.

Or if you’re worried about having drunk alcohol, you can become excessively cautious. That might sound like a good thing – you’re being careful, right? But it can cause problems for other drivers if you don’t react to road conditions in the way they expect.

Your concentration suffers too. Even just a couple of drinks will affect your ability to carry out two tasks at once – like steering and braking.

And alcohol can also impair your eyesight. Drinking larger amounts can result in blurred or double vision. But even small amounts will affect your ability to track moving objects.

That could mean that you don’t accurately judge your distance from other vehicles. Or that you fail to spot hazards, like a child or animal in the road.

The Results of Drink Driving

All this means that driving after you’ve had alcohol is a very bad idea. And the results can be catastrophic.

In the USA in 2016, nearly 10,500 people died in accidents where someone driving had been drinking alcohol. That’s well over a quarter of all deaths on the roads.

And all too often, children suffer the consequences of adults drinking. In the same year, 214 children in the USA died because someone had chosen to drive their car after drinking alcohol.

If there isn’t an accident, but you’re caught driving over legal limits, you can face serious penalties. In the USA, these range from having to attend treatment programs to mandatory jail time.

What is the Legal Alcohol Limit for Driving?

Knowing how much alcohol you can consume before driving isn’t easy.

In the first place, the limit applies to the amount of alcohol in your blood. It doesn’t apply to the amount in your glass, can or bottle. The measurement is known as your blood alcohol concentration, or BAC.

Even if you know how much alcohol is in your drink, you won’t know what that means for your BAC. That’s because everyone’s body is different, and metabolizes alcohol at different rates. And that can also be affected by factors like whether you’ve eaten food alongside your drink.

Legal BAC limits vary by country. In the USA and most of the UK the legal limit for driving is a BAC of 0.08%.

But in the USA, that only applies to drivers over 21 years old. The limit for younger drivers is much lower, and varies between 0 and 0.02%, depending on which state you’re in.

Limits in other countries are lower too. In Scotland and most European countries it is 0.05%, and in Sweden it’s 0.02%.

So Can I Drive After One Beer?

All this variation means it’s not easy to answer the question of whether you can legally drive after one beer.

The answer will depend on which country you’re in. It will also depend on how long before driving you had the beer. And on how large the serving was, and how strong it was.

Remember, beers can contain anything from 3 percent to over 11 percent alcohol. And the serving size can vary from a 330 milliliter can to a 568-milliliter pint glass.

Your BAC will depend on your body too – and on how it’s functioning that day. Have you eaten alongside your beer? Have you drunk lots of water too?

If you want to stay on the right side of legal drink-drive limits, firstly make sure you know what they are. Then check how strong your drink is by looking at the alcohol by volume figure on the label. And if you’re buying a drink at a bar, ask them for the ABV of the beer they’re serving.

In the US, a reasonable rule of thumb is that you can have three 12-ounce servings of normal strength beer, and remain under the limit. By normal strength, we mean beer with an ABV of about 5%.

But that doesn’t mean you’ll be as good a driver as you were before you drank those three beers.

But I Want to Know For Sure Whether I’m Under the Limit! 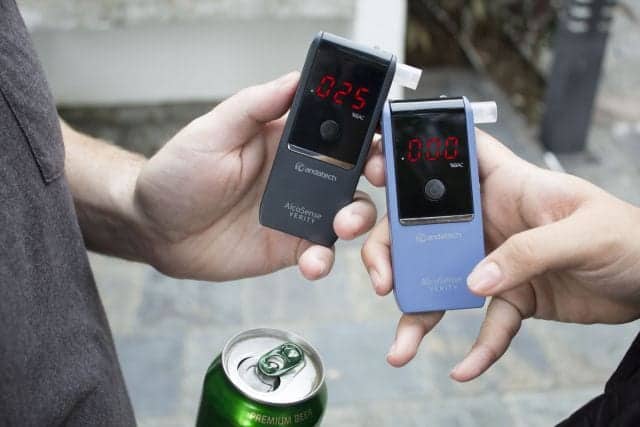 There are two good ways to know for sure that you’re under the legal BAC limit before driving. The simplest and best is to avoid alcohol altogether.

But if you really want a beer, you can check your BAC yourself before you get behind the wheel. A number of self-testing kits are now commercially available.

If you want to invest in one of these, do your homework first. In some cases, an alarm sounds when your BAC is over a pre-set limit. So make sure the kit will work with the limit that applies where you live.

Check how to use it, and how accurate it is. If you’re relying on it to tell you whether you’re legally okay to drive, you need to know it’s right.

But remember – being below the legal limit isn’t the same thing as being safe to drive.

Legal Limits and the Effects of Alcohol

In places where legal alcohol limits are higher, your driving can be significantly impaired whilst you’re still under the limit.

With a BAC of just 0.02%, it’s typical to experience a loss in judgment and to become more relaxed. Your ability to track fast-moving objects with your eyes gets worse. And you’re less able to carry out two functions at the same time.

Imagine what that means for driving. You’re less likely to be able to see where other vehicles are going. If they swerve, you’ll be less able to react in time to prevent a collision. And braking and steering at the same time – for example, to avoid an obstacle – will be much harder.

That’s why countries like Sweden have a BAC limit of 0.02%.

At 0.05%, the limit in most other European countries, those effects become stronger. Your coordination will be worse, and you’ll find steering more difficult. And if you face an emergency situation, your ability to react to it quickly will be much worse.

Err on the Side of Caution

Driving a vehicle means you’re in a very responsible position. Other people’s health and even their lives are in your hands. If something goes wrong because alcohol has impaired your judgment or slowed your reaction times, the consequences can be disastrous.

You too could be killed or left with injuries that change your life forever. Or you could have to wake up every day knowing that you’ve done that to someone else. And you could lose your job, your friends and your family. Is that one beer really worth all that?

So don’t take risks. If you’re not sure whether you’re safe to drive – don’t get behind the wheel.

And remember: feeling fine to drive doesn’t mean that you are. Alcohol makes us poor judges of risk. We can feel invulnerable, sure that everything will be just fine. But that feeling will be gone in a second if there’s an accident.

If you’re going to be driving, why not switch to a non-alcoholic beer? There are some great options on the market now, so you don’t have to feel like you’re missing out. And you’ll be able to drive confident that your reactions are as fast and accurate as they ever were.

How much beer you can legally drink before driving a vehicle varies according to a whole range of factors. If you want to be sure that you’re under the legal limit, the safest way is to switch to non-alcoholic beer.

Alternatively, you can invest in a self-testing kit. Just check the specifications and reviews. You need to be sure it will work with the limits where you’ll be driving. And you need to be completely confident that it’s accurate.

Finally, if you’re in any doubt whether it’s safe for you to drive, don’t do it. You’re more likely to make the wrong call after you’ve had a drink – and it’s just not worth the risk. 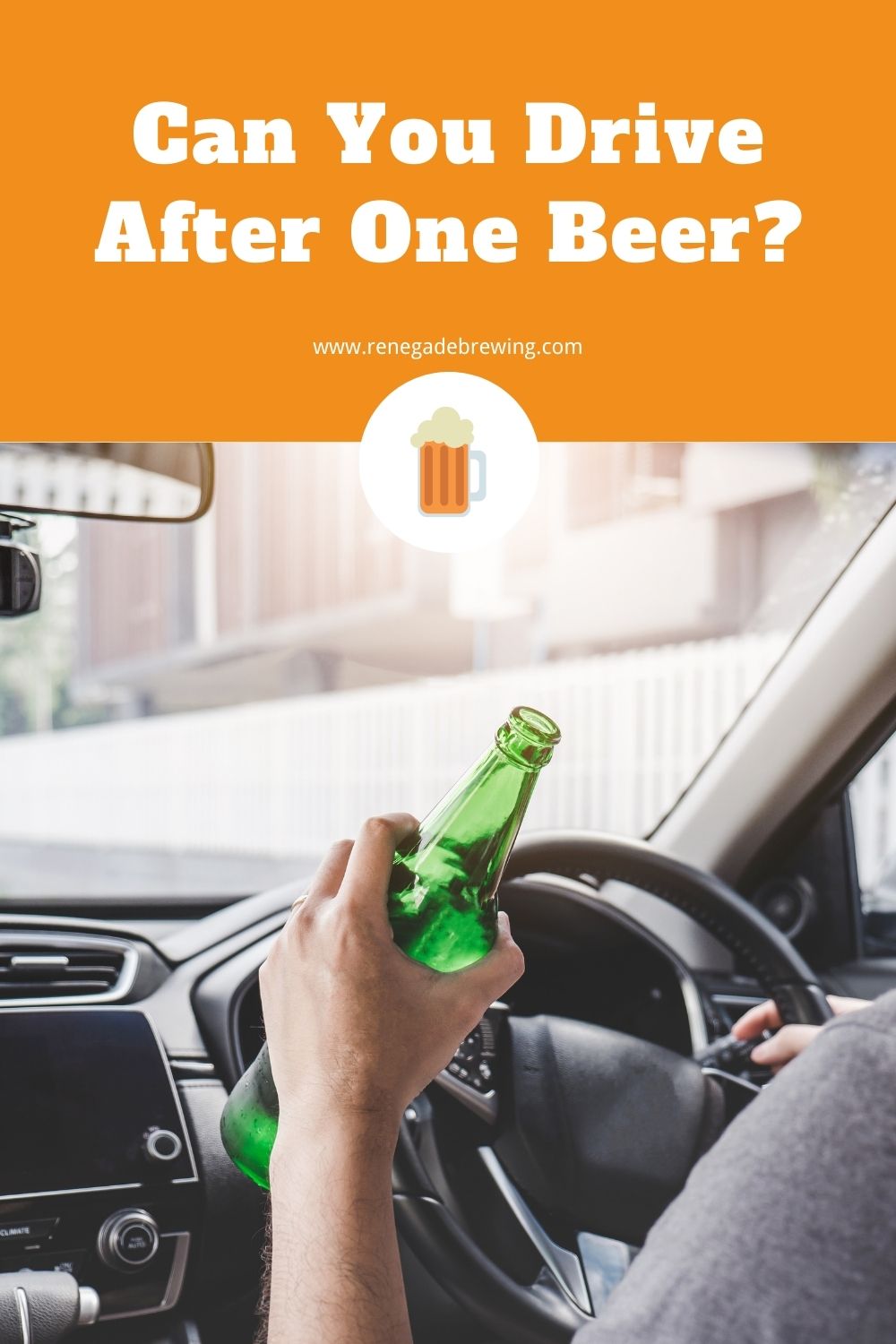