Corona is a premium, pale lager beer you simply can’t drink without a lemon slice, just like gin, tonic, or tequila. In fact, you can see either a lemon or lime wedge in almost every Corona beer commercial and poster. 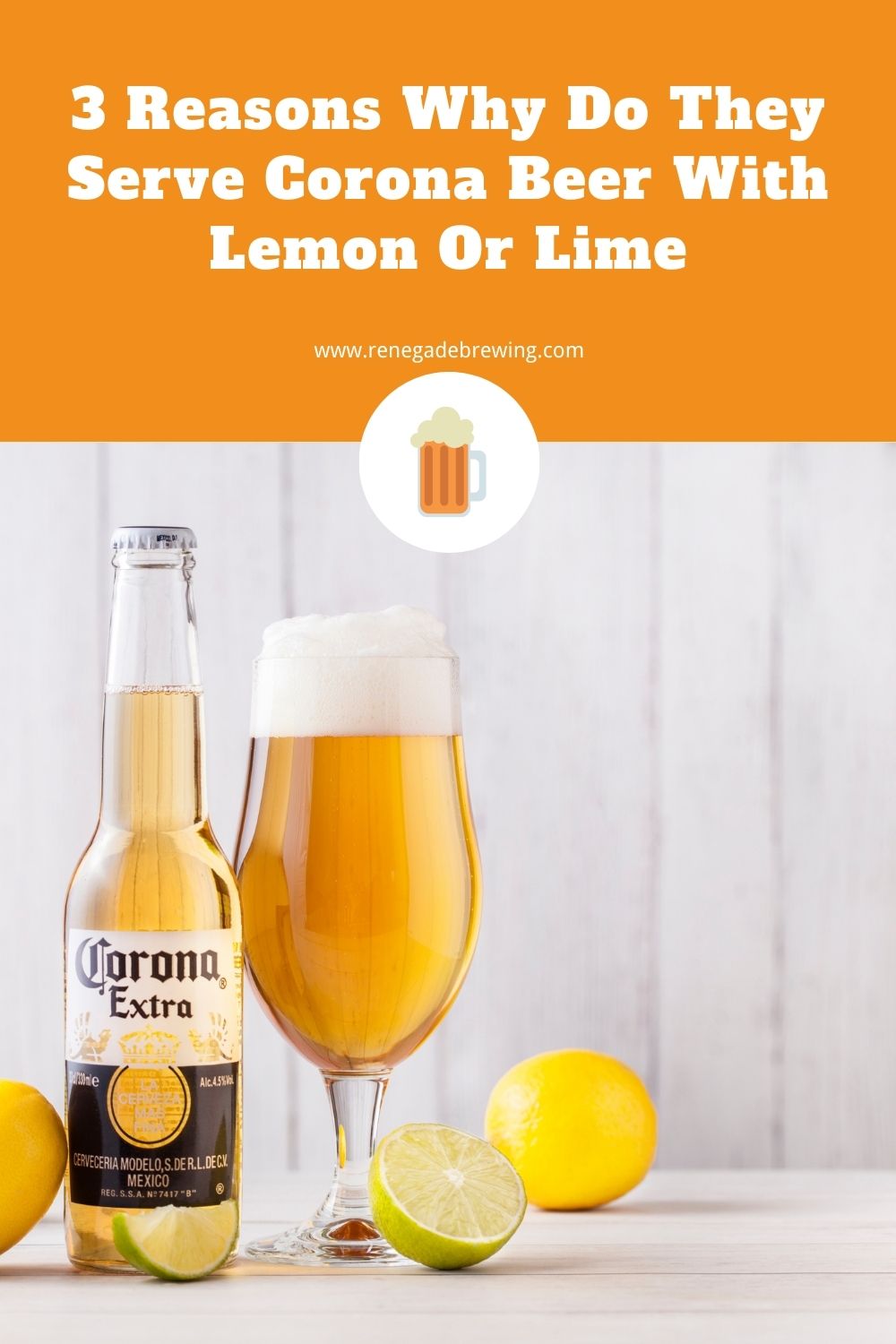 Plus, some bartenders will ask you what citrus do you prefer if you order a Corona or some similar light beer. Although it is seemingly common practice, you may wonder why do people serve beer like Corona with lemon or lime. Let’s see.

The Main Reason why do people put lime in corona beer

In most cases, you drink the beer straight from the bottle without using a glass. Therefore, one of the most common explanations for putting a slice of lemon in a Corona bottle is disinfection of its opening.

Initially, the manufacturer poured Corona beer in recycled bottles, which were not disinfected at the time. Plus, storing in the warehouse led to dust accumulation on the flasks. In such conditions, bartenders needed to use a citrus wedge to sterilize the bottle top. Thanks to a high dose of citric acid, this fruit prevented bacterial growth.

Additionally, Mexico had low-quality drinking water for a long time. Since it was one of the primary beer ingredients, the citrus purpose was to kill pathogenic microorganisms in water.

Nowadays, drinking water goes through filters that purify it before coming to users, but the tradition connected with citrus fruit has remained. Nowadays, many consumers use the lime wedge to wipe the lips, while pushing the slice inside the bottle is a popular custom among young people.

As I have already mentioned, the habit of drinking beer with lemon or lime has remained a tradition in Mexico. Plus, in these parts, it is popular to add a dash of salt into beer. That way, workers can easily prepare an alternative to a michelada or beer margarita when taking a break.

You can get two slices with a bottle of beer in many bars in the US. One comes on top of the flask, and another intended for your mouth is in on a tray. That way, you can use the citrus similar to the way you drink tequila.

Some people believe that the slice of fruit will hide the skunk beer flavor that occurs when the beer is exposed to sunlight. Red glass is the best in preventing this phenomenon, but it is quite expensive, so many manufacturers choose green and brown bottles.

On the other hand, Corona and similar beers come in clear glass bottles. Therefore, citric flavor softens the bitter beer taste and makes it more enjoyable to drink.

3. Citrus as a Marketing Trick

One theory is that bartenders put lemon in Corona beer because that way of serving is a part of the company’s marketing strategy. Most people associate citrus with beaches, the sun, the sea, and the chilling time, making Corona beer look exotic and more tempting.

Psychologists have proven that most shopping decisions are made unconsciously and under the influence of emotions. Since citrus in a Corona bottle reminds you of summer and pleasure, you will probably buy a bottle to fulfill this feeling.

It is also possible that the bartender will serve you beer with a citrus wedge only because you have both seen it done that way in a beer commercial.

There are many types of citrus fruits. What you call lime in most parts of the world is merely green lemon in Mexico. On the other hand, Mexicans refer to a similar type of citrus but with smaller fruit when they speak of lime.

Typically, they drink light beers with a yellow or green lemon slice rather than using lime. You will get a Corona with a yellow lemon or lime slice in Australia and the US, depending on what the bartender currently uses. In some cases, you can choose between those two.

However, in Korea, lime is rarely available and expensive, so bartenders use lemon almost exclusively. If you visit a bar in the Philippines, you can get a beer with half a calamansi.

Interestingly, this hybrid citrus is also grown in Florida, but most use it for cakes, jams, and lemonade. If you order Corona beer in Florida, you will still get a regular lemon wedge in the bottle.

Does Citrus Goes in Every Beer?

There are many types of beer different in taste and serving. Typically, lemon or lime is put only in light beers, known for their mild taste and a low percentage of alcohol. Since corona beer has 3 to 5% alcohol, bartenders often serve it with a citrus, melon, or flower aroma.

IPA (India Pale Ale) has a slightly higher percentage of alcohol than regular light beers. It is also known for its bitter taste created by maturing hops and malts. While some manufacturers add citrus, cucumber, or herbs to soften its flavor, you can also ask the bartender for a lime wedge.

Remember that citrus doesn’t go into dark beer, including porters and stouts. That roasted brown malt gives porter beers a specific, dark taste with admixtures of coffee, caramel, or chocolate, depending on the brand. These intense aromas don’t fit right with a taste of lemon.

You need to store and serve these beer types at room temperature. On the other hand, Corona and other light beers are served chilled.

Citruses belong to raw foods, and handling them requires compliance with health regulations. In most states, the Health code demands that bartenders wear gloves or use tongs when they put a slice in your bottle.

Unfortunately, that is rarely the case since most bar staff are unaware of these regulations. As a result, two-thirds of the lemon samples tested in one study showed the microorganisms, yeasts, and bacteria presence.

Sometimes, there is a chance that the bar owner procured contaminated citrus fruit, but inadequate handling is a more common cause of the problem. A bartender who uses bare hands to touch your food and drink will increase the risk that you can get sick after consuming your favorite beverage in the bar.

Strictly speaking, that means most bartenders violate health regulations daily, thus endangering customers’ health. In most cases, they justify this by saying that using the tongs is imprecise and inconvenient. Plus, the nature of the bartending business includes regular washing of their hands.

How to Put a Citrus Wedge in a Bottle?

Some people don’t have the habit of putting a citrus wedge in their beer or prefer original taste. If you are not one of them, choose a fresh, firm lemon or lime, depending on your taste. Wash citrus thoroughly and use a sharp knife to cut its top and bottom. Then, divide it into two parts lengthwise.

Cut the wedge from one of the halves and insert it partially into the bottle’s neck. Ensure the slice is not too thick because it won’t fit in the flask in such a case.

If you enjoy a stronger citrus flavor, squeeze some juice into a bottle and put lemon slices entirely inside. You can also place your thumb over the opening and turn the bottle upside down to mix the juice with the beer.

Be aware that this will cause foaming, so watch your clothes and hands. Plus, the citrus acid can cause skin damage if you don’t rinse the hands afterward.

You probably have not heard that citrus in a Corona bottle can cause Phytophotodermatitis, a skin issue. Mexican beer dermatitis occurs as a consequence of skin contact with chemicals susceptible to UV rays.

In layman’s terms, you can get this condition when accidentally spill on yourself Corona with lime left in a bottle that has stayed for too long in the sun. These skin burns are similar to those caused by jellyfish or poison ivy.

That happens very often to bartenders who work in open bars on the beach, especially if they are shirtless since the smallest amount of citric acid can cause a reaction.

After the initial burning sensation, you may feel itching, blisters, and redness. After a few days, you will notice the appearance of irregularly shaped brown spots on the skin.

Unfortunately, they can stay on the skin for months. Although there are no other symptoms during this period, the aesthetic side of this health problem is difficult for many people.

If you order a Corona or any similar beer at the bar, the bartender will serve it with a slice of lemon or lime. The citrus slice helps to disinfect the bottle’s neck, improve beer taste, and look nice. However, you can add lemon only in light, lager beers, while dark beers with a stronger flavor are served without additives. 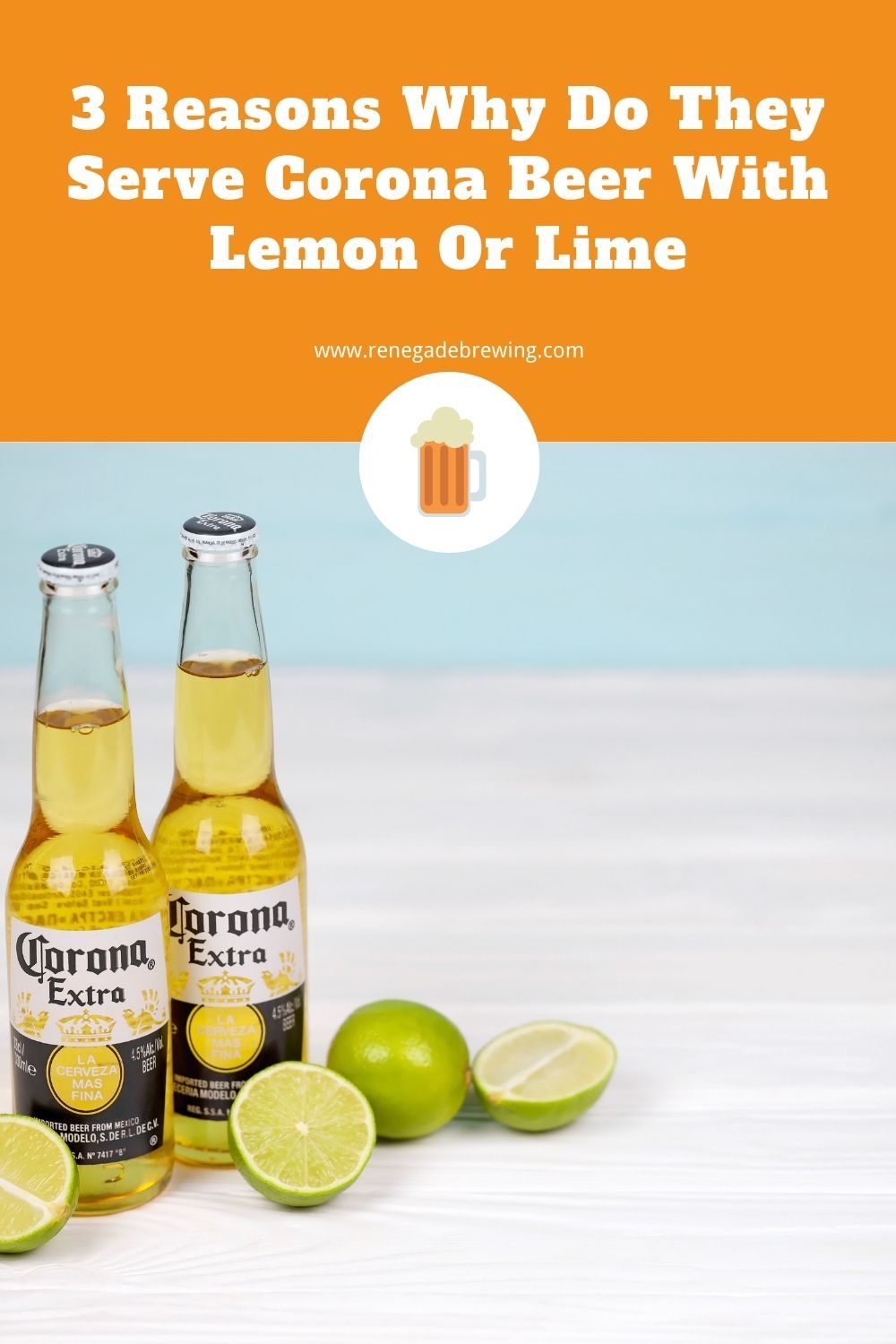