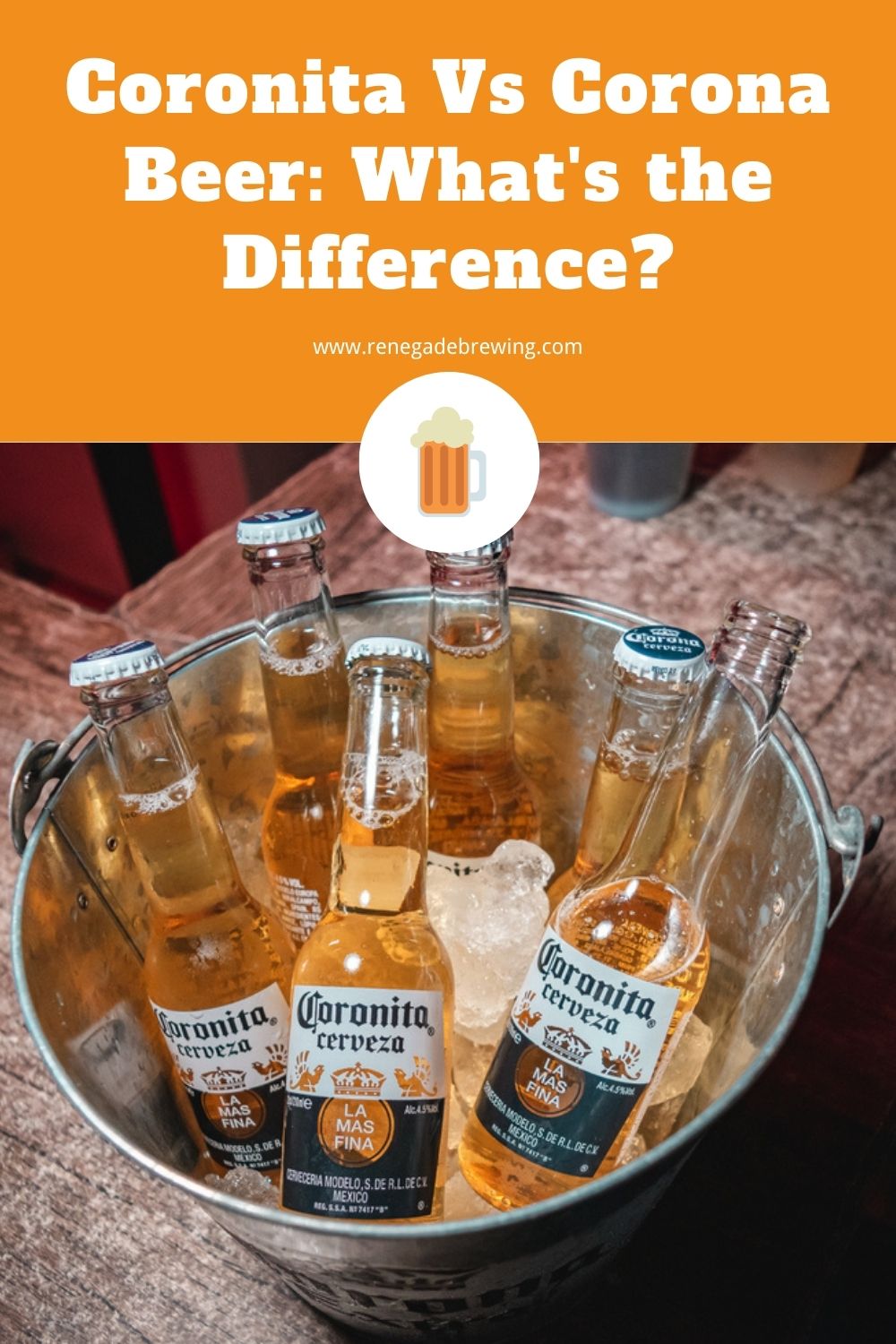 Corona beer is a staple in the United States and many parts of the world. But, what is that other offering known as Coronita? What is the difference between Coronita vs Corona beer? If you are looking to learn more about these two popular drinks, you have come to the right place. Read on!

What is Corona Beer?

The official name of what we casually refer to as Corona beer is Corona Extra. This is a type of pale lager that is light amber and is packed in a clear bottle.

Like many other beers, this one contains a cocktail of malted barley, hops, water, and yeast, giving it a fruity aroma with distinctive undertones of malt.

As the best-selling imported beer in the United States, Corona Extra is popular for its laid-back crisp, clean, and balanced profile that is easy on the palate even for the beginner. Best served cold, this beer contains 4.6% alcohol by volume and 3.6 % alcohol by weight.

Before we get into the difference between Coronita vs corona beer, let’s first take a look at the history of the Corona beer.

The History Of Corona Extra

The Corona cerveza is a Mexican beer first brewed by Grupo Modelo in 1925. This now popular beer was not exported to the United States until much later in 1981. Since then, Corona Extra has become the best-selling imported beer and it is among the top five most popular beers in the states.

In and outside the US, this beer continues to pose as a stiff competitor against local and imported beers. Although Grupo Modelo is the producer of Corona beer, AB InBev, a multinational drink company based in Belgium owns the beer brand itself.

In 1937, Grupo Model kicked into high gear efforts to position Corona Extra as a high-quality beer and to distinguish it from the cheap brew, known as pulque, a fermented drink made from the agave plant. This paved way for the international exportation of Corona beer a few years down the line.

Over the years, the company continued to improve its brewing processes. New and advanced pasteurization, fermentation, and refrigeration techniques were developed, resulting in an improved flavor.

Interestingly, in its early days in the US market, Corona beer was considered a cheap alcoholic drink that mostly thrived in the back streets of Denver and New York. Soon, though, its sales made a quick and surprising turnaround, making Corona Extra among the leading beers in the states.

Challenges along the way

Even though Corona continues to enjoy good sales today, the brand has had its ups and downs. Notably, in 1987 a rumor broke out that the workers at Grupo Modelo were urinating in the beer imported to the US.

Ridiculous as this seems, this petty rumor caused stores in the US to pull out their stock from shelves, drastically bringing down sales of the once-popular drink. Later, the rumor was traced back to a distributor affiliated with the Heineken brand but the damage had already been done.

The fact that the beer has a unique, almost off taste and smell probably made it easy to spread such a lie, and for consumers to believe it. This taste might be attributed to the fact that the beer is sold in a clear glass bottle, which exposes the content to light and causes oxidation.

Despite this, Grupo Mexico has never changed its mind about the impact of oxidation on its beers and it continues to sell the drinks in a clear bottle asserting that when you use the best ingredients then you have nothing to hide.

In 2009, the company began offering Corona Light, the lite version of Corona Extra in cans. Today, you have the option of buying your Corona beer either in a can or in the classic bottle.

Fortunately, Corona did recover from this blow and is now sold in more than 150 countries. Today, a major reason for the beer’s popularity is its impressive and memorable branding. The brand makes extensive use of the laid-back beachy vibes that many young consumers can relate to or aspire to.

The beer presents itself as an easy drink that is the embodiment of relaxation, friendship, and the good life. True to this image, Corona Extra offers a clean, hoppy, and smooth flavor that is neither intense nor subdued. In many ways, it is a perfect choice if you are looking for a good quality beer that truly allows you to go into your zone and truly relax.

What About Corona Light?

Following the success of the regular Corona Extra, Grupo Modelo introduced a lite version, aptly named Corona Light. This one has a sweet fruity aroma with hoppy undertones and is the ideal choice if you are looking for the signature taste and flavor of Corona with lower calories.

The regular Corona Extra beer comes in a 330ml bottle and the Coronita is packed in a slightly smaller 210ml bottle. The brewing company further says that Coronita has the same refreshing taste as Corona Extra, in just a smaller bottle.

The name Coronita originated from Spain where the words ‘ita’ or ‘ito’ are added to the end of a word to describe the diminutive version of something. Coronita is a Spanish word that literally means ‘little crown.’

In Spain, Corona Extra beer is branded as Coronita to differentiate it from the trademarked name, Coronas, which is already owned by the famous winemaking company, Bodegas Torres. The packaging, quantity, and content are otherwise not different from the Corona Extra beer sold in the USA, United Kingdom, Canada, Australia, and other parts of the world.

So, in the states, Coronita is simply the smaller version of the Corona beer. The contents and flavor of this smaller beer are the same as its larger version. In Spain, Coronita is the brand name for what is sold as Corona Extra in other parts of the world.

Corona beer and Coronita have a similar flavor. Both drinks are made from a blend of barley, water, hops, and yeast. As far as taste goes, these cervezas offer a dry, crisp, grainy, and light flavor that is easy on the palate, more so for beginners or anyone looking for a smooth drink. Best served chilled, both Coronita and Corona pair well with meaty servings of fish or steak, and nuts too.

So, what is the meaning of this signature lime wedge? There is no agreement on why the piece of lemon is pushed inside the bottle. Some say it is a Mexican hack meant to keep flies away from drinks while others say it was just a quirky gesture started by a creative bartender. A more feasible theory is that the lemon accentuates the flavor of the beer, helping to get rid of the weird taste of oxidized beer. Interestingly, in Mexico, Corona is not served with lime and locals enjoy the no-frills, lime-less version of the beer

Coronita is often confused with a Coronarita. A Coronarita is a popular cocktail drink, which is a blend of Corona beer and a slushy margarita.

To make a Coronarita, a Coronita is flipped bottoms up and placed inside a glass of a classic margarita. It would seem that by flipping the bottle this way, the beer would flood inside the glass. However, inverting the bottle pushes air in, which creates pressure and keeps the beer from flowing in too fast. As you sip on the margarita, the beer flows into the glass to fill in the space left by the margarita.

As it stands, Coronita and Corona Beer are the same drink and only differ in bottle sizes. A diminutive option, Coronita is a good choice if you are looking to enjoy a quick dash of your favorite beer. Opt for the larger version, Corona Extra or Light for a longer relaxation session. 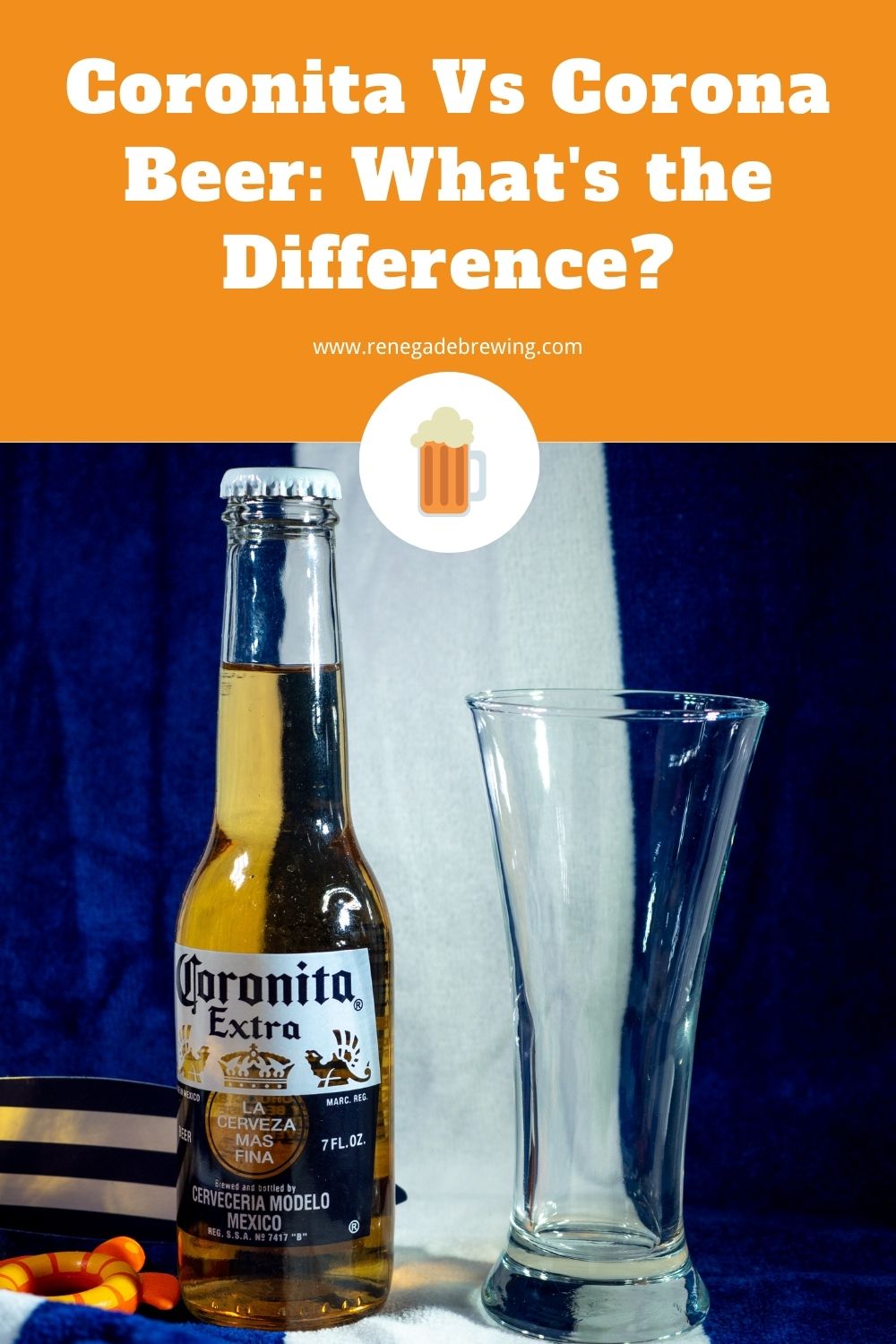 1 thought on “Coronita Vs Corona Beer: What’s the Difference?”