Many people believe that unopened beer stays quality until they open it. Unfortunately, it is not entirely correct. The only exception is vintage beers meant for aging. 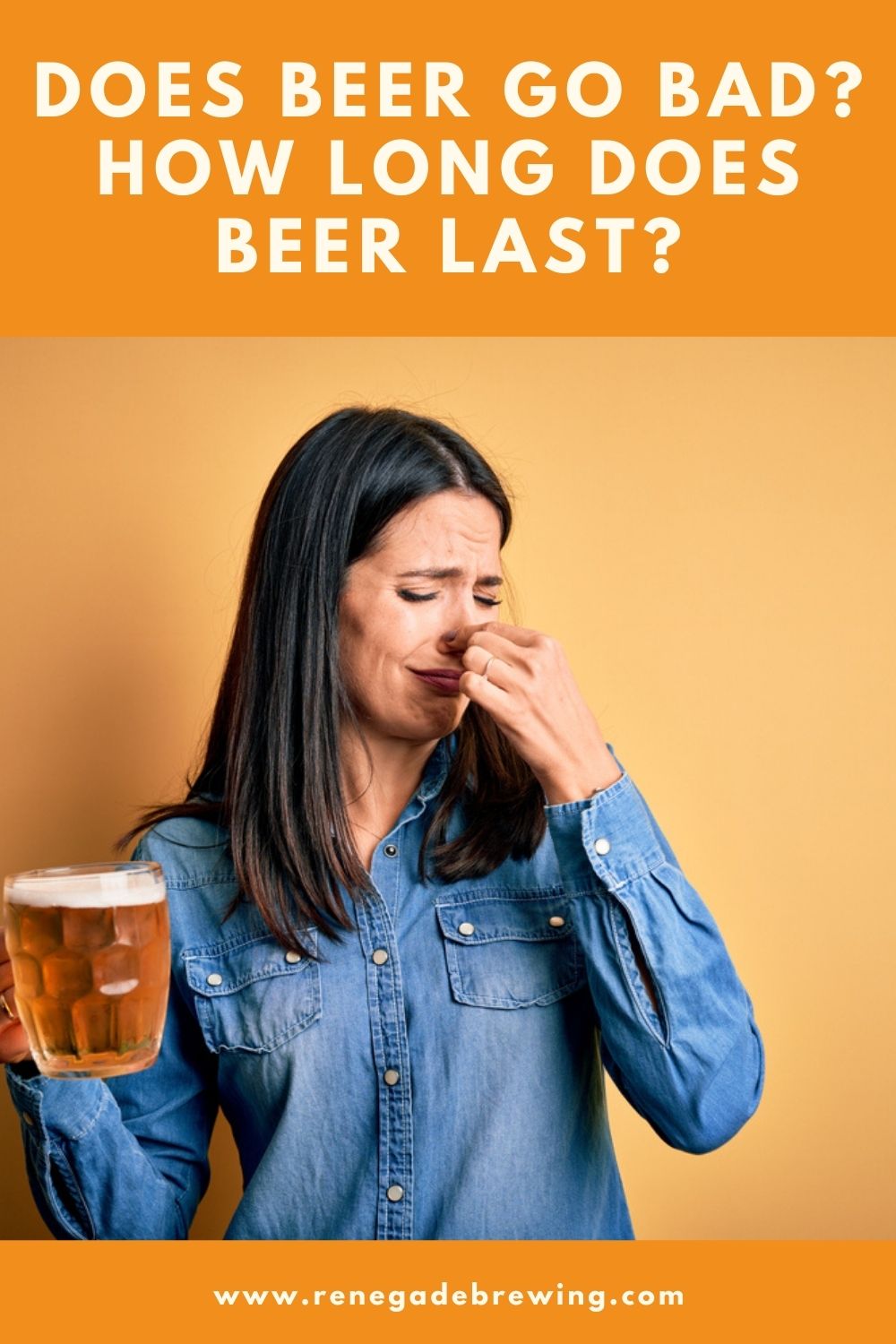 The truth is that different beer styles won’t last forever because they don’t end with fermenting at the moment of sealing the bottles. In other words, beer will continue to change over time.

Let’s see does beer go bad and how long does beer last.

No, beer usually won’t spoil. It will happen in only three cases, including exposure to:

How Long Does Beer Last?

Unfortunately, beer can’t last forever. Most types will stay top quality for six months at room temperature, but you can keep it up to one year in the fridge.

Believe it or not, some of the refrigerated types will last two years beyond the expiration date. Canned beer often lasts longer than bottles because of the less amount of light reaching inside. In any case, its flavor will slowly degrade.

Once opened, your beer will have a shorter lifespan. Even the one left in a fridge will go flat after a while. The reason is the loss of carbonation that results in stale taste. The only exception is some craft and vintage beers meant for aging. You shouldn’t consume it fresh since it will get the full flavor after a few years stored in a cellar.

Remember that some manufactures use the best-by date, but others stick to the bottling date. As for a vintage beer, you should look for the data for how long it needs to age for the best result.

6 Tips to Tell if Beer has Gone Bad

The fact is that beer won’t spoil and become unsafe for consumption. Unfortunately, it doesn’t mean you can drink it indefinitely. Once opening an old can or bottle, you will see clear signs that the beer you have is no longer drinkable. Let’s see.

Pro Tips: Any taste reminding you of popcorn means that beer contains too much diacetyl. This buttery-flavored compound is dangerous for your lungs. You can also notice some weird beer tastes, reminding of sulfur, cooked cabbage, or sewage.

As I have already mentioned, the best way to store unopened beer is in a dark and cold place like a pantry, cellar, and fridge. Once opening it, you should keep it only in the refrigerator.

Light is one of the primary beer enemies, so you need to store it away from bright places. In fact, hops that give the beer a specific flavor are sensitive to direct sunlight. Any exposure will result in a chemical reaction followed by a skunky taste after a while.

The best solution is to keep beer in kegs, casks, and cans that prevent the UV light from entering. The second option is brown bottles, while green and clear ones offer the least protection. It is enough to leave the beer for only 10 or 20 minutes in a bottle made of clear glass in direct sunlight to make it goes skunky.

Don’t mix this with intentional exposure to sunlight that some manufacturers do to get a particular recognizable beer taste.

The high temperature is a significant problem when it comes to beer. Leaving it in a warm space will affect its taste over time. With average temperatures of 50 to 55 F (10 – 13 C), the cellar is an excellent place to store beer for an extended period. It will slow down the aging process but won’t stop it entirely.

In most cases, storing beer in the refrigerator is the best option you have, especially if you live in a warm region. Keeping it at 35 to 46 F (1.7 – 7.8 C) will slow the aging process. Place cans and capped bottles in a fridge because they help to achieve the ideal temperature and best UV protection for getting a delicious beer.

Keep in mind that you always need to store beer in upright cans and bottles. That way, you will prevent unnecessary oxidation by keeping the smallest possible beer surface area in contact with the air. That will both slow its aging process and avoid cap contamination.

Basically, you can’t store beer this way for too long, but it is convenient to chill it quickly when needing it for a party. The problem is that extra pressure in the bottle forces the cap off after a few hours. In the worst case, you will get stuck with broken glass.

Besides, freezing and thawing will alter the beer aroma. However, there is no need to throw it away. You can use it for preparing marinades instead.

The Risk of Consuming an Expired Beer

There are no reputable sources that conclusively claim whether drinking lousy beer can be harmful to your health. In most cases, you will get a bad taste in your mouth without becoming sick.

Since it is a fermented beverage with low pH that contains alcohol, it is excellent protection against harmful pathogens.

The rare exception is a case when a manufacturer uses dirty and contaminated equipment in a brewery. In that case, impurities and possible microorganisms will be transferred to the beer and cause nausea after consuming it.

You should also be careful when having an expired unpasteurized beer. It is always better to throw it away instead of drinking it and risk possible inconvenience.

Can You Freeze Beer?

You can’t store your beer in the freezer safely for long since a beer can and bottle explode at low temperatures. The minor problem is that liquid tends to expand, but the severe danger is the carbonation.

At freezing temperatures, water will push the carbon dioxide bubbles. That force is strong enough to knock out a cork or break a glass bottle and cause a beer to spill.

Even though you take out the bottle before that happens, the result of freezing will be ruined beer. Besides, freezing is forbidden for a bottle-conditioned beer with live yeast. The problem is that low temperatures kill the yeast and stop additional flavor development.

In some cases, frozen beer can be a matter of choice. For instance, the process of making German Eisbock includes freezing on purpose. After removing the ice, the rest of the beer contains a higher level of alcohol.

Beer is a fermented beverage that rarely goes bad. Except for an expired pasteurized beer that can be harmful to your health, all other types won’t make you sick. However, it will be wise to avoid the one that tastes and smells terrible and drink only fresh beer. 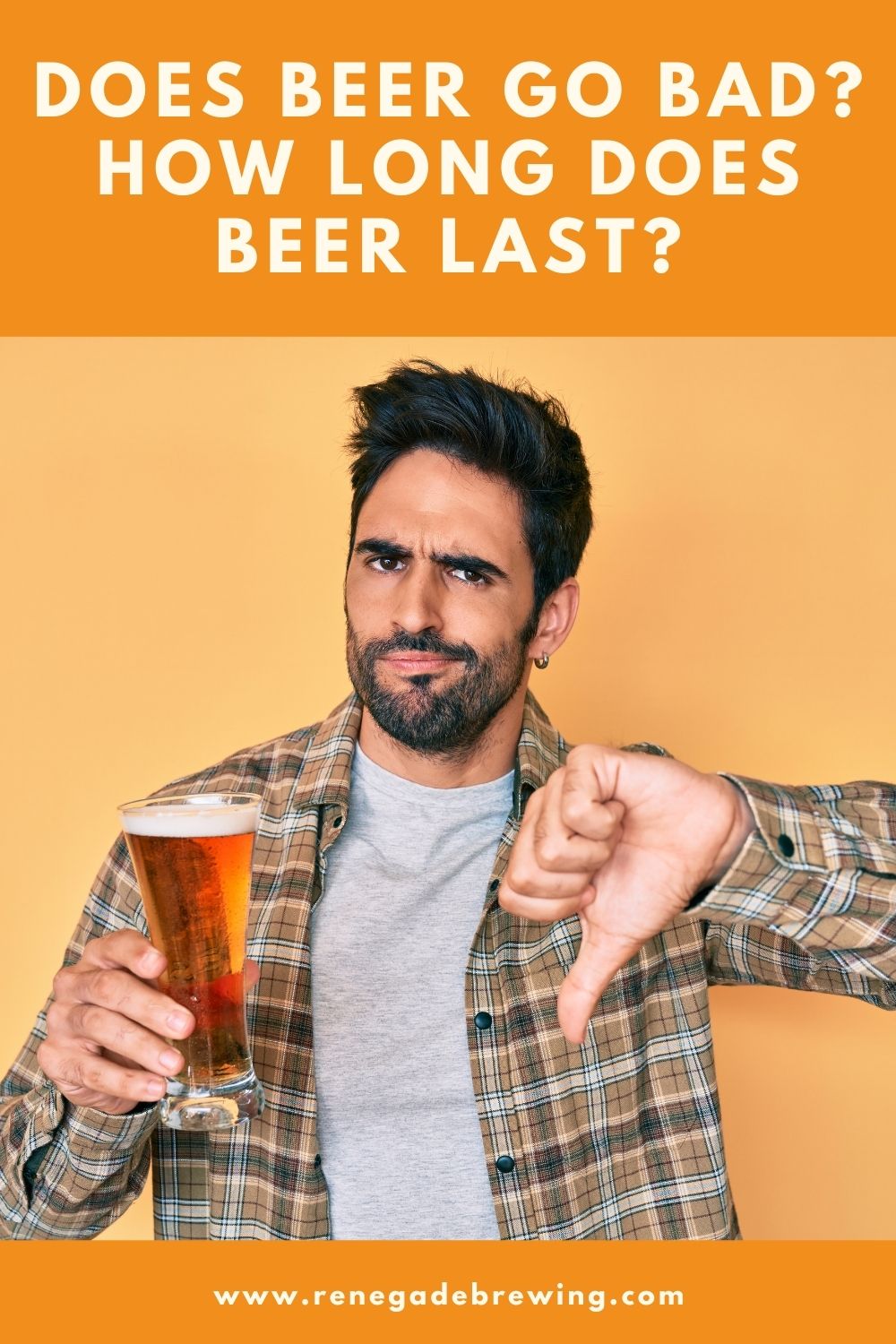