Raw eggs in beer? Does this seem like a strange idea to you? Clearly, you haven’t been around (the internet) for very long. Because it’s definitely a thing. But is it safe to consume raw eggs?

Well, you might get salmonella poisoning but only from the shell, so if you crack the egg, keep it clear of eggshells, and eat (or drink) it immediately, you’re probably okay. But still … why? 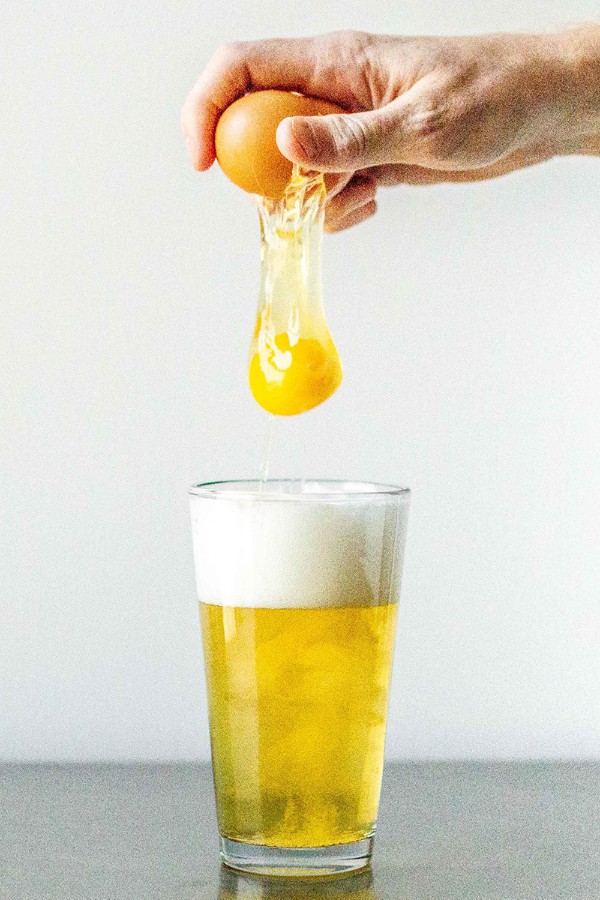 In the olden days, people drank beer for lots of different reasons. To keep warm. To feel full. To celebrate. To mourn. For digestion. For spiritual rituals. For pleasure and spot. And, of course, traditional beer was heavier and thicker than the stuff we drink today. Also, beer was invented by women. So it made sense for eggs to find their way into the ‘dish’ and ‘get cooked’ by the booze.

The phrase ‘hair of the dog‘ suggests a cure for late nights. It’s short for ‘hair of the dog that bit you’ and was initially means to cure rabies. (By catching the dog that bit you and shaving it, apparently?) Some say you can ‘ease’ hangovers by consuming more alcohol – preferably beer, and preferably with a raw egg in it. The NACs in egg yolks are good at soaking up boozy toxins.

Lots of people eat raw eggs for health reasons. But beer drinkers are generally a light-hearted lot. Why else do we take what are essentially healthy things and add beer to make them fun? I mean, think about it. Beer races – they’re like peak athletics … but with beer. Or beer yoga. So if you want to make like Rocky and chug your breakfast protein, well, how do you like them eggs?

Kids have always done things ‘just because’. Whether they were doing it for the vine or trying to impress a girl (a boy). But in today’s social media age, adults are just as likely to do things on a dare. And it’s not just millennials. Lots of people (who are old enough to know better) will beer their eggs on a dare. In this case, Bradley left his liquor for later. It’s the thought that counts?

As long as we’re talking about celebrity influence, the movie Cocktail has a scene where Tom Cruise watches his boss-to-be fix and drink a Red Eye. It has beer, raw eggs, tomato juice, and aspirin. Think of it as a bloody mary, but with beer instead of vodka. Some people call it red beer. But don’t get it mixed up with its tamer caffeinated cousin – coffee with a shot of espresso.

They call it egg beer and at the famous Giang Café in Vietnam, they crack a thousand eggs into beer (and coffee and cola) every day. The café owner, Nguyen Chi Hoa, grew up drinking coffee and tea enriched with eggs. So as an adult, he figured adding beer to this indigenous recipe made sense. The egg yolks are whisked with sugar and butter before adding beer. Fans love it!

You’ve probably heard the joke about beer making your eyes blurry. Others claim alcohol helps them think more clearly. Either way, traditional beer brewing was a complex process with lots of protein-heavy ingredients. Sometimes, raw eggs were added to make the drink less cloudy. Some of today’s artisanal drinkers might try the same trick for their bathtub brewing adventures …

It’s not just body-builders and boxers who have raw eggs for breakfast. Turns out lawyers do it too. In The Verdict, a drunken lawyer (played by Paul Newman) chugs an eggy beer for breakfast. By the end of the movie (and the book), he’s actively fighting his alcoholism … though we can’t be sure it was the eggs that did it. Still, that scene may have you chasing chickens …

You’ve probably heard of American breakfast (hash browns, pancakes, coffee, toast), or English breakfast (bacon, eggs, beans, tea). But The Wire introduced us to the dockworkers’ Irish breakfast – beer and eggs – though not in the way you’d expect them. The ‘why’ of it is never explained, but these are tough, blue-collar workers closing off the night shift so … calories?

Specifically, it was called the miner’s breakfast and was probably the seed behind that scene in The Wire. According to research by Mark Noon in his book Yuengling: A History of America’s Oldest Brewery, miners would use this ‘breakfast’ to beef up for a shift at the mines. It was a sho of whisky chased with a beer that had egg yolk mixed in ‘to soothe the boozy liquor burn’.

In today’s bars, the countertops are littered with baskets of nuts and pretzels. Some baser bars even joke about the hidden power of peanuts. But in older, dingier bars, eggs are a more common snack. They might be boiled and served with salsa. Or they may be placed in a bowl, ready to crack into your beer or cocktail. It’s not odd to find them in hidden-alley-macho bars.

In Chile, beer is a popular ingredient in desserts. And yes, they sometimes put eggs in it too. Malta Con Huevo mixes eggs, sugar, and dark malt beer in a blender. Another popular egg-less variant uses dark beer and condensed milk. This second dish is cold Malta Con Leche Condesada. Both drinks are common at Chilean dinner tables – and it’s not just for Christmas!

So far, we’ve seen several (beer) cocktails that involve eggs. And technically, eggnog is boozy too, though the alcohol is bourbon, whisky, brandy, or rum. The flip is a similar old-timey drink made with sugar, rum, beer, and eggs on hot iron. This technically cooks the eggs, but they were raw when you mixed them into the beer … so that counts … right? And Jerry Thomas approves.

We’ve talked a lot about traditional brewing. And we’re sure a lot of moonshine recipes involve eggs in some form. Bit West Country White Ale is a more formal beer from the olden day. And yes, it was fermented with raw egg whites. Up to two dozen at a time, so we can only imagine they did a lot of home baking to use up all those yolks. So you could try it out at home …

That’s one of the ‘street names’ for raw eggs in beer. You don’t have to guess why. But if you’re ever in a burping contest and you want to score extra points while soothing your hangover, it’s an idea you can use. Do it on an empty stomach though, or you may do more than burp. And have a sweet cola drink to chase that eggy taste … though the extra fizz might count as cheating.

Some people look back to the 20s with nostalgia. Even though those stories are quite dark. Things like eating depression chocolate cake because they couldn’t get eggs or butter. Or lining up for food and out-of-work parents spending more time at home. Or getting your protein fix by putting raw eggs in beer because you were too broke for meat. You know, the good ol’ days.

Yes, lots of people use alcohol as a social lubricant. The term was originally soldier’s courage and referred to battlefield drinking. So it makes sense that prison warders on a hit show would need more of it. Fortified with raw eggs. They call theirs the Fallujah Omelet – a top breakfast of raw eggs and jager bombs. Technically Jägermeister isn’t a beer, but bombs can have beer in them …

Yes, we have served up several hints implying egg beer is just eggnog for college kids. But while some dorm-room brewers will still opt for cheap rum, true beer lovers go right to the beernog. Invented by Randy Clemens and immortalized in the Sriracha Cookbook, it’s a treat for all times. The recipe feels like that Chilean delicacy we saw earlier … but this one is more … American.

Ancient medical practices were sometimes … disturbing. But once in a while, they held some truth. Booze for anesthesia and disinfection, for example. That was a sound concept. And some of those ideas were quite fun. Imagine getting drunk to cure coughs or colds. Posset and syllabub had eggs, cream, and wine or cider. Mixing beer, raw egg, and honey was a common tincture too.

Whether you’re doing it for fun, on a dare, or to cure headaches and sniffles, these are just some of the reasons why people put raw eggs in beer. Have you tried? Why? Tell us in the comments!