Would it surprise you that The UK is Europe’s second-largest beer producer? (After Germany, of course.) They also have one of the world’s oldest brewing traditions. And while it’s important – politically – to separate the UK and Great Britain, it’s easier to just call the British beers. At least for beer sales. So let’s find the best British beer. 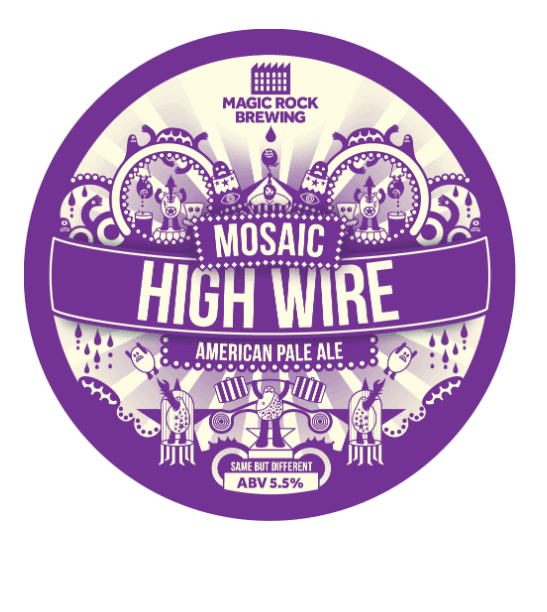 American rappers (and sports types) are always pitting the west coast against the east. But when you hear these terms listed on a British beer can, you’re allowed to feel confused. It’s not that puzzling though. Magic Rock Brewing has several west coast beers, and they’re all American Pale Ales (APAs). So yes, they refer to American beaches and regional identity.

High Wire is the brand’s series of regional pale ales w9th ABVs of 5.5%. The series includes cans inspired by the US, Australia (OZ), and New Zealand (South Island). The original High Wire (West Coast) has mango, grapefruit, and lychee. It uses 6 American hops, 4 malts, and WLP001 yeast. Mosaic (purple) has the same beer formulation but is single-hopped instead. 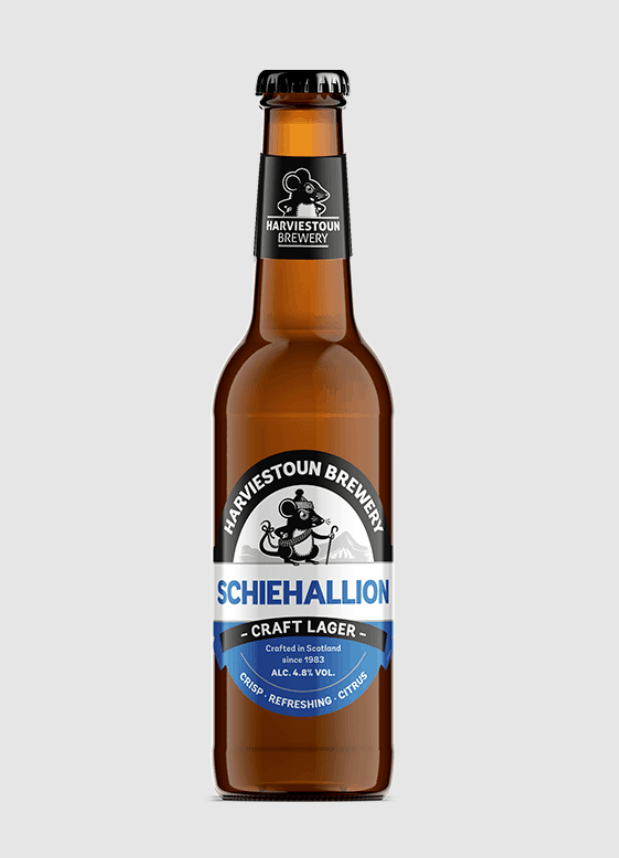 If this beer doesn’t sound too … British … it’s because it’s Scottish. Think haggis, bagpipes, and kilts. Also, Johnny Walker. But let’s get back to beer. Schiehallion is named after a mountain and is sometimes categorized as a ‘champagne beer’. It’s earned tons of beer awards for its Harviestoun Brewery. The beer has an ABV of 4.8% and a rich golden hue.

The beer is semi-sweet with a bready scent. Other flavors include honey and grapefruit. The beer has a mixed mash of lager (barley) malt and wheat malt, giving it a complex, layered palate. The beer starts with a thick, foam-filled head and finishes with the sweet lingering taste of grapefruit. It’s hopped with Celia, Bobek, Challenger, and Hallertau Hersbrucker hops. 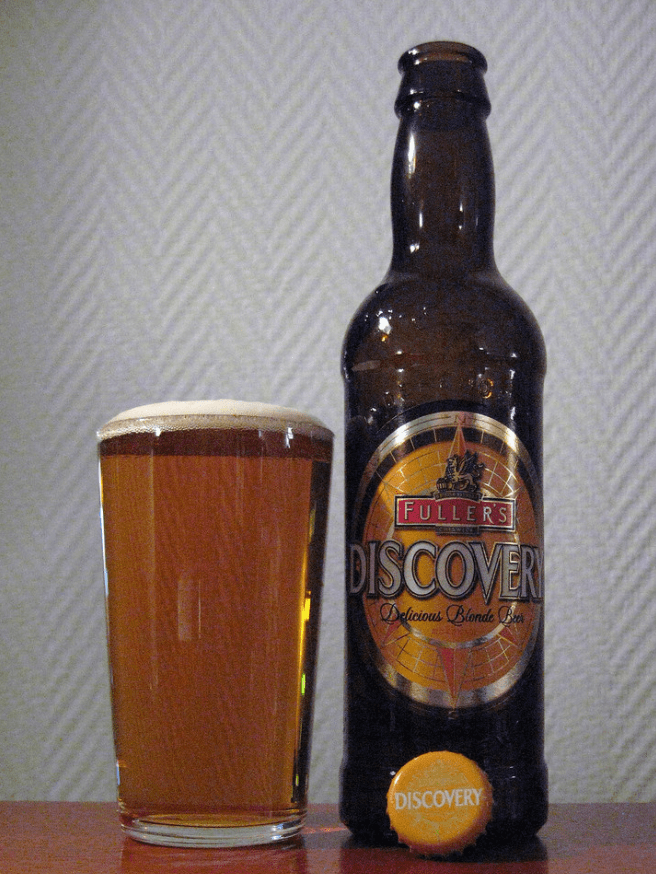 If you ask certain craft beer pros, they’ll tell you British Beers are better described as ales, not beers. And that they should be served at room temperature, never chilled. These zymologists call British beer ‘the world’s only real ale’. But if you’re used to the sight, sound, and smell of lager, start with golden ales – they’re similar to commercial lagers in color and flavor.

Discovery is a blonde British beer from the Fuller’s Pub franchise. It has an ABV of 3.9% so it’s a solid session beer. The beer has a thin head and a hoppy aroma. You’ll catch the grapefruit right away so no more scurvy dogs for you. It has a smooth mouth-feel. Because it’s grapefruit rather than lime, the citrus is on the sweeter side but with a bitter finish. 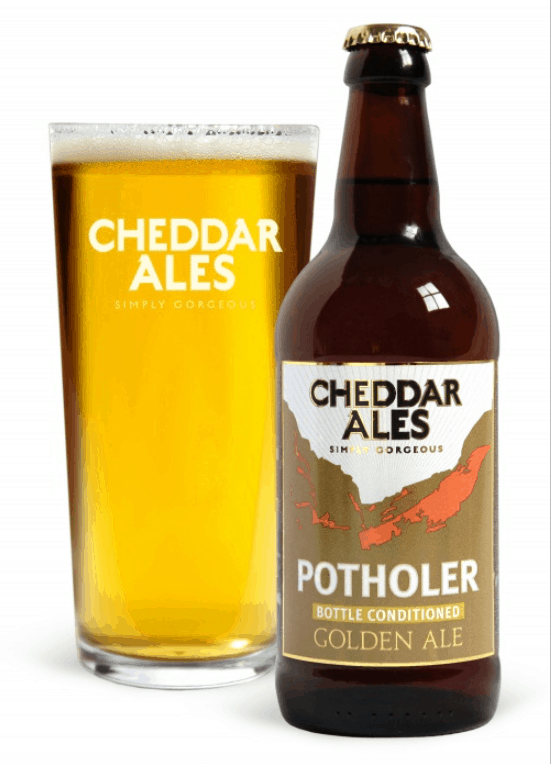 Here’s another artisanal golden ale. Cheddar Ales are proud of their flagship beer. And they should be – it impresses tipplers and has won beer awards. Potholer has a 4.3%ABV and a distinctly plum and pepper palate. It leans more toward bitter than sweet and has a dry, but it has a refreshingly zesty mouthfeel. Aromas include mixed citrus peels (lemon and orange).

The beer mashes three malts – crystal, wheat, and Marris otter. The hops are Slovenian Styrian Goldings and English Challenger. This beer isn’t served immediately after brewing though. Each drink has yeasty sediments that facilitate bottle conditioning. So the longer you keep it in the fridge or cellar, the better it tastes. Shake before serving to fully mix the yeast. 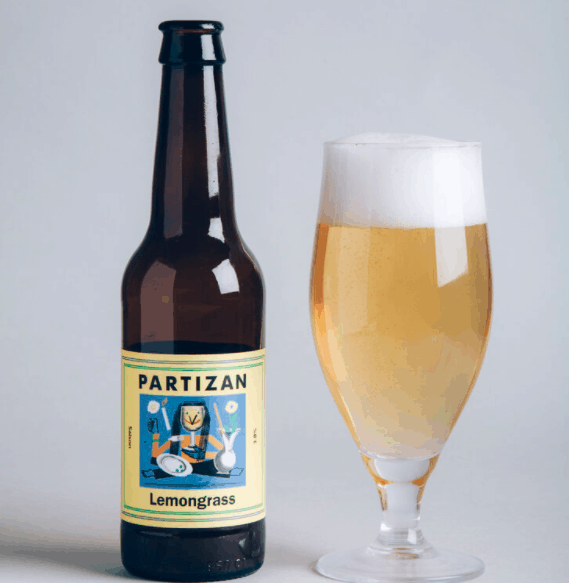 Saison is French for ‘season’ but these are not necessarily seasonal drinks. They’re fruity, fizzy, farmhouse brews with extra spice. And they’re bottle-conditioned. Partizan’s version has an ABV of 3.8%, and many traditional farmhouse ales had similarly low alcohol levels. Partizan has a light color and lemongrass nose, echoing traditional citrus barnyard beers.

Its mouthfeel and flavor are quite close to a pilsner. It doesn’t offer much head when you pour. But that could be a good thing because bottle-conditioned beers should be shaken before opening. So if they’re too fizzy, you’ll lose a lot of beer as it foams over the sides of the bottle. You have to extra careful to get the bulk of it into your beer glass. Or use the bottle. 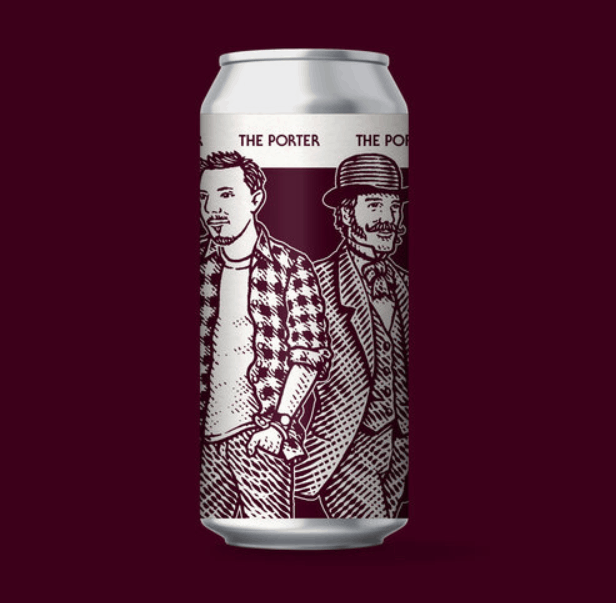 When you can announce yourself as The Porter, you’re doing something right. (Though supermarket stockists may disagree). This porter has an ABV of 6.7% and a rich mix of coffee and dark chocolate. Anspach & Hobday are confident their porter can cut across classes – from the flannel-and-jeans hipster to the boss in the bowler hat, both pictured on the label.

The beer pays homage to river porters. Think of them as inland dock workers. It celebrated street porters too, so the bowler-hat dudes must be their clients. Though we can’t be sure porters wore jeans in the 18th Century. Either way, this pitch-black beer uses kiln-roasted coffee and has a tangy kick at the finish. It was the most popular beer of the Victorian Era. 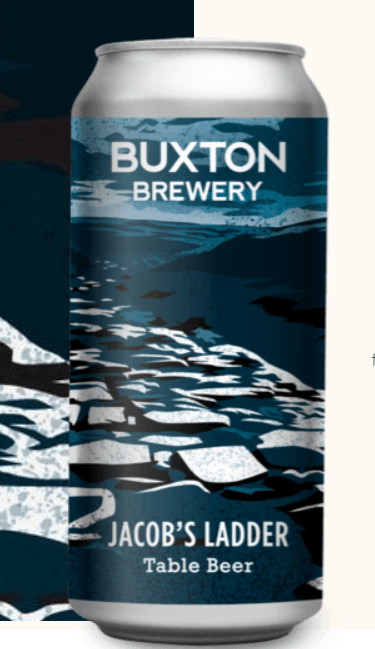 The beer, not the movies. It describes itself as a table beer, meaning it’s casual enough for burgers, hotdogs, and Sunday dinner. Table beer used to be safe for kids, with low alcohol levels. But was back in the days when beer was safer than water so everybody drunk it. Today, even at 2.8%ABV, you shouldn’t serve this beer to children (or drafted teen soldiers).

Jacob’s Ladder is a dark, frothy session ale that’s both fruity and malty. It has a pale yellow tinge and a wheat-barley malt mix with oats to boot, making for an intricate three-layered palate. Its body is barely there and its flavor is steeped in grapefruit and peach with loud citrus notes. The head is thick with a creamy mouthfeel, a bitter front, and a floral finish. 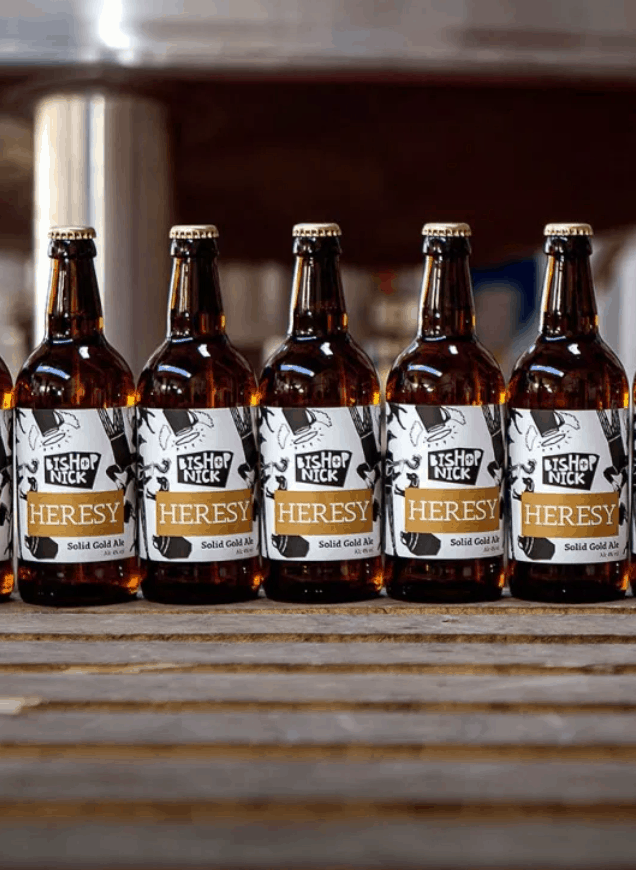 With a name like that (and gold + silver medals) we dare you to dislike this beer. It’s a golden ale with an ABV of 4% and is one of the ‘Sacred Ales of Essex’. So says the bottle. The beer is on the bitter side of life, but not because its namesake was martyred for … heresy. Nope. The bitterness comes from spicy Challenger hops. This is later rounded off with Goldings hops.

The latter set of hops adds florals and citrus to the drink’s palate. The malts applied here are typical pale ale malts. And if you buy it in a recyclable 5-litre mini-cask, you get the added gift of cask-conditioning. This gives your beer an even richer taste and heightens its potency. 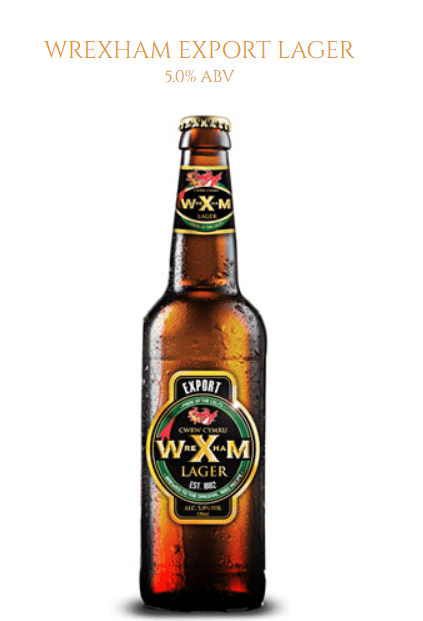 We’ve looked at English and Scottish beers, so now let’s make a stop in Wales. Wrexham sounds right British … and it could easily be a football club. (Fyi, that’s soccer for us.) And it is, actually. A football club The Red Dragons. But let’s focus on the beer. This Welsh wonder has an ABV of 5% and is specifically brewed for overseas markets. (The local version is 4%).

The brewery was built by Bavarian Kaspar Schulz, a Bamberg resident. And Wrexham was ‘the only lager drunk on the Titanic’. It’s a ‘prickly’ light-colored beer with high carbonation. The mouthfeel is surprisingly smooth for something so fizzy. And its finish is ‘lemony and waxy’. While that doesn’t sound pleasant, it’s ideal in Brtish lagers so check it out. 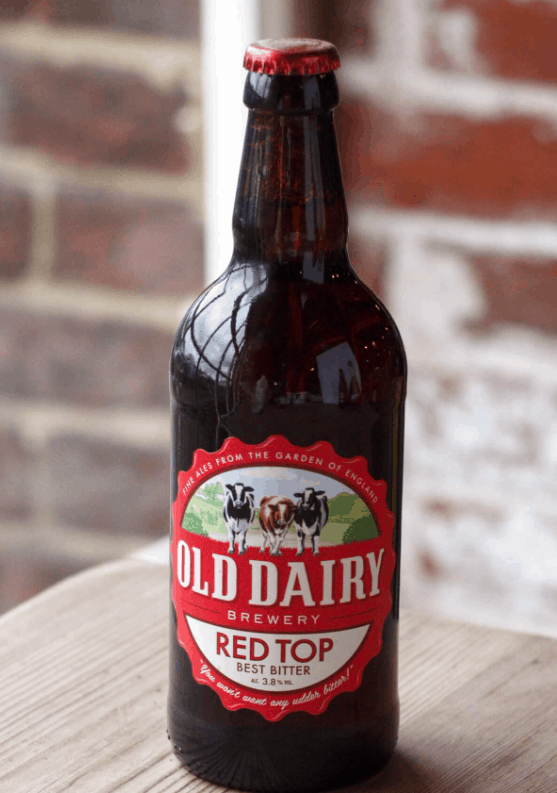 East Anglia is best known for farming and research. Specifically, sheep. And Old Dairy is one of its top breweries. This Kent brewing house converted a dairy farm in 2010. Their most awarded beers are Red Top (bitter), Gold Top (golden pale ale), and Blue Top (IPA). But they have lots more, ranging from Uber Brew (hoppy) to Dark Side of the Moo (imperial porter).

Red Top four-malt beer brewed with crystal, chocolate, brown, and Marrs Otter barley malts. It was named the best British Beer in the bitter category. It has three hops – Challenger, English Cascade, and East Kent Golding. They give the beer its distinctly spicy sharpness. The beer’s ABV is 3.8% and its IBU of 24. You’ll taste the assonant mix of coffee and toffee. 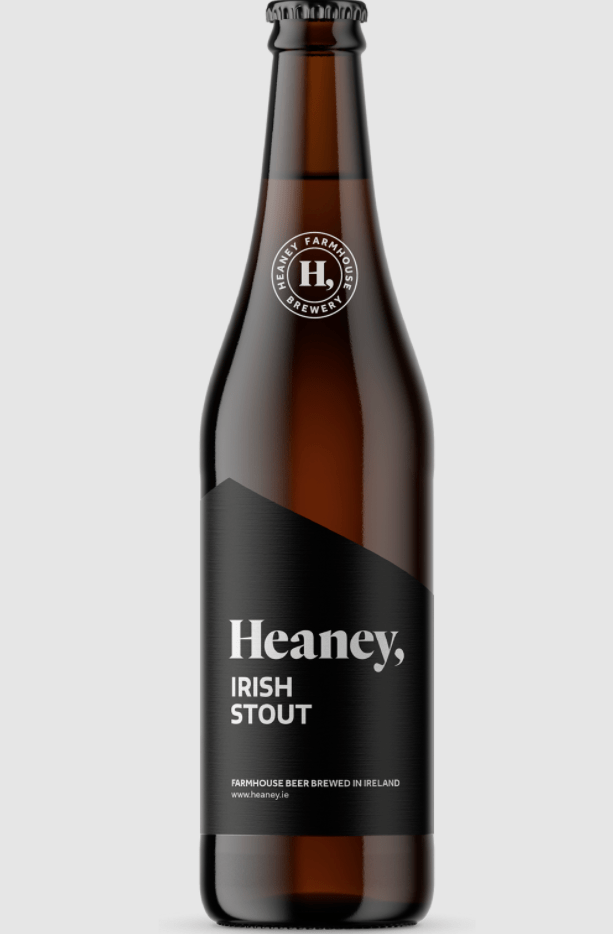 Technically, Northern Ireland is part of the UK. But it’s not part of Great Britain. And most residents call themselves Irish rather than British. But while each British Isle has a separate soccer team (and its own rugby team too), all their beers reside in the British section of the liquor store. (Unless it’s Guinness, which is technically English and Irish with a London HQ).

Heaney is a dark stout, so it’s in the same beer class as Guinness. It has an ABV of 4.3%. It’s a farmhouse beer but it’s in no way a Saison. Instead, this stout starts with the mildest hint of coffee and dark chocolate at the nose. It ends with the dry finish of roasted malt. The beer is filtered or refined and has no artificial fizz. It pairs well with meaty dishes and desserts. 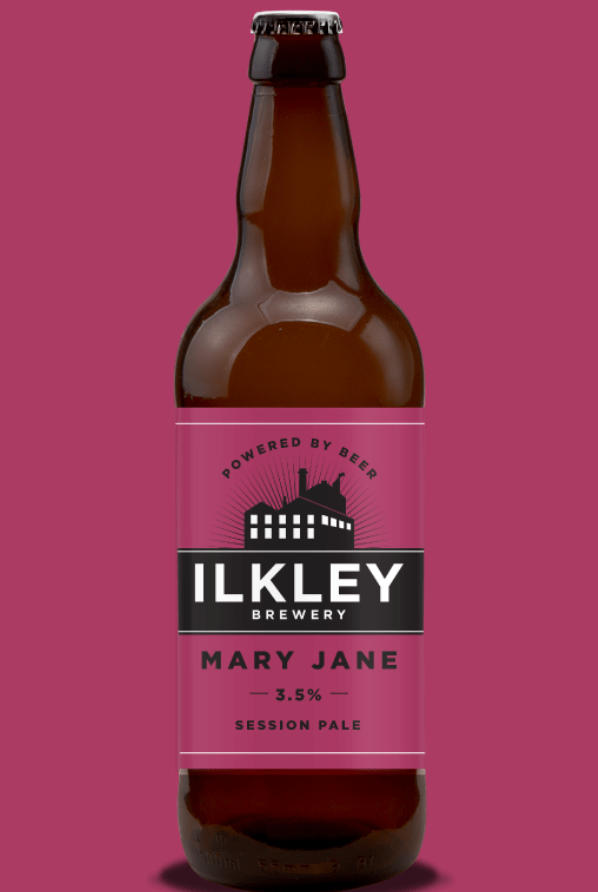 In our part of the world, Mary Jane can get you arrested. In more ways than (nine-one-)one. But over in Yorkshire, Mary Jane is the leading lady in On Ilkla Moor Baht ‘at, the unofficial folk anthem. Baht ‘at means ‘without a hat’ and the song chides him for courting her in the cold without one. So … about that beer. At 3.5%ABV, MJ is quite sessionable.

It uses two UK malts – Crystal and Golden Promise. For hops, it uses American Cascade and Amarillo. You can sip Mary Jane Session Ale year-round. But if you want something more adventurous, you could cycle through the 10 Hail Marys. It’s a specialty series of Mary Jane variants to celebrate their 10th anniversary. These range from milkshake ales to black IPAs. 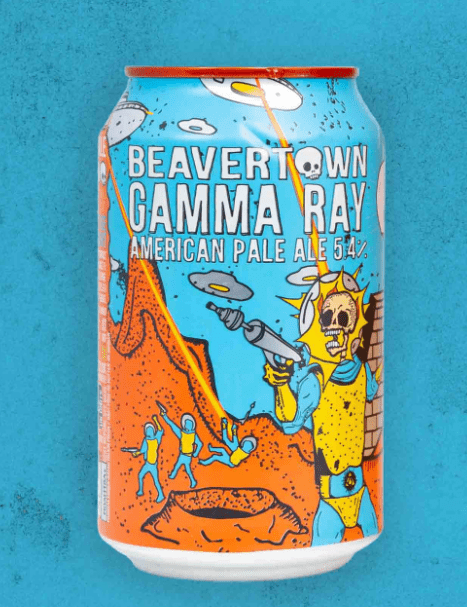 Ever wondered what the world thinks of Americans? This beer can shows you exactly how the British see us. We think they’re all posh because of that elegant accent. And we assume everyone over there talks like that, from princes to garbage collectors. They – on the other hand – think we’re all loud, trigger-happy, alien-zapping, nuclear-leaning militias.

Or maybe that’s what you’ll see after a sip of this ‘radioactively delicious’ drink. And they brewed it for our palates – it’s an American Pale Ale with an ABV of 5.4% and an IBU of 55. The beer uses Caragold, Caramalt, and pale malts. Then it’s dry-hopped for days in Amarillo, Bravo, Calypso, Citra, Columbus, and Mosaic. Its scent is tropical with grapefruit and mango. 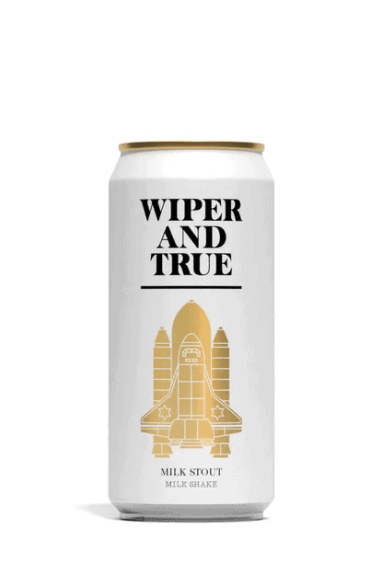 Sweet Mary Jane is a milkshake IPA, but now we want to look at a milkshake stout. Wiper & true is brewed in Bristol and its clean design is reflected in the beer itself. The beer is lactose-driven, using cow’s milk as the primary source of sugar. The beer is then enriched with cacao and vanilla. It uses massive amounts of chocolate malts to result in a creamy milkshake beer.

This beer has an ABV of 5.6% and has a creamy mouthfeel and a thick, lasting head. The white can (and its gold rim and spaceship icon) conceal a dark, silky sweetness that’s quite filling. This velvety beer has a medium body and long dry finish. It balances the sweetness of milky coffee and hot chocolate with the bitterness of hops. But the saccharine tops it all.

15. Love Among the Ruins 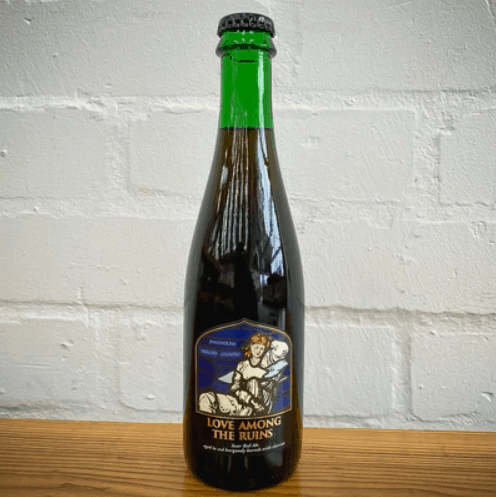 Isn’t that just the kind of melodramatic name you’d expect from Downton or Bridgerton? It’s a red sour beer with an ABV of 7%. So unless you’re in the mood for some Scotch Barley-Wine Beer, try getting amorous among in the trash. Good thing the beer tastes classier than it sounds. The beer is aged in cherry-filled barrels that were previously used for burgundy.

This sweet-and-sour wine-like beer gets its fruitiness from cherries and doesn’t use any hops. It has three barley malts though – Black Malt, Munich, and Marris Otter. It’s a wine-leaning beer so it has no head. Unusual tastes you may spot are orange peel, wood, spice … and Weetabix. Thornbridge Brewery retired this beer but you can still order it on their website.

Are there any good British beers we overlooked? Tell us in the comments and we’ll try a sip!