They say Brussels (in Belgium) is Europe’s beer capital. And here at home, Milwaukee is Beer Central. Still, if you ask the average person which country they associate with beer, they’ll probably say Germany. And a lot of American brewers got their start in Deutschland.

Start by getting familiar with the most common beer categories. Then we can check out some of the best German beer brands – preferably brands we can sip on US shores. A lot of these can be ordered on Amazon or Drizzly, but for the rest, you may need new German friends … 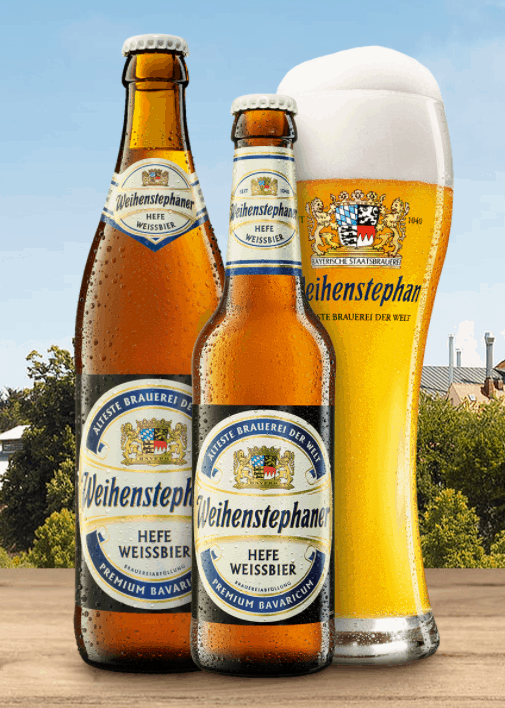 Hefe is short for hefeweizen. It’s a style of cloudy German wheat beer brewed with yeast. Hefe’s often have a bitter aftertaste from all that unfiltered haze. But Weihenstephan has a distinctly sweet palate. This may come from the saccharine hints in its aroma – banana and bubblegum. Plus, if heritage matters to you, this is the world’s oldest brewery (1040AD).

Fruity flavors come from strange places (particularly bubblegum/banana). But puzzling as the scent maybe, this beer has won multiple international awards. It has an ABV of 5.4% and an IBU of 14. The sweetness mainly comes from the yeast. Each serving – about half a liter – carries 215 calories. Like most German beers, this hefe has a thick, stable head and lots of lace. 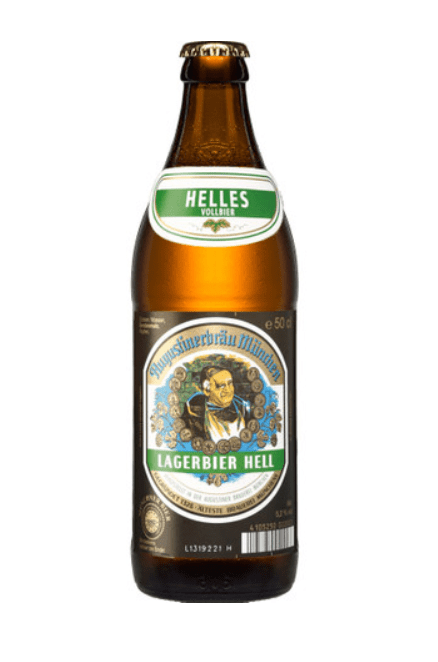 Some beer categories intersect. All pilsners are lagers, for example (but not vice versa). And all Helles are bocks … which are also lagers. But Helles are pale, full-bodied, and mostly filtered. This Helles lager is brewed by Augustiner Bräu, a German brewery that’s been around since 1621. This Munich-style beer has an ABV of 5.2% and an IBU of 22.

It’s a straw-yellow beer with a delicate nose. The carbonation is good and tingles your senses with the mingled aroma of honey, lemon, and grassy florals. Its flavor is mild and dry with a soft, bubbly mouth-feel. This Helles is brewed with in-house barley malts that include Helles light caramel and pilsner. Hallertau hops bring balance to this bottom-fermented brew.

A Marzen (or March Beer) was traditionally brewed in March then aged until October, just in time for serving at Oktoberfest. You won’t find many contemporary versions and Ayinger is up there. Marzens are lagers, so they’re bottom-fermented at low temperatures. And Ayinger is an independent German brewer. Their Marzen has won lots of indie beer awards.

Ayinger Marzen has an ABV of 5.8% and an IBU of 21. Each can has 215 calories, 2.1g of protein, 5m of sodium, and 14g of carbs. It has no sugars or fats. This beer is heavy on its barley malts with a little heat in the finish. The aroma is bready and the color is golden amber. It has about an inch of head and reliable lacing and a touch of caramel at the back. 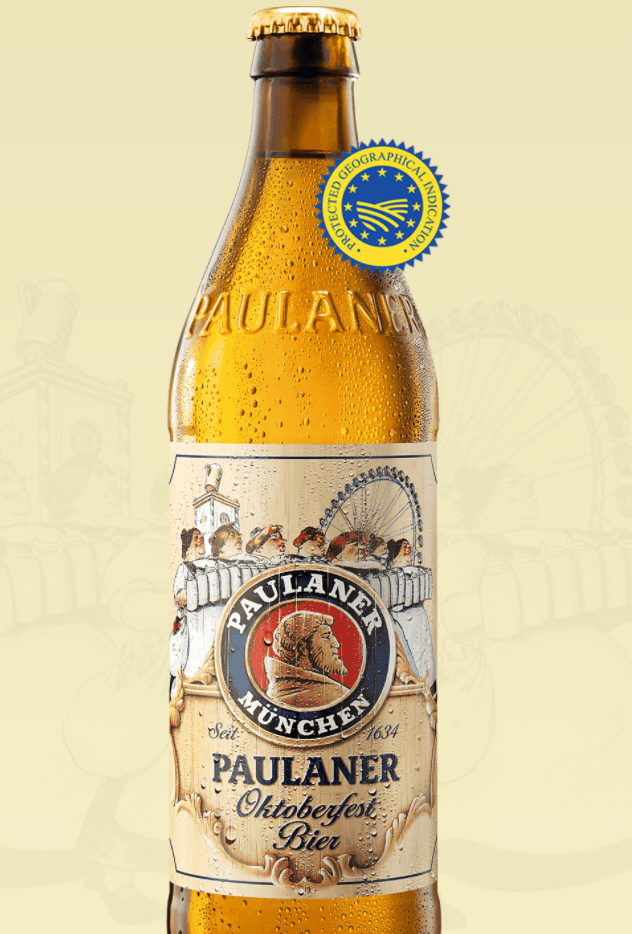 Many breweries restrict their Marzen sales to the fall. But if you want to enjoy German all year round, talk to Paulaner. Their Salvator doppelbock was first brewed by monks in 1516. The Purity Law ensured the beer was fully organic and naturally-brewed. And poverty vows meant the monks drank most of their beer. The rest was given away to poor parishioners.

Monasteries often hosted travelers so they spread stories of this magical beer. And later, they could sell some in their cloister pubs. (That’s a ‘church bar’ which raised money for religious needs.) Today’s Salvator is brewed with light barley malt (pilsner), dark barley malt (Munich), and hops that include Hallertau and Herkules. The beer has a high ABV of 7.9%. 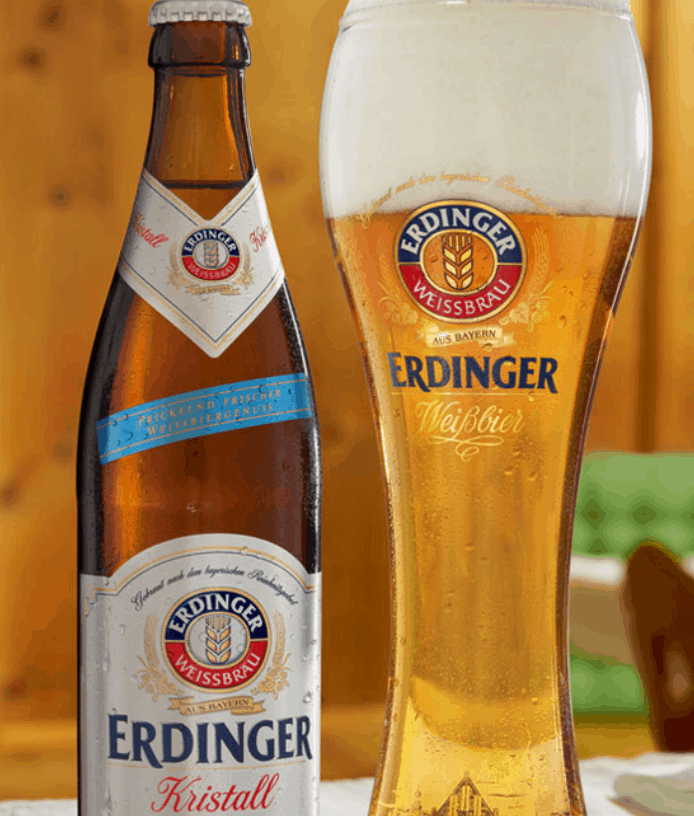 Hazy hefe’s use unfiltered wheat as a base. But some wheat beer drinkers prefer clarity. Erdinger falls in that category. Its pale gold color is gorgeously see-through due to ints intensive filtration process. And this beer has a generous frothy head. The extra fizz comes from heightened portions of carbonic acids. They give their beer an almost sparkling feel. 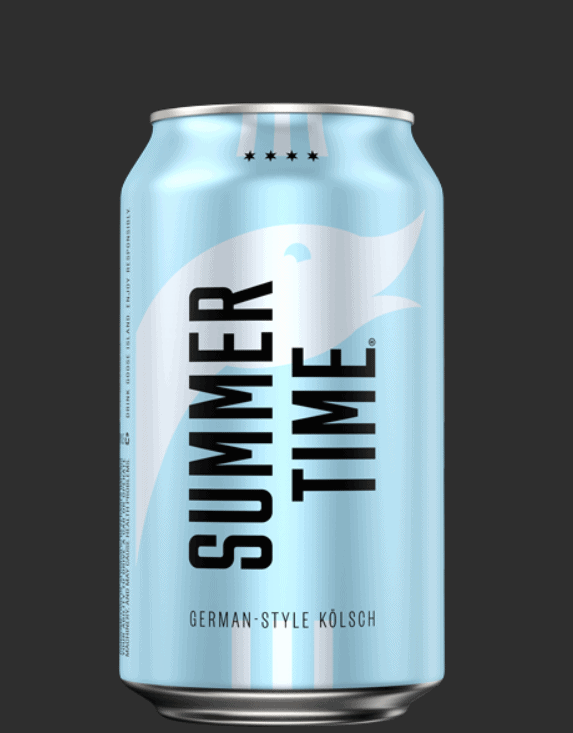 Is it still the best German beer is it’s brewed in Chicago? Maybe not, but Goose Island maintains the rules of German brewing. Their sunshine-colored German-style Kolsch uses warm-fermenting top-of-tank ale yeasts. It has an ABV of 5% and an IBU of 20. Its fruity nose comes from Saaz and Hallertau hops. The malts are white wheat and two-row barley.

The beer has grassy lemon elements with a light body and bready notes. The beer is mildly carbonated but has a thick, lingering head and reasonable lacing. The flavor is milder than the scent, which is distinctly citrusy and acidic. It has a semi-sweet start and a sour finish. You might not consider this a Kolsch since it’s brewed outside Cologne, but the taste is right. 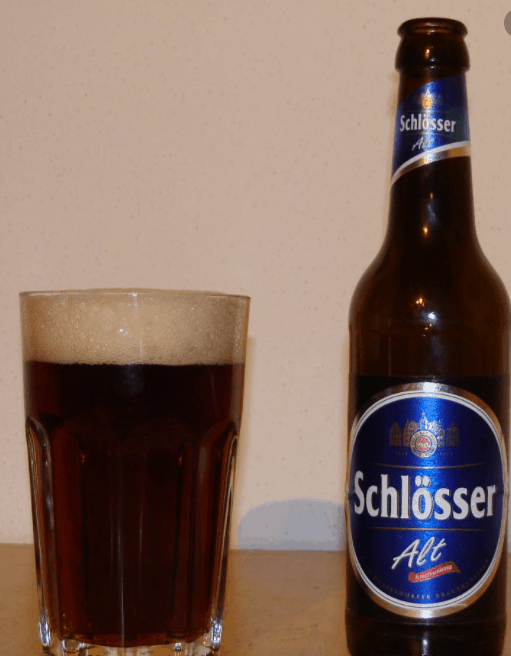 A lot of German beers are (sub-classes of) lagers. Meaning they’re bottom-fermented at low heat. Altbier is top-fermented, originally in Westphalia, Düsseldorf. Altbiers mostly use Spalt or Noble hops. The official Schlösser Brauerei (which specialized in altbiers) started in 1873 and shut down in 2002. But you can still find the beer. It has an ABV of 4.8%.

The beer is fermented with ale yeast so it’s close to traditional English Beer in taste, scent, and texture. It’s amber with lots of head and satisfying lace. Its nose has hints of toffee and caramel. Other flavor notes include nuts and toast. It has the smooth mouth-feel you’d expect from German beer and the finish has an earthy quality that’s pleasantly bitter. 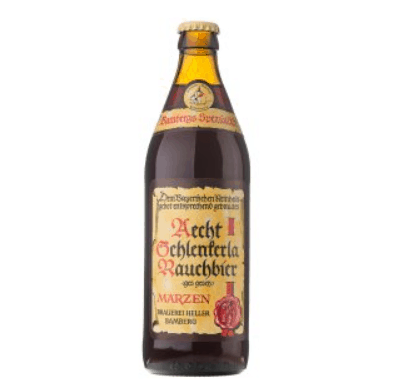 Schlenkerla means ‘smoked beer’ so technically, this beer HQ brews and serves various kinds. Schlenkerla also the name of this brewery, once known as the House of the Blue Lion back in 1405. It’s now a family-owned brewing house run by the Trum Family (6 generations and counting). But the original ‘ASR’ is a märzen aimed at the Oktoberfest crowd.

Like many German beers, it comes in a 16-oz bottle (0.5 liters). The beer has an ABV of 5.1% and an IBU of 30. Schenkerla develops smoked malt in-house and uses it exclusively in their beers. ARS is darker than some lagers and is bottom-fermented in typical Bamberg style. 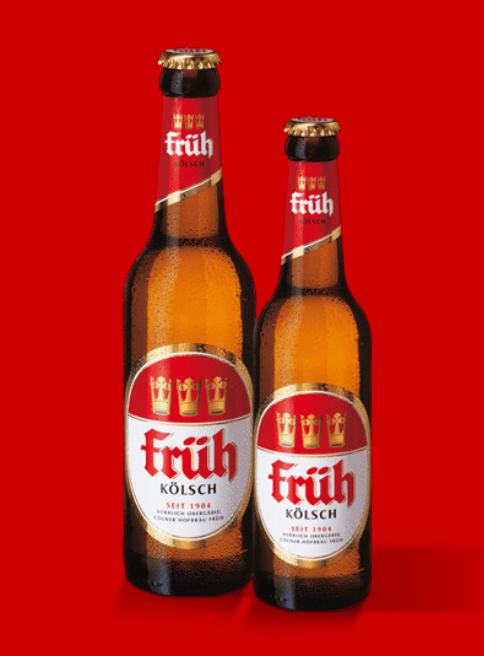 We’ve looked at a Kolsch made in the USA. Now let’s check out something from the fatherland. Fruh is brewed by Cölner Hofbräu Früh in Cologne. It’s a ‘private brewer’ that specializes in Kolsch, so we can think of it as a craft brewery. They also brew a booze-free version of the beer, as well as other styles including citrusy Radler and fruity fassbrause (aka keg soda).

Like many Kolsches, Früh is a top-fermented beer that uses ale yeast. But while most Kolsches are warm-fermented, Früh is cold-fermented so it has commonalities with lager. Other than that, it follows the formal guidelines for Kolsch-brewing. With an ABV of 4.8% and 44 calories per 100ml, it’s a sessionable beer, which is the ‘artisanal beer’ way of saying it’s safe to chug. 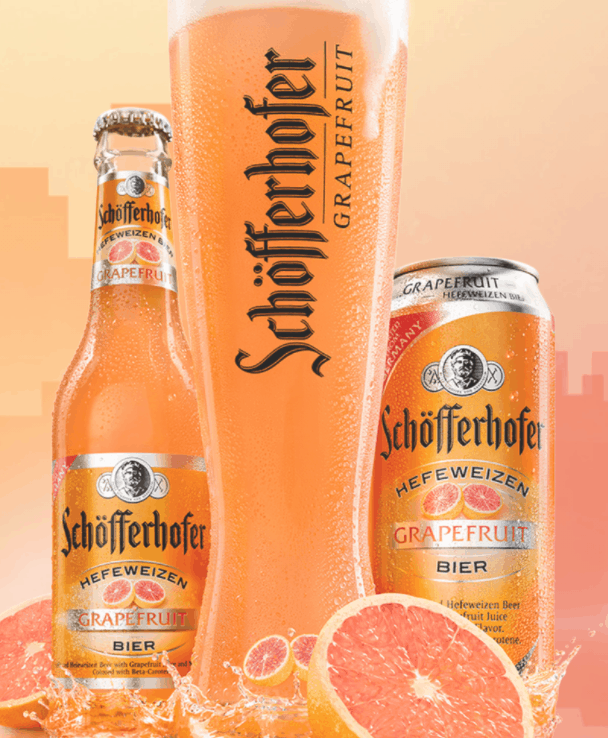 Schofferhofer is an interesting one. It’s definitely German, but while some class it as a Radler, others see it as a hefe. The brewer calls it a wheat beer mix, which covers all the bases. And it’s a low-alcohol brew at 2.5% ABV, so it’s sessionable for sure. A Radler is like British Shandy … but German. Both are ‘beer cocktails in a can – with lime juice as a citrus mixer’.

In Schofferhofer, the citrus element comes from grapefruit (or pomegranate in their second variant). Radler means cyclist, and this hefe Radler is flavored with pink grapefruit and a little clove. The beer has a biscuit nose with orange zest thrown in. The grapefruit and wheat beer balance 50/50 in every can. This hazy beer is sweet and sharp with a hint of banana. 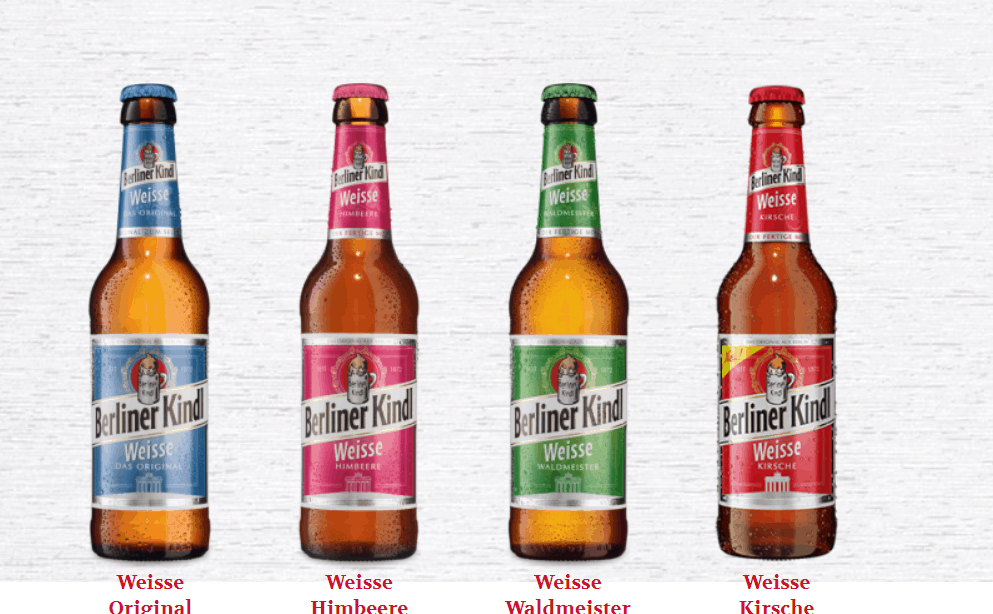 We’ve all heard of sauerkraut – a kind of fermented cabbage. But have you tried German sour beer? It infuses wild yeast and foreign bacteria into the top-fermented brew. Kindl Weiss comes in four variants – original, himbeere (raspberry), waldmeister (woodruff), and rhabarber (rhubarb). All four have ABVs of 3% and IBUs of 4, brewed with wheat and barley.

The difference is in the fruity flavor, but all are sweetened with aspartame and soured with citric acid. The beers use barley extract and hops extracts. Every 100ml has less than 30 calories, 1.6g of carbs, and under 0.5g of fat. These beers are often colored (green for walmeister or red for rhabarber). The beer is tart and tangy, based on pre-soured grains. 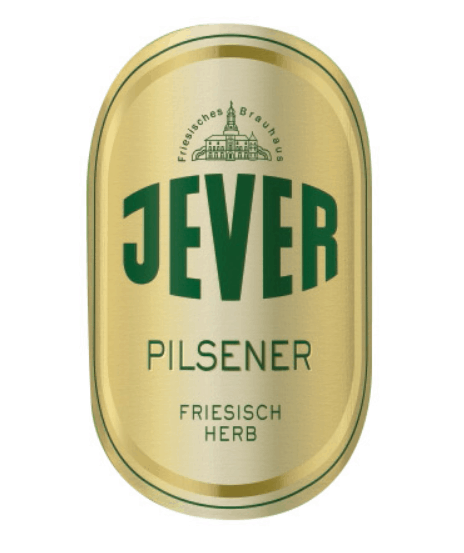 Heard of the Tower of Babel? Some say it’s why the ‘j’ in Spanish sounds like ‘h’ … while in German it sounds more like ‘y’. So if you order this beer in Berlin, you want to ask for a ‘yay-ver’. Tricky names aside, this pilsner has an ABV of 4.9%. The distinct flavor comes from the water. They mash pure gallons from the Friesian springs with Hallertau hops.

This beer does … for some reason … give you the munchies. So it’s often served as an apéritif. It’s a dry ‘herbal’ beer. Its IBU is 44 and it has a soft, carbonated mouth-feel and a hoppy finish. The name Jever comes from a farming town on the Dutch border. This beer is sometimes categorized as Friesian – beers that originate in Northern Germany. 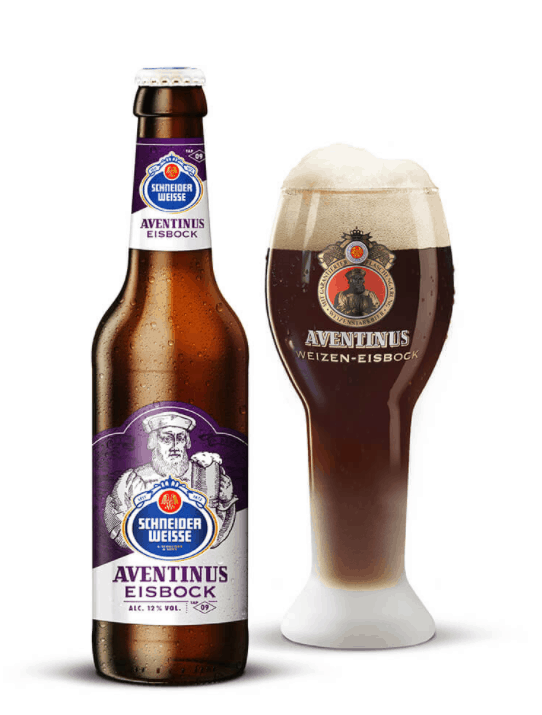 A bock is a strong lager or ale. And an eisbock is the strongest in that class. The extra potency comes from freezing an already strong bock. Aventinus is a dark drink, close to pitch black. It was first brewed in 2002. It’s a good dessert beer, served after cheese, chocolate, or tiramisu. And it’s popular offered as a digestif. With an ABV of 12%, it sits safely in the Eisbock aisle.

This beer is both dark and hazy. It isn’t filtered or pasteurized and has 7g of carbon dioxide per liter. The beer is hopped with Hallertau and Herkules. It uses both wheat and barley malts. It’s fermented in open vats before freezing and its IBU in 15. Scent and taste notes are fruity, nutty, and spicy, including marzipan, clove, banana, plum, and a bit of bitter almond. 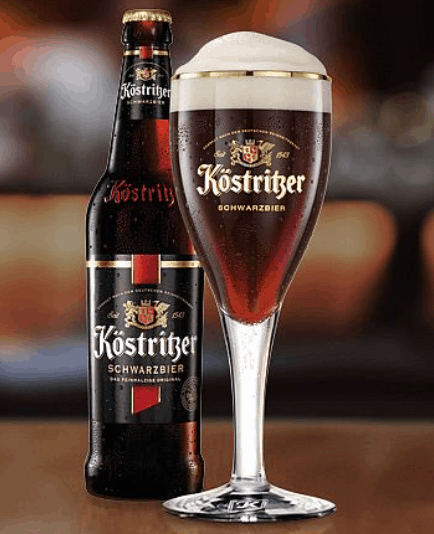 Currently owned by Bitburger, Köstritzer was one of the few breweries that thrived during the cold war. It was even allowed to export beer from East Germany. This might be because it was the Aryan answer to Guinness. The pitch-black schwarzbier was traditionally warm-fermented but later got classed a lager because it switched to cool fermentation. 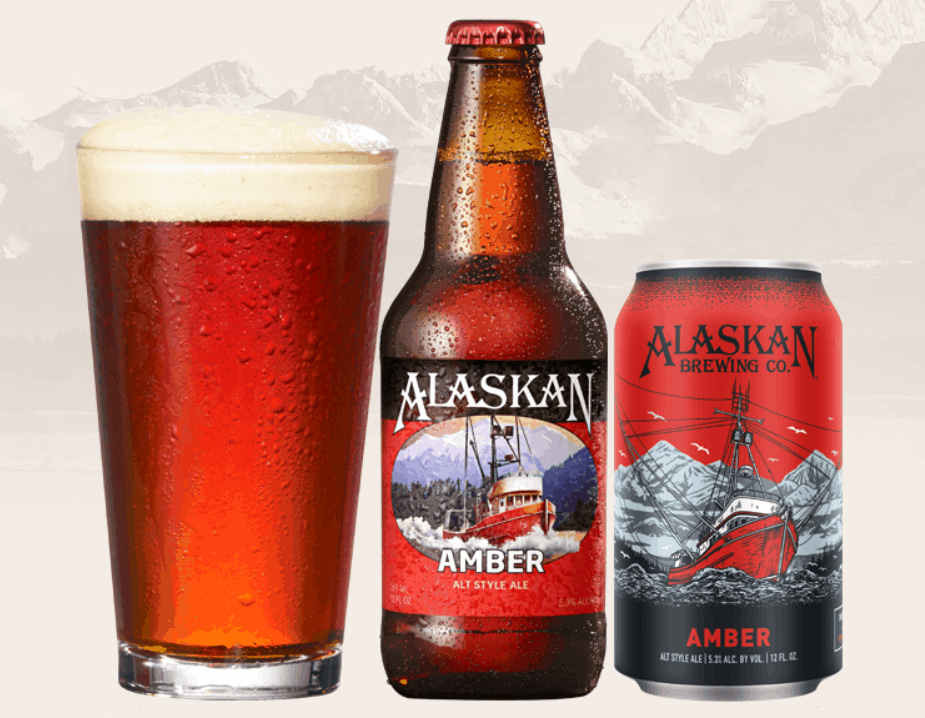 We’ll close our list with a sneaky brew … it’s German altbier … but it’s brewed in Alaska! Its names derives from the copper tone of this icy ale. And in case you hadn’t noticed, the ‘alt’ doesn’t mean alternative (though the assumption is understandable). It means ‘old’ because traditional top-fermenting methods are older than today’s bottom-fermenting ones.

The beer is known for its echoes of coffee and chocolate. The barley is pre-roasted for a malty nose and mouth-feel. It has a fine, lingering head and the flavor of bitter-sweet toasted herbs. Aromatically, it signals dark honey, roasted chestnuts, sage, dark chocolate, and fresh bread straight from the oven. All this makes it an ideal winter warmer or yuletide beer.

The fermentation process for old beer is also slower and colder than other beer styles. Alaskan Amber has an ABV of 5.3% and an IBU of 18. It has a lingering malty flavor with hops in the background. These hops are from the Pacific and Northwest while the malts are two-row and a specialty in-house barley mix. They brew using Juneau Ice Flied glacier water.

What’s your best German beer and why? Tell us in the comments and we might try it out!