Many people enjoy relaxing at the end of a hard day with a cold beer. But if you’re drinking regularly, it can add up – and that can have serious consequences for your health and relationships.

So can you drink four to twelve beers a day – how much beer is too much? We’re going to answer that question, so you’ve got the information you need to make healthy choices.

How much alcohol is in beer?

The first thing to bear in mind is that the amount of alcohol in beer can vary by brand.

There are, of course, some great non-alcoholic beers out there. But if you’re drinking alcoholic versions, make sure you know how strong they are.

To do that, look at the alcohol by volume (ABV) displayed on the label. The higher the number, the more alcohol it contains.

Low-alcohol beers usually have around 3.6 percent of alcohol by volume. Standard beers have about 5 percent. And some Belgian beers can have as much as 11 percent.

So how do you know how much alcohol you’re drinking?

All that variation means it’s hard to say how much alcohol there is in “a beer”. And as well as the ABV, serving size can vary too. A standard bottle of lager contains 330 milliliters – but bottles can vary. Cans can contain 330, 440, or 500 milliliters. And a pint, of the kind served in British pubs, is 568 milliliters.

All that means it’s not easy to know exactly how much alcohol you’re drinking. But you can calculate it, as long as you know the ABV figure and the volume of drink.

The way you do this is the same as you calculate any percentage. Start with the volume in milliliters, then multiply it by the ABV figure divided by ten. That will give you the amount of alcohol in milliliters that’s in your drink.

So if you were drinking a 330-milliliter bottle of beer, with an ABV of 3.6, the calculation would be:

How much alcohol is too much?

Now you know how much alcohol is in your favorite beer – but how much is too much? And do you really need to get out your calculator every time you want a drink?

The good news is that there are easier ways to check your alcohol consumption! That’s where the idea of units of alcohol comes in.

Units are just a different way of talking about the amount of alcohol you’re drinking. One unit is the same as 10 milliliters of alcohol.

It’s recommended not to drink any more than 14 units of alcohol a week. (And if you’re a pregnant woman, it’s advised to stay clear of alcohol altogether.)

Some health organizations recommend different maximum amounts for men and women. But everyone’s body is different. A single figure is just as effective at giving an idea of what level of alcohol is low risk.

How many units of alcohol are in beer?

There are 2 units of alcohol in one pint of lower-strength beer – that’s beer with an ABV of 3.2 percent. If your beer is higher strength – around 5.2 percent ABV – that rises to 3 units.

So you could have up to 6 pints of normal, or 7 pints of weaker beer each week and stay within the guidelines. If you’re drinking stronger beer, you should stick to 4 pints per week.

If you’re drinking bottled beer, normal strength options mean you’ll be consuming 1.7 units of alcohol with each bottle. A 440 milliliter can of normal strength beer contains about 2 units. In either case, don’t drink more than 7 in a week.

And whatever type of beer you’re drinking, neither 4 nor 12 beers a day is a good option! In fact, it’s the way to a whole range of problems with your mental and physical health.

Almost as important as how much beer you drink is the way that you drink it. Saving up your weekly alcohol allowance for a big night out isn’t a good idea!

If you’re drinking 14 units every week, it’s best to spread these out over a few days. A pint of weaker beer at the end of each day is lower risk than binging on a Saturday night.

Drinking heavily in one session means the alcohol will impair your judgment. That might mean you’re more likely to get into risky situations or lose control. It also increases the likelihood of accidents and injury.

Spreading out your alcohol intake over the week is much less likely to bring any of these problems. And if you drink this way, you’ll also escape the dreaded hangover!

What if you’re going out for the evening?

If you’re going to be drinking beer on an evening out, there are ways to reduce its impact. The most obvious one is to drink less!

Pro Tips: It’s a good idea to switch between beer and water. The water will make sure that you stay hydrated, minimizing the risk of the horrible hangover headache. And if you’re drinking a glass of water for every other round, you’ll also consume less beer – and alcohol – overall.

Another easy option is to switch to lower strength or non-alcoholic beer. Alcohol-free options will give you the appearance and taste of beer, but without the side effects. Just remember that low-alcohol beers do still contain alcohol – so take that into account when keeping track of your drinking.

What are the health impacts of heavier drinking?

If you’re regularly drinking more than 14 units of alcohol a week, you’re at greater risk of a host of health problems.

And it doesn’t stop there. Too much alcohol can affect your sleep and mood. And because it can change the way you behave, it can also damage your relationships with other people.

What about health benefits?

So when it comes to beer and your health, is it all bad news? Well, not quite.

There is some evidence that low to moderate consumption of beer can lower the risk of cardiovascular disease. That’s right – too much alcohol increases the risk, small amounts appear to lower it.

But it remains the case that drinking above the guideline of 14 units increases your risk in all the ways we’ve discussed already. If there really are benefits to drinking small amounts of beer, stick below that limit. You’ll still get those benefits, and you’ll limit your exposure to other health risks.

What can you do if you need to cut down?

If you’re worried about your drinking, or just want to cut down, there’s lots of help and advice online. And you’ll also find organizations that can give you tailored and one-to-one support.

One simple thing to do is to start thinking about your drinking in terms of your weekly limit. If you drink other alcoholic beverages alongside beer, check how many units they contain.

If you’ve got a favorite beer, you can calculate exactly how many units of alcohol it contains. Or you can get a rough idea using a simple guide. For normal strength beer, remember, you can have up to 7 bottles or cans a week, or 6 pints.

When you do drink beer, pace yourself. Savor the flavor. And if you’re drinking socially, remember that you don’t have to get another drink every time someone else does.

If you’re not sure how much you’re drinking, try keeping a diary. Note down every time you have an alcoholic drink. Keep the diary for a few weeks and then take a look at it. If you’re not happy with what you see, you can take steps to change it.

What about non-alcoholic beers?

You can avoid all the problems associated with alcohol consumption by switching to a non-alcoholic beer. Although they were once hard to come by, there’s now a huge array to choose from.

From IPA to craft ale, to wheat beer, there’s a huge range of great flavors out there. Some are made using yeast-free brewing processes to avoid the alcohol being created in the first place. In other cases, the alcohol is removed after brewing.

Those in the know say that the former gives a better flavor. But why not check some out for yourself? There are lots of reviews online, taking you through the flavor profiles of different non-alcoholic beers.  And they’re every bit as refreshing as the alcoholic versions.

Time for a beer?

That brings us to the end of our look at the question of how much beer is too much. We hope we’ve helped you make an informed choice about how much you drink. Stick to those guideline amounts, and you’ll reap the benefits of better physical and mental health. 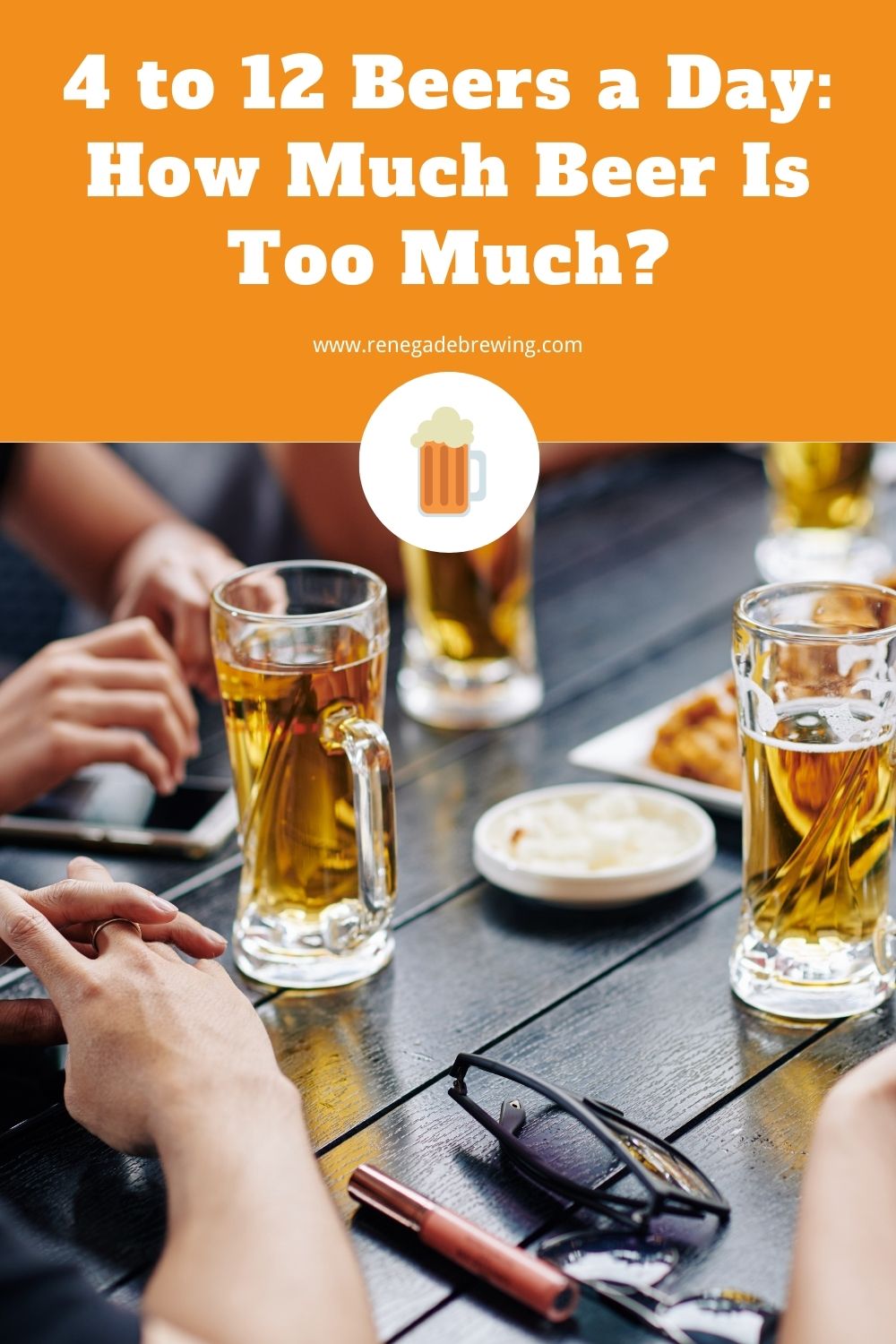