As counterintuitive as it may seem, stale beer has its own perks. If you find yourself with too many opened cans of booze, you can actually put the leftovers to good use around your house. So, instead of pouring out those suds, why not learn how to make beer stale for later DIY uses.

What you will need:

Beer does not expire or go bad in the way that milk, for example, would. Even beer that has been left open will not expire but it will lose its flavor and aroma, leaving you with what tastes like a flat beverage. This is what is meant by beer going stale.

Here are some tips to make beer stale:

Exposure to oxygen will quickly change the profile of beer. When beer is exposed to oxygen, oxidation takes place causing the beer to develop a cardboard-like flavor sometimes with underlying notes of sherry, toffee, or bready flavors. Oxidation will also cause beer to lose its hoppiness and mouthfeel, resulting in what would be described as a flat beer.

Step 2. Leave it out at room temperature

There is a reason no one likes warm beer—that’s because even the richest most flavorful of them will taste flat unless chilled. One way to make your beer lose its freshness is to leave it out, opened at room temperature. The atmospheric warmness will not necessarily cause staleness on its own but it will hasten the process of oxidation, which leads to staleness.

Light is another culprit. Beer doesn’t do well when it is directly exposed to light. Most brewers bottle their beer in dark or colored bottles or aluminum cans to block out light. To make your beer stale, simply store it in a clear jar or glass bottle and leave it in the way of direct light. When alcohol is exposed to light and oxygen it will develop a skunky flavor and aroma. 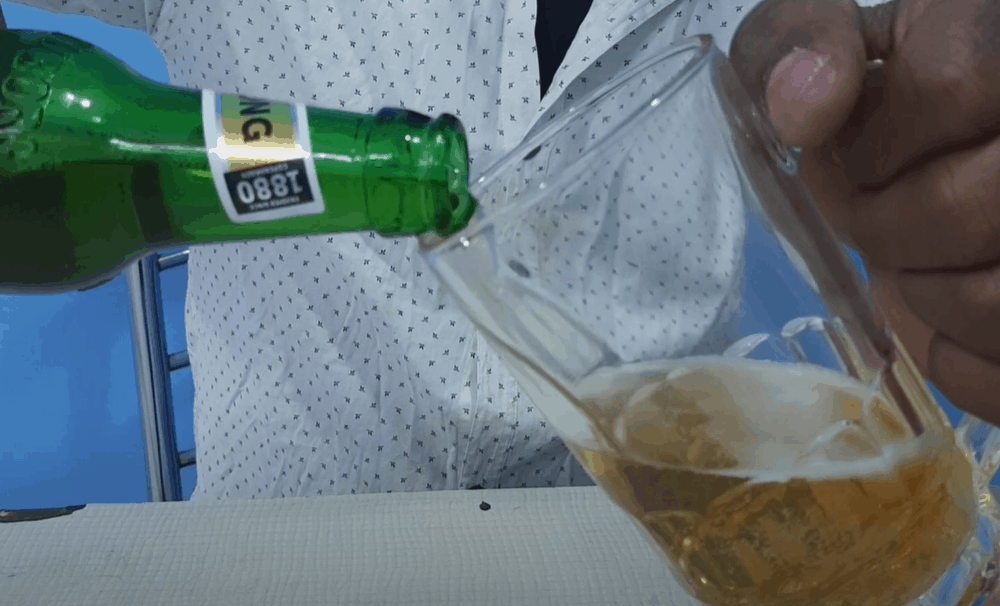 If you need de-carbonated beer i.e. stale beer within the shortest time possible, for example, for a recipe, you can take matters into your own hands and de-carbonate the beer yourself. Follow these simple steps to quickly remove carbonation from beer:

This process will result in oxidation, causing the beer to lose its crispy, carbonated mouthfeel.

That’s all it takes to make beer stale!

Next, let’s take a look at some of the clever ways you can use stale beer.

1. Get Rid Of Stains

Beer and stain removal might not seem like a good pair but your favorite booze can come in handy in getting rid of many types of stains.

If you have little ones who are prone to staining the carpet or seats or you have a knack for knocking over your cup of coffee, you should definitely have some stale beer on hand to kick out stubborn stains when they happen.

Follow these steps to get rid of stains using stale beer:

The idea of pouring beer on your hair sounds unusual. But, hear us out… the theory is that the hops and malt in beer help to boost cuticles, which can lead to stronger and thicker hair.

The idea here is to use flat or stale beer that does not contain carbon dioxide. When carbon dioxide (CO2) combines with water, the water becomes hard and the shampoo will not lather well enough to thoroughly clean your hair.

Obviously, you do not want to wash your hair with beer every day. Spare this special treatment for a once-per-month cleansing and pampering session.

So, let’s get to the interesting part of how to clean your hair using beer. Follow these simple steps:

As mentioned earlier, limit the use of beer for conditioning your hair to just once or at most twice a month. Too much beer in your hair can cause dryness, breakage, and dandruff.

Did you know that critters such as bugs and mosquitos are attracted to beer? Turns out humans are not the only fans of booze! So, instead of pouring that leftover beer down the drain, why not use it as a natural repellant.

To make DIY repellant, pour the stale beer in buckets and place them outside in the open, for example, in your backyard where mosquitos like to hangout. The critters will be attracted to the booze and in turn, leave you alone. Talk about a win-win!

4. Lay A Trap For Snails And Slugs

If you are looking for a natural way to get rid of slugs and snails in your garden, laying a stale beer trap is the way to go. Here is what you need to do:

Are you dealing with a browning lawn? Brown patches take away from your home’s curb appeal but you can restore it using readily available supplies, including stale beer. Follow these simple steps:

The dishwashing liquid helps the grass to absorb the nutrients in the lawn food. The ammonia is a source of nitrogen, which helps the roots of the lawn grass to grow. The beer and molasses provide yeast and sugar, which are a source of food for the microbes in the soil and which further help to nourish the grass.

From BBQ sauce to beery chicken, marinade, and even bread, flat beer has many culinary uses. A tinge of malty, sherry or caramel-like flavors can turn an ordinary recipe into a scrumptious meal. Try a couple of recipes that use beer and wow the crowd at your next potluck.

Now that you’ve learned the many ways in which you can use flat beer, let’s get down to the actual process of making beer stale.

Who knew that keeping some skunky beer at hand could be beneficial? From the kitchen to the garden to personal grooming, stale beer has many surprising uses. The good news is that whatever you need your stale booze for, you can whip up the flat beverage in a few minutes and put it to use.

Have you tried using stale beer before? How did that turn out? Let us know in the comments!