In case you are up to brewing by yourself, a hydrometer is an essential tool in detecting and measuring the brewing itself. Once you decide to brew beer, a hydrometer will help you determine if the brewing process is over. Then, it is time for the bottling and drinking process to start.

Many of you may give up brewing immediately by thinking that using a hydrometer will be complicated and tiresome. The method is no piece of cake but also not that hard. Grab paper, pen, and calculator, and let’s see how to use a hydrometer correctly. 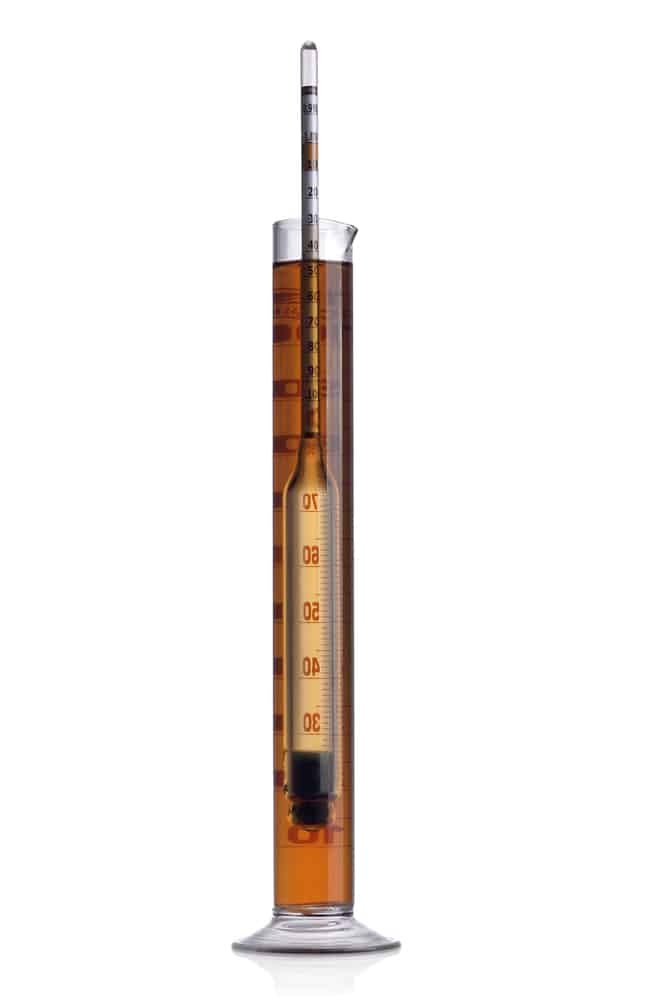 The hydrometer is the measurement tool for determining the liquid density. If you know that the water density is always 1,000 units or one, depending on the hydrometer itself, you can quickly calculate the precise value for other liquids. If you add anything to the water, it will have a higher density.

As you have already known, brewing beer includes the process of fermentation. It includes sugar dissolving and making alcohol under the influence of yeast.

At the beginning of the brewing process, the liquid will be denser because of added yeast, sugar, and other supplements into water. As time passes by and the sugar dissolves, fermentation will cause decreasing the liquid density.

You need the hydrometer to measure the density level of the liquid during the process. When it shows the same value two days in a row, that means the fermentation process is over. There is no more sugar to dissolve, and you can start drinking your favorite beverage.

I recommend you keep the brewing process records in a special notebook or piece of paper. These notes will be helpful in the future since you can compare them to improve beer preparation.

How Does Hydrometer Look?

There are different sorts of hydrometers, but they all have the same basics. The device features a one-part thermometer that you need to sink into the liquid. It will act as a buoy and float in the liquid. 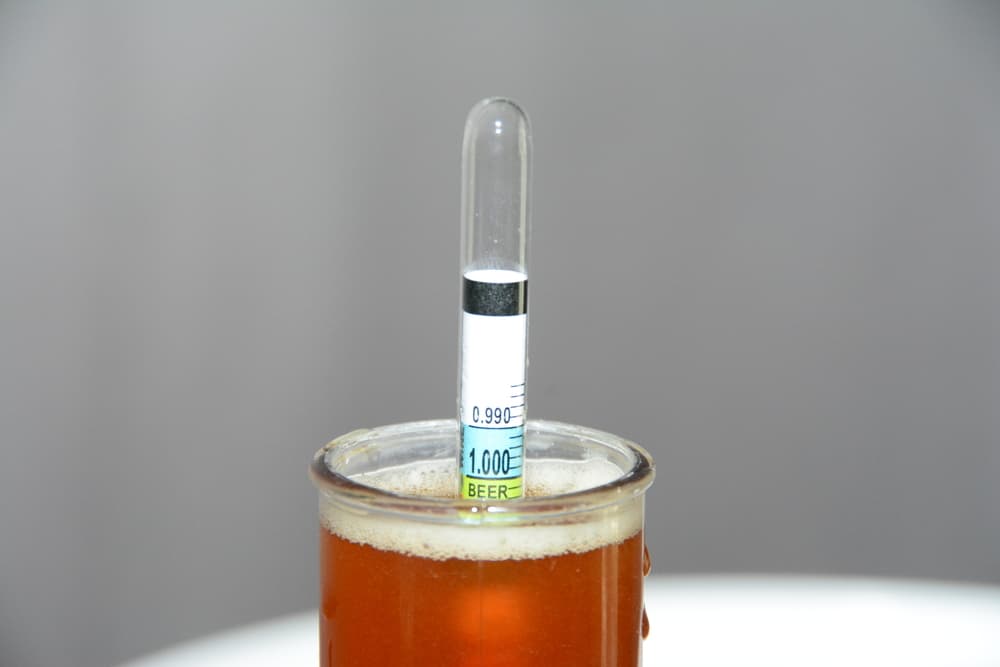 A scale along the hydrometer length represents the density value, also known as SG (specific gravity). The water’s specific gravity is from 0.999 or 999 for pure water to 1.003 or 1003 for tap water. You need to use this number to calculate the brew gravity, comparing it to the SG of water.

As I have mentioned above, the brew’s gravity will be higher when the process starts. That means the hydrometer will float and show a different number than the one when you sink it into the water. You need to measure and record numbers that you see on the scale. Make sure to note numbers where the liquid touches the scale.

Remember that hydrometers are not big. With too many numbers on them, they will be unclear for reading. That is why some devices differ in the scaling numeration.

Always read the instructions carefully before using the hydrometer to discover how to use it. You will find necessary explanations about the scaling system numeration in the manual.

You will also find a deep vessel in the hydrometer kit. Use it to pour your brew, and then put a hydrometer inside. Always keep in mind that each opening of the brew may cause contamination with bacteria or other yeasts.

Therefore, hygiene is of the essence. You should always use super clean equipment and never put back the sample you measured. That way, it won’t spoil over time.

What SG, OG, and FG Stand For?

These are the markings that you will often encounter in beer recipes, instructions, and calculations. Therefore, you should better get familiar with them. I have already mentioned the SG (special gravity), but OG (original gravity/density) is crucial in brewing.

Original gravity shows if the beer has achieved the desired ABV. Most 5% ABV beers have an OG around 1.050. However, some light beers rarely exceed 1.030, while some bigger beers can surpass 1.100.

The moment you mix all the necessary ingredients for brewing, the gravity will rise as the liquid becomes denser. OG is the number you measure on the first day of brewing. It is vital to mix the liquid thoroughly before measuring to gain the most precise OG number. Then, take the sample and shake it a bit in the hydrometer vessel.

That way, the bubbles, and foam will disappear. It is a moment to use the hydrometer. You shouldn’t forget to write down the number in your notebook, as you will need it later for calculations.

FG (final gravity) is the number you will write down after the last measuring when the brewing process is over. FG should be lower than OG as the fermentation is over, and there is no sugar left in the brew.

At the same time, its value should be higher than the SG of water. Remember, the brewing is over once you get the same hydrometer readings two days in a row.

How to Calculate Alcohol Percentage of Beer?

Once you have OG and FG numbers, you need to apply the formula and calculate ABV. Several available approaches are almost the same, but I will give you the most common two.

This formula is suitable for hydrometers with 999 to 1,000 markings for water. The first thing to do is to calculate:

When getting this number, you should add 0,5 because of the secondary fermentation in the bottle. The final number is ABV. If the OG is 1,043 and FG is 1,013, the equation will look like this:

It is the ABV value if you drink beer right away.

As I have already mentioned, there are several types of hydrometers and markings. This formula is suitable for hydrometers with markings from 0.999 to 1.003 for water. In such a case, you should apply this formula:

This example is without adding 0.5 for brewing in the bottle. As you can see, the calculations are almost the same. Therefore, pick the one it suits the best for the hydrometer feature and units.

As highlighted above, hygiene is of the essence, so the equipment should be impeccably clean. So, you shouldn’t open the brew too often, except to take measurements once a day.

Once you see the same result for SG in two days, you will know that the fermentation is over. Then, you need to get the correct FG number before pouring brew in bottles.

Some brewing kits require a specific temperature to operate correctly. That means you don’t need to do any extra calculations regarding OG and FG numbers if your brew’s temperature is the same as in the manual.

On the other hand, you will need to calculate a bit more if the temperature differs by more than a few degrees.

Here is the table of degrees in Fahrenheit and Celsius to help you understand the calculations. The more precise tables are usually included in manuals to help you brew the best possible way.

In the case that you need to correct the OG and FG, you should use adequate equitation. For instance, OG you measured is 1.043, and the temperature is 50 F (10 C). You should add the number 0.0006 from the table in the row for that temperature value.

Now, you should make the same changes with FG, depending on the brew temperature during the final measuring. Once you get the correct numbers according to temperature, you can do the precise calculations of your brew ABV.

I hope that the hydrometer use is clear and understandable now. The first time can be tricky because every first try is usually a challenge. Remember that ancient Egyptians brewed beer 7,000 years ago without a hydrometer.

I suppose that it is much easier now. Once you get into the calculation and measuring routine, brewing the beer will become a piece of cake. Right?