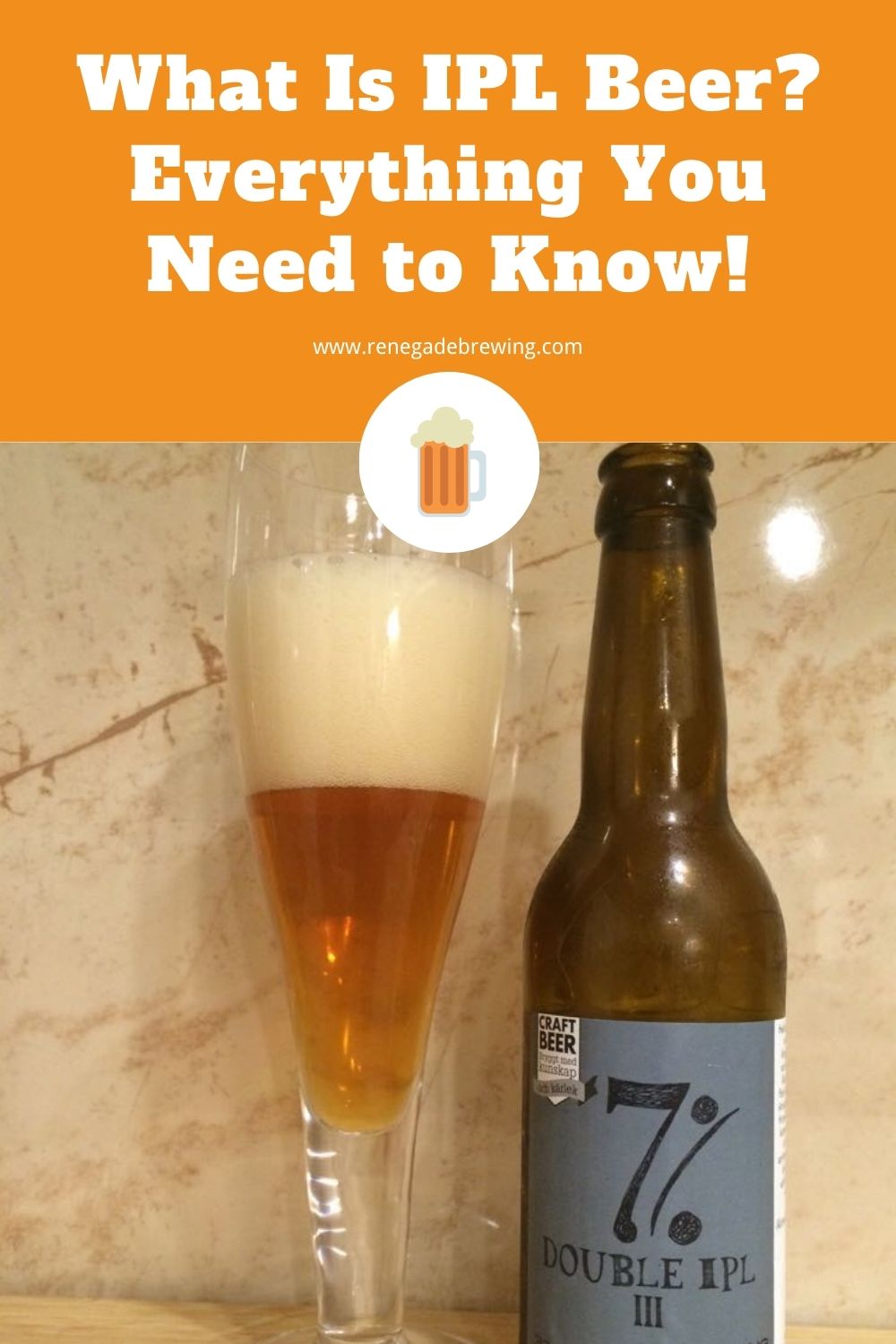 The world of beer is awash with a dizzying number of styles, flavors, and aromas. One type of beer that might have piqued your interest is the IPL, or India Pale Lager.

So, what exactly is an IPL beer and how is different from other popular varieties such as IPA, ales, lager, pale ales and others? In this article, we cover everything you need to know to know about IPL beer and we even suggest some food pairings to try! Let’s get straight to it.

Before defining what an IPL beer is, let’s get the basics out of the way first. In the late 19th century when beer brewers discovered they could culture pure yeast, they divided beer into lagers and ales.

The difference between lagers and ales is in the fermentation process. Lagers are made under a slow, cold fermentation process that uses larger yeast to produce a clean, crispy beer. Ales on the other hand are fermented using a warm process using ale yeast. The result is a fruitier, mellower beer.

There isn’t much of a difference between the methods used to ferment India pale lager and regular lager. The most significant difference is that India pale lagers contain a generous amount of hops derived from the Pacific Northwest. These hops give the IPL its distinct taste, which is a bit different from other types of lagers.

So, what is IPL Beer?

In essence, India Pale Lager is a type of beer that is fermented with lager yeast instead of ale yeast. IPL beer is moderately hoppy with a deep amber to dark brown color. In terms of flavor, IPL beer is clean with a crisp finish. The flavor is derived from the type of hops rather than the yeast used in brewing the beer.

That said, in some circles, IPL is not really considered an actual style of beer and this is because it is not part of the Beer Judge Certification Program (BCJP) Guidelines.

As such, there is no standard set of brewing best practices or ingredients associated with IPL beers. Many view this type of beer as an American India Pale Ale fermented using lager yeast.

What is the Difference Between IPA vs IPL

India Pale Ale, IPA, has been in the beer scene for quite some time. Later, brewers began to produce hoppier beers using lager yeast rather than an ale yeast.

India Pale Lagers, IPLs, are mostly associated with the craft beer movement and though this beer hasn’t been around for too long, it is definitely catching on among beer enthusiasts.

So, let’s take a look at some of the differences between these two categories of beer.

All beers are made from the same basic ingredients: yeast, water, malt, and hops. However, the variation in the type of yeast used and the amount and variety of hops added to the mixture will affect the taste and aroma of the final beer product.

When it comes to IPAs and IPLs, you will notice a big difference between their levels of bitterness. IPAs typically contain a large number of hops and can have 40-60 IBU or more.

Lagers such as the IPL are not as hopped and will be less bitter and linger in the range of 20-40 IBU. IBU stands for international bittering unit and is the standard method for determining the bitterness in beers.

During fermentation, and specifically, primary fermentation, brewers usually allow lager to warm up a bit for a few days as the fermentation process comes to an end but this is not usually necessary when brewing an ale.

This waiting period is known as a diacetyl rest. Ales that have been fermented at a slightly lower temperature than usual are sometimes allowed a diacetyl rest too.

Another difference between lagers and ales is the time it takes to ferment the two types of beer. Usually, fermentation of lager takes longer than that of ale. This can be attributed to the temperature differences.

Indian Pale Lager is a broad category of pale lagers, an increasingly popular beer style. Under the IPL umbrella, you will discover other types of lagers each with its own taste and flavor to suit your preferences. Some examples of pale lager include:

Other lager styles include:

Among the many IPL beers available, you will notice that some are labeled ‘imperial’ and others are labeled ‘session.’ What do these labels mean?

The use of the word ‘imperial’ to describe beer dates as far back as the 1800s. This term specifically referred to beer that was made in England and shipped to the imperial court in Russia. Later, the term imperial was used among beer elites and brewers to refer to luxury beers.

In modern times, the word imperial has made its way back to the modern beer scene. In particular, craft brewers use this term to describe any kind of beer that is perceived as bold.

In imperial beers, the amount of malts and hops used is twice or even thrice the usual amount, resulting in a particularly strong beer with an alcohol by volume (ABV) rating ranging from 8 to 12 percent.

Session beer is another term commonly used alongside IPL beer. Session beer simply refers to any type of beer that contains no more than 5 percent ABV. These beers are popular for their character, which balances between hop and malt, resulting in a strong but drinkable beer.

While imperial IPLs tend to be on the higher end of the ABV spectrum boasting a high alcohol content, IPL session beers are more well-rounded and allow you to drink more beer without getting too intoxicated.

Beer makes for a fantastic accompaniment alongside a variety of meals. If you love the extra hoppiness of IPL, try out these food-pairing ideas:

When you bring together lager yeast and lager brewing techniques with big IPA hops, what you get is India Pale Lager.

IPL beer is not necessarily the most popular of beer styles but it is definitely an option to try if you are after a light, refreshing, crisp and clean beer flavor.

The drinkability of IPL beer further makes it wonderful accompaniment with meals or an after-dinner treat. 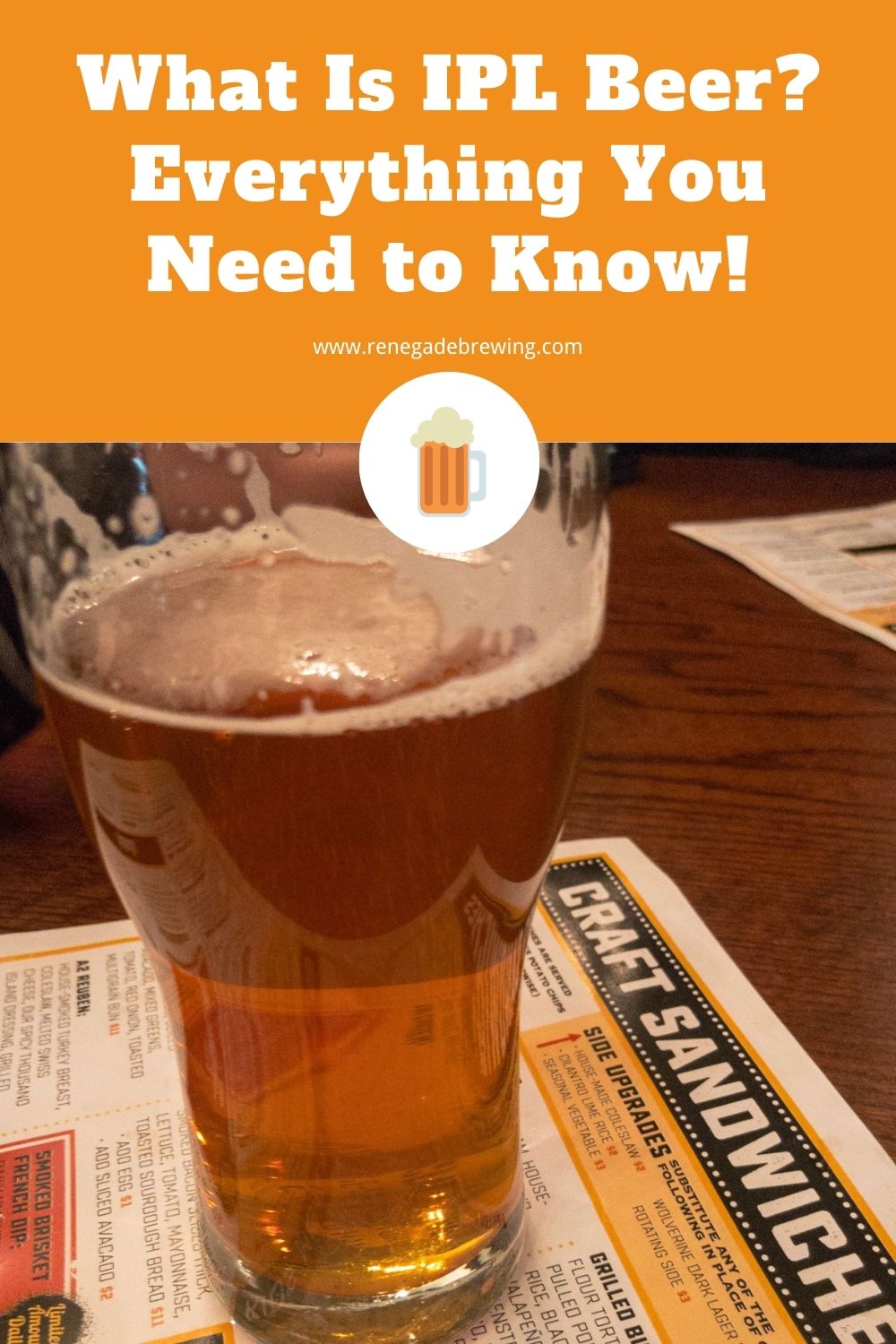