While half the world is worried about nut allergies, a good portion is getting into peanut butter beer. It’s a good alternative to the anti-gluten-brigade, but only if you buy a pint without wheat or barley. You may have heard peanut butter was invented by a black man.

George Washington Carver doesn’t hold the patent, he invented over 300 uses for this deliciously nutty treat. So let’s take a look at some top brewers as we define the best peanut butter beer. Just be sure to take a test before you sip. And have an EpiPen handy just in case! 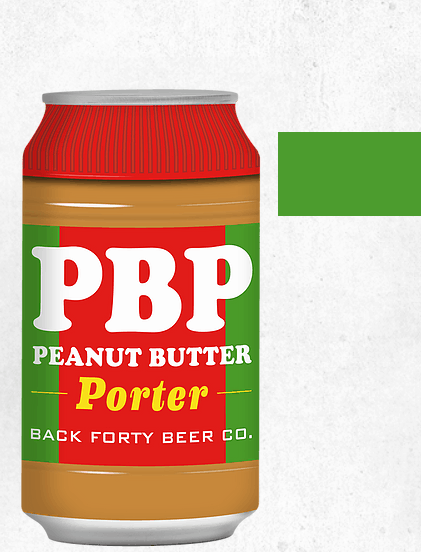 This craft beer company has a quirky heritage. Their name – Back Forty – has several intentional puns. The back forty acres are the section of the farm that’s furthest from the barn and therefore hardest to maintain. That section of the farm is often neglected and underestimated, just like craft beers in general and Back Forty Beers in particular.

It could also refer to your ‘second season of life’ aka ‘life begins at 40’. So Back Forty Beer is about glorifying underdogs. The company brews lots of different beers. Their PBP is full of creamy canned goodness with an ABV of 10.5%. This dark brew is flavored with Apollo hops and a variety of malts that include chocolate, midnight wheat, C-60, c-80, and two-row. 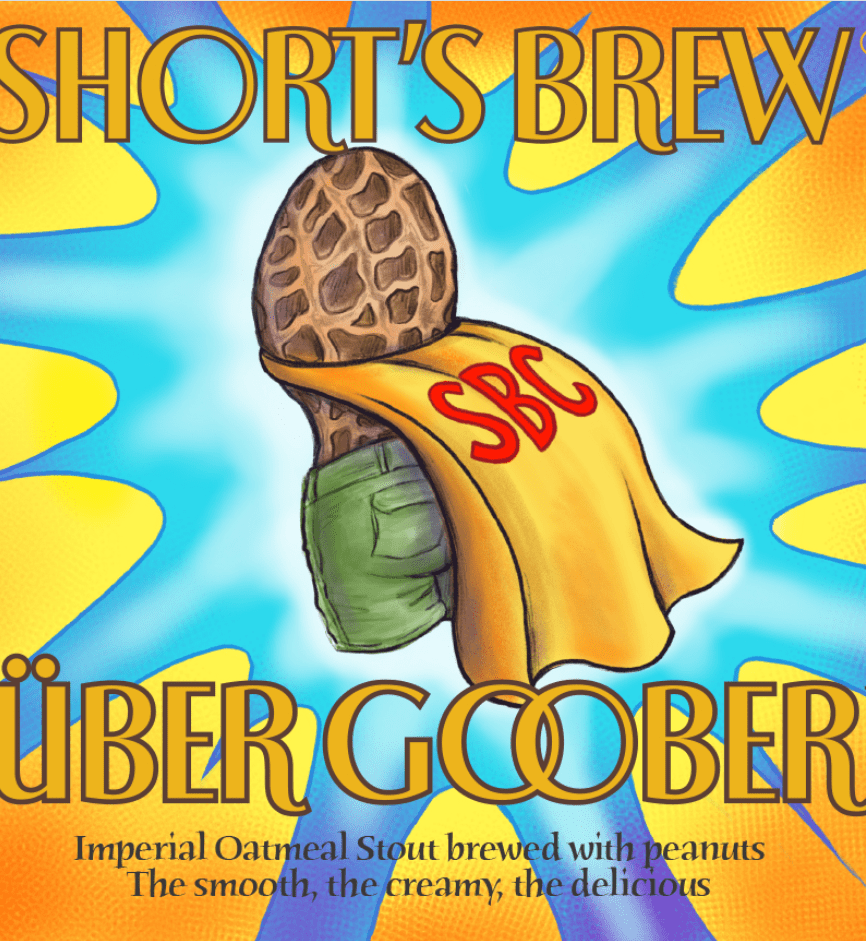 Peanut butter beers are largely artisanal. So yes, they’ll have those weird names. And while defining craft brewers gets trickier every day, Joe Short is serious about his business. He registered his company at 22 after working at Michigan Breweries. Joe and his friends renovated a hardware store that was 120 years old and made it their headquarters.

Uber Goober has an ABV of 8.2% and an IBU of 30. It’s a pitch-black beer with an oatmeal base and peanut butter flavoring. Short’s taprooms sometimes blend it with Soft Parade for a filling PB&J Beer. But even if you prefer it plain, the creamy chocolate of this pitch-black stout is beautifully balanced with its nutty tones and mocha head. It’s smooth and aromatic. 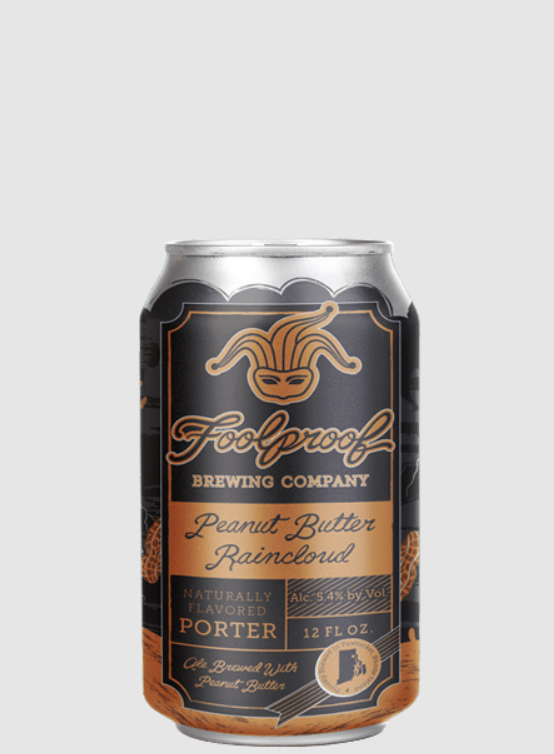 When Nick Garrison decided to play with peanuts, he started with a popular in-house porter called Raincloud. He added dehydrated peanut butter powder to the fermentation tank for full infusion. The powder used is 100% pure peanut with no additives or chemical interference. Peanut Butter Raincloud has an ABV of 5.4% and it’s on the heavier side.

The beer has a hoppy finish. Its lace is sufficiently sticky and the beer gives a good one-inch head –  but only if you pour it properly. Its aroma is rich, oily, and nutty. But unlike some of the best peanut butter beers, this one’s flavor echoes dark, bitter, unsweetened chocolate. The color of this beer is close to black and the texture is smooth, creamy, and slightly bready. 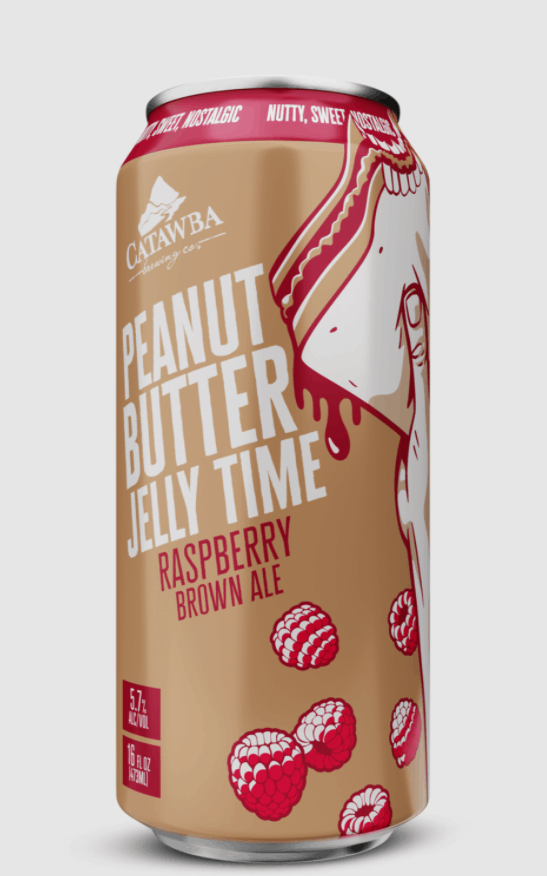 This brewery is named for Catawba River and is run by ‘the Pyatt Boys’ – Billy and Scott. They started brewing in their childhood neighborhood in 1994 before formalizing their craft brewery in 1999. These family-oriented beer lovers have a special story behind their peanut butter brew. They came up with the recipe for Peanut Butter Jelly Time in the child’s honor.

Also Read:  29 Common Types of Beer You May Like

The little boy – who often had bits of PB&J on his chin – died in an accident. So his parents’ pals came up with this raspberry brown ale as a tribute. This brown ale sits on whole roasted nuts and raspberry puree for full infusion. The beer’s ABV is 5.7% and an IBU of 10. Its malts include Munich, pale caramel, and flaked wheat. The porter uses Fuggle and Magnum hops. 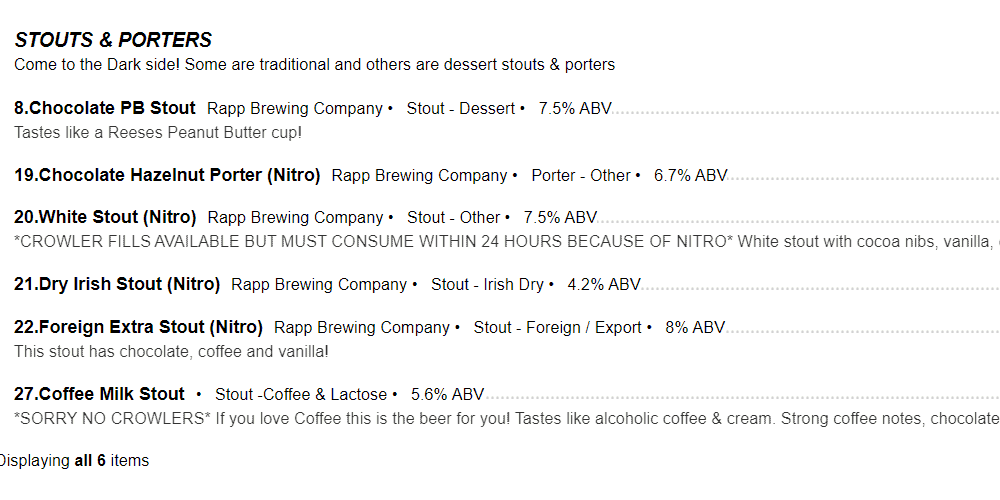 Craft brewers are classified using three key points – small brewery size, traditional brewing techniques, and a TTB permit. And artisanal beer batches are under 6 million barrels per year. Microbreweries are far lower at just 15,000 barrels a year. Rapp categorizes itself as an independent nano-brewery and they have two peanut butter beers in their taprooms.

This Florida brewer makes batched by hand. The Fat Elvis is one of their experimental brews. It’s a Hefeweizen with peanut butter and bacon. Its ABV is 6%. Being a Witbier (or wheat beer), this is a double allergen (gluten and peanuts) so approach it with caution. If you’d prefer a darker peanut butter beer, opt for the 7% Reeses-flavored Chocolate PB Stout. 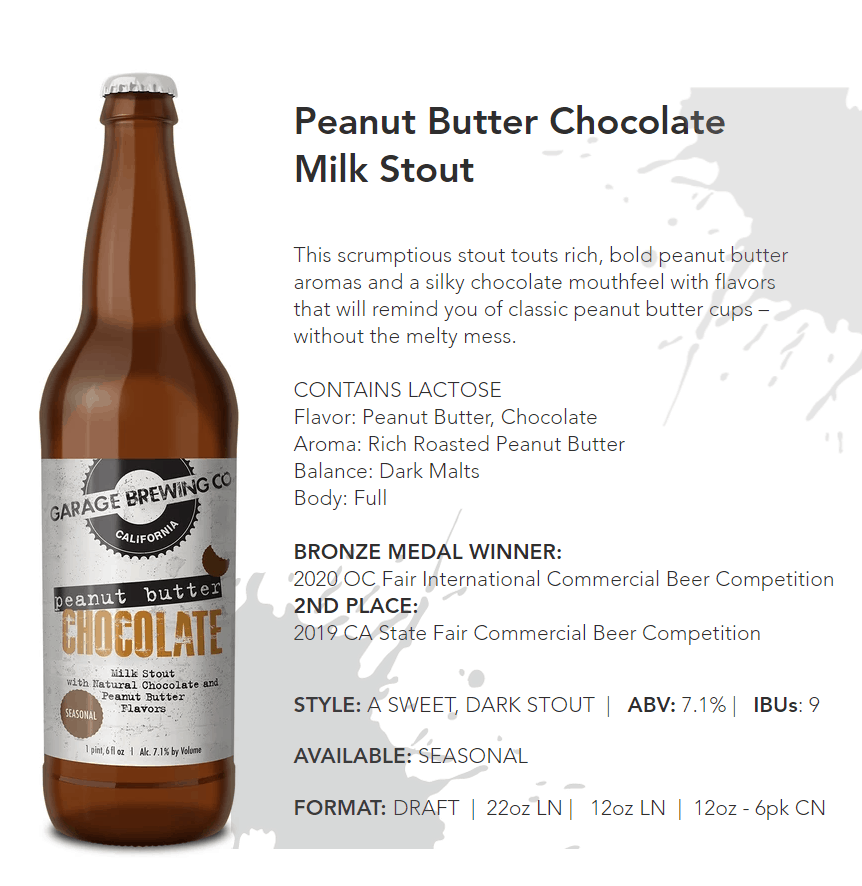 This brewery is housed eponymously in an eight-bay garage. Though they’re still within the small brewing space, the company currently has two sites. The taprooms are deep in the middle of wine country, so their craft brews do have a heavy vino influence. The company loves to play with milk stouts. Flavors include coffee, chocolate, cherry, and marshmallow.

You can order their peanut butter chocolate milk stout in cans or bottles. This full-bodied beer is sweet and dark with an IBU of 7 and an ABV of 7.1%. It’s an award-winning stout that copped 2nd place (silver) in 2019 and 3rd place (bronze) in 2020. The texture is rich, silky chocolate on your tongue with a bold peanut butter aroma. It’s brewed with dark malts. 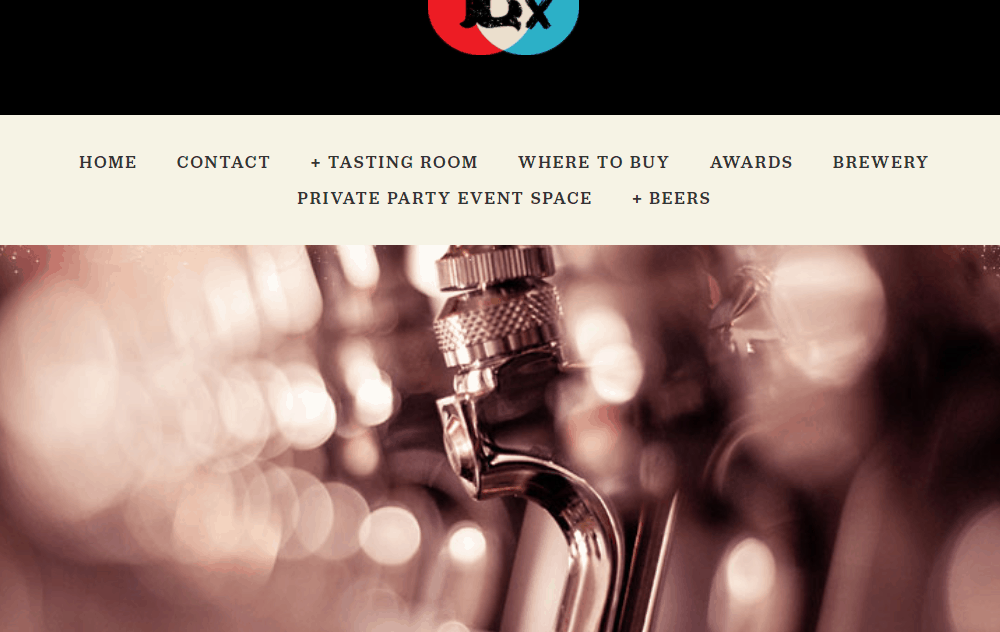 This Colorado company is based in Lafayette and has a suitably artisanal name. Their taproom is open until 9 pm daily and hosts numerous events. The founders were professionals in biotech and pharmacology before they started brewing so their beers are strongly backed by science. They use proprietary brewing equipment from DME.

And while the abbreviation for PBP (Peanut Butter Porter) isn’t quite as familiar as IPA (India Pale Ale), the version brewed by Liquid Mechanics has won several awards including two silvers, two golds, and a bronze between 2016 and 2019. The beer has an ABV of 8.6% with lots of lace and half an inch of weak head. The aroma is smoky and the beer is creamy. 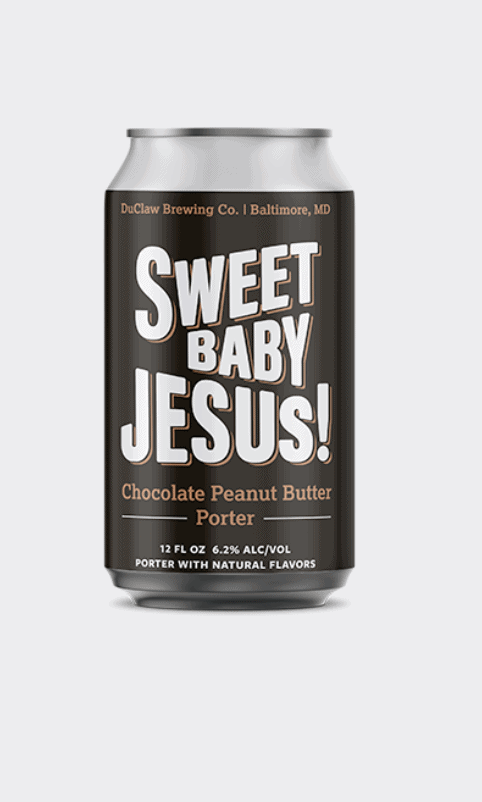 For lots of artisanal brewers, it’s a family business. But craft beer lovers are free spirits who often buck against the establishment. Dave Benfield certainly did when he ejected himself from his family’s electrical contracting business. Instead, he launched DuClaw Brewing and now enjoys a different kind of buzz. His colorful team now has close to thirty members.

A glance at their websites suggests this is a multicultural hub. Meaning they have a wider pool for beer ideas. Their peanut butter porter – Sweet Baby Jesus! – has an ABV of 6.2% and an IBU of 37. And yes, the ! is part of the name. Its plato is 16 and it’s a dry porter with aromatic notes of roasted malt, rich chocolate, and peanut paste, giving it a smooth creamy palate. 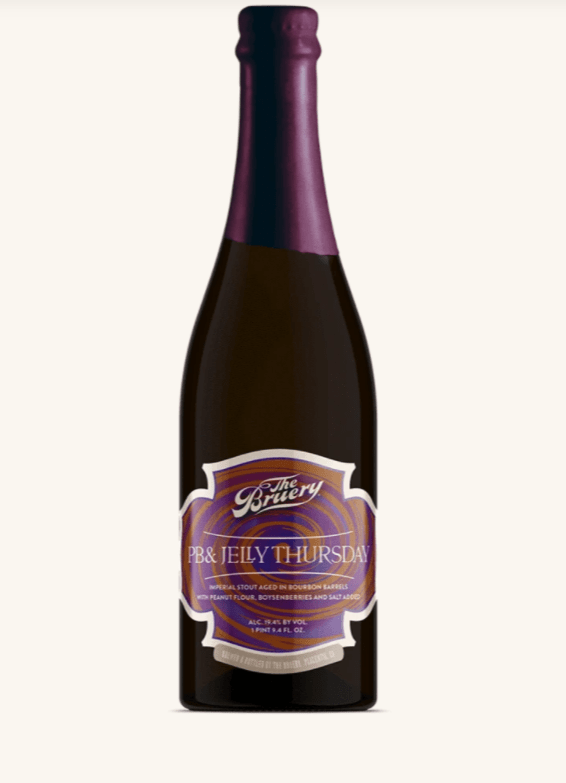 These days, getting the right logo is tough. Registering a business name is even harder – it can feel like every name is taken! But deliberately misspelling a name can get you around that snag. Enter The Bruery. It started with Patrick Rue brewing in his kitchen. He later earned the title of Master Cicerone and some beer awards to boot. So let’s talk nuts…

The two most popular peanut sandwiches are PB&J and PB&B (banana). And the Bruery uses both these formulations. They offer three peanut butter beers – Elvis Mash – which fuses peanut butter, banana, and aged in a bourbon barrel. It’s described as a ‘barley-wine-styled ale’. Then there’s the specialty imperial stout with its boysenberry and fudge notes. 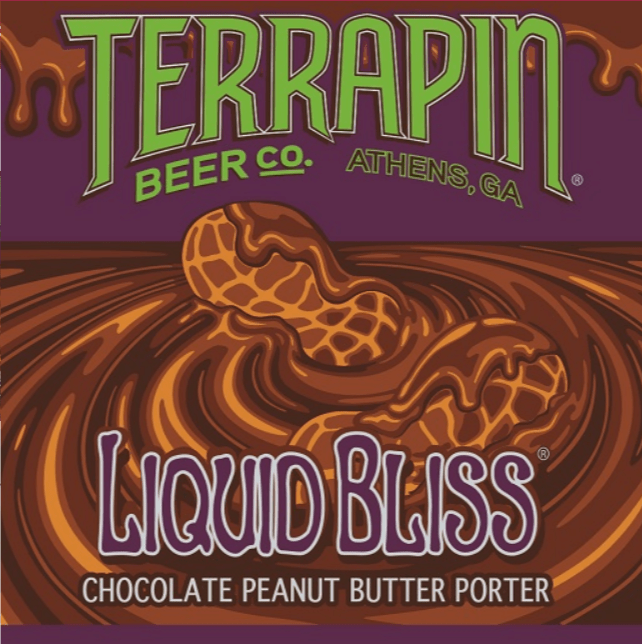 The best peanut butter beer is usually a porter or a stout. Though you can occasionally find a nutty Witbier at the bar. But with Terrapin, peanuts go best with Moo-Hoo, their milkshake stout. This 6.1% porter was brewed with peanut butter powder as a one-time release in 2014. They did a fresh batch in 2019 and might pop up again … if you ask the founders nicely …

The brewery was started by Spike Buckowski and John Cochran, co-workers in the Atlanta beer space. Within 6 months of launching their specialty recipes, the pair bagged a gold medal at GABF.  The Terrapin Tribe is extremely proud of their Terraprint so they’re deeply involved in CSR and green sustainability. So if you’re an eco-warrior, try their tipple. 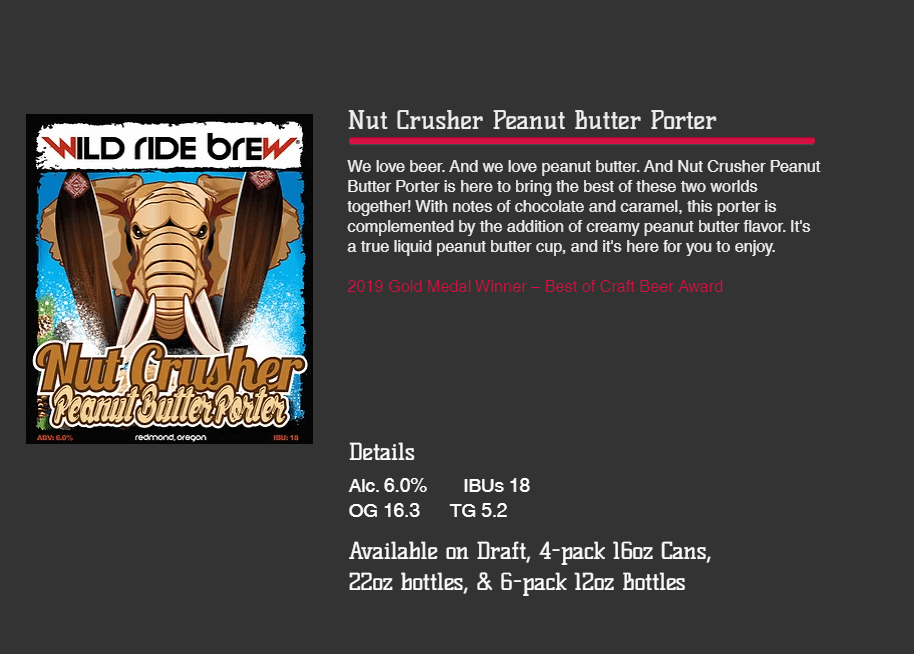 The best part about artisanal beer is ordering one. They have such quirky names – yelling them to the bartender is half the fun! And when it comes to nutty beer, Wild Ride Brewing has two. Usually, peanut butter beer is seasonal. The nuts are available all year round, but craft brewers seem to prefer their peanuts in small batches. Not this brewer though.

You can buy Nut Crusher (their peanut butter porter) 24-7-365. It has an ABV of 6% and an IBU of 18. It’s infused with caramel and chocolate to highlight the rich peanut butter flavor. This beer won a gold medal in 2019 – it’s that good. But if you’d rather try their seasonal nut brew, sip their Mac Daddy Macadamia Nut Brown Ale. Its ABV is 6.06% and its IBU is 20. 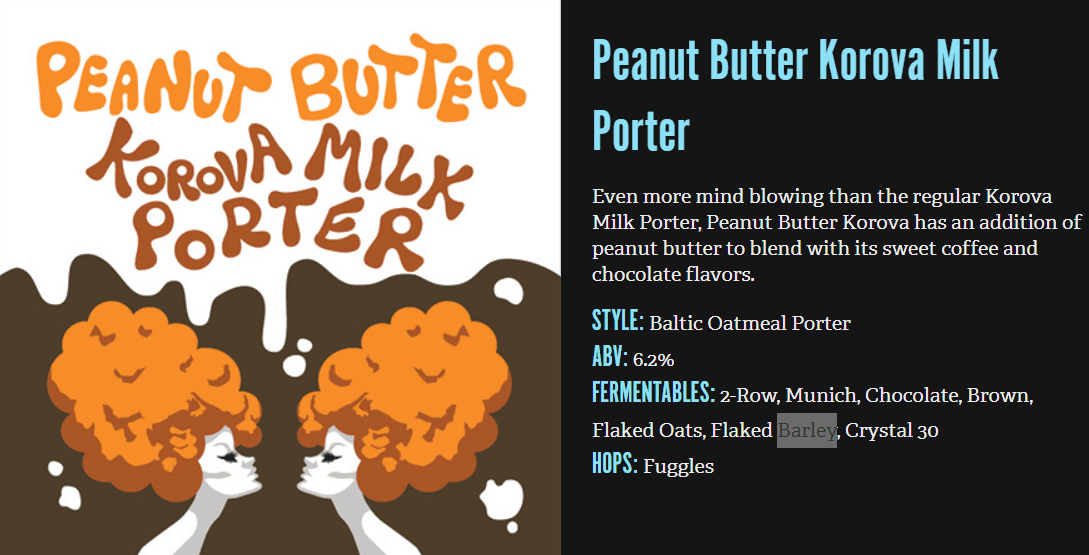 As you hunt down the best peanut butter beers, be careful. It’s generally seen as an experimental, seasonal brew. So some craft breweries release it once then cease production. This includes crowd faves like the honey and marshmallow Nutcase Porter from Listermann. Or Witch’s Hat Peanut Butter Stout. Luckily, Gnarly Barley’s PBK is still in production.

It’s built off the brewery’s Korova Milk Porter with a hefty dose of peanut butter powder. This works wonders with the coffee and chocolate flavors from the original beer. PBK (Peanut Butter Korova) is a Baltic oatmeal milk drink with an ABV of 6%. It uses Fuggles hops and its malts include two-row, brown, Munich, chocolate, crystal 30, and flakes. 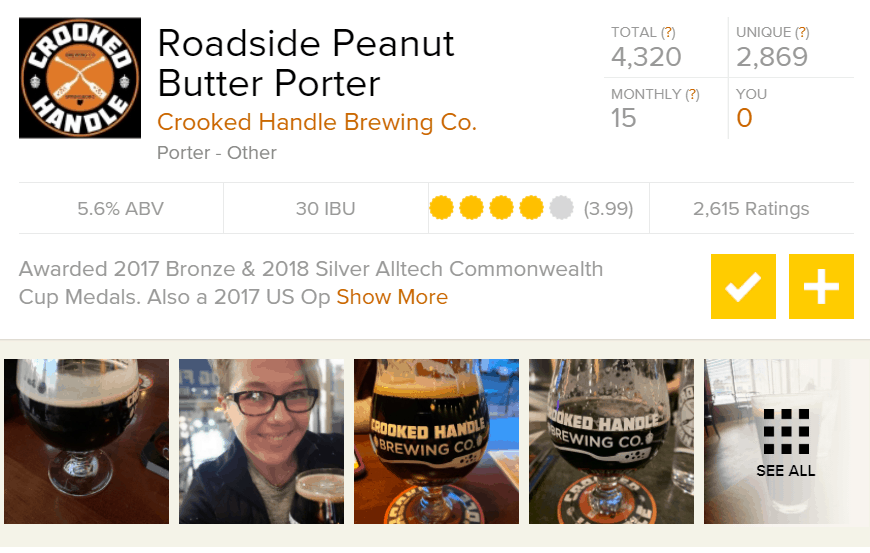 During these pandemic times, lots of brewers are opting for curbside pick-up and beer delivery. So this peanut butter beer is conveniently named. The brewery was started by two couples – the Moores and the Pedros. They spent weekends experimenting in a horse farm garage using unconventional equipment like turkey fryers, kettles, an igloo coolers.

These bottled peanut butter goodies have an ABV of 5.6% and an IBU of 30 so it’s a distinctly sweet beer. It’s a well-balanced beer without much lace or head. But it still feels fizzy on your tongue and light in your tummy. (The brewer has a restaurant too!) The aromatic peanut butter is intoxicating while the silky chocolate adds a sugar high to your boozy buzz. Bliss! 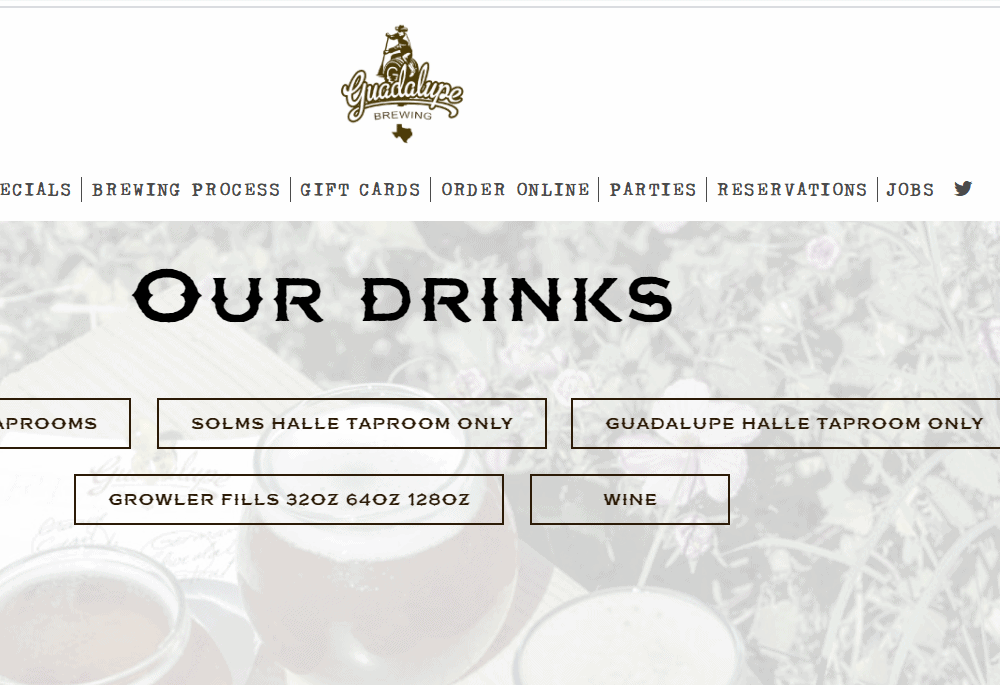 For a peanut butter beer, Guadalupe’s version has a fairly high ABV – 8.8% and an IBU of 20. This Texas brewery aims to make beers that are ‘well-balanced and approachable’. The kind of craft beer anyone can drink, not just the ‘artisanal snobs’. The team was trained at the Siebel Institute before opening their own independent brewing crew in 2012.

They developed a 15-step brewing process with hops as an optional addition between steps 7 (wort) and 8 (copper kettle). Soooo 7.5? And their peanut butter beer is available year-round. And they’re future-friendly too. To avoid environmental waste, they send their used grain to piggeries and dairy farms. And no, it won’t get the animals drunk (or marinade them alive).

15. Absence of Light by 4 Hands Brewing 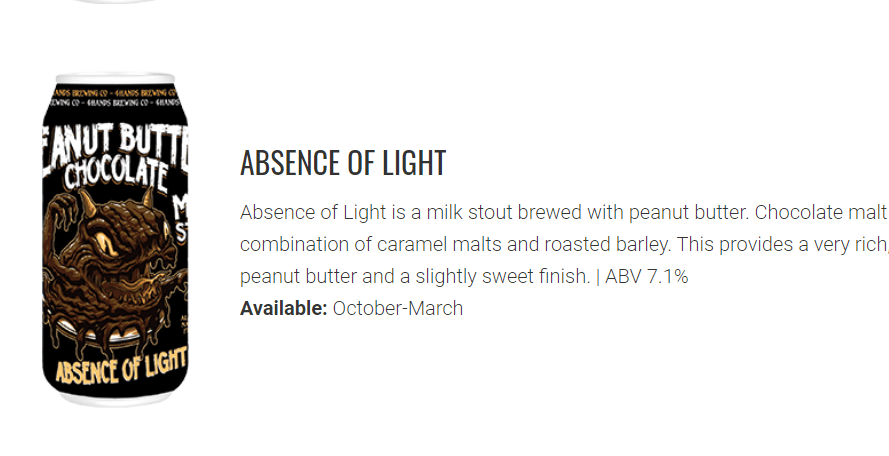 4 Hands Brewing may have started with a pair of brewers. But their current team is much larger than two. They offer seven year-round beers and several seasonal including this peanut butter mil stout. The company has a 30-barrel brewing process and covers 20,000 square feet. Absence of Light is one of the seasonal sips (October to March). Its ABV is 7.1%.

Despite the monster on the can and the darkness in its name, this isn’t a blackout beer. It’s brewed with chocolate malt, roasted barley, and caramel. It has hints of coffee as well. And if you want to go even sweeter, try their Absence of Light PB&J. They’ve added raspberry to the original recipe, sweetening this bottled booze and raising its ABV to 7.5%.

What’s the best peanut butter beer you ever had? Tell us all about it in the comments!