If you’ve ever tried your hand at East Asian cooking, you’ve probably come across terms like rice wine or rice vinegar, but what exactly are they? And what can you use if you don’t have them to hand?

In this post, we have all the answers to questions like these and more as we look at the differences between rice wine, rice wine vinegar and rice vinegar.

So let’s do the easy part first and start with the short answer.

The first of these, rice wine, is a type of alcoholic drink that is produced by fermenting rice, and it may be consumed as a beverage or used in cooking.

If you think about it, this is similar to regular grape wine, which is made for drinking but is also often used in cooking.

Rice wine vinegar and rice vinegar, on the other hand, are two terms for the same thing – they both refer to a type of vinegar that is produced by fermenting rice.

For the rest of this post, we will stick to the term “rice vinegar” – but bear in mind that there is no difference between this and “rice wine vinegar”.

If you find all this confusing, the easiest way to remember it is that if it has “vinegar” in the name, it’s vinegar.

Rice vinegar contains no alcohol, and just like any other type of vinegar, it can be used in cooking or as a condiment. However, you can’t drink it – any more than you can drink vinegar made from grapes, cider or malt. 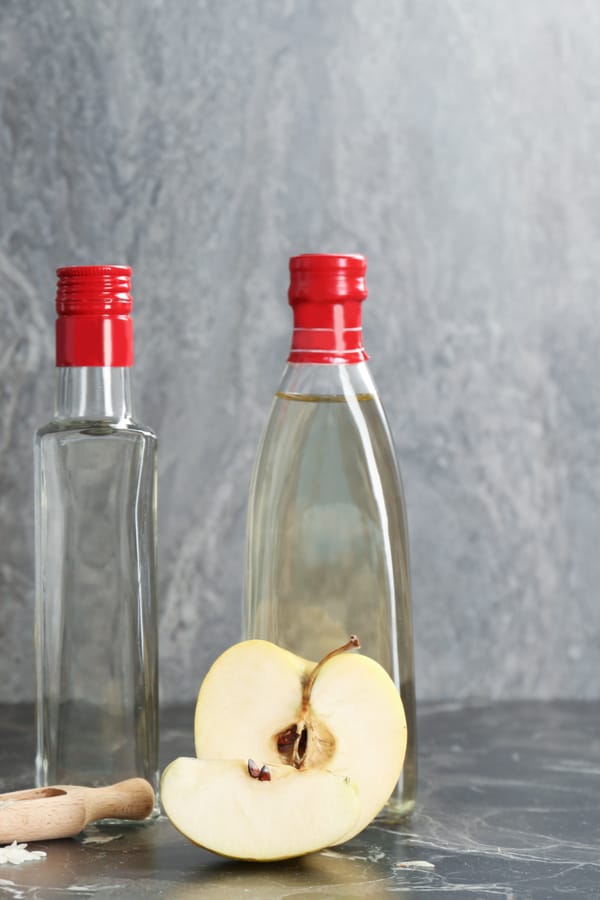 Rice wine and rice vinegar are both used extensively in East Asian cooking, especially in China, Japan, Korea and Vietnam.

If you are cooking a dish and the recipe calls for one of these ingredients, you might be wondering if you can swap it for the other – and the answer is, quite simply, absolutely not.

If you were cooking something that called for red wine, you wouldn’t consider swapping it for vinegar, and similarly, if a dish requires vinegar, you wouldn’t dream of pouring in red wine instead.

This is because they are two completely different ingredients. Both have specific properties, and both have very different effects on the final dish.

The same is true of rice wine and rice vinegar – so if your recipe calls for one, it shouldn’t even cross your mind to substitute it for the other.

In fact, as we will see in a moment, there are lots of different varieties of both rice wine and rice vinegar, and if a recipe calls for one type, ideally, you shouldn’t even substitute it for another type.

But before we get to this let’s have a look in a bit more detail at what rice wine and rice vinegar are.

What is rice wine?

Rice wine is a broad term covering a whole range of alcoholic drinks made by fermenting rice. Various types of rice wine are found just about anywhere rice is grown, especially in East Asia, Southeast Asia and South Asia.

Rice wine is sometimes made for drinking and sometimes specifically for cooking – and some varieties are suitable for both uses.

If you are cooking a dish that requires a rice wine, the recipe will usually specify which type you should use – in which case, you should try to find that type.

For example, if you are cooking a Chinese dish, it wouldn’t usually be suitable to substitute it for a Japanese rice wine since they are quite different.

Now let’s have a look in some more detail at some of the different types of rice wines that exist by country – although this list is far from exhaustive.

In China, possibly the most common type of rice wine is what’s known as 黄酒 huángjiŭ, which translates literally as “yellow alcohol”. In China, there are many types of huangjiu, and they are used for both cooking and drinking. The alcohol content is usually about 8-20% ABV.

Often, cookery books in the West will tell you to use Shaoxing wine, but it isn’t necessary to find this particular type. Your local Asian supermarket or grocery store may stock some form of liaojiu, which you can use instead of Shaoxing wine.

Among the best-known types of rice alcohol in the West is Japanese sake, an alcohol primarily made for drinking.

The word sake in Japanese simply means “alcohol”, and what we usually refer to as “sake” in English is called “nihonshu” (日本酒) in Japan, which can be translated as “Japanese alcohol drink”.

In Japan, it is considered the national beverage, and it is usually served gently warmed – although it can be served at room temperature or chilled, according to personal preference. The alcohol content is usually around 18-20% ABV.

Another kind of Japanese rice wine is called mirin. It is usually lower in alcohol than sake and has a higher sugar content. This type of rice wine is usually used for cooking and not drinking.

Mirin is often incorporated in other sauces, especially fish-based sauces since it helps reduce the fishy smell. It is also used when cooking certain fish dishes for the same reason.

Korea has a large number of alcoholic beverages, many of which are made from rice.

Cheongju is a type of clear rice wine commonly drunk in Korea that is broadly analogous to sake in Japan. It is usually around 14% ABV.

This is contrasted with makgeolli, a highly popular type of milky rice wine with an alcohol content of around 6-7% ABV.

Another extremely popular and well-known Korean drink is soju. Soju can be made with rice but is usually made with other ingredients such as barley or wheat.

A type of moonshine made from rice in Laos is known as lao-Lao.

Although the two words look the same in English, in the Lao language, the pronunciation is different – the first means “alcohol” while the second means “Lao”, so the translation is “Lao alcohol”. It is invariably highly potent.

In the northeastern Thai region of Isaan, a type of alcohol called sato is made from glutinous rice. It is similar to lao-Lao, and it is now becoming more popular throughout the rest of the country. 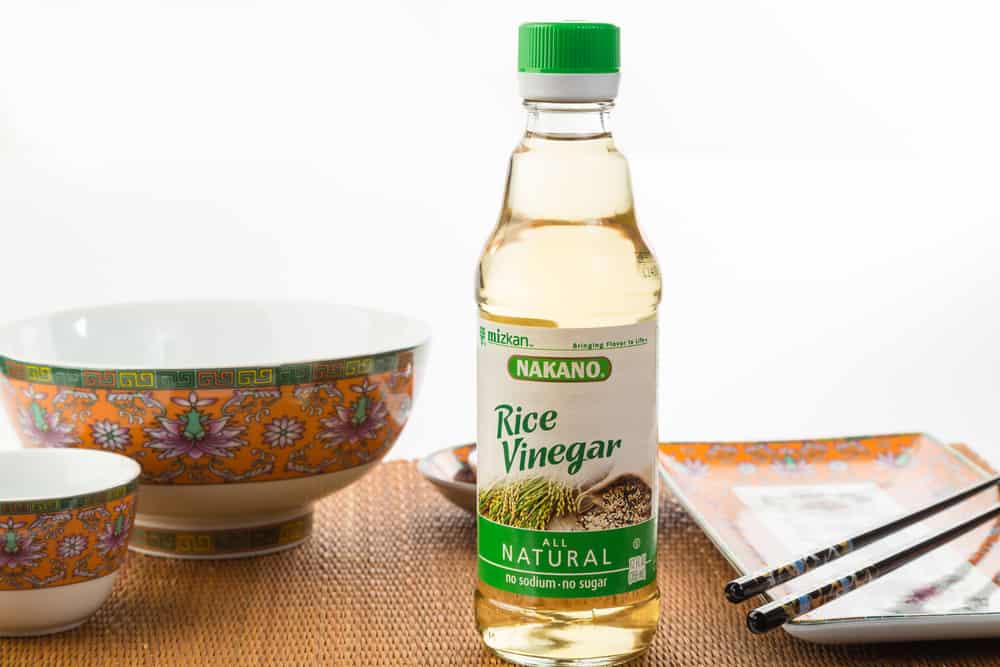 Like rice wine, rice vinegar is also made by fermenting rice. However, rather than alcohol, the process produces acetic acid – and no alcohol is present in the finished product.

Although rice vinegar varies from country to country – and as we will see in just a moment, some countries produce several vastly different types – it is usually milder than Western vinegars.

This means it is a useful ingredient for when you want to create a tart flavor but don’t want the vinegar to overpower or dominate the dish. For this reason, it can also be a good choice when making vinaigrettes.

Now let’s look at the different types of rice vinegar by country.

China makes a range of different rice vinegars, and they are a key ingredient in many Chinese dishes.

White rice vinegar is a clear liquid with a strong acidic taste and smell – although it still isn’t as strong as most Western vinegars. It can be added to dishes to give them a sharp acidic tang, and it is used to create the sour element in sweet and sour dishes.

Another type of Chinese vinegar is black vinegar, which, as the name suggests, is very dark in color. It is usually made from black glutinous rice and is used both in cooking and as a dipping sauce.

One of the most famous is Zhenjiang vinegar from the city of Zhenjiang in Jiangsu province.

It is commonly found in Chinese supermarkets and grocery stores in the West, and the bottle is labelled Chinkiang vinegar, an alternative spelling of Zhenjiang according to a different system of transliteration.

A third type of Chinese vinegar is red rice vinegar, which is made from red yeast rice.

If you are cooking Chinese food by following a recipe, check which of these three types of vinegar is called for since they are all quite different and not interchangeable.

Japanese rice vinegar is milder than the Chinese version, and two main types exist. The first, known as yonezu, is made from rice, and the second, kasezu, is made from sake lees, the residual yeast created during sake production.

Seasoned vinegar is vinegar with added salt, sugar and sake that is used to make sushi. It can either be bought ready-made or prepared at home. In fact, although there are many types of sushi, vinegared rice is considered the one key ingredient common to them all.

Korean cuisine makes use of rice vinegar, and the country produces several types from white, brown and glutinous rice.

In Vietnam, several types of rice vinegar are produced for cooking and for use as condiments.

In Thailand, rice vinegar is not as ubiquitous in cooking as it is in some of the cuisines of the neighboring countries, although Chinese-style white rice vinegar is used in some dishes.

However, if you visit any noodle shop in the country, you will find a tray of four condiments on the table to add to your food, one of which is usually white rice vinegar with chopped pieces of chili inside.

Which ingredients can you use as substitutes? 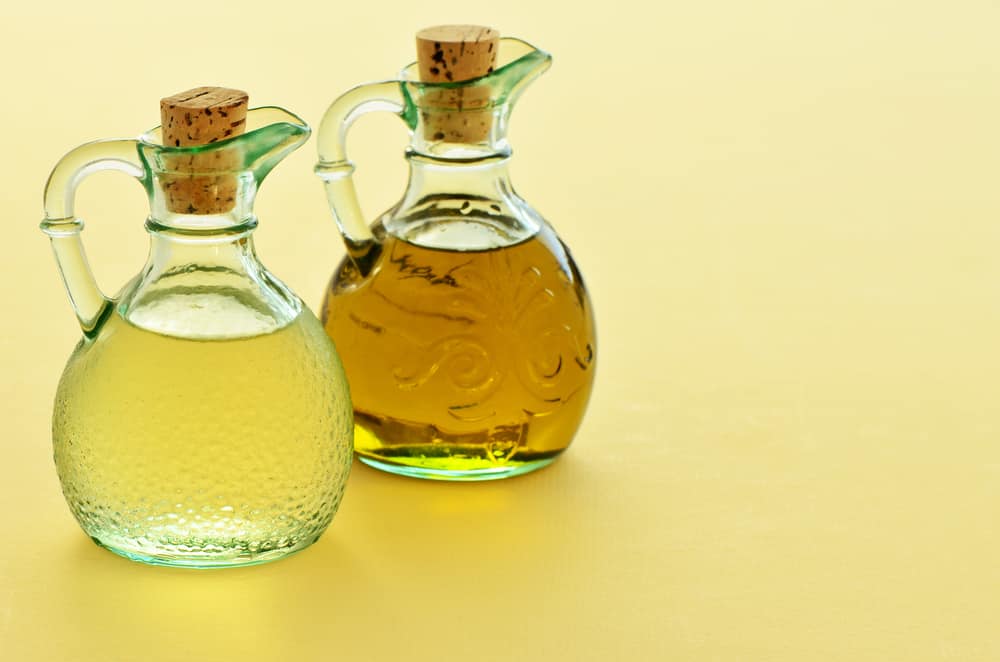 Generally speaking, if you want the most authentic-tasting dishes, the secret is going the extra mile and sourcing the specific ingredients required.

This means if you want your Chinese or Japanese cooking to taste like the real thing, there’s really no substitute for finding the ingredients the recipe calls for.

Having said that, it might not always be possible to find the specific ingredient required, and sometimes, you might need to use something else in a pinch because you didn’t realize you were lacking a certain ingredient – so here are a few suggestions to help.

If a recipe requires rice wine, the best substitute is dry sherry. The flavor isn’t quite the same, but it will give you acceptable results if you don’t have the real thing. If you don’t have sherry, you can use dry white wine – but this should be considered a last resort.

In terms of vinegar, Chinese white vinegar is relatively easy to find and can be used to replace many of the other types of rice vinegar used in the cuisines of other Asian countries.

Bear in mind that it can be stronger than Japanese rice vinegar, so use it sparingly.

Failing that, you can use apple cider vinegar or sherry vinegar – substituting at a 1:1 ratio or slightly less will give you reasonably good results. You may want to add a little sugar to give it a bit of extra sweetness.

However, again, remember that these are only stand-ins – and the best thing you can do is make sure you have the correct ingredients before you begin.

So as we have seen, rice wine and rice wine vinegar are two very different things, although they both come from rice.

If you need one or the other for a recipe, for the best results, try to find the exact ingredient required – or failing that, try one of the suggested substitutes above.

However, the one thing you should never do is substitute rice wine for rice vinegar or vice versa – because this is a sure way to mess up whatever it is you’re cooking. 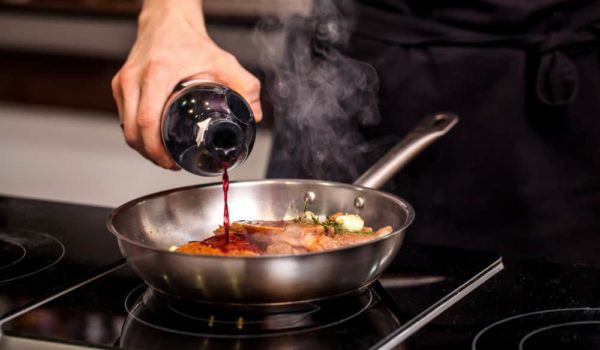