People are strange, as the song goes. Some put their tea bag in cold milk before adding hot water. Some put the jam on their scone before the cream. And some – believe it or not – put salt in their beer.

What beliefs drive them to this weirder than weird practice? We’re here to find out! We’re going to go deep into the murky world of salty beer drinkers to discover just what they’re thinking.

So if you’ve ever wondered, “Why do people put salt in their beer?” – buckle up! We’re in for a crazy ride.

Some brewers actually add salt as part of the beer making process. The idea is usually that it rounds out the flavor, rather than actually tasting salty.

Other options are less reminiscent of dessert. Monkey Paw by brewers San Diego is an IPA that includes Himalayan pink salt. It has coconut too, and is designed to be drunk as an accompaniment to Thai food.

And North Carolina brewers Fonta Flora use salt in a range of their beers, alongside eclectic ingredients like oyster shells, sunflower seeds and lime.

In the case of Gose beer, made in the Goslar region of Germany, however, the taste is deliberately salty. Its distinctive salt, lemon and herbal flavor has been enjoyed since it was first brewed way back in the thirteenth century.

All this means there’s a strong history of salt in particular kinds of beer. That, however, is quite different from adding salt to your standard pint. So what’s that all about?

It’s possible that some people hope that by adding salt to their beer they’re preventing the after-effects of over-indulging. After all, drinking too much alcohol dehydrates the body and reduces your sodium levels. Could topping up with sodium chloride whilst drinking lessen the effects?

There are different takes on this.

Some people say that adding salt to your beer lessens the risk of dehydration. They point to examples of people working in very hot climates, who often take salt tablets.

In high temperatures, where people are losing moisture and sodium as they sweat, replacing it in this way makes sense. If levels of sodium dip too low, you can experience cramps and other unpleasant symptoms.

But there’s a counter-argument to this …

Does it get you drunk quicker? 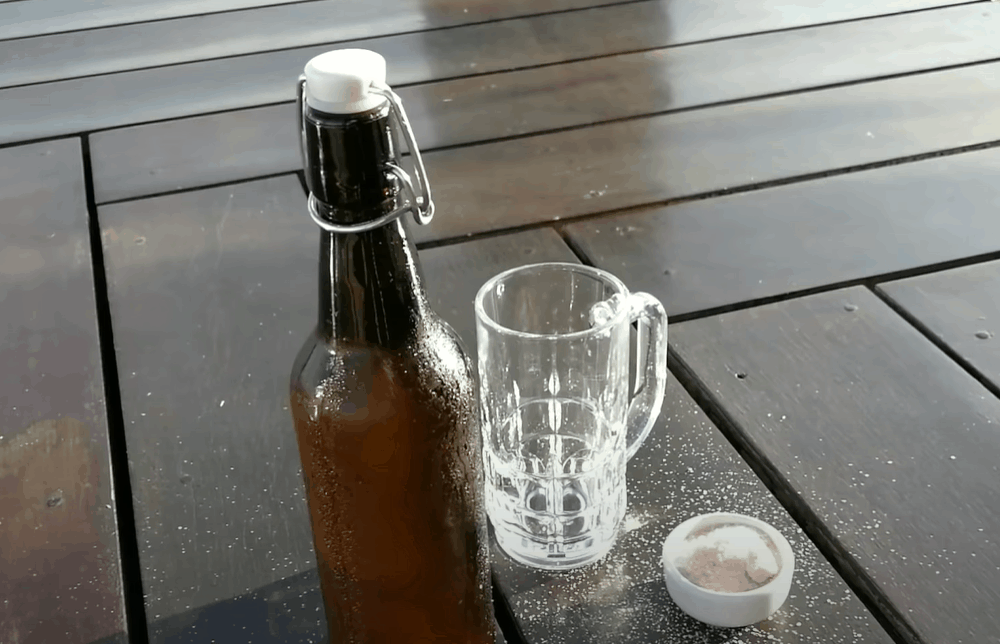 Larger amounts of sodium can mean that your body absorbs alcohol more quickly. That’s because it enlarges the opening at the bottom of your tum – your duodenal sphincter. As a result, more alcohol passes more quickly into the small intestine, where it is absorbed into your blood.

For that reason, some people advise steering clear of alcoholic drinks with a high salt content. On this reading, you might get drunk quicker. But you might get a worse hangover too.

Unfortunately, we haven’t been able to find any information on how much sodium you’d have to ingest for this to happen. Would a sprinkle of salt in your beer make a difference? It’s tough to say one way or the other.

More bubbles in your beer

One thing salt definitely does do is add bubbles to your beer. If you want a large foamy head on your beverage, a pinch of salt will do the trick.

Those bubbles will, though, disappear fairly quickly. And they won’t make your beer taste any fizzier. In fact, it’s likely to taste rather flat. That’s because the salt reacts with the carbon dioxide in the liquid itself, bringing the bubbles to the top.

If you want a more robust head, the better option is to choose a beer that naturally has this characteristic. High malts will do so, without any need to add salt. And you won’t end up with a flat drink.

Another explanation for adding salt to your beer is related to the bubble phenomenon. The idea is that by taking the gas from the beer and releasing it as foam, you’ll consume less gas. And that will mean you produce less gas afterwards too, if you get our meaning!

It makes a certain amount of sense – as long as you don’t mind drinking flat beer. But there are better ways to reduce the gaseous after-effects of your beverage.

The most effective is to make sure your glass is squeaky clean and chilled before you pour in your beer. Tipping the glass at a 45-degree angle as you pour will help too. As the beer hits the side of the glass, some of the carbon dioxides will be forced out. And that means it will never reach your stomach.

This pouring technique will also produce a good head. That in turn will trap the aroma of your beer and improve the drinking experience.

It allows you to drink more

Some people claim that salting their beer allows them to drink more. If your aim is to drink as much alcohol as possible – we’re not judging (much) – this could be appealing. But does it work?

Well, maybe. But if your sole purpose is to drink more alcohol without worrying about the flavor, why not just switch drinks? Hard liquor has a much higher alcohol content than beer. And you can taste it as the distiller intended, without having to mess around with salt. 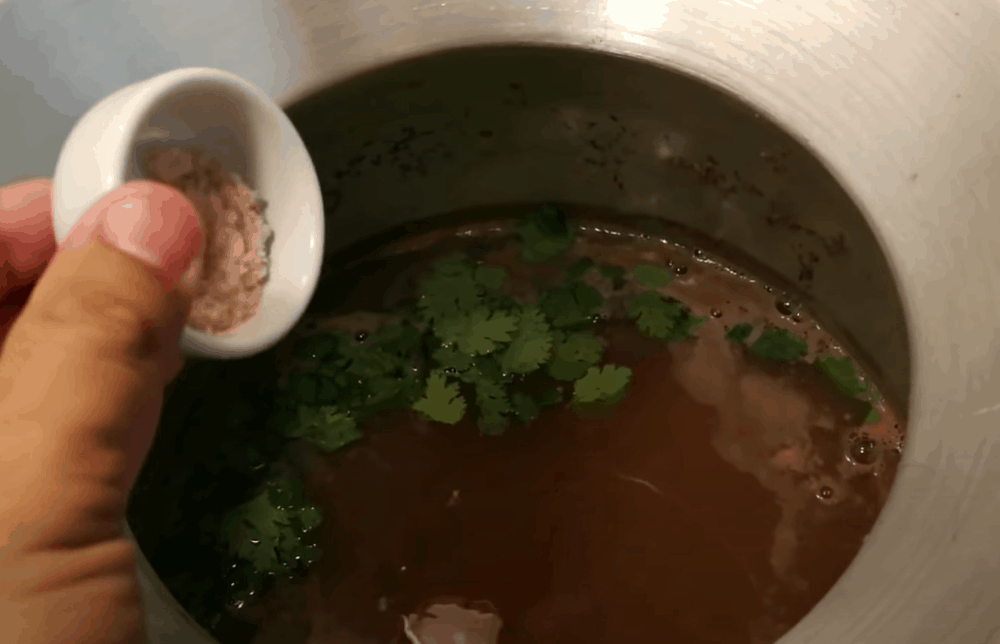 Ask some people why they add salt to their beer, and you’ll get an answer along the lines of, “My grandfather did it.”

The reasons Grandpa added that salt are usually lost in the mists of time. But familial affection still has those people adding a pinch of salt to their glass!

Of course, Grandpa probably did have his reasons. Back in the day, it’s possible that it was an easy way of dealing with beer that lacked flavor. Some people also claim that it creates a better mouthfeel.

Until licensing laws changed, salt was routinely added to beer by brewers. As with serving salty foods in pubs, the sodium made drinkers thirsty. That meant they drank more beer, increasing the brewers’ profits.

It’s possible that those who had got used to drinking salty beer missed the flavor when brewing processes changed. Adding salt may have been a quick fix.

To win a bet

We’ve heard some beer salters talk about the way that their ritual provides a bit of theatre. And it can spark conversation with other people. (We imagine the conversation starts, “What the heck are you doing?”)

But perhaps the best reason we’ve heard for adding salt to your beer is to win a bet. Here’s how it works.

You start by salting your beer. As you do so, casually spill a few grains of salt on the bar near your glass. You then challenge your friends or other bargoers to balance your glass on the edge of the bar. However careful they are, they will invariably find the glass topples into their hands.

You then take back your glass, and carefully slide it to the edge of the bar. As you’re doing so, you’re collecting some of the grains of salt you spilled earlier on the base of the glass. Believe it or not, a few grains is all it takes for your glass to stay gripped to the bar.

It’s a similar principle to salting sidewalks before a heavy snow. Salt is very good at preventing slippage.

Bask in the awe of onlookers, claim your winnings, and buy another beer! 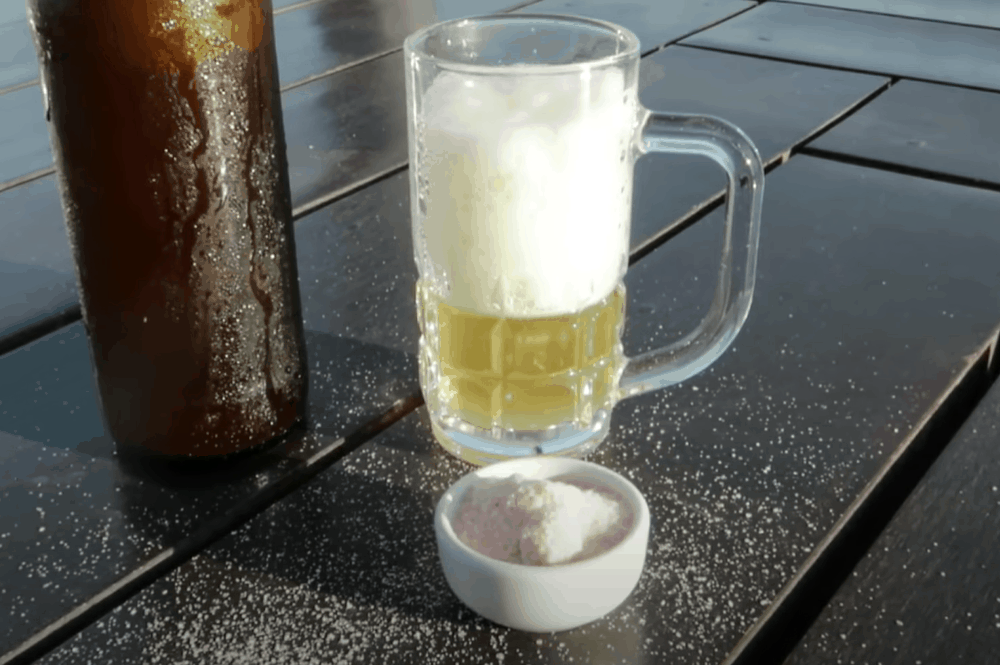 When it comes to adding salt to beer, not all salts are created equal.

The one indisputable effect of salting is that it will affect the flavor of your beverage. And in fact, you can buy salts that are specially designed to add flavor to lackluster beer.

Some beer salts are just coarse salts. But others have different ingredients added to create a particular flavor profile. Lemon and lime are popular options, imbuing the beer with a tangy sourness.

It’s a similar idea to adding a lemon or lime slice to a glass of beer. In many parts of the US, if you order a Mexican beer, you’ll get a fruit slice as a matter of course.

So should you add salt to your beer?

We hope you’ve enjoyed our review of the many and varied reasons people give for salting their beer. And we hope it’s convinced you that, no matter the objective, there are better routes to achieving it!

If you’re drinking decent beer, there’s no need to interfere with the flavor. If you want a bigger head, try higher malts. And if you’re worried about gas, adjust your pouring technique.

The one exception comes with the old “balancing the beer glass with the aid of salt” routine. It’s a fun party trick. Just make sure you win enough to buy yourself another beer – and don’t add salt to that one!

2 thoughts on “Why Do People Put Salt in their Beer?”