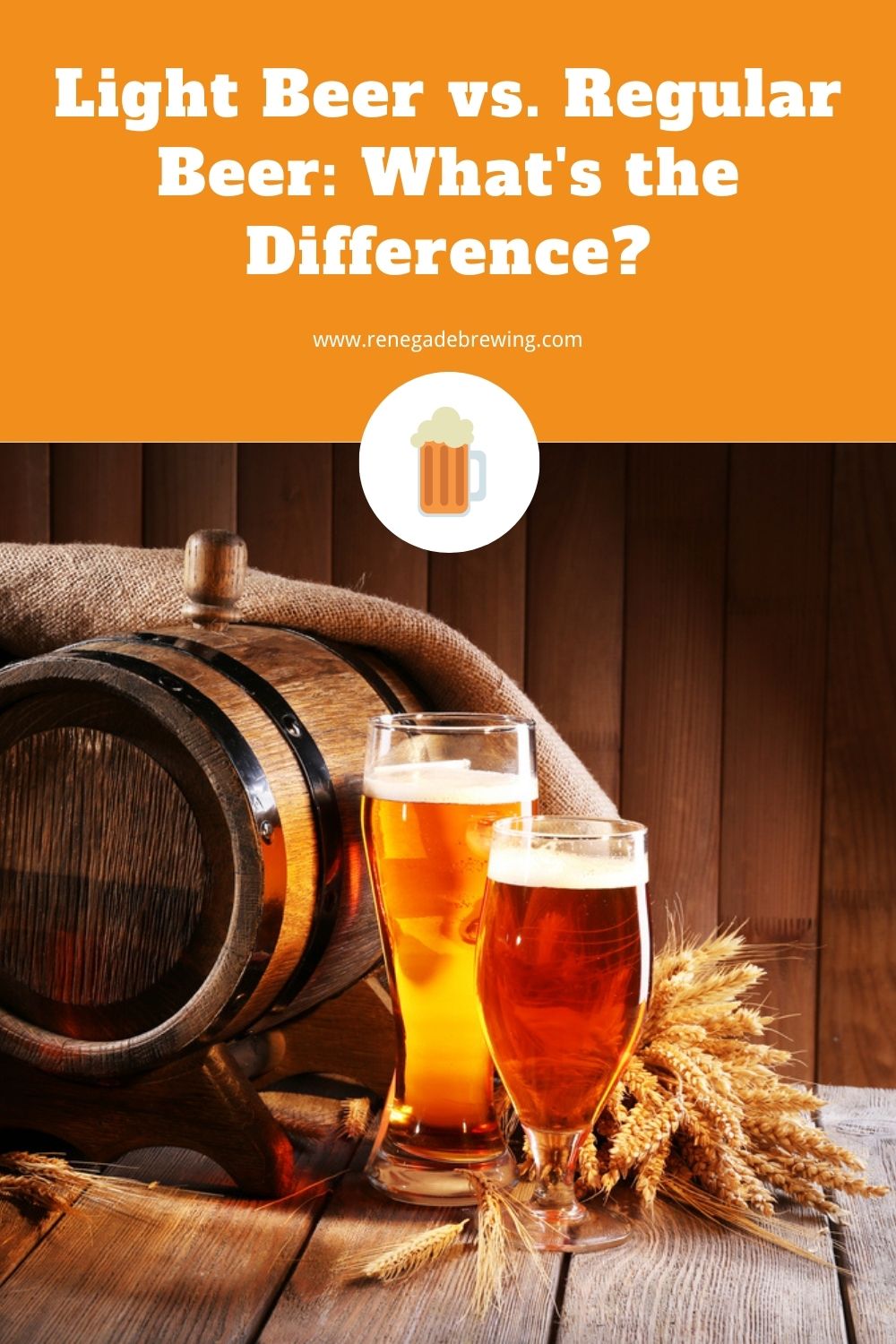 Despite the healthy lifestyle trend taking over the Western world by storm, beer consumption is still as popular as ever. Unsurprisingly, a beer that claims to be ‘healthier’ will attract the attention of the wellness-conscious consumer.

Light beer is the fastest-selling category of booze in the United States but just what is considered a light beer? How is it different from regular beer? These are all fantastic questions and we answer them in this article. Read on to find out!

What makes for a light beer?

Light beer is any style of beer that is low in calories and sometimes low in alcohol. A common misconception is that beers that are categorized as light are non-alcoholic, flavorless, bodiless, fizzy, or lacking aromatic and mouthful complexity. This could not be further from the truth.

Light beers can be as flavorful, crispy, or creamy, and as bodied as a regular beer. The ‘light’ in these brands simply refers to the low number of calories in a bottle or can of beer.

Any beer style whether it is a lager, ale, pale ale, or Indian Pale Ale (IPA) can be a light beer as long as it is lower in caloric content than its regular version.

According to some brewers, making beer with reduced calories is more involving and demanding than brewing ordinary beer. Wondering how light beer is made? Brewers use one of these four methods:

Extending the mashing process allows more of the carbohydrates in the grains to breakdown into simple sugars. The fewer carbohydrates there are, the lower the number of calories in the beer. The resulting beer is then diluted with water, resulting in a light beer.

What is the difference between a light beer and a regular beer?

So, what makes light beer different from regular beer? When talking about light beers, a question that often comes up is: ‘light beers are lower in caloric content than what?’

The answer to that question is that light beers have fewer calories than their regular counterparts do. And therein lies the major difference between light beer and regular beer.

While some regular beers have as many as 150 calories, some light beers also contain 150 calories that would still be categorized as low caloric in relation to their regular beer version.

Another difference between light beer and regular beer is the alcohol by volume (ABV). Generally, a reduction in calories also means a reduction in the alcohol content. Many, although not all, light beers have a significantly low alcohol content with some going as low as 2.3% ABV. Compare this with most regular beers, which fall in the range of 4.1%-5% ABV and you can see that there is a world of a difference between regular beers and their lighter counterparts.

Now that you know what light beer is, let’s take a look at the interesting history of this category of beer.

American macro breweries began producing low-calorie alcohol as far back as the 1940s. Coors Brewing Company was the first to introduce a light lager to the mass market with its Coors Light. The production of Coors Light was paused at the start of World War II but the beer was re-introduced in 1978.

Meanwhile, other breweries followed suit including the Rheingold Brewery which produced the Gablinger’s Diet Beer in 1967 as more and more consumers became health conscious.

Another brewery, Meister Brau, launched their lite beer aptly name Meister Brau Lite. Later, in 1973, the Miller Brewery acquired Meister Brau and rebranded the Meister Brau Lite beer into what is today known as Miller Lite. With its appealing slogan, ‘Tastes great, less filling,’ Miller Lite was officially the first light beer that was available all over the US.

Coors Brewing Company, which had long stopped producing light beers reinvented itself and launched Coors Light in 197 and Budweiser Light in 1982  in response to Miller Brewery’s Miller Lite. Bud Light went on to become the biggest light beer brand in America in terms of sales volume.

To the common beer drinker, all the three brands of American lite seem similar but there are subtle differences. Each is made using a unique yeast strain and brewing technique and will have its own distinct aroma and flavor profile.

Another term that gets thrown around a lot is low-carb beer. Low-carb beer is a lighter variety of light beer that rose to popularity in the 1990s on the back of the low-carb diet fad in the US.

At its inception, low-carb beer was made by adding exogenous enzymes to the mash to break down all the carbohydrates and convert them into simple sugars that are then fermented into alcohol. The alcohol is diluted with water resulting in extremely light booze with tiny caloric content.

A few years later as the low-carb diet fad waned so did the popularity of the low-carb beer. Today, only a few regions in the US sell so-called low-carb alcohol.

Light beer is marketed as a healthier alternative to regular high-calorie, high-ABV beer. But is light beer better for your health? Just like wine, beer is said to have several health benefits.

To be sure, the reduction in the number of calories and carbohydrates in light beers is a bonus but on the downside, light beer consumers tend to drink more than those who consume regular beer. Given the relatively low alcohol content, you would have to drink more of the light beer to get the much-sought-after buzz.

It is also important to keep in mind that there is no standard for what constitutes high or low calories in a beer. What seems like a low caloric level in one brand of beer might be higher for another brand depending on the number of calories in the regular beer.

All in all, even though light beer is low in calories it is not necessarily healthier. In fact, some studies have found that regular dark ale beers and good old lagers contain more antioxidants and iron than light beer.

Low-calorie beer has come a long way and has firmly established itself in the top five most popular categories of beer in the US. From the use of water to dilute beer to the application of exogenous yeasts, brewers use a variety of methods to come up with the perfect lite beer.

Compared to its regular counterpart, light beer allows you the pleasure of enjoying a delicious alcoholic beverage while keeping your health goals in check.

Whether you are looking to drink less alcohol per bottle or you are keen on keeping the calories low, light beer is the giver that keeps giving. 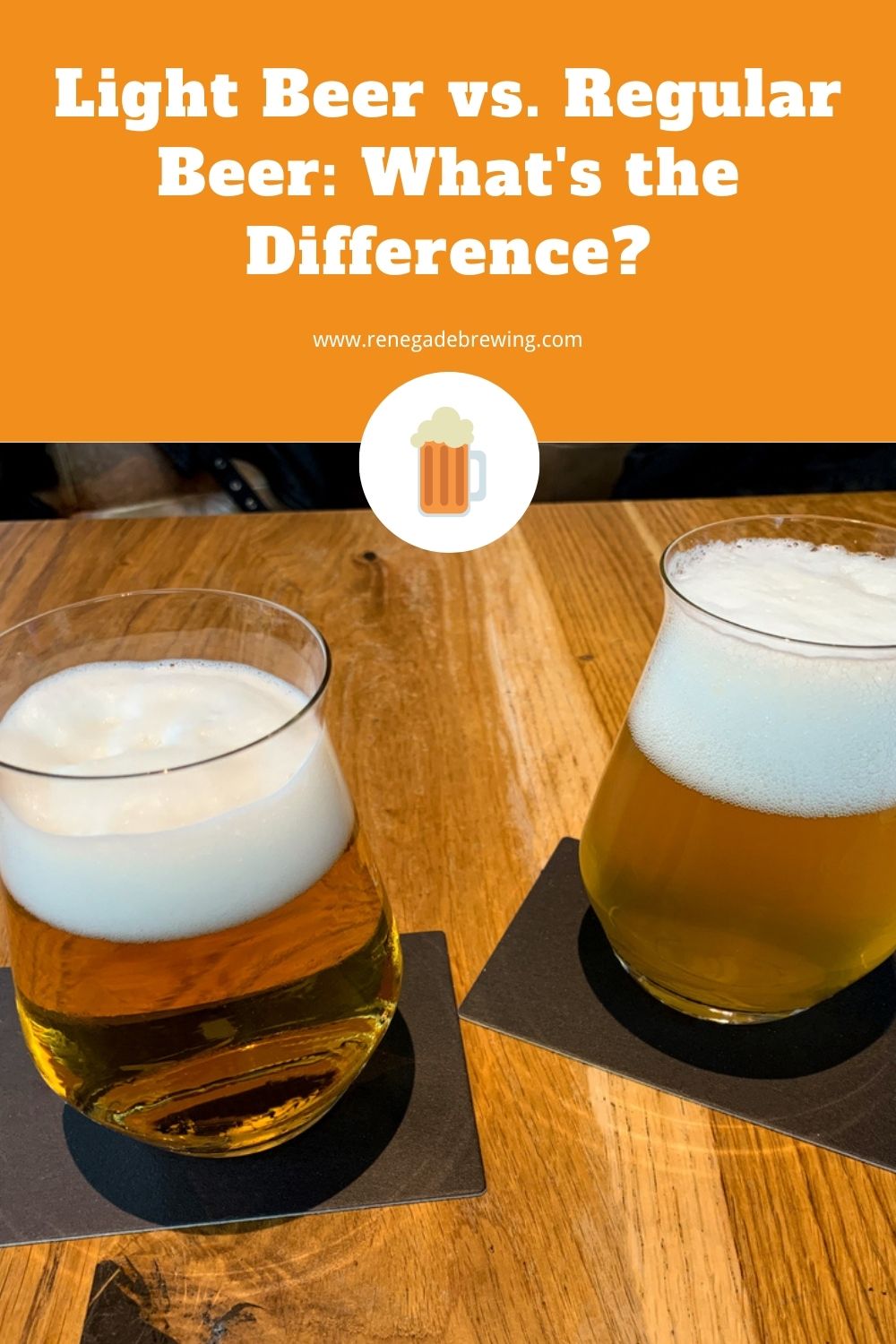 1 thought on “Light Beer vs. Regular Beer: What’s the Difference?”