For many people, their first taste of beer isn’t a particularly pleasant experience. But it’s one of the most popular alcoholic drinks in the world. So why do people like beer? 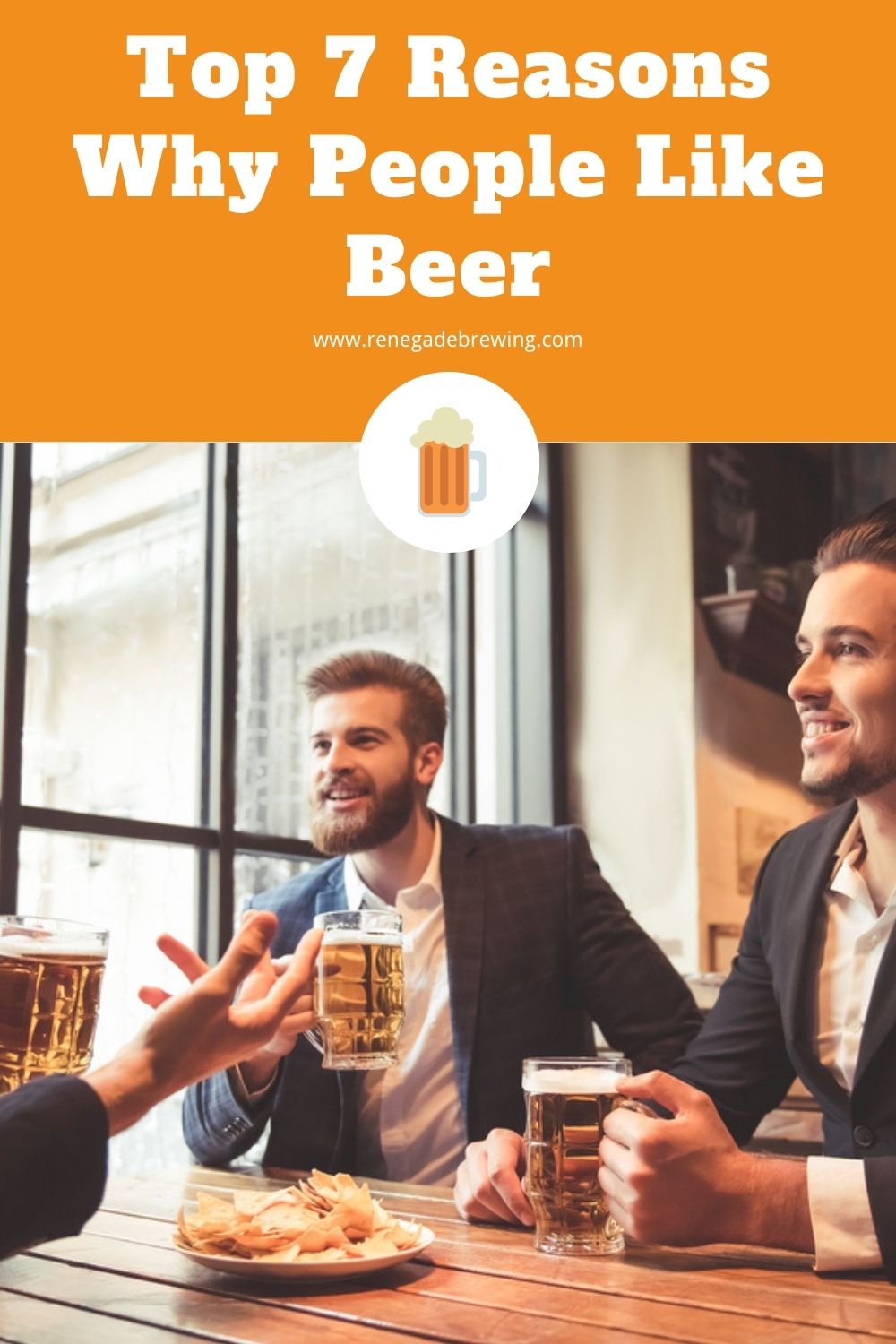 We’re going to investigate everything from that first experience to the different flavors of this infinitely varied beverage. And we’ll look at why some people grow to love their beer – and others don’t like it at all.

So come with us to find out more!

Ask people about the first time they tasted beer, and many will admit they didn’t enjoy it. To find out why, we need to look at how our taste buds respond to different flavors.

Flavors can be categorized into five different groups – sweet, sour, salty, savory (also known as umami), and bitter. Beer, along with another favorite drink, coffee, sits squarely in that final group.

The cells in your taste buds are programmed to respond to these different types of flavors. They send back messages to your brain stem via your nerves, telling it what you’re consuming.

Bitter flavors are like a big red flag to your brain, which associates them with poisons. Most substances that are toxic to us taste bitter. There’s even a name for the way we react – the “bitter rejection response”.

So if the beer tastes bitter, and our bodies think that means it’s trying to kill us, how on earth did it come to be so popular?

In beer, the bitterness comes from hops. These contain alpha and beta acids, and it also contains small amounts of ethanol. These substances bind to three taste receptors, signaling that you’re drinking something very bitter.

But because there are so many bitter taste receptors, there’s lots of room for genetic variation. So just as they affect your eye or hair color, your genes can determine how strongly your taste buds react to the bitterness of the beer. One study even identified a single bitterness receptor gene thought to determine this.

And it doesn’t stop there. Your taste buds also have separate receptors for cold. The bubbles in beer activate these sensors in just the same way as minty toothpaste.

Again, your genes determine how strongly you react to this. Some people will find this cold sensation unpleasant. Combined with the bitterness of the hops, that can make the beer-drinking experience far less enjoyable for them.

All this explains why some people dislike beer so much they never want a second glass. And others, of course, go on to love it.

The role of food in enjoying beer goes further than giving you something to help absorb the alcohol! It can also change the way you experience the flavor.

As we’ve seen, the acids and ethanol in beer trigger the bitterness receptors in your taste buds. But the messages they send to your brain can be drowned out by other, louder messages.

Both sweet and salty flavors can help detract from the bitterness of beer. That’s why salted peanuts are a common bar snack.

By reducing the bitter taste, they can also help you identify and enjoy the more subtle flavors of individual beers.

But if different foods can enhance the flavor of beer, beer can also enhance the taste of certain foods. Those that are high in protein and fat – a juicy burger, or a cheese-laden pizza – can be balanced by beer.

It can even help digestion by stimulating the production of more gastric acid. This helps to break down the food in your stomach. So a bottle of beer can actually help your body digest your cheesy pizza.

We know that alcohol has a whole range of effects on the way we feel – including acting as a depressant. But beer also has a trick or two up its sleeve when it comes to our emotions. And that even goes for non-alcoholic versions.

A 2013 study by the Indiana University School of Medicine gave male volunteers tiny samples of beer. The scientists then monitored their brains as they drank.

They found that the beer triggered a dopamine hit in the brain. Dopamine is a chemical associated with experiencing pleasure. Even though the men had consumed hardly any alcohol, the beer still seemed to reward them with a dopamine high.

In other words – beer can make you feel good, even when there’s no alcohol involved. But as with the bitter taste, it seems genetics also have a part to play here.

Some of the men in the study had close family members with a history of alcohol dependency. Those men experienced a larger dopamine hit from the beer flavor than those without such a family history.

And interestingly, the volunteers described wanting more beer after their sample. They were also given Gatorade as a control, but had no similar craving for the sports drink. The difference is particularly interesting as many of the volunteers said they preferred the taste of Gatorade.

So it seems that for some people, beer can make them feel good and want to drink more. That’s the case even if they don’t particularly like the taste, and even where their judgment isn’t affected by alcohol.

There’s some evidence that low levels of alcohol consumption can boost creativity. As a beverage that’s generally lower in alcohol, then, a single beer may help you generate good ideas.

A single beer before a brainstorming meeting, then, could help the ideas flow! But unfortunately, the alcohol will also make you less effective at tasks that require focus and concentration. And the study found the boost to creativity disappeared if more than two bottles of beer were drunk.

Some people argue that our palates adjust to the types of food and drink we’re used to. In Western diets, the theory goes, there’s a high proportion of sweet foods. That makes the bitterness of beer particularly unappealing at first.

But running counter to the unpalatable taste is the social pressure to drink. Many people talk about persevering with drinking beer, even if they didn’t enjoy it. In some cases, that first drink also led to the first hangover!

If drinking beer is associated with sociability – fun times with friends – even an unpleasant favor won’t put some people off. And there’s a whole marketing industry around beer designed to underline the message that it’s an essential part of socializing.

Beer marketing is an enormous business, with big brands spending huge sums of money on it every year. In 2019, the two biggest US spenders – Anheuser-Buch and Constellation Brands – spent US$787 million dollars on advertising.

Perhaps it’s not surprising that a little bitterness isn’t enough to counteract this Herculean effort to get us drinking beer.

7. A variety of flavors

If you strongly dislike the bitter flavor of beer, it’s unlikely that a different type will change your mind. But for those who don’t have such an aversion, there’s a wide range of different beer styles to try.

The best way to decide what you enjoy is to sample those different kinds. You may see references to IBU – International Bitterness Units – in descriptions of beer. But the IBU figure on its own won’t tell you how you’ll experience the flavor of the beer.

That’s because it measures quite a specific thing – how much of particular substances the beer contains. Those substances are polyphenols, and isomerized and oxidized alpha acids. They have a bitter flavor – but they will also react with other ingredients in the beer to affect the overall taste.

The IBU measurement may be useful at the extremes. You’re pretty safe to assume that a barleywine with an IBU of 110 will taste more bitter than a wheat beer with an IBU of 10.

But if the hops in the beer have a strong malty flavor, that can balance out the bitterness. For that reason, an amber ale can be experienced as less bitter than a beer with a higher IBU.

The real benefit of IBU measurements is to brewers, who need to ensure consistency across different batches. But to find a beer that tastes good to you, the best possible tools are your own taste buds.

We hope you’ve enjoyed our round-up of the various reasons people enjoy beer!

When it comes to taste, it seems that your genes play a big part in how much you like – or dislike – beer. But feelings of pleasure and relaxation, plus social pressures to drink, also play a part. And a single beer can even help people feel more creative.

Whether you’re a beer lover or loather, or somewhere in between, we hope this has helped you discover why. Cheers! 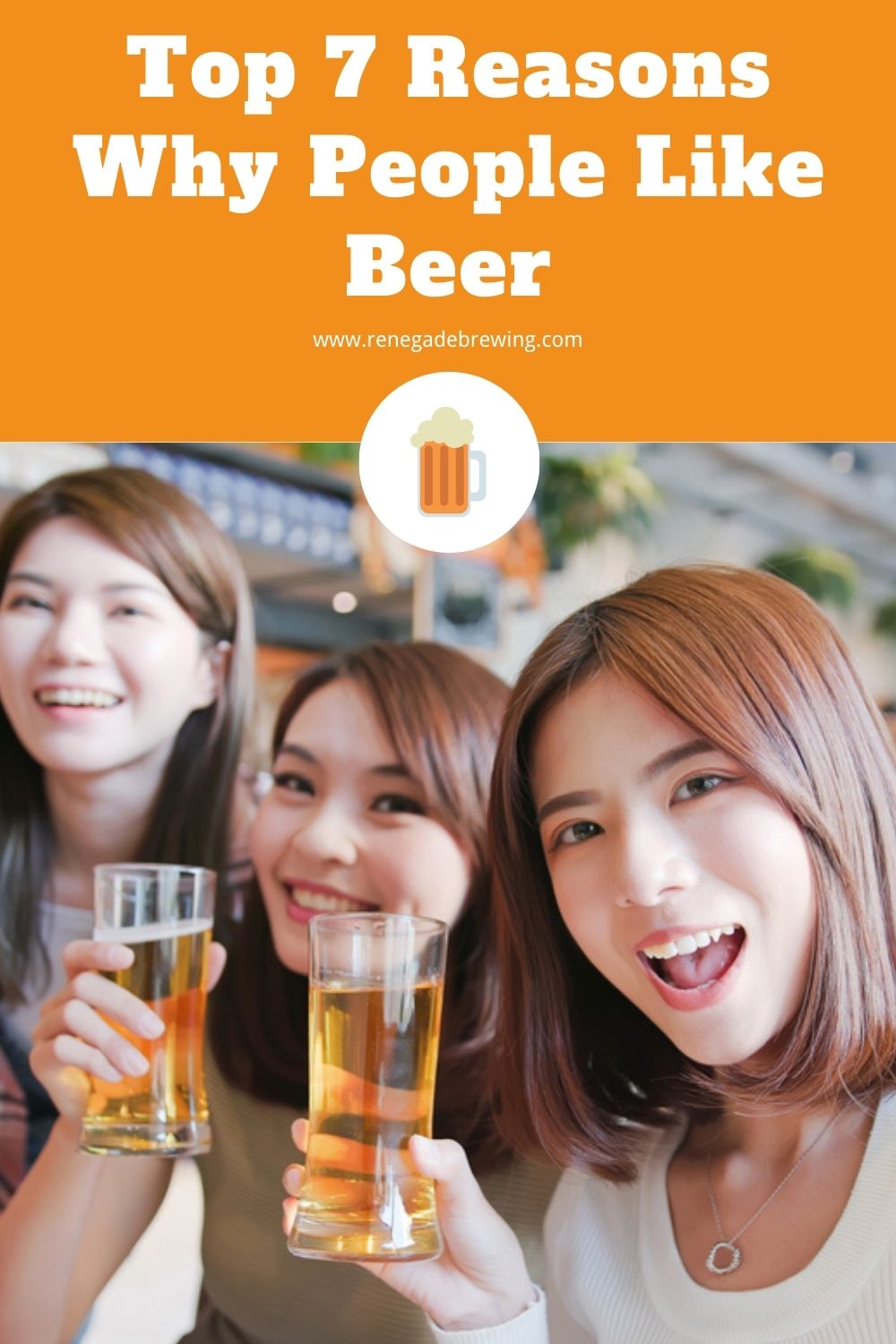