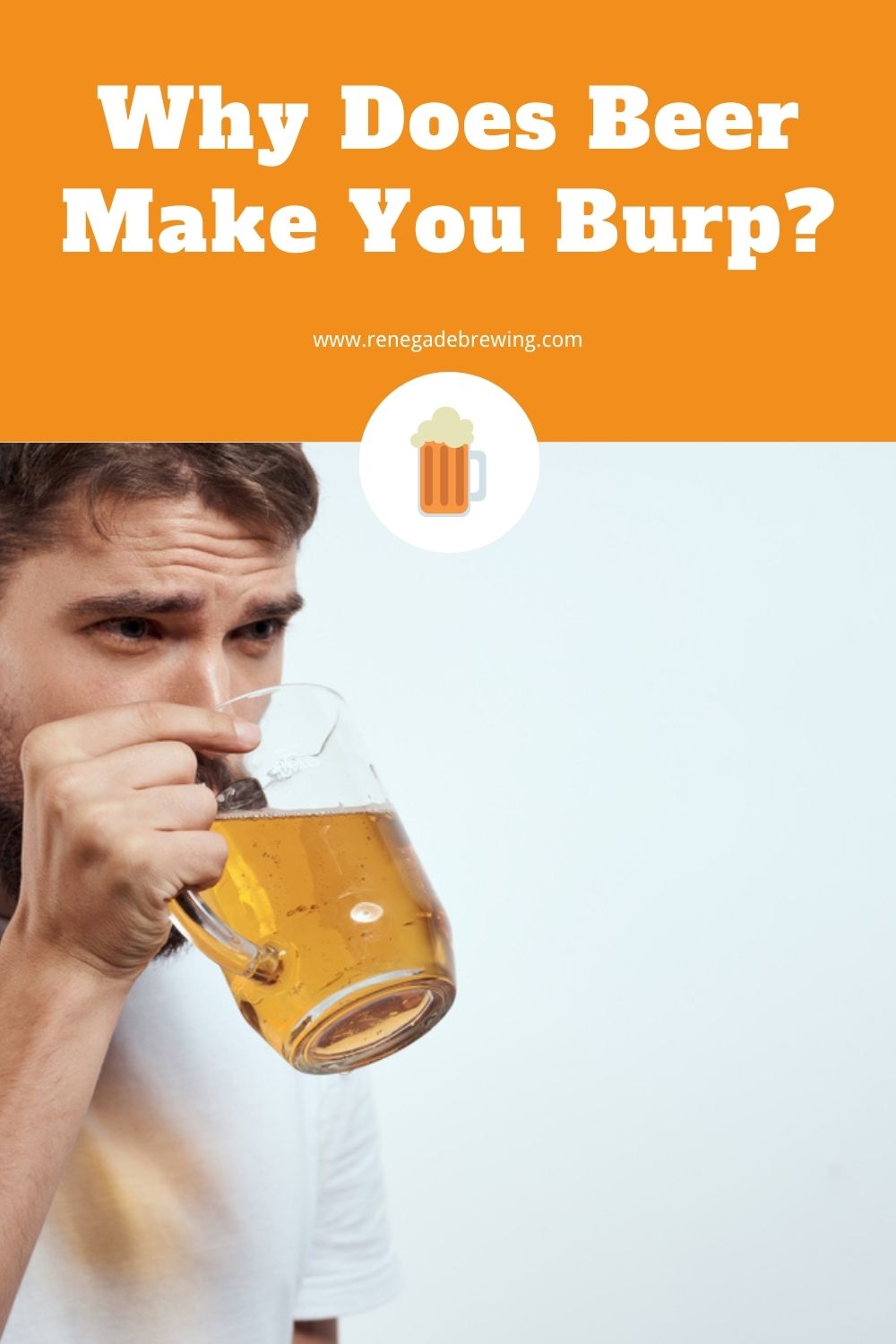 Who doesn’t love a cold refreshing beer on a hot day? But when you want to slake your thirst and drain that bottle fast, one thing might stop you. Yes, the threat of what comes next – especially if you’re in polite company!

But why does beer make you burp? We’re going to check out the science behind this mostly funny, and occasionally embarrassing, phenomenon. And we’ll find out if there’s anything you can do to stop it.

What are you drinking?

Let’s start by taking a look at what’s going into your body when you drink beer.

Whatever style of beer you’re drinking, it will have four key ingredients. Those are malt, hops, yeast and water. Some craft beers add extra flavors too – we’ve come across versions with such exotic extras as sunflower seeds and coconut.

During brewing, the starch in the malt is converted to sugar by the yeast. And it’s also the yeast reacting with the brew that carbonates your beer. In other words, it gives it those bubbles!

It’s the bubbles – or more specifically, the carbon dioxide they contain – that leads to burping.

What happens when you drink beer?

When you drink a beer, it goes down your throat – or esophagus, if we’re being posh – and into your stomach. As we’ve seen, beer contains carbon dioxide. Carbon dioxide is a gas, so that gas goes into your body as part of the package.

With the gas levels increasing in your upper digestive tract, your body needs to get rid of it. So it passes back up through your throat and out through the easiest exit – your mouth. This is the burp!

But it’s not just beer that is a cause of burping. Other carbonated drinks will have exactly the same effect – soda or fizzy wines also introduce more carbon dioxide to your system. It’s simple – more gas in means more gas out!

Bloating is the sensation of feeling uncomfortably full, and it also results from the gas inside your digestive system.

Research suggests that some people are more sensitive to the gas in their stomach and intestines than others. So even if the same amount of gas is present, they may feel more bloated.

But whether you burp or feel bloated after drinking beer, the root cause is the same – carbon dioxide. We’re going to take a look at how those effects can be reduced.

Why do I burp more when I drink quickly?

You may find you burp even when you haven’t drunk any carbonated beverages. This is what holds the key to the mystery of why you burp more when you drink quickly.

The majority of gas inside your digestive tract isn’t carbon dioxide. Most is simply air that you’ve swallowed whilst eating or drinking.

If you swallow quickly, you’ll consume more air. This is in addition to the carbon dioxide you’re ingesting in your beer. That means that drinking quickly means more gas accumulates in your throat and tum. And of course, the result is that more comes out in the form of burps.

It’s all about the glass

If you drink your beer directly from the bottle or can, you’ll be consuming all the carbon dioxide it contains. But if you decant it into a glass, some of the gas will escape.

Tipping the glass at a 45-degree angle as you pour will have even more of an impact. Position your bottle or can so that the stream of beer hits the side of the glass. This will knock out some of the carbon dioxides, so less goes into your throat and stomach as you drink.

Chilling the glass before you pour will help too. The difference in temperature will cause the liquid to cool rapidly, releasing more gas.

That gas will bubble upwards through the beer and help form a thicker head. That’s the band of foam on top of your drink.

A good thick head has a number of advantages in its own right. It helps improve the mouthfeel of the beer. And it traps the aroma, giving you a delicious beery fragrance as you raise the glass to your lips.

All this means there are plenty of good reasons for treating your beer like champagne – pour it into a glass!

What else can you do to reduce gas?

As we’ve seen, carbon dioxide is the main reason beer causes us to burp. But there are other things that can give us a gassy tum too. And that means there are different things you can do to tackle it.

Chewing gum and hard candy can also result in gas getting into your body. The issue here is that they involve chewing or sucking for long periods of time. When you do that, you swallow more often too – and that means ingesting more air.

If you’re a regular gum chewer or hard candy sucker, cutting down can make a big difference.

It’s a similar story when it comes to smoking, and even wearing dentures. Inhaling the smoke from a cigarette also involves swallowing down air. And if you wear dentures and they don’t fit snugly, they can create pockets of extra air. These are then swallowed down with your food when you eat.

Cutting down cigarettes, or better yet, giving them up altogether is sound advice for a whole range of health reasons. But if you want to reduce gas, this is another one to add to the list!

And denture wearers suffering from excess gas may want to get the fitting checked by a dentist. Poorly fitting dentures can trap food as well as air, and can be very uncomfortable.

Last but not least, moving around can help too. It may not feel like the most appealing thing to do when you’ve settled down with a beer! But going for a walk after you’ve finished can help avoid air or carbon dioxide settling in your digestive tract. And that might be all it takes to avoid belching.

Another thing you can do is to check the gas content of your beer.

But those averages conceal significant variations between different types of beer. English and Irish stouts, brown ale, barley wine and bitter, for example, are typically the least carbonated. Expect each pint to contain between 1.5 and 2 pints of carbon dioxide.

White ales, lagers, IPAs, porter, bock, and cream ales are fizzier. They’ll usually have a carbon dioxide level of between 2.1 and 2.6 pints for every pint of beer.

German and Belgian beers tend to pack in more carbon dioxide still. Belgian Lambic beer has a carbonation level of between 2.7 and 3.1, while German Weiss usually has a level between 3.2 and 4.2.

Check the carbonation level of your favorite brand

These differences reflect the different brewing traditions and styles of the beers. There’s nothing inherently better or worse about them. But if you want to cut down on the gas, going for a beer with a lower carbonation level will certainly help.

Bear in mind that all these ranges relate to the carbon dioxide in the beer when it’s in its bottle or can. Other factors, like serving temperature and whether the beer is poured into a glass, will affect final CO2 levels.

Remember – dispensing your beer into a chilled glass at a 45-degree angle will automatically reduce the amount of gas it contains.

And if your beer is coming from a keg, the carbon dioxide level will also be affected by the regulator. A good bartender will aim to maintain the level as close as possible to the target carbonation for the recipe. But depending on how successful they are, a beer can either gain or lose fizz.

Whether you burp or feel bloated after drinking beer, it’s the carbon dioxide it contains that’s to blame. And if you drink quickly, you’ll exacerbate the problem by adding extra air into the mix. All that gas in your system has to be expelled with a burp! No burping, and you’ll just feel full and bloated instead.

Slow down your drinking, and you’ll reduce the risk of burping. Pouring your beer at an angle against the side of a chilled glass will help too.

And check the carbonation level of your favorite beer. If you’re suffering from gas, consider swapping it for something that contains less carbon dioxide.

We hope we’ve given you all the information you need about beer and burping! You’ll now be able to enjoy your next drink with a lower risk of unpleasant side effects! 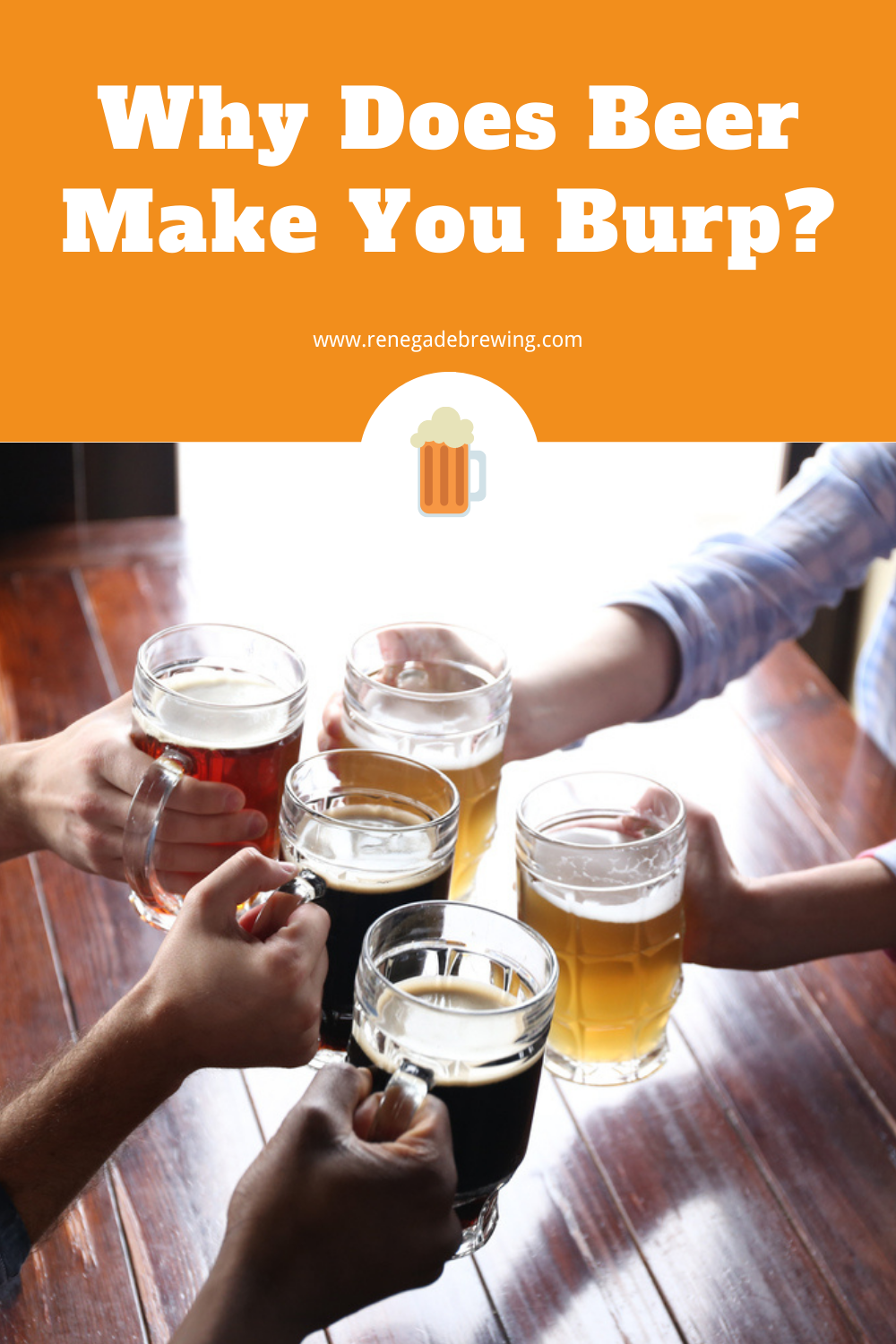