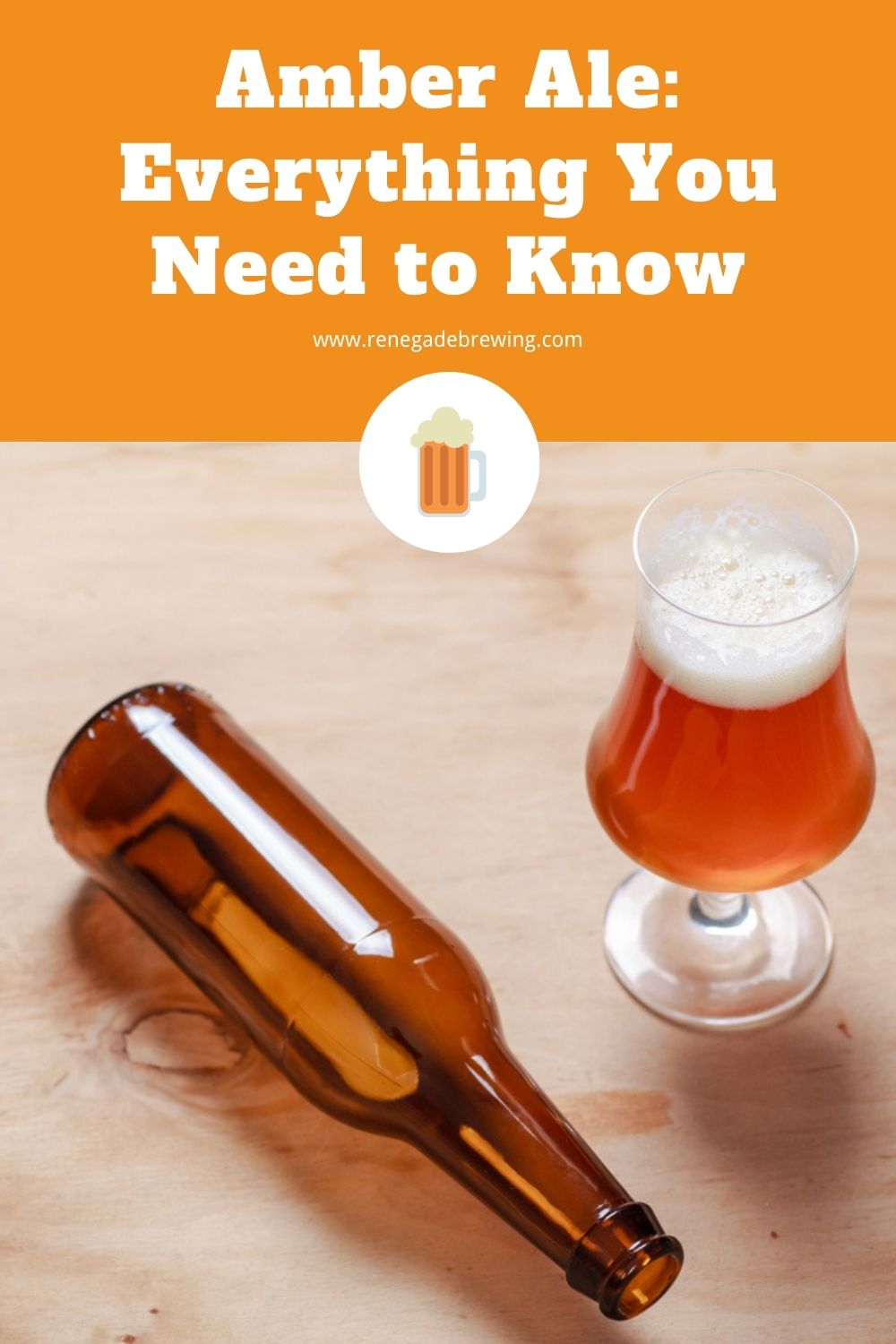 There are light and dark beers available on the market, but an amber ale is an extraordinary category. This beer is one of those drinks that you either love or hate without the possibility of the middle ground.

It has a different color, flavor, and brewing recipes than all other existing beers. If you are one of those who dream about producing this unique beverage, it is time to see what makes it so special.

No Amber Ale recipe originated in Europe or any other continent except America. Brewers in the Pacific Northwest and California were the first ones to make this beverage in the 1980s.

However, its popularity quickly spread all over the US, and a new beer type was born. Although the term Amber Ale is the most common for this brew in North America, you can hear people from the states of Washington, California, and Oregon call it the West Coast Ale.

Plus, many people call it a Red Ale or American Amber Ale, depending on the region where they live. On the other hand, you will look for Amber Ale in Australia when you want anything besides dark beers or blonde lagers.

The British usually use the name Brown Ale for this beer type. The catchphrase Amber Ale was first applied to distinguish this beer from Pale Ale on the one and Dark Porter and Stouts on the other side.

Nowadays, you can also find this beer labeled as Scottish Ale, Irish Red Ale, extra special bitter, or German Alts. Brewers are often highly creative in marking the same beer type with new terms to stand out from the market’s standard offer.

Some connoisseurs make distinctions among these names, while others take them for synonyms. In both cases, it is a beer similar to Pale Ale without the characteristic straw shade. On the other side, it is never darker than brown beers.

If you seek your favorite Amber Ale on the SRM beer color chart, you will discover it somewhere between values 10 and 20. Still, its shade can vary significantly in this range, depending on the brewer, the exact recipe, and the beer age.

Nowadays, Amber Ale is a label for the type and style of beer, more than just a definition of color when that phrase was used for the first time. Therefore, the description ‘darker than Pale Ale and lighter than Stouts’ is probably the most approximate interpretation of this beer’s color.

You can check this by buying several different Amber Ales, pour them into identical glasses, and line them up next to each other. Although minimal, color differences will be visible to the naked eye, even to a complete layman.

If you enjoy Pale Ale taste but want to feel more malt in your beer, Amber Ale will be your perfect drink. Brewers use crystal malts to enhance the flavor, characterized by full-body taste, caramel notes, and additional flavorings like toffee.

American Amber Ale is a medium-strength beer, with an ABV (alcohol by volume) percentage between 4 and 7. Many breweries enhance it with specific flavor additions, creating creamy beer variants, intense aftertastes, and rich foam.

Thus, there is a palette of different flavors in this category, and everyone can find the beer they like best. For example, English Amber Ale has more sweetness than the American type, which often includes a delicate citrus flavor due to American hops in the recipe.

On the other hand, the Australian Endeavor Vintage Reserve Amber Ale is a craft beer that changes its taste every season. It can include hazelnut, cinnamon, or cocoa flavorings.

Many users of this beer describe the taste as a mouthful, pleasant, but not too intense. That makes it a good choice for those who are just entering the world of craft beer.

If you order an Amber Ale in a bar, you will probably get it in a tulip or chalice glass. Another option is a stein or mug glass. The reason for the specific serving way is that all these glasses have a wider bottom than the top, so they retain the beer taste’s fullness.

Keep in mind that you will more enjoy malty and hops flavorings if you drink this beer chilled rather than cold. If you drink beer at home, it will be best to put it in the fridge half an hour before consumption. The ideal temperature for Amber Ale serving is around 45 to 54 F (8 to 12 C).

As far as pairing with food goes, Amber Ale is a versatile beer you can drink with almost any meal. The lighter variants fit excellently with stews, chicken, or pizza, for example.

If you are up for a deep Amber Ale, you will probably enjoy it during dinner, with some red meat or a dessert, like chocolate cheesecake. Some people prefer to taste amber beers with more neutral foods, including rice, vegetables, or fish. So, anything goes if you choose it that way.

Plus, you can use this brew for cooking. Add some in a casserole, meat pie, or pour it over raw steak when preparing dinner, and you will get the ultimate recipe for true gourmands.

Although traditional Amber Ale originates in North America, you can find American Amber Ale in different flavors and alcohol content worldwide. Plus, many breweries in Australia and Europe have created their own versions tailored to the local affinities.

One of the most famous Amber Ales in the US is Fat Tire Amber Ale, created thanks to American bikers traveling through Belgium. This beer contains exclusively European grains and hops, but it is crafted American way.

Other famous Amber Ales are Flipside Red IPA and Bell’s Amber Ale. There is also Tröegs Nugget Nectar, which the brewery releases only once a year due to its ingredient specificity, including full flowers, pine flavorings, and citrus.

Germany is known for quality beer, so there are several Amber Ale styles in this country. You can try Bavarian Amber Rye Beer, Rauchbier, aka Smoked Amber Beer, or Kellerbier, better known as Cellared German Beer.

If you travel through Europe, you will probably have the opportunity to try the famous Belgian Creamy Ale or British Brown Ale, as well.

Interestingly, the most famous Mexican amber beer, Dos Equis, was made by one European brewer. German Wilhelm Hasse created this beer popular in California after immigrating to Mexico in the late 19th century.

Australian beers are well-known for their eccentric names. Their most famous Amber Ale is James Squire Nine Tales. However, that’s not all! You can also order the Mountain Goat Fancy Pants or Endeavor Vintage Reserve.

These beers are more reminiscent of British Brown Ale than the original American Amber Ale. Namely, they are darker than American beer, so their color draws more on reddish-brown than on golden amber shade.

Although the brewing procedure itself is the same as for all other beers, the Amber Ales’ ingredients are somewhat different, hence the distinction in flavor and color.

You should use medium light or dark malt crystals instead of light ones and longer roasted grains to make this brew. Plus, American grains and hops replace the traditional choices of ingredients typically used for a Pale Ale.

Most breweries make unfiltered American Amber Ale or use filtration minimally. Since fermentation occurs at a stable temperature of 67 F (19 C), the whole process results in a slightly hazed beer.

Many Amber Ales contain added hops afterward, which give them a more intense taste and a darker color. If you want to reduce their bitterness, you need to add flavorings, like citrus, flowers, or fruity extracts.

Amber Ale has a slightly higher percentage of alcohol in it. While most Pale Ales don’t exceed 5% ABV, an average for Amber Ales is 4 to 7% ABV. This value can be higher, up to 12%, in some types.

What they have in common is that the breweries use American hops for both brewing styles. However, malty notes dominate the hops in Amber Ale flavor. Besides, a Pale Ale lacks the unique caramel tastes that many beer drinkers enjoy.

Amber Ale is recognizable by its color, but it also differs from other beer types by its malty taste. It is darker than Pale Ale, and it can vary in shade from dark gold to brown. Remember that there are several different names for this beer, depending on the region. 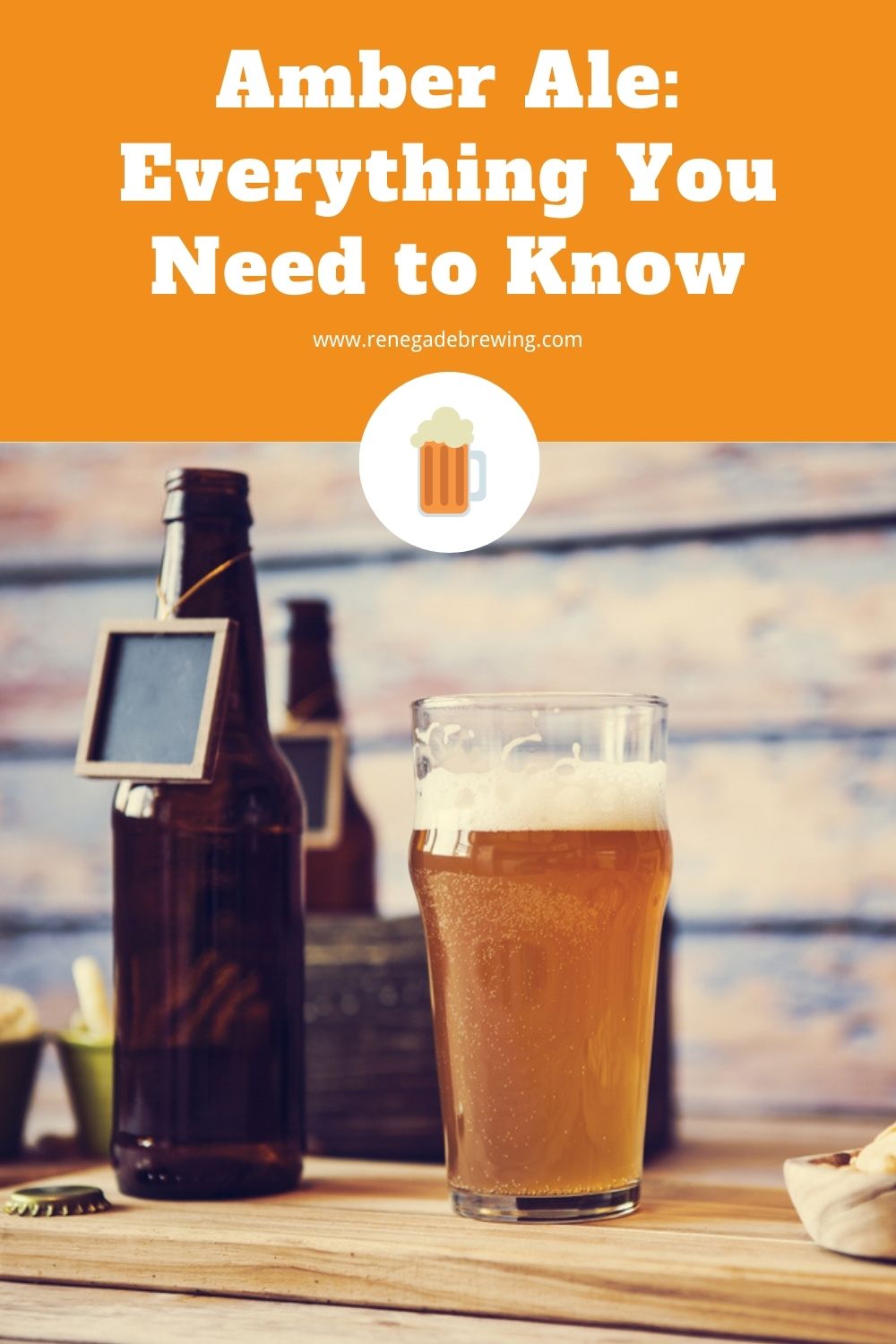