Wheat beers are pretty popular. That’s why there are so many varieties, from witbiers to hefeweizens. And while the base brew is the same, there are differences in proportion, brewing temperature, fermenting position, and more. So let’s discover the best wheat beer. 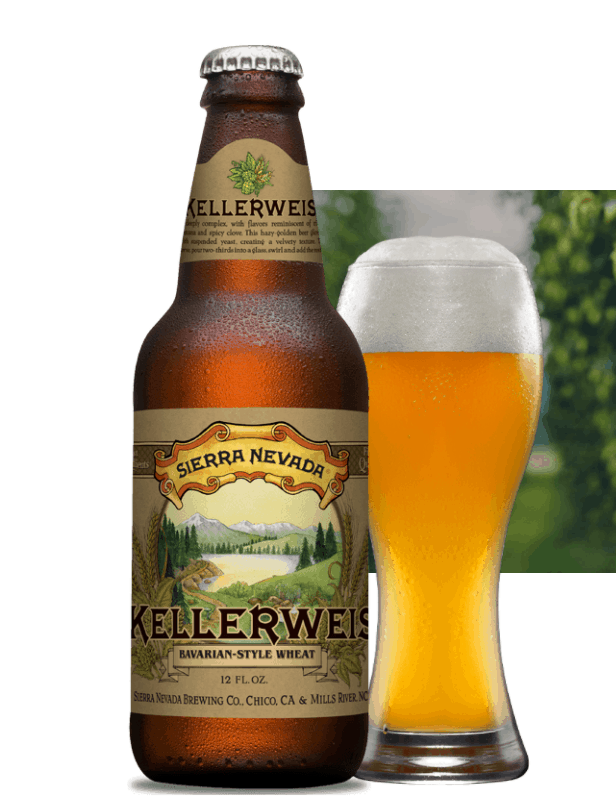 In Europe, beer bottles mostly come in half liters (roughly 16 fl. oz) though you can find some in 330ml. But here, the commonest size is 12 fl. oz. That’s what you get from Sierra Nevada’s wheat beer. It’s a 4.8%ABV beer that announces itself with the legend ‘untamed, unfiltered, unafraid’. This American craft beer is brewed the Bavarian way in open vats.

This makes it an ‘American hefe’ and gives the hazy ale a fruity scent with a mix of banana and clove. If you’re watching the Balling Scale, this is a 12.3 beer (so it counts as a 12). And yes, Kellerweiss is a wheat beer, but it uses barley malts in addition to wheat. The malts are German Two-Row and Munich (plus wheat) while the hops are Sterling and German Perle. 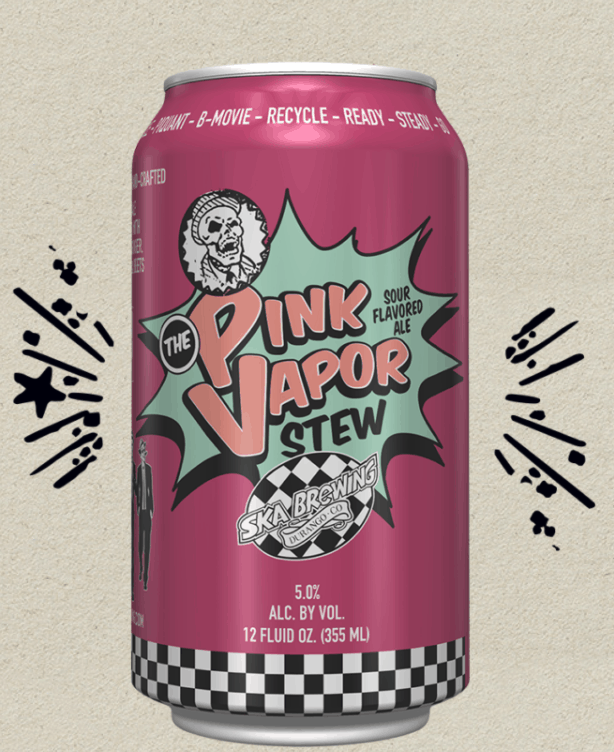 Ska Brewing has had a harsh few years. They opened in 1995 and operated from a shared space in an Industrial Complex. After years of work and planning, they opened their own facility in Boulder, Colorado. That was in March 2020. After lunch on launch day … everything got shut down for Covid. Including local restaurants, bars, and breweries.

So if you want a wheat beer to explore, try the gorgeously-named Pink Vapor Stew. It’s a magenta-colored sour ale flavored with root veggies and canned all-year-round. You can order it online too. The beer is a collaboration with a ska band named The Aggrolites. Flavors include ginger, apple, carrots, and beets with Belma and Citra for hops. 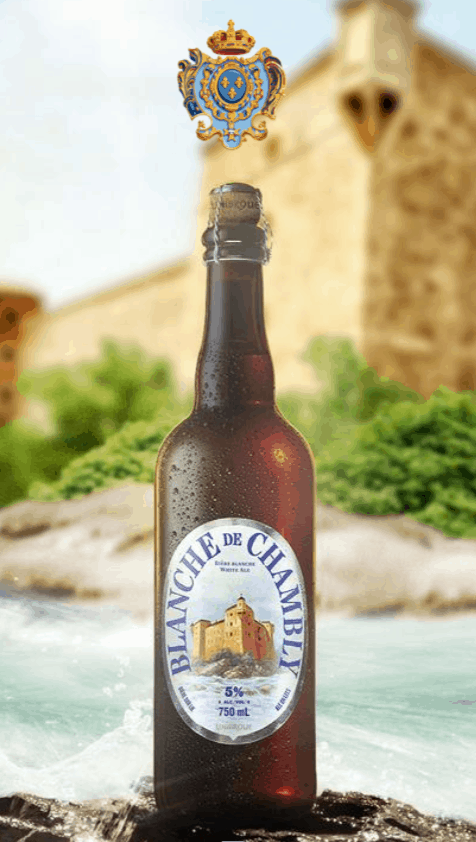 Let’s look north for the best wheat beer. This Canadian 5% ABV won the 2020 award for Best Belgian-Style Witbier. It’s light and fabulously fizzy. Taste notes include orange peel, coriander, and a touch of pepper at the back. The beer has a medium body, a pale gold hue, and a creamy white head. It’s a cloudy beer ‘with bubbles like champagne’ and an IBU of 10.

This top-fermented beer has notes of honey, citrus, and spicy bread. It has won close to forty global beer awards (and counting) and is Quebec’s best-selling beer, both locally and abroad. Blanche de Chambly is named after a stone fort from the 17th and 18th Centuries. Drink it in a footed flute to inhale the aroma and retain the effervescence. It pairs well with fish and fowl. 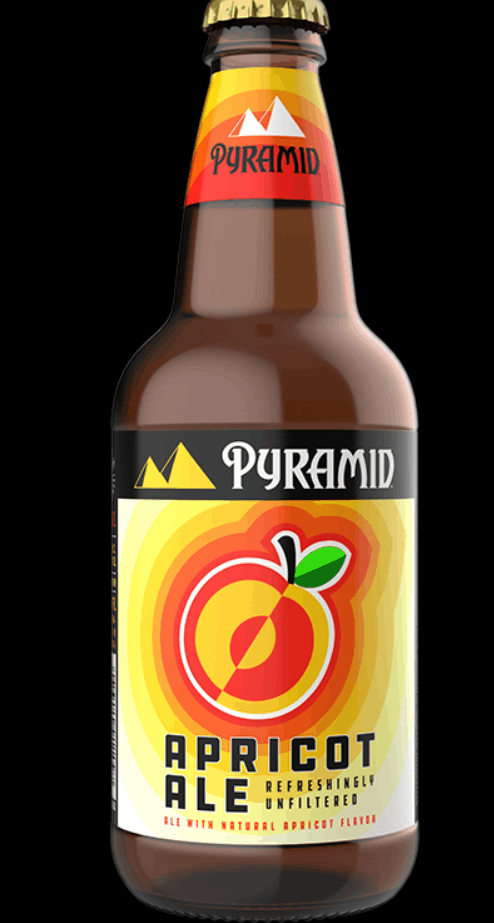 We’ve looked at an American hefe and a Canadian witbier. Now let’s try something fruity. It’s classified as a weizen. (Which differs from a hefeweizen because hefe’s have yeast and weizens don’t.) This unfiltered ale has an ABV of 5.1% and an IBU of 11. Being a weizen, it’s a 50/50 it’s half 2-row barley malt and half wheat malt. These are mashed with Nugget hops.

The cloudy beer has won several beer awards. Pyramid Brewing is a South Seattle-based artisanal spot that started in 1984. Their Apricot Ale is sweet without being syrupy. It’s a hazy beer so its mouthfeel is smooth but grainy. The fruity feel is distinct because the brew has both fresh and dried apricots to fortify the flavor. It has a bit of bitterness for balance. 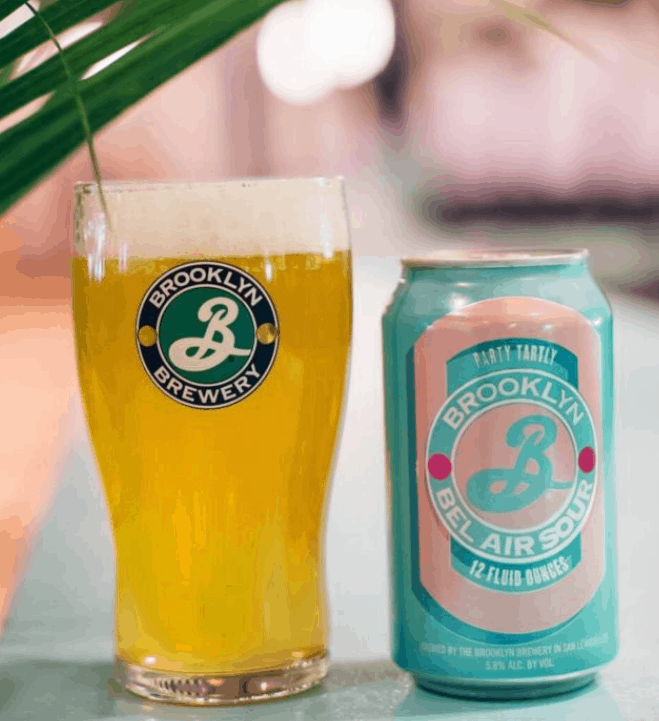 This New York beer comes in two cloudy variants. One has an ABV of 4.5% while the other tops at 5.8% so be sure of what you’re buying. The wheat beer is stuffed with tropical hops so it starts sweet with a tart finish. This 13° beer has no real fruit but its nose echoes fructose quite convincingly. There are notes of passion fruit, pear, apple, lemon, and tangerine.

There’s some stone-fruit in there as well – specifically peach, plum, and apricot. You may feel a touch of coffee on the palate. These scents come from the fruit-forward hops (Amarillo, Challenger, Mosaic, Perle) and in-house ale yeast. The brewing malts are American 2-Row barley and pale wheat. The beer also uses lactobacillus for that touch of tart and a thick head. 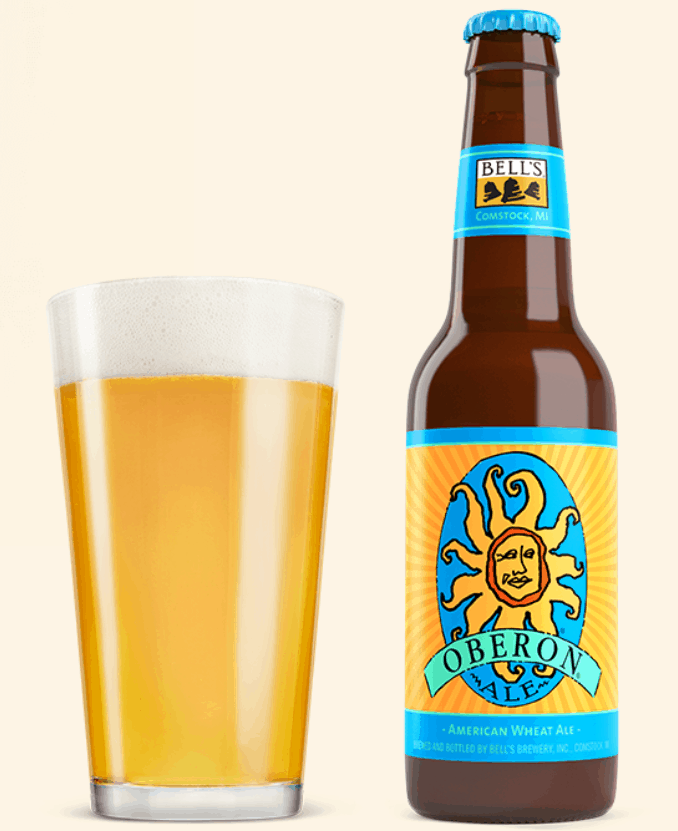 You may know Oberon as Shakespeare’s jealous Fairy King. Or maybe you’re more familiar with a moon on Uranus. (Uranus has 27 moons, all named after characters in famous Elizabethan plays.) But right now, we’re talking about beer. And Bell’s Oberon is a fruity beer with a spicy kick. It’s a 5% ABV beer with 182 calories per bottle and 16.2g of added sugar.

It’s a bright, hazy yellow with a thick head. And it has the solid scent of spicy orange citrus even though it doesn’t use any actual fruit or spice. Like many wheat beers, those persuasive notes come from the hops. Oberon combines European and American hops into a composite pellet that gives the beer its tempting aroma and satisfying flavor. It’s great for summer. 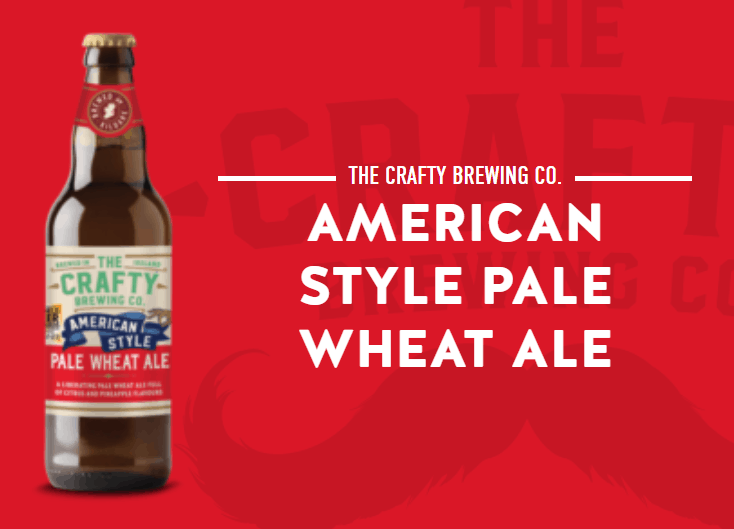 Customized things are always nice. They make you feel valued, precious and seen. So as you browse wheat beers, try this Irish one, brewed with your palate in mind. The Crafty Brewing Company submitted this ‘American Style’ pale wheat ale last year (2020). And it won gold. The beer has a thick, fluffy head and an ABV of 5%. The citrus gives the beer a bit of a bite.

This beer is brewed by Rye River Brewing exclusively for Lidl, hence the mix-up. And it has lots of awards beyond last year’s gold. The beer uses American hops (Mosaic and Cascade) to give the beer its fruity nose. You’ll spot hints of pineapple and other tropical fruit. The bitterness in the background balances it out. The wheat malt has a biscuity flavor in taste and scent. 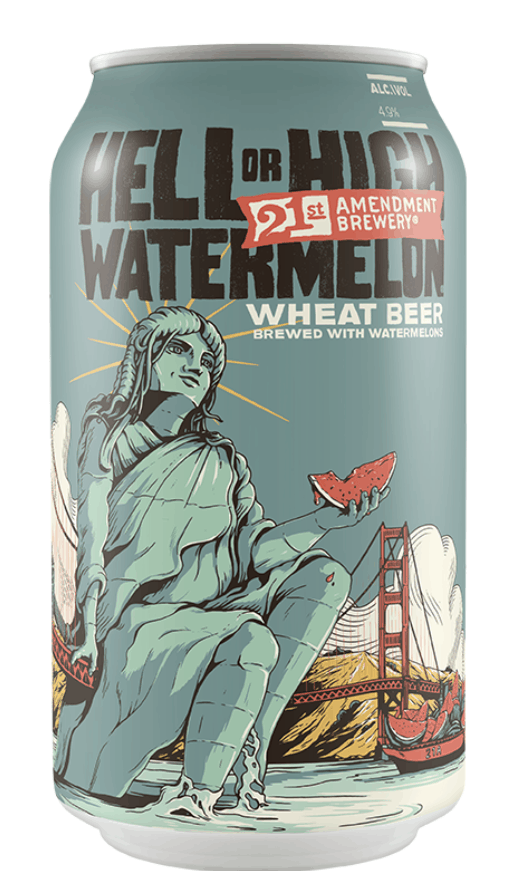 As names go, both this beer and its brewery are winners! And while the recipe seems … surprising, the cover art is pure genius. Just think – Lady Liberty chomping on a watermelon! So … about this beer. It has an ABV of 4.9% and an IBU of 17. Unlike some of the other fruity beers that draw their flavor from their hops, this one has real watermelon.

And yes, it tastes better when you sip it while chewing on a watermelon wedge of your own. The beer is seasonal – you can only order it from April to September. The wheat beer is brewed whole them ‘seasoned’ with watermelon puree. The wheat used in the mash is white, and it’s mixed with two-row pale barley and Magnum hops. Each serving carries 152 calories.

No wheat beer discussion is complete without mentioning Ayinger. It has the gold medals to prove it. Urweisse is a hefe – the word just means ‘original white’ (as in white beer or wheat beer). It’s a darker beer, copper-colored and effervescent with a thick, steady head. The beer has an ABV of 5.1%, an IBU of 13, and a calorie count of 185 per serving – about 12 oz.

The beer has barley in it but the malt is 60% wheat. This gives the beer a fruity start with clear banana notes. The sweetness of ripe bananas balances with the spiciness of clove, and both these elements come from the hops. The finish is decidedly bitter but in a good way. The fruity flavor is heightened with traditional in-house witbier yeast.  It has 13.5g of carbs. 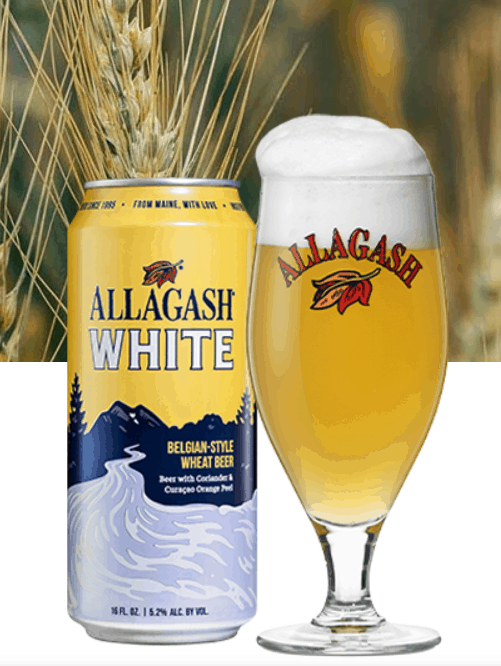 A lot of wheat beers use barley for balance, but here’s something else you can toss in – oats! Allagash White has it all – the wheat, the oats, the barley, and the street cred. This award-winning beer goes hard on the grain. It has six different kinds. The base is its in-house blend of 2-row barley. Add red wheat, white wheat, Carapils, oats, and a dash of local barley malts.

The beer is heavily hopped as well – Crystal, Nugget, and Czech Saaz. All these fermentables result in a decent, award-winning simulation of Belgian beer. It has an ABV of 5.2% and s brewed with in-house yeast. The beer also has recognizable spicy elements from its coriander infusions. For fruit and citrus, it uses peels from Curaçao oranges. Its color is cloudy yellow. 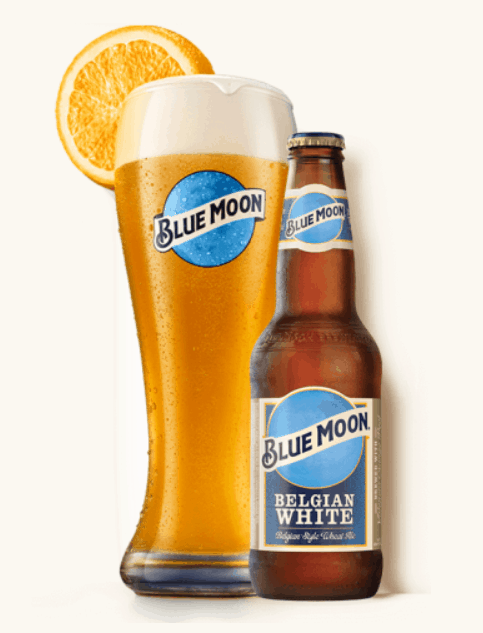 It may seem odd to serve citrus wedges in beer … but hear me out. An orange slice on the rim of your beer glass will heighten the flavor that’s already in the beer. Particularly this one, which happens to be infused with the peels of Valencia oranges. The beer also has generous doses of coriander so it has a satisfying dose of fruit and spice. Plus it has a thick stable head.

The beer has an ABV of 5.4% and an IBU of 9. As the name says, it’s brewed in Belgian style. It has the slightest haze and pours amber rather than yellow. Think copper, not gold. It has a bready, earthy feel that you might describe as ‘oily’ or ‘yeasty’. And while this beer is marketed as a craft beer, it has a more commercial feel. That’s not a bad thing – just facts. 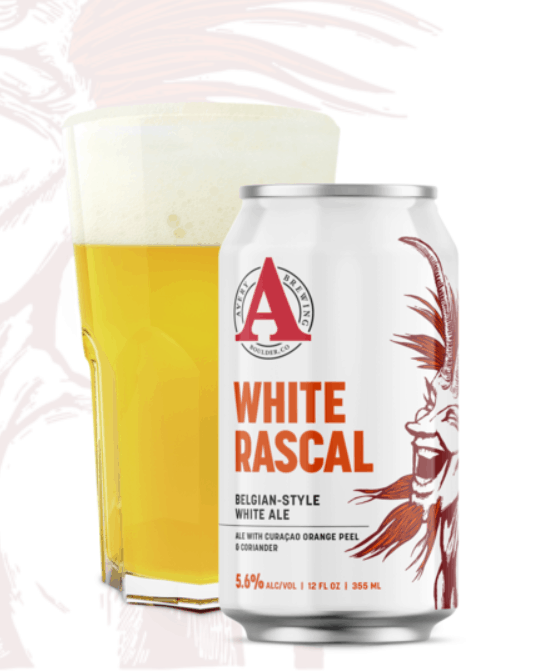 On to another witbier from Colorado. It’s brewed with Avery’s in-house yeast mix and left unfiltered so its profile is hazy. The citrus comes from Curaçao orange peels and coriander brings it out … fruitfully.  And in case you’re wondering why there’s a horned demon on the label, that’s an homage to Belgian folklore, with its immersive folktales about the supernatural.

White Rascal uses wheat malt and 2-Row barley malt in its mash. For hops, they use Sterling. It’s the same list of ingredients that were used in 15th Century Hoegaarden Village. The citrus sweetness counters subtle spice, resulting in a mouthful of zesty florals.  There’s a bit of pepper in the finish that gives it a nice kick. The beer has an ABV of 5.6%. 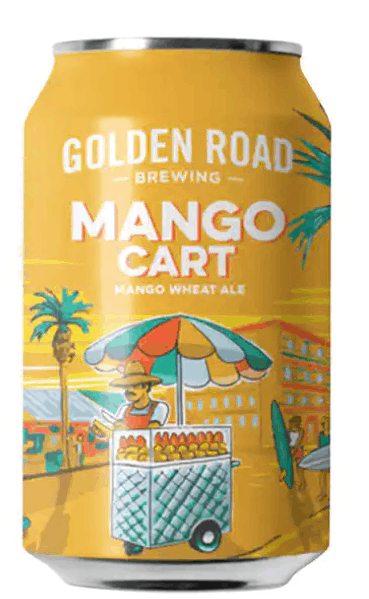 Did you know mangoes contain Vitamin C? So it’s not strange to find them in wheat beers that are often citrusy. In this case, Mango Cart is a 4%ABV wheat ale from California. It’s named after (and inspired by) LA vendors who sell fresh fruit on carts, just like the guy on the label. The beer has an IBU of 10 and in addition to wheat malt, it’s mashed with 2-Row barley.

The color of the beer is a slightly hazy gold that’s reminiscent of ripe tropical mangoes. The brew has fresh mango mixed in so the taste and aroma feel wholesome and authentic. But it can be overpowering if you don’t have a sweet tooth, so fair warning. The beer isn’t heavily carbonated though, and it has a medium body that stretches towards the thinner side. 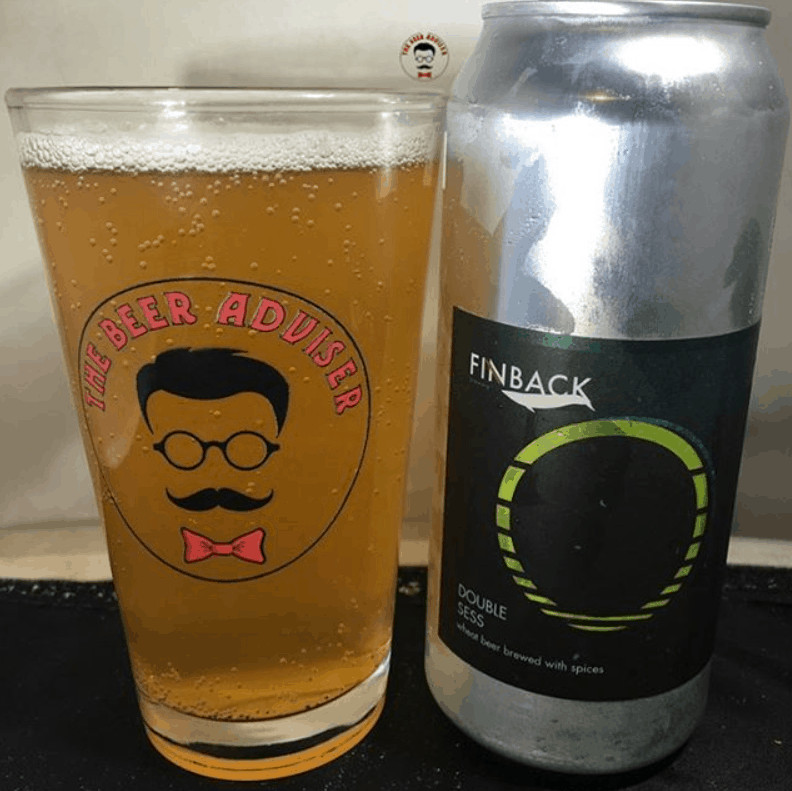 Sessionable beers are easy to drink for prolonged periods. Meaning you can swig a few bottles or chug a six-pack without too much drama. (You’ll avoid those nasty morning-afters filled with regret, strange stank, and hairy dogs). This could come from low ABVs or hydrating ingredients. Finback is a double-sess(ion) with an ABV of 4% and an IBU of 14.

This witbier has spicy floral flavors and aromas. The spice comes from chamomile, ginger, and Szechuan peppercorns. It’s bright yellow and mildly cloudy with a thick, creamy head that holds. The front is peppery with a citrus zest but the ginger comes out stronger as your session proceeds. At the finish, you’ll get the slightest hints of banana, vanilla, and clove. 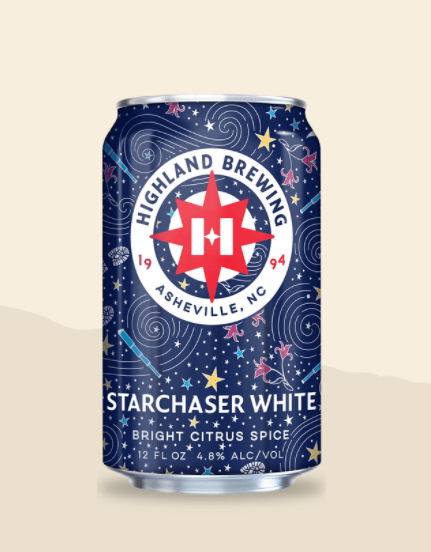 Highland Brewing came up with a pretty popular seasonal witbier. They named it Stargazer and it was well-received. Based on that success, the brewery improved their recipe and developed a year-round wheat beer they christened Starchaser. It has many of the same elements as Stargazer, including the design on the can. Its ABV is 4.8% and its IBU is 22.

This summery beer has notes of coriander and grapefruit peels. They also brew with Spicewalla ginger. This mix of fruit (peels) and spices make the beer bright and citrusy. The beer uses a blend of three hops – Saphir, Perle, and Hallertau Blanc. The grist has a mixture of flaked fermentables – oats, wheat, and rye – plus malted wheat and two-row barley.

What’s your favorite wheat beer? Is it on our list? Talk to us in the comments section! Tell us why you love it and maybe we’ll add it to this compilation …