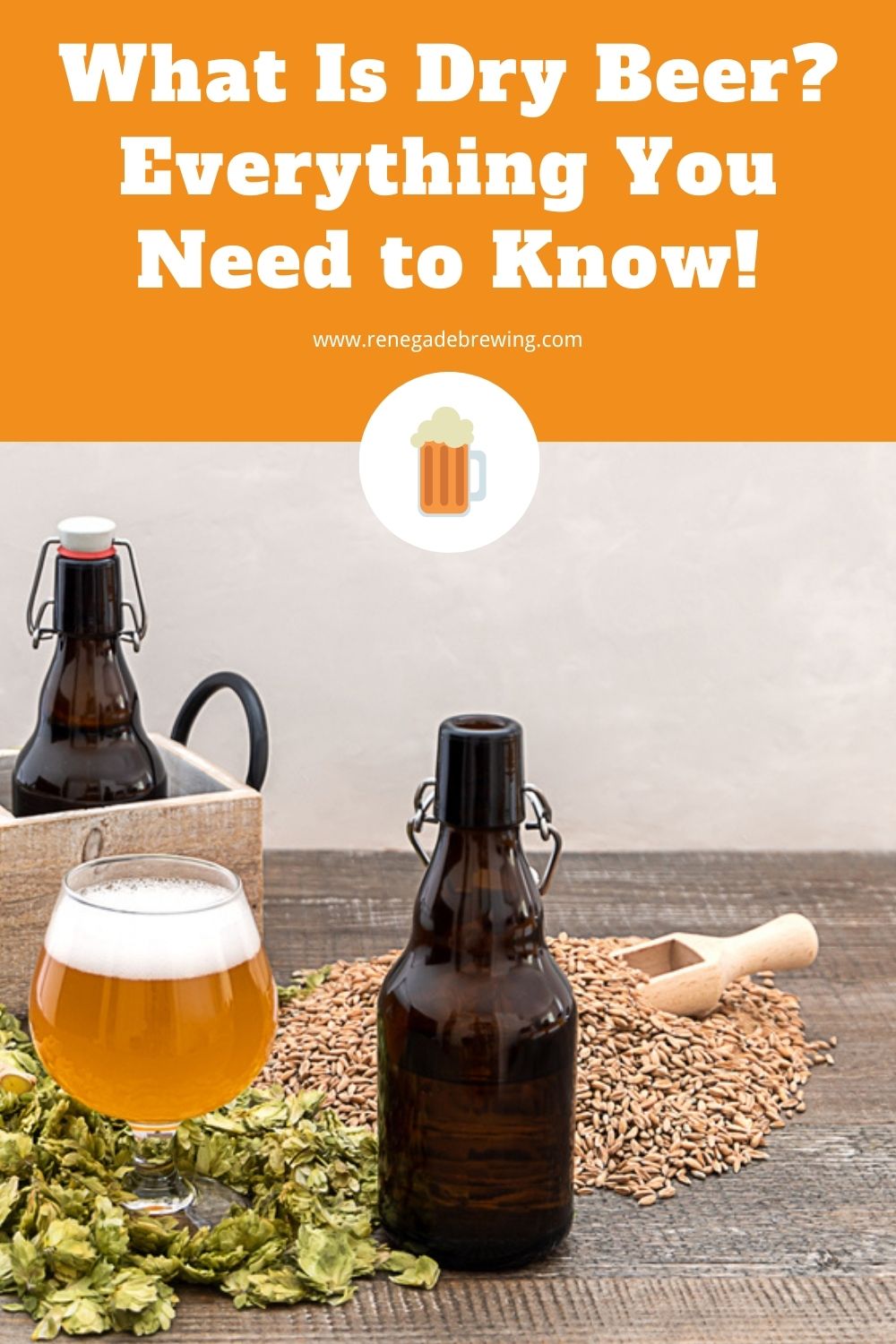 The phrase ‘dry beer’ that defines the beer type and quality can often confuse its enjoyers since most of them believe it refers to beer dryness. If you ever noticed writing dry beer on the bottle, you have probably wondered about its meaning.

Of course, you are not the only one confused with this term. There are many popular dry beers, and most people don’t know the difference between this particular type and regular beers. There is even a discussion on the Quora site defining what is dry beer and whether such a beverage is possible since beer consists mostly of water. Let’s see.

Dry beer means that a specific drink has little to no residual sugars. Therefore, the phrase dry means the antonym of sweet in this particular case. In other words, the amount of water in the beer has nothing to do with this particular term.

Beer dryness will significantly affect its flavor because a lack of sugar increases its bitterness. Plus, the dry beer won’t leave an aftertaste in your mouth. You will only feel its strong and refreshing taste in the moment of drinking.

Initially, the French used the term ‘sec’ (dry) to indicate champagne that had less sweetness in the taste. That way, real connoisseurs could avoid winemakers who added sugar to champagne just before closing the bottles and putting them on sale.

Nowadays, you can find several categories that describe wine dryness. However, the term dry is usually retained for all sugar-free alcoholic beverages or those with a low sugar level.

Still, dry beer is a relatively new category. As the NY Times article from 1989 states, the first dry beer was Asahi Super Dry, created in Japan in 1987.

This beer had a high percentage of alcohol instead of sugar. Alcohol users were delighted and quickly accepted this product’s sharp taste. Very soon, it accounted for about 40% of the total beer market.

The trend has spread to both the US and Europe over the next few years. At first, imported Japanese beer found its place in these markets, but local breweries started producing it by themselves almost immediately. Nowadays, you can buy local dry beers all over the world.

Also Read:  15 Best Gluten-Free Beer Brands You May Like

You can read super or extra dry on some beer labels instead of the usual dry beer label mark. These are brews fermented to such an extent that there is no trace of sugar at all.

These beers generally have an intense, bitter taste, light straw color, and ABV (alcohol by volume) above 5%. Plus, some breweries define these beers as low-carb or sugar-free, thus attracting customers looking for low-calorie beers.

The most famous is, of course, Asahi Dry Beer, which started the whole trend. However, many other well-known brands have produced dry beer, including Budweiser and Corona.

Although you can enjoy them with or without any meal, the crisp, unique taste of dry beers goes particularly well with spicy food, pizza, or smoked meat. Most Japanese traditionally drink dry beer with light foods such as sushi or chicken.

Surprisingly, there is no significant difference in ABV value between most regular and dry beer. Both kinds can offer various alcohol percentages, from low under 5% ABV to high value above 10%. For example, Pure Blonde beer contains 4.2% ABV, while Corona Extra and Hahn Super Dry have a similar alcohol level of 4.5 and 4.6%.

The reason is that the alcohol percentage in beer is directly proportional to the yeast and sugar ratio. The more sugar yeast decomposes, the higher is the beer ABV value. An example of the extremely high-alcohol dry beer is The Mighty Oyster, with 19.3% ABV.

Still, many dry beers have optimal ABV between 4% and 8% ABV. Most breweries try to produce dry beer because of its specific taste without increasing the ethanol percentage.

Many people mistakenly believe that dry beers contain fewer calories. If you are on a low-carb diet, you will be intrigued by a marketing campaign that promotes dry beers as a low-carb type.

The difference between regular and dry beer is negligible regarding the number of calories. The average traditional beer contains about 0.31 ounces (9 g) of carbs, while for its dry alternative, this value drops to only 0.07 ounces (2 g) per 12 ounces (355 ml) of beer.

Still, the difference of 0.25 ounces (7 grams) is like you skip on half a slice of bread. It can be a significant difference when you drink dry beer regularly. If you drink one or two beers from time to time, it won’t significantly affect your diet.

So, you will get only 5% of the recommended calory number by having one regular drink a day, while that value is 4% for a dry beer. In both cases, giving up this pleasure won’t reduce your body weight significantly.

When you brew regular beer, yeast breaks down sugars and turns them into alcohol. As a result, residual sugars give the beer sweetness. As you can guess, dry beer doesn’t have these residues.

There are several ways to produce dry beer. Some brewers give the yeast more time to react, while others use specific, highly efficient yeast strains that use a higher percentage of total sugar. They are more useful in creating a dry beer.

You can also go for so-called low-temperature mashing, which allows for prolonged enzyme activity, creates more simple sugar, and uses little to no crystal malt.

As I mentioned before, many breweries over the world produced dry beer. This new type flooded the market during the 1990s. Even though beer lovers’ interest has declined over time, there are some regions where dry beer is still an irreplaceable beverage.

The country of origin of dry beer offers several well-known brands. Believe it or not, the invention of dry beer led to the so-called Dry Senso or the Dry War among their large breweries.

Immediately after Asahi Super Dry, Kirin Dry and Kirin Malt Dry beers from competing companies appeared. Then, Sapporo Dry and Suntory Dry 5.5 beers followed. Nowadays, most of these beverages are still produced. You can find some of them in the US, like Kirin Brewery products.

The US and Canada

The US and Canada imported foreign dry beers for years, but their breweries also started to produce this beverage. The most famous US brands that brew dry beers are Budweiser and Anchor Brewing. Their Liberty ale is the first dry dry-hopped beer in the US.

Also Read:  What is an ESB Beer? Everything You Need to Know

Many dry European beers include dry hops, unlike Japanese beers made of different yeast varieties. Examples are the German Holsten Dial Pils, the Vienna-style Lager, and the Irish Dry Stout like Guinness.

These beers generally have a sharp, heavy taste full of bitterness, which some breweries enrich with floral or fruit additives.

Dry beer is a common choice of consumers in Australia and occupies about 15% of the beer market. The most famous brand is Hahn SuperDry, which is known for being 99.99% sugar-free, so it belongs to the extra dry beers.

Besides, this beer has 4.6% ABV and only 99 calories (415 kJ) per serving. Other well-known choices are Carlton Draft, James Boag’s Premium Lager, Victoria Bitter, and Tooheys New.

As I have already mentioned, many laypeople can’t recognize the difference between dry beer and dry-hopped beer. Some dry beers are also dry-hopped, but that is more brewery’s choice than a rule of thumb.

Dry hopping is a process in beer production that has existed for centuries. It implies adding hops to the beer after brewing to improve its flavor. This method is sometimes called cold-hopping because brewers use it after fermentation.

Historically, this process was used as early as the 1600s because it extended the beer shelf life. Brewers added hops to barrels prepared to send overseas to make the beer ready to drink once it arrived at the destination.

In the present day, the first beer with hops added after fermentation was Prototype, by the German brewery Kehrwieder. It introduced this beer style in 2013, but now you can find many local beers produced in this way.

Dry beer doesn’t contain noticeable residual sugar because breweries use different methods for its making. It has an intense flavor you feel immediately. The first dry beer was produced in Japan, but it is a popular beverage worldwide nowadays. 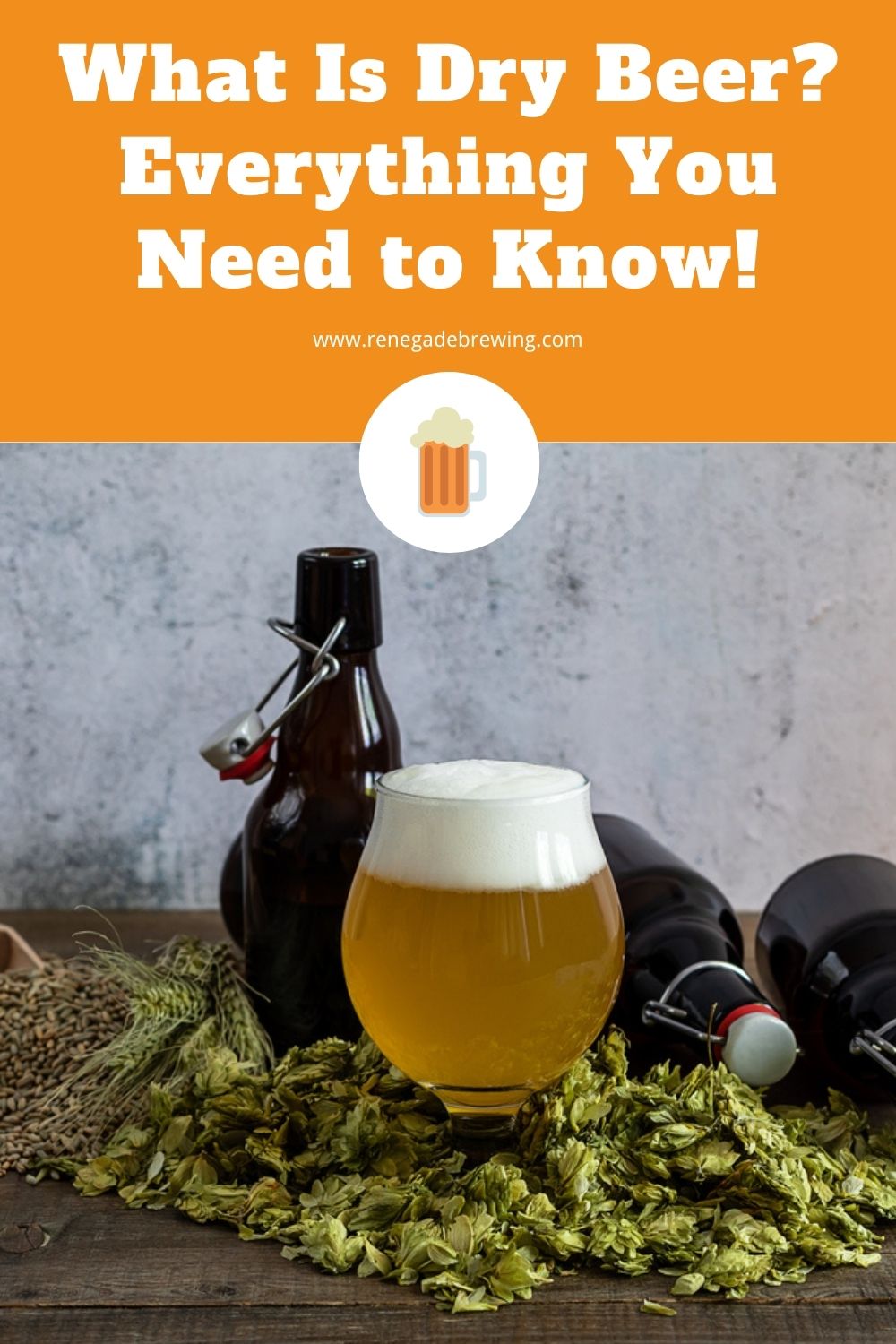