In recent years, food allergies have increased. Or maybe they’re just getting more attention. But while some of us dodge food for weight and lifestyle, some of us could get seriously sick. Just as an example, gluten is toxic to patients with Celiac’s Disease. So whether you’re avoiding bloat or ditching barley bread, here’s a list of the best gluten-free beer around. 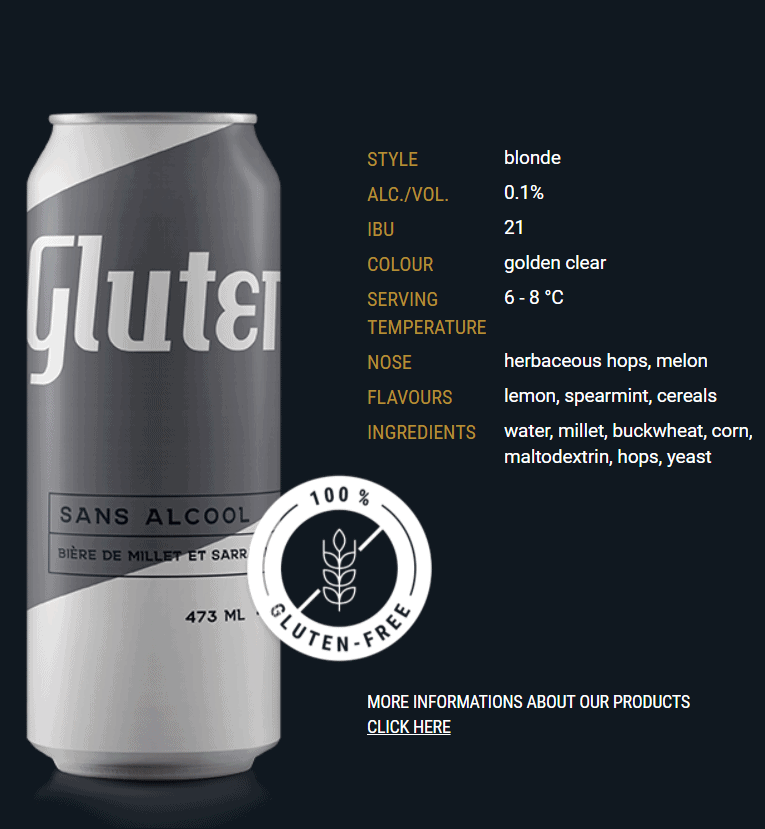 Let’s start in Canada, where the eponymous team at Glutenberg Brewing is based. They’ve mastered the art of gluten-free brewing by replacing typical brewing ingredients. In place of barley, wheat, or rye, Glutenberg uses amaranth, quinoa, millet, corn, and buckwheat. Their primary supplier providing 90% of their ingredients) is the nearby Ferme Sans Gluten.

And their spent grain goes there too so this Quebecoise brewing process is fully green and sustainable. Glutenberg Blonde Ale has an AV of 4.5% and an IBU of 15. It’s a fluffy, lemony drink built off corn, yeast, and Demerara sugar. It has the floral aroma of hops, pears, white pepper, and fennel with a touch of lemon peel. The finish is dry, herbal, and award-winning. 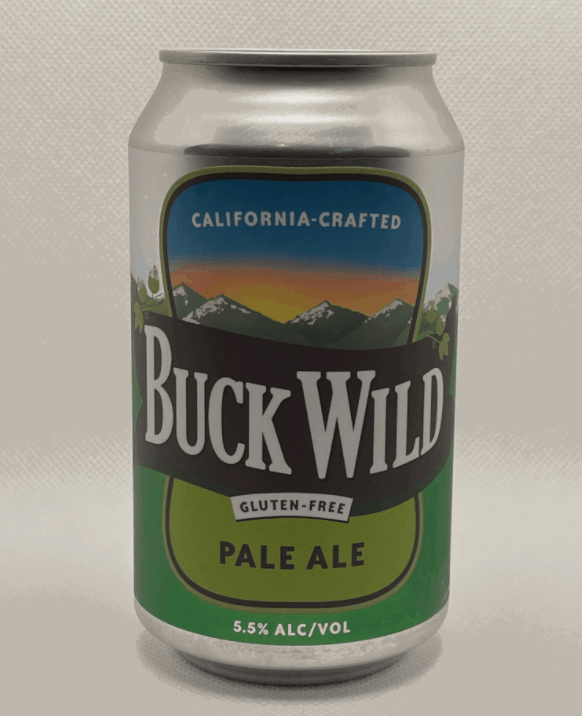 When you look up Buck Wild, you may get puzzled by all the references to Alpenglow Brewing. Don’t panic though – it’s easily demystified. Think of Alpenglow and the mother company and Buck Wild as the teenager that recently joined the anti-gluten gang. Founder Mike Bernstein went gluten-free in 2006 and couldn’t find a beer his gut could tolerate.

So he went and started the first gluten-free brewery in California. This year-round beer has a backdrop of honey and citrus with grassy undertones. Its ABV is 5.5% and its IBU is 48. This hops-forward ale is the brand flagship. It contains rice malt, Cara millet, patented ale yeast from the West Coast, and buckwheat. It also uses Chinook, Centennial, and Amarillo hops.

3. Drink This Or The Bees Die 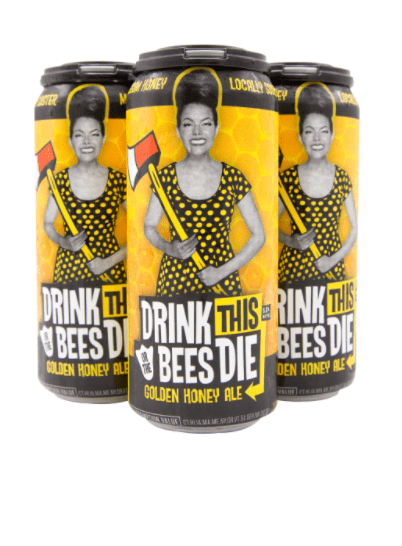 The quirky name already marks this out as a typical craft beer. And like many gluten-free brands, it was born out of necessity. When founder Mark DelVecchio was diagnosed with Celiac’s, he was already a known artisanal brewer so he started experimenting with no-gluten recipes. Like many environmentalists, he knew the bees were dying so he decided to help.

His Duck Foot Beer brand developed this golden honey ale with its sweet scent and dry finish. The award-winning beer has an ABV of 6.9% and an IBU of 15. It’s packaged in cans and part of its profits go directly to the Planet Bee Foundation. The orange blossom honey used to brew this beer is locally supplied from San Diego apiaries. It’s available all year round. 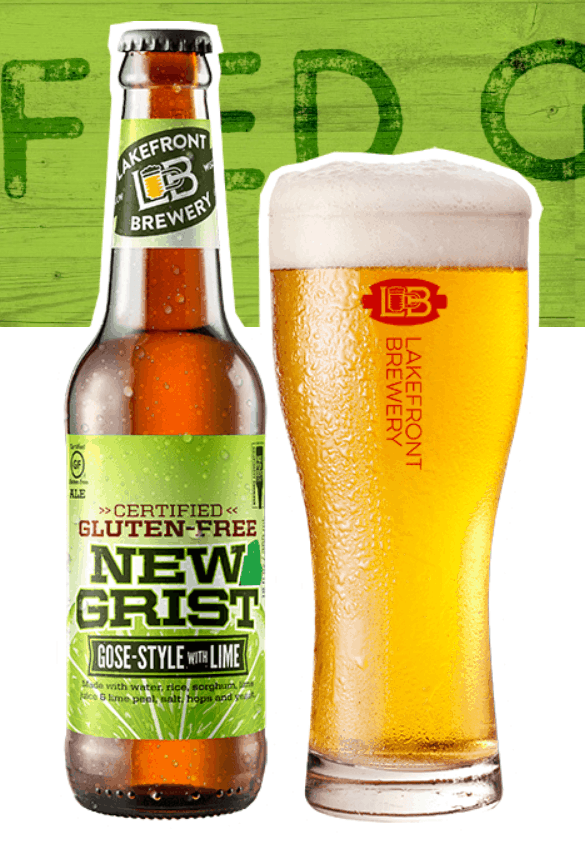 When your body can’t handle gluten and you still want beer, you have several options. You could go for dedicated gluten-free breweries (and yes, there’s an app for that). Or you could opt for regular gluten-free bottles that use non-gluten grains. The least stringent option is gluten-reduced drinks with under 20ppm. This is still safe if you have any gluten allergies.

Also Read:  What Is Dry Beer? Everything You Need to Know!

Gose is a style of top-fermented German beer originally brewed in Goslar and served warm. It was high in salt, herbs, sour lemon, and wheat (about 50%) The rest is a mix of barley and oats. Grist Gose twists the recipe by substituting sorghum and rice extract. These are blended with lime zest, sea-salt, Willamette and Zeus hops to craft an ABV of 5.1% and an IBU of 15. 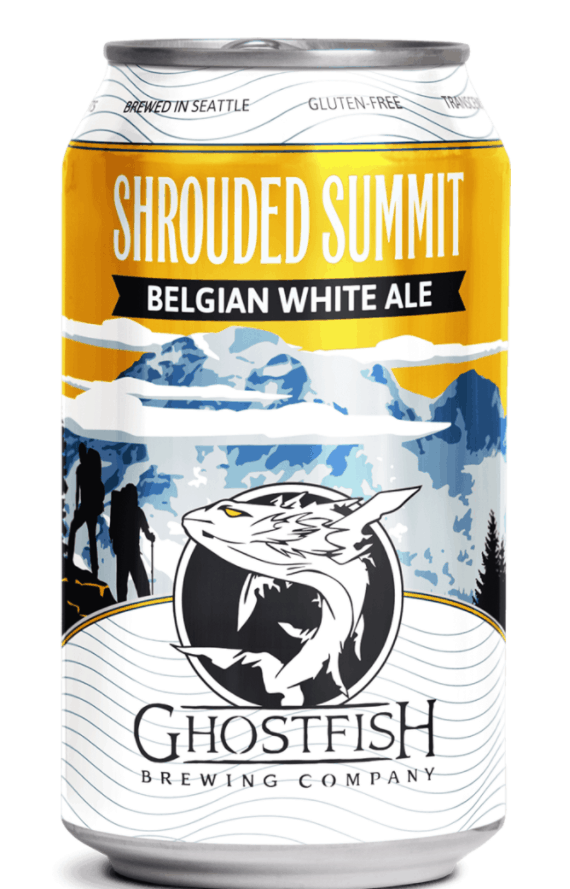 Some people call it witbier. Others call it hefe. But both are brewed with wheat, so they need significant tweaks to make them the best gluten-free beer. Ghostfish Brewing opted for the Belgian Witbier variety, earning three silvers and a gold at global beer awards. Their white ale is hazy, gold-tones, and full-bodied. Plus, they replaced the wheat with malted millet.

The beer also has a base of malted rice and malted buckwheat, all from verified malting companies (Grouse, Eckert, and Skagit Valley respectively). For flavor and aroma, the beer is infused with clove, coriander, banana, juniper berries, yeast, and sweet orange peel. This beer also has floral hops in the updraft finish. It has an ABV of 4.8% and an IBU of 20. 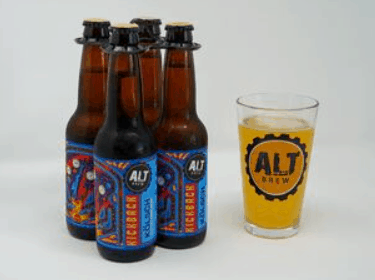 You’ve heard of alt-rock, and maybe even alt-coins. But now it’s time for Alt Brew, a dedicated brewing facility that’s certified 100% gluten-free. So if you’re looking for the best gluten-free beer, it’s probably one of theirs – they have a can or bottle in every category from Saisons and Kolsch to porters and haze. They even brew barrel-aged varieties gluten-free.

But for now, let’s focus on their Double IPA. It has an intoxicating ABV of 8.9% and an IBU of 99. This hops-forward brew includes Citra, Simcoe, Amarillo in the main batch. An extra dose of dry-hopped Amarillo completes the process, giving the beer a citrusy finish. This DIPA is available all year round. It has a satisfyingly malty mouth-feel and aroma. 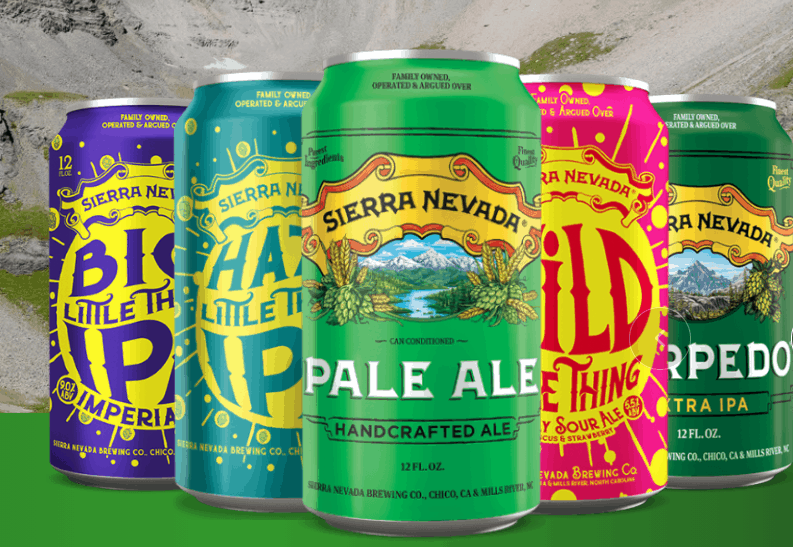 With a name like that, you’re practically begging for a hangover. But at least you won’t trigger your internal anti-gluten brigade. The brewery had a harsh 2020 (worse than many of us) and have taken a break from brewing, announcing they’ll have no new releases for 2021. But if you can find an old bottle of Flyby, you can still order a mug at many Sierra Nevada taprooms.

At 5ppm, Sufferfest positions itself as the best gluten-free beer for athletes. The beer is high in flavor but low in calories. The 5.1% pilsner has an IBU of 30 and has won several beer awards. It’s brewed with Saaz Hops and is technically a gluten-reduced beer, so heads up. Flyby has a palate that’s all spice, flowers, and herbs with raw barley and basil undertones. 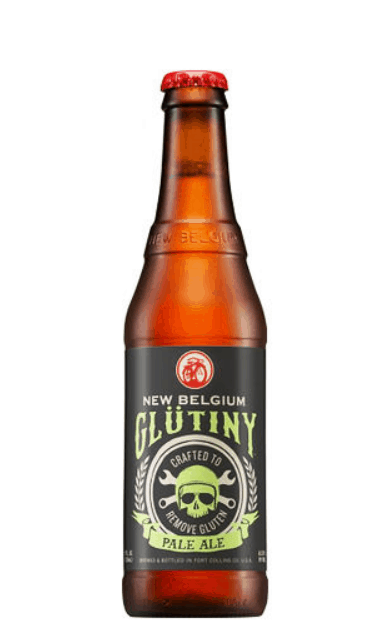 In the 17th Century, New York State was part of Nova Belgica aka New Belgium. It had climate and brewing conditions similar to Europe so many settlers picked it as the ideal spot for their breweries. A lot of hops plantations developed in the area to meet local demand. But New Belgium Brewing is based in Fort Collins, Colorado, far from the grains of New York.

It was started by tutu-toting founders Jeff Lebesch and Kin Jordan. They were inspired by their 1988 Belgian bike tour and started brewing in their basement three years later. Glutiny was released in 2016 so it’s hard finding a bottle today. Their barley-based pale (ABV 6%) and golden ale (ABV 5.2%) both have a hoppy orange gluten-reduced formula that’s filling. 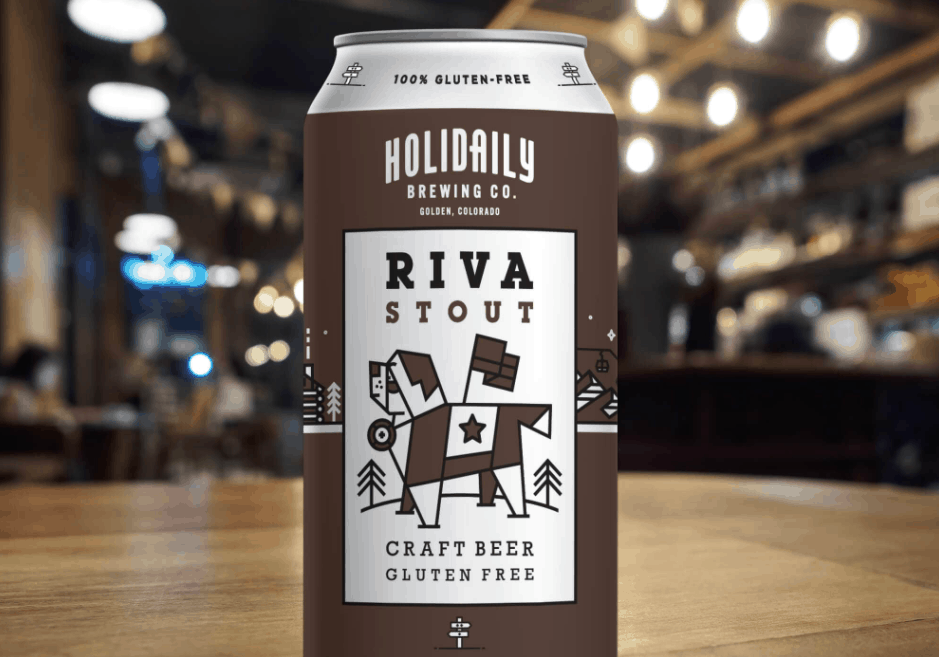 They say go big or go home, so when Holidaily launched a gluten-free brand, they ensure their beers were vegan as well (except their honey ale, because bees). Let’s focus on their darkest drink. Riva Stout eternally celebrates Riva, a Bernese rescue dog that was named after Riva Ridge. It’s a popular ski spot, and this is a lovely warming beer for chilly weather.

This full-bodied beer has an IBU of 30 and an ABV of 6.5%. It builds off malts from millet and buckwheat mashed with licorice, dark chocolate, and coffee. The blend of hops includes Willamette. It has a thin head, no lacing, and a rich earthy aroma. The palate is creamy and the over-arching flavors are bitter dark chocolate and roasted coffee. No caffeine though. 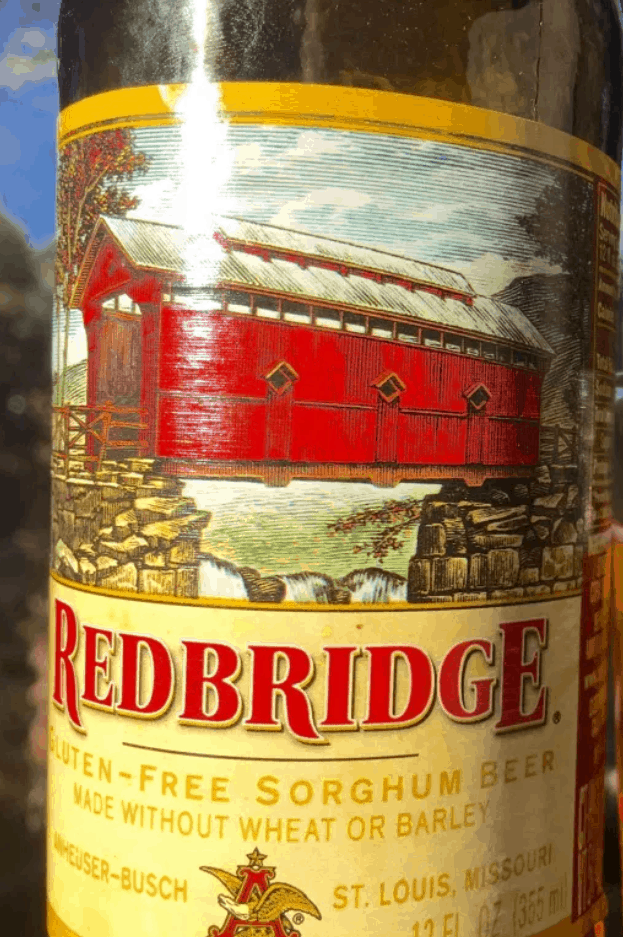 AB-InBev seems to own every global beer brand that matters. So of course they have the best gluten-free beer. It’s brewed with sorghum and has a solid distribution network so you can buy it anywhere. The beer has an ABV of 4.8% and is hopped with Hallertau and Cascade. Redbridge bottles first popped open in 2006 and have a rich amber hue and hardly any head.

It’s a light, fizzy beer with no lacing but its mouthfeel is surprisingly full-bodied. And its palate is slightly sweet and malty, so it feels more like an American ale than a lager. The beer has fruity, grainy notes with toast-like hints in the background. It pairs well with pork and hard cheese. It mildly echoes cider, with its distant corn undertones and sour fruit feel. 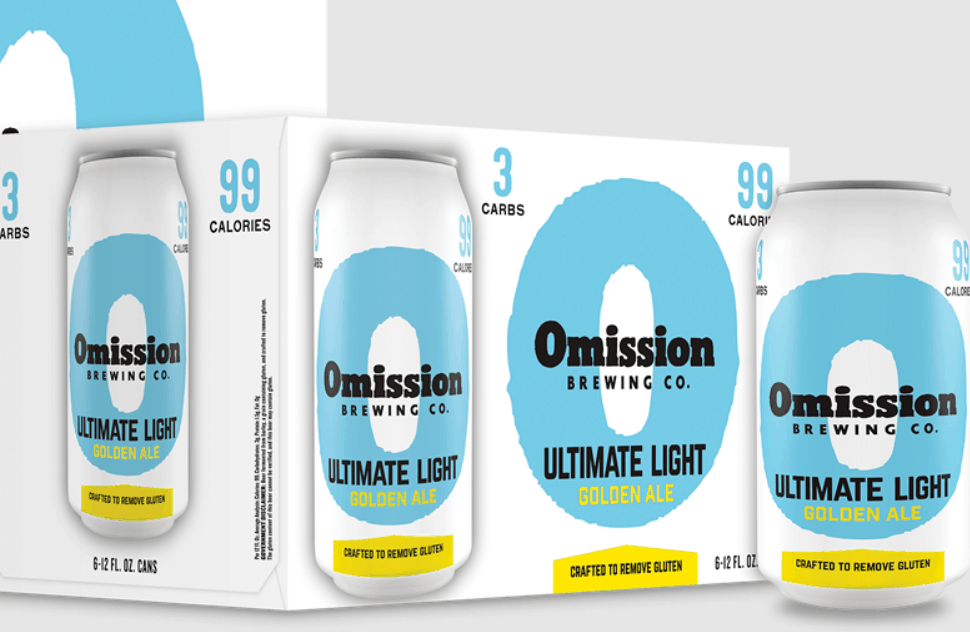 A lot of gluten-free beers are light. This offers extra digestive relief for drinkers dodging gluten-intolerance. And that psychological boost may help you love your beer even more. So you could try this light drink to omit gluten symptoms, pun intended. And it doesn’t just leave out the gluten – at 99 calories and 3g carbs, it leaves out the fatteners too!

But … as it says on the can … it’s not dedicated. Instead, it’s ‘crafted to remove gluten’ so it may still have trace elements. It’s a fairly young drink, launched in 2017. And its clean finish follows citrusy hops of – well – Citra. But also Millennial and Galaxy. The beer has a malted barley mix that includes (reduced) 2-row and caramel. Its ABV is 4.2% and the IBU is 10. 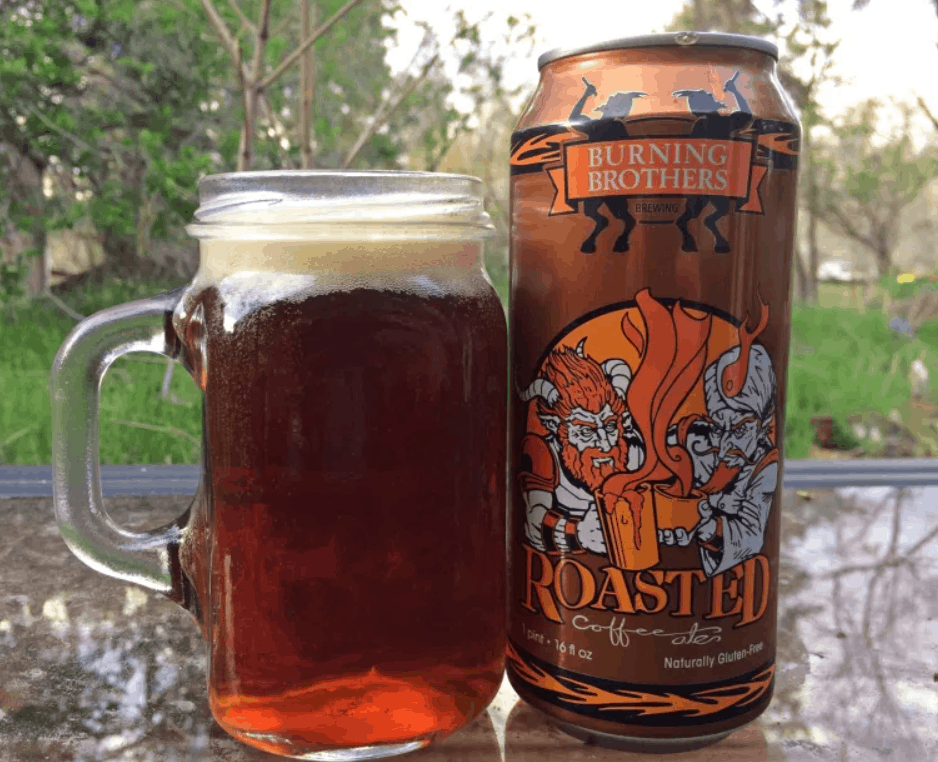 No, the Burning Brothers have no relation to Burning Man but were both circus fire-eaters in their teens. So when Dane Breimhorst got Celiac’s, Thom Foss took up the challenge. Together, they developed Roasted Coffee Ale with an ABV of 7.5% and an IBU of 26. It’s the perfect blend of bitter and sweet thanks to its base of cold-brew coffee and single-hopped ale.

Also Read:  What Is Nitro Beer? Everything You Need to Know

The brew won bronze at a craft beer context. And that’s third overall when pitted against gluten-filled beer so the quality isn’t in question. This reddish-brown beer has lots of long-lasting head and lace. It’s creamy and frothy with bitter coffee aromatics and some sweetness mixed in. It’s a smooth drink with nutty notes in the foreground and a little toffee in the rear. 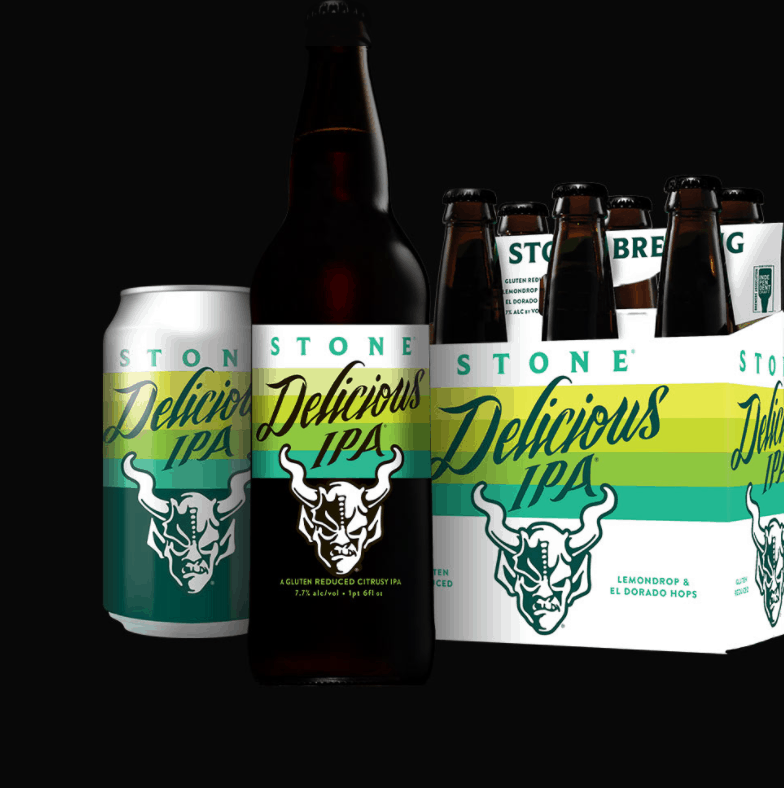 Yes, DIPA generally stands for ‘double’ IPA, not ‘delicious’ IPA. But Atone Brewing has amassed a reputation as America’s favorite IPA so they can’t not have a gluten-free version. They settled for a gluten-reduced variant though. And they started this ‘reduction’ at the source. They hop with El Dorado and grassy citrus Lemondrop to balance out the gliadin.

Other hops in the mix include Calypso and Nugget. Delicious IPA has an ABV of 7.7% and an IBU of 75. The lemon leaning is more lemonade-slash-lemon candy than sour-tequila-chaser. And this citrus-forward drink is sweet and vegan with a dry, bitter finish. The gold-colored drink has a good head and the spicy herbal aroma of lightly toasted malt and lemongrass. 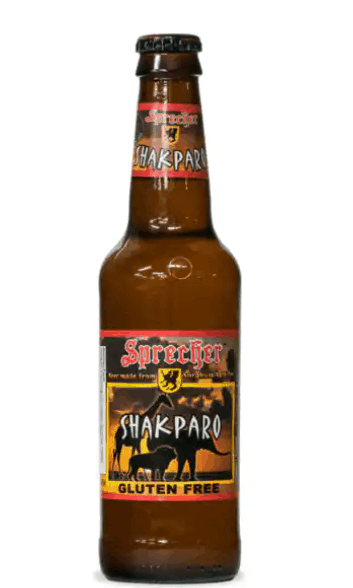 In Japan, they brew beer from rice and call it sake. In Africa, fermented grains form a base for both porridge and booze. And Shakparo is the bottled example of this indigenous tradition. Crafted in Wisconsin, this gluten-reduced beer follows the West5 African tradition of sorghum and millet beer. Its fruity flavor has some drinkers placing it in the Saison aisle.

Shakparo has an ABV of 5.7% and has cider-like leanings, with its spicy unfiltered profile and its crisp, fructose finish. The aftertaste is dry and vinous so this ‘red ale’ feels a lot like drinking red wine. It’s a fire-brewed drink ‘boiled’ in kettles. It has minimal head, spotty lacing, and a ‘thin’ mouth-feel. Since it’s not filtered, it has a slightly cloudy quality. 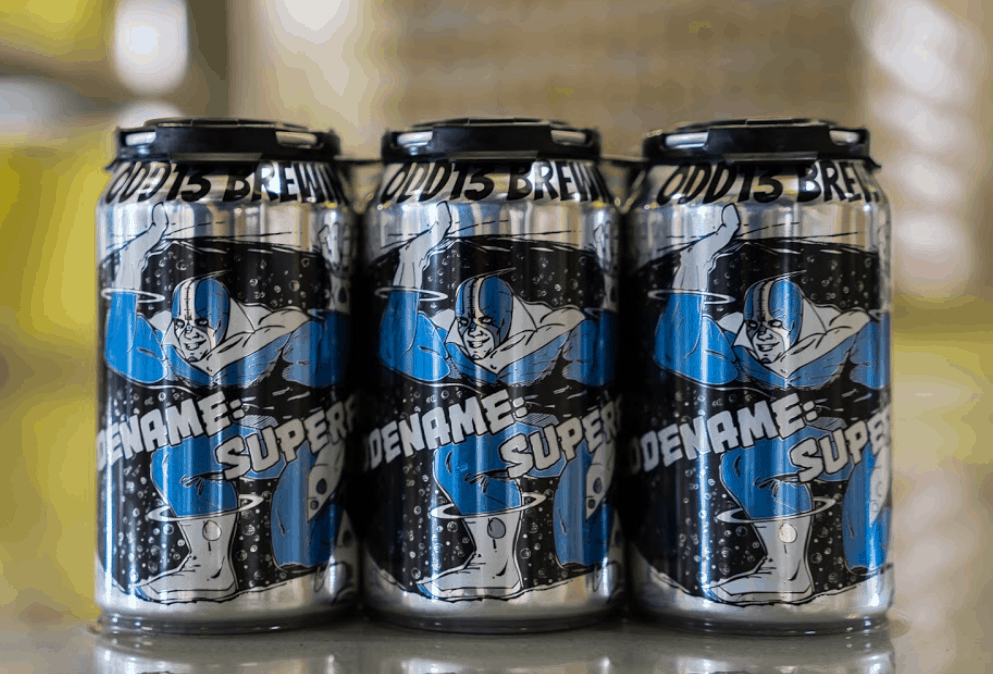 The best gluten-free beer is brewed by the anti-gluten gang. Because they specifically developed it to meet their dietary needs. So you know you’re not sipping anything they wouldn’t serve themselves. This is crucial in gluten-reduced space. Odd13 Brewing sits snug because Ryan Scott is gluten-sensitive. It’s why they created Codename: Superfan.

Like all their other beers, this hazy IPA is gluten-reduced to a level that doesn’t trigger his sensitivity. Its barley malts include Rahr 2-row, Weyerman Caraform, and flaked wheat, all treated to push gluten levels below 20ppm. And that distinct juice-bomb flavor comes from Citra, Equinox, Simcoe, and Amarillo hops. This low-gluten delight is available year-round.

Have you tried any of these gluten-free beers? Tell us how you liked it in the comments!