Middle school kids get root beer and underage soldiers take near beer. But what if you like that rooty taste and you want a bit of a buzz? Hard root beer gives you the best of both. It’s not as simple as adding a little vodka though. You want to buy the right alcoholic root beer.

You need someone who knows what they’re doing. They have to blend the root with booze without diluting the flavor or mismatching the alcohol. Many hard root beers are made by large commercial breweries (rather than artisanal brewers.) So let’s explore a few top brands. 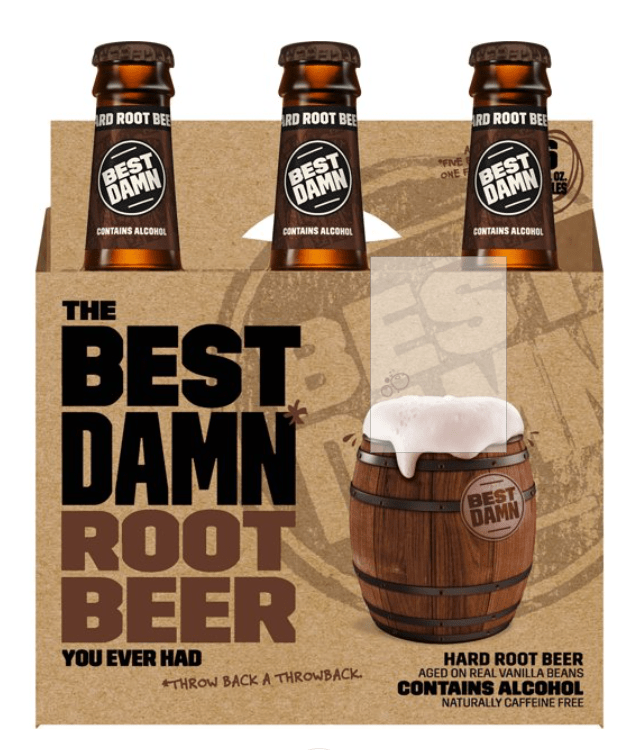 Capitalism is tricky. Especially when it comes to mergers, acquisitions, and take-overs. In this case, we’re thinking of Anheuser-Busch, the biggest brewery in the world. They often absorb smaller artisanals and spread their reach that way. Then there’s Budweiser, America’s Beer. Somehow, AB-InBev + Budweiser = Best Damn Brewing, a microbrewer with a dead website.

Whatever its provenance, Best Damn Root Beer is beloved by many and available at Walmart. It has an ABV of 5.5% and like many alcoholic root beers, it’s a sweet beer. Flavored with vanilla beans, anise, wintergreen, black licorice, and birch root. The beer is low on fizz so the ‘cloying sweetness like liquefied root beer candy.’ It can be overwhelming.

2. Not Your Father’s Root Beer 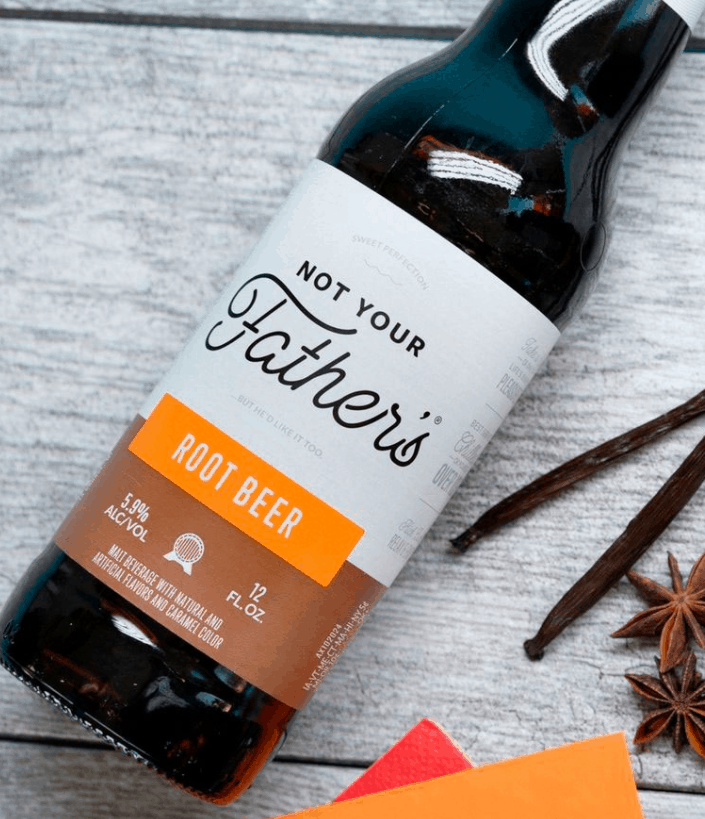 This is one of the most popular alcoholic root beers on the market. But the haters describe it as ‘sickly sweet’ so you do need a sweet tooth to fully appreciate it. Not Your Father’s (NYF) is a subsidiary of Small Town Brewing and Pabst. The NYF series features sweet, flavored malt drinks in vanilla, lemon, and root. Their root beer has an ABV of 5.9% and an IBU of 10.

The beer uses vanilla, anise, sasparilla, clove, and caramel. It tastes a lot like regular root beer so you might forget you’re drinking alco-pop. But it’s not as fizzy as other hard sodas though. It has a silky texture and can be quite filling. It’s described as herbal, vegetable beer. There’s allegedly a rare batch that 19.5% ABV so try that version too … if you can find it. 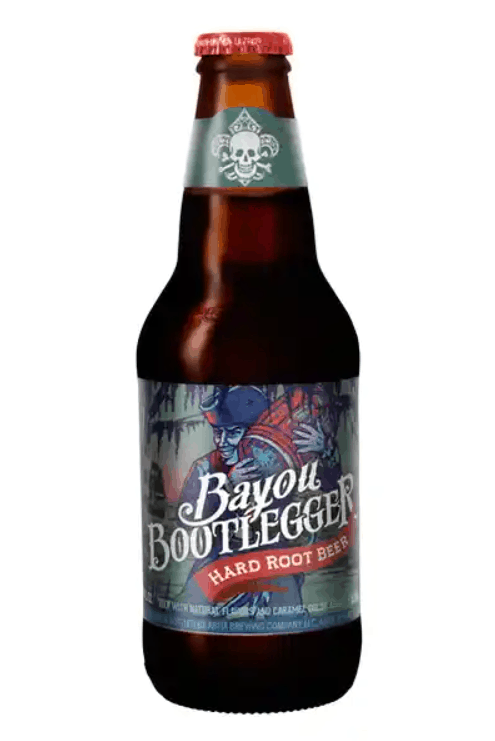 Forget moonshine … what you want is bootleg from the bayou! The name alone is enough to grab you. But it offers so much more than a quirky label. This bottle of hard soda has an ABV of 5.9% and is extremely sweet. That syrupy aftertaste puts people off, so you need a super sugary palate to keep this drink down. But because it’s from the bayou, it pairs well with chili.

And the beer is gluten-free to boot! Bayou Bootlegger is sweetened with Louisiana cane sugar and spiced with vanilla, clove, wintergreen, sassafras, and anise. The brewery (Abita) was founded in 1986 and is independently owned by local shareholders. It’s fully bayou, born and bred. Plus they practice green brewing, protecting the forest and waterways around them. 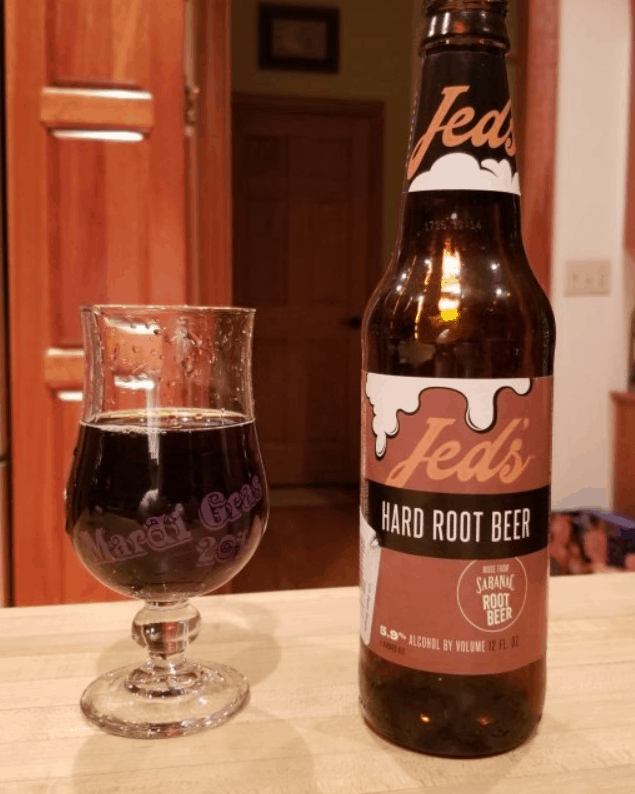 If you go looking for this drink, you may find yourself confused. It’s brewed by FX Matt’s Brewing … which is now called Saranac. Also, they introduced the beer in 2015. It was big deal then but you may struggle to find a bottle now. It was part of their Jed’s line-up, a series of hard sodas that currently includes canned, flavored, Mule Kicker cocktails (ginger + lime).

Still, if you can find their hard root beer, it’s worth a sip. This alco-pop has an ABV of 5.9% and is brewed with birch oil, vanilla extract, anise, and licorice, and has an ABV of 5.9%. It was launched with their orange cream and black cherry creams, following the tradition of Saranac 1888 – their award-winning root beer. And it took them 43 tries to get it right! 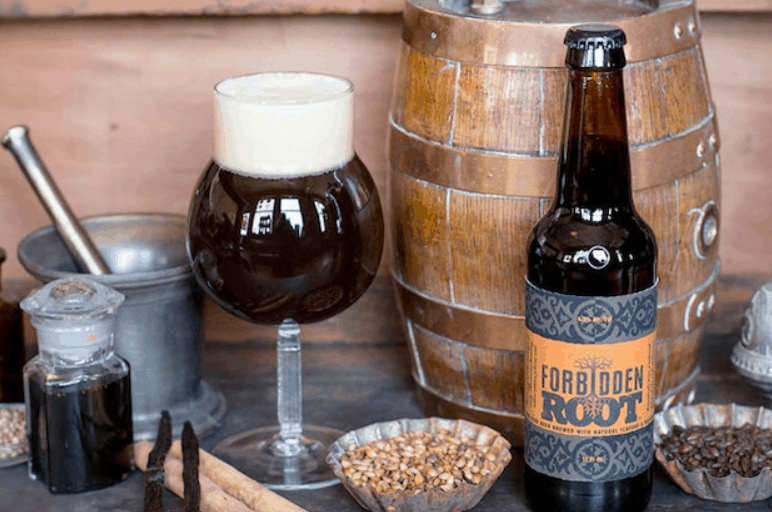 It’s early 2021 as we’re writing … and shopping for beer is a little tricky right now. The pandemic has slowed production and many breweries are restricted to curbside collection and delivery. Plus lots of factories, distribution sites, and even supply farms are stalled. So you if the beer you love is out of stock, you can’t be sure when (or if) you’ll find it.

That may be Forbidden Root has no alco-pop on their website. But you can still buy the 5.2% regular version. Or even their extra root (6.5%). Both versions have a better balance of sweet to root. They’re friendlier to non-sugar lovers and won’t feel as syrupy as some of the others. This herb beer is brewed with cocoa, molasses, and a whopping EIGHTEEN spices. 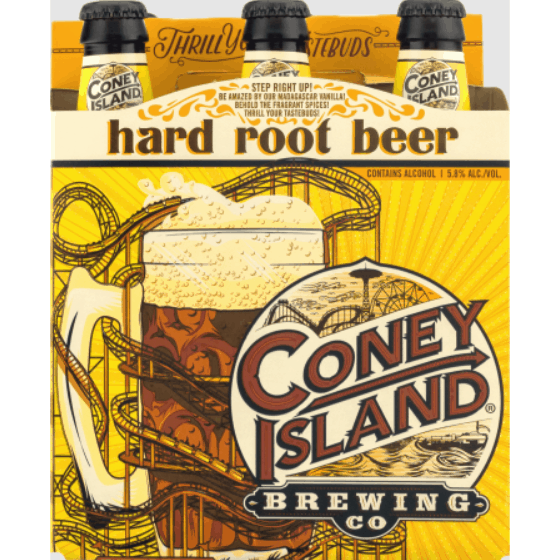 Even for the uninitiated, the Coney Island Ferry is a familiar TV staple. And this old Alco-pop from Coney Island Brewing is a big favorite. It’s hard to find during quarantine times, but you can probably find some at Walmart or Totally Wine. You may have to drive by a few branches and check-in person though – online supplies are drained. And wear your mask!

What’s so special about this hard root beer, does it warrant the effort of finding a bottle? A lot of its allure is pure nostalgia. The hard soda has an ABV of 5.8%. Its herbal infusions include sassafras, vanilla, birch root, and licorice. It’s so well balanced it feels like real root beer. You can barely taste the alcohol but you can still enjoy the buzz. And no boozy smell! 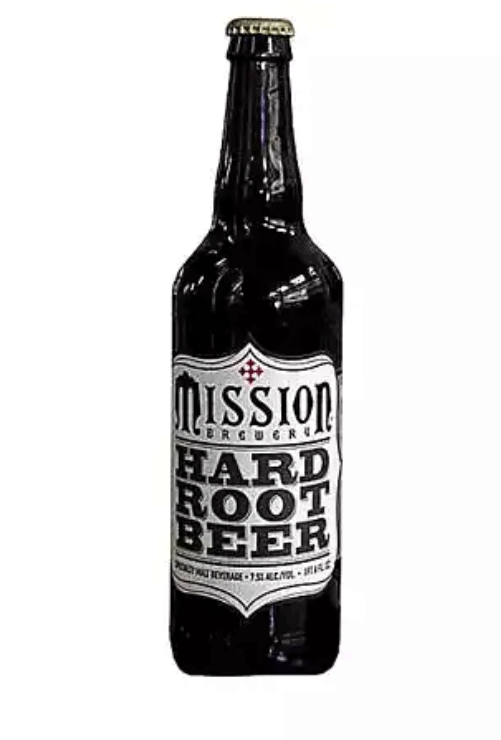 When a craft beer is out of stock, it may mean it’s so popular that it sells out in minutes. Or it could mean freight has slowed, messing the distribution chain. It might also mean the brewery has discontinued the drink. The hard root beer from Mission Brewery is unlikely to stop though. The beer has won a couple of gold medals (2015 and 2017). The fans love it too.

Many alcoholic root beers are cloying and syrupy, with a tinny aftertaste and boozy breath. Mission Brewery solves that. Their beer has an ABV of 7.5% and is brewed with the usual sarsaparilla and vanilla. Despite its respectable volume, you can barely taste or smell the alcohol in this drink. So you won’t have to disguise it with mints … but hide it from the kids! 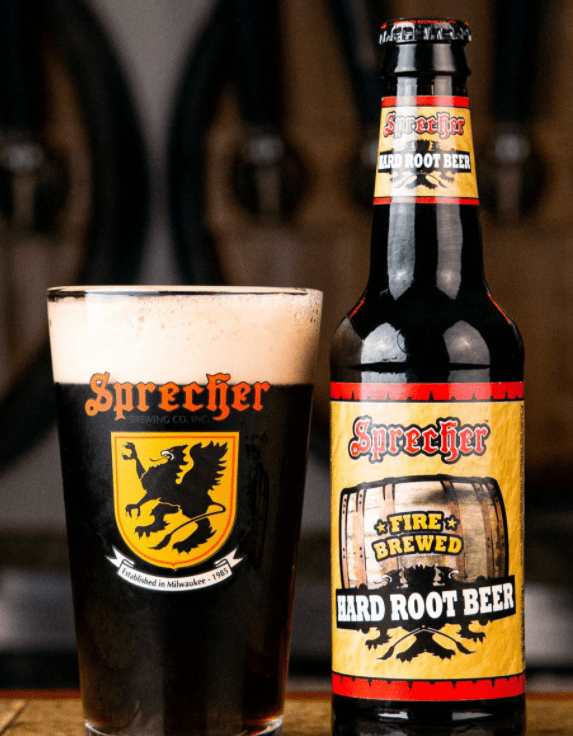 If you’re drinking adult root beer, it’s probably because you enjoy ‘kiddie root beer’. So you want your booze to stay true to its … roots … pun intended. But whether you’re in it for the sugar or just following the crowd, Sprecher is a top selection. Its noticeable ABV is 5%.

But it’s fermented in bourbon barrels so it has some maturity (pun still intended) and kick. The residual bourbon particulates give this hard root beer added character and style. This beer is best drunk at about 45F. The beer won gold in 2016 and silver in 2017.

Drink it neat, mix it into cocktails, cook it in boozy recipes, or use it as a base to a root beer float. Incidentally, Sprecher was the first craft brewer in Milwaukee. And their flagship was the first adult root beer in the US. It’s brewed in a kettle over live flames (hence fire-brewed). 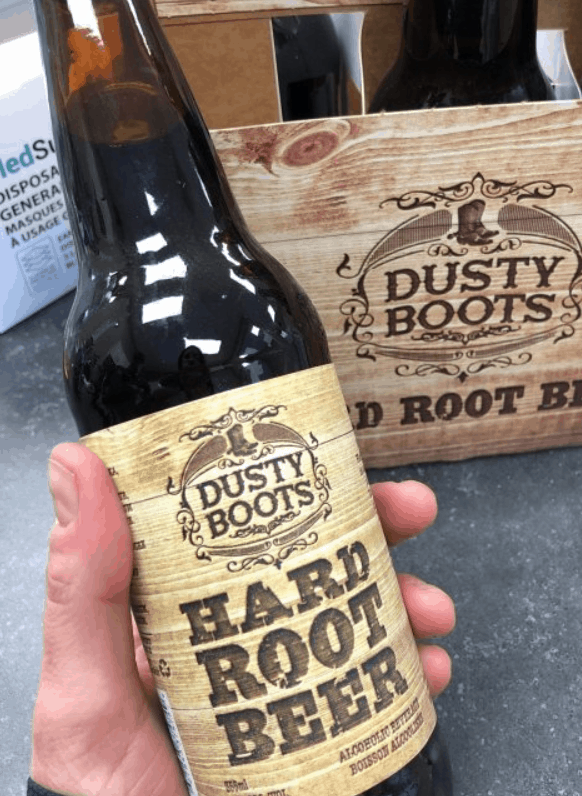 Drinkers who find hard root beer overly sweet might not be fans of the more kosher version. Also, they’re probably looking for a standard steam-brewed beer. Over in Canada, maple syrup, mounties, and moose are in, aye? But they’re dabbling in hard root beer as well.

Dusty Boot is the first Canadian brewer to experiment with this adultified drink. Their version of the boozy beverage has an ABV of 5.9%. Its flavor is so sweet and authentic you can barely tell it’s booze. The secret here is usually slow caramelization for extra silkiness. Its flavor profile includes traditional ingredients like cola, allspice, and vanilla on a vodka base. 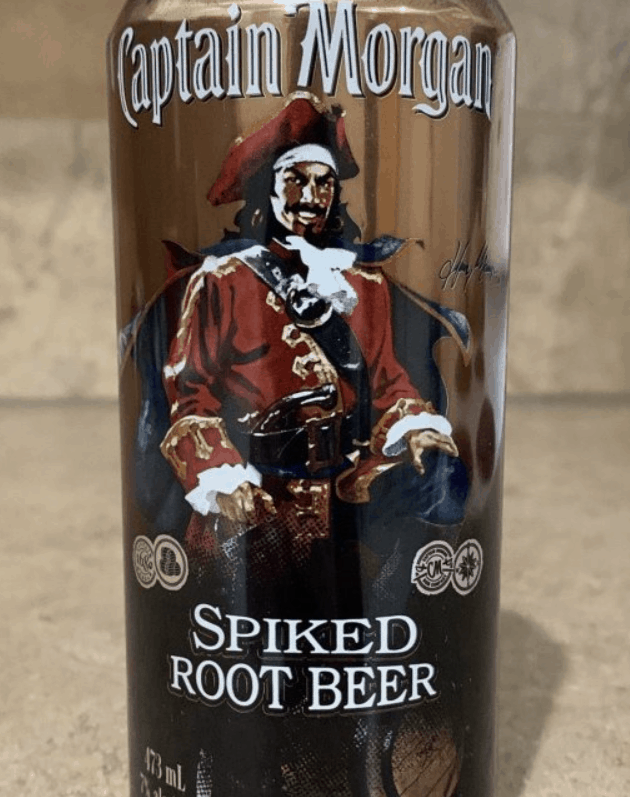 ♫ Yo ho ho and a bottle of r-oot beer?!? ♫ We’re not sure how you feel about the cheeky captain posing on a potentially kiddie drink. But that’s probably why you shouldn’t let the kids drink ‘your root beer’ unsupervised. Captain Morgan SRB has an ABV of 7% and tastes like ‘soda pop and rum’. The fructose aroma of this drink will remind you of cough syrup.

Radar and Special K are undecided. Its color is lighter than cola and its flavor is sweeter than standard root beer (the rum brings out the sugar). It tastes a lot like liquified barrel candy and has zero alcohol in its nasals. The scent is raw root beer 100%. But you can feel the booze on your palate. The downside is it’s low on fizz so there’s no head or lace in it. Flat. 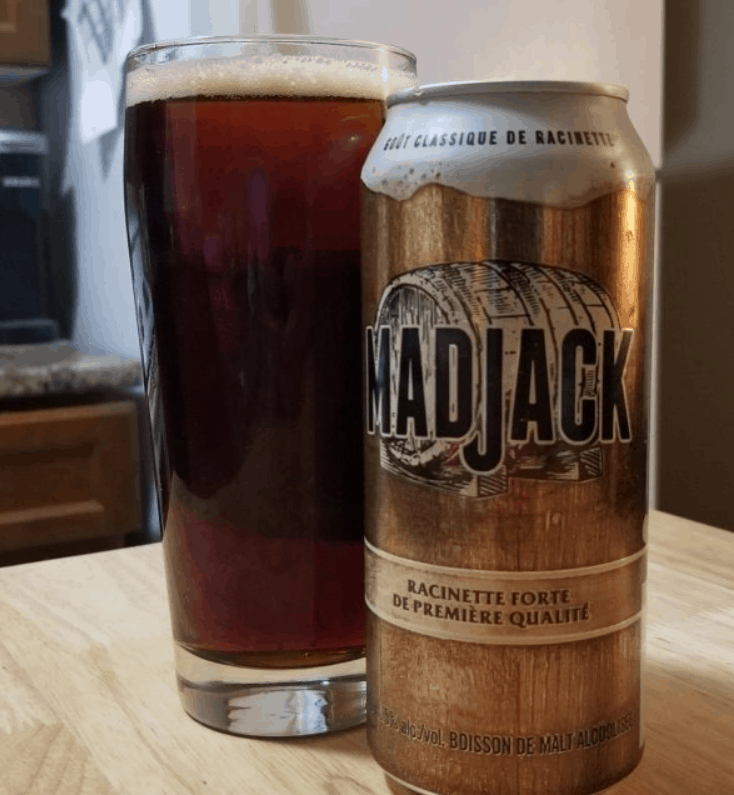 Canadians said ‘hell yeah‘ when they heard this beer was coming to town? More likely, they murmured ‘that’s nice’. Because they only swear in French. And when they do, it’s so benign that even original French-speakers don’t comprehend their intent. But let’s get back to beer.

Mad Jack has an ABV of 5%. It’s brewed by Molson Coors Canada and has a strong vanilla base. This beer isn’t as flat as SRB – at least not immediately. You’ll get an inch or two of head but it fades fast and leaves no lace. The beer has more of a soda-bubble fizz.

Its mouth-feel is prickly at the start (like soda) but then it flows into a sweet savor with a sugary aftertaste. The vanilla aroma feels cheap and synthetic. Carbonation is low and you may feel a hint of caramel, sassafrass, cinnamon, clove, and other sweet spices. 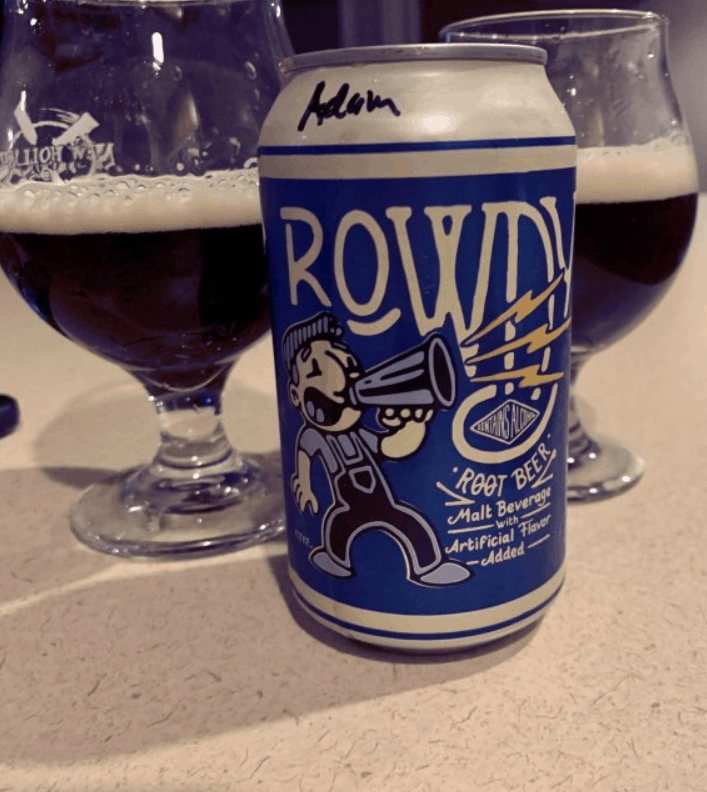 It sure doesn’t look like one. Or sound like it either. But root beer is a soft drink. So adding booze makes it adult/hard/spiked or … rowdy. This well-named brew has an AV of 6.6%. Brands that already have popular root beers have a head start. These include Sprecher and Forbidden Root. Berghoff – on the other hand – started from scratch. They needed ideas.

They resorted to sweetening a dry porter with cane sugar. It took fifteen tries to secure its flavor. And the effort was a collaboration between Berghoff and North Western Extract. The ‘winner’ is a smooth, creamy drink with a malty base. It will tickle your nose with notes of anise and sassafrass. Texture-wise, it’s thinner than Coney Island but is sweet like NYF. 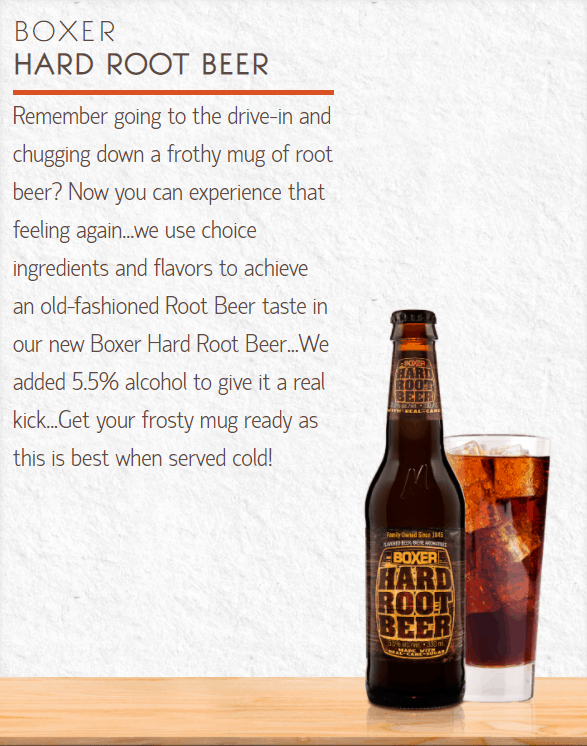 Many forms of alcohol get better with age. That’s why collectors have cellars and sellers emphasize vintage. Minhas Brewing has been around for centuries – it started in 1845. And during the prohibition years, they diversified into soda pop. So when the booze ban was lifted, they could play again. And now they’ve added root beer to their retinue of hard soda.

Despite its aggressive name, Boxer won’t knock you out. It’s a 5% alco-pop brewed with 2-Row malt barley, sweetened with cane sugar, and spiced with vanilla, cinnamon, molasses, and nutmeg. The ‘root’ flavors in the beer include aromatic anise, licorice, and fennel.

The beer is sufficiently frothy with a good inch of head. It convincingly mimics root beer and all those spices and sugars hide the boozy scent. Between that and the sugar high, you may end up drinking more than planned. 5% isn’t much … but 5% x 5 bottles … do keep count!

The Root of the Matter

Ideally, alcoholic root beer should smell and taste like root beer. Because the assumption is you’re … rooting for it to remind you of your favorite soft drink. And if you’re the type that slips a little tipple in your soda or juice, then hard root beer is ideal. Look for a beer with a subtle or concealed scent, a sweet profile, decent carbonation, thick head, and wispy lace.

Which of these alcoholic root beers have you sampled? Have you tried any others that impressed you more than this lot? Tell us about it in the comments – we’d love a sip!