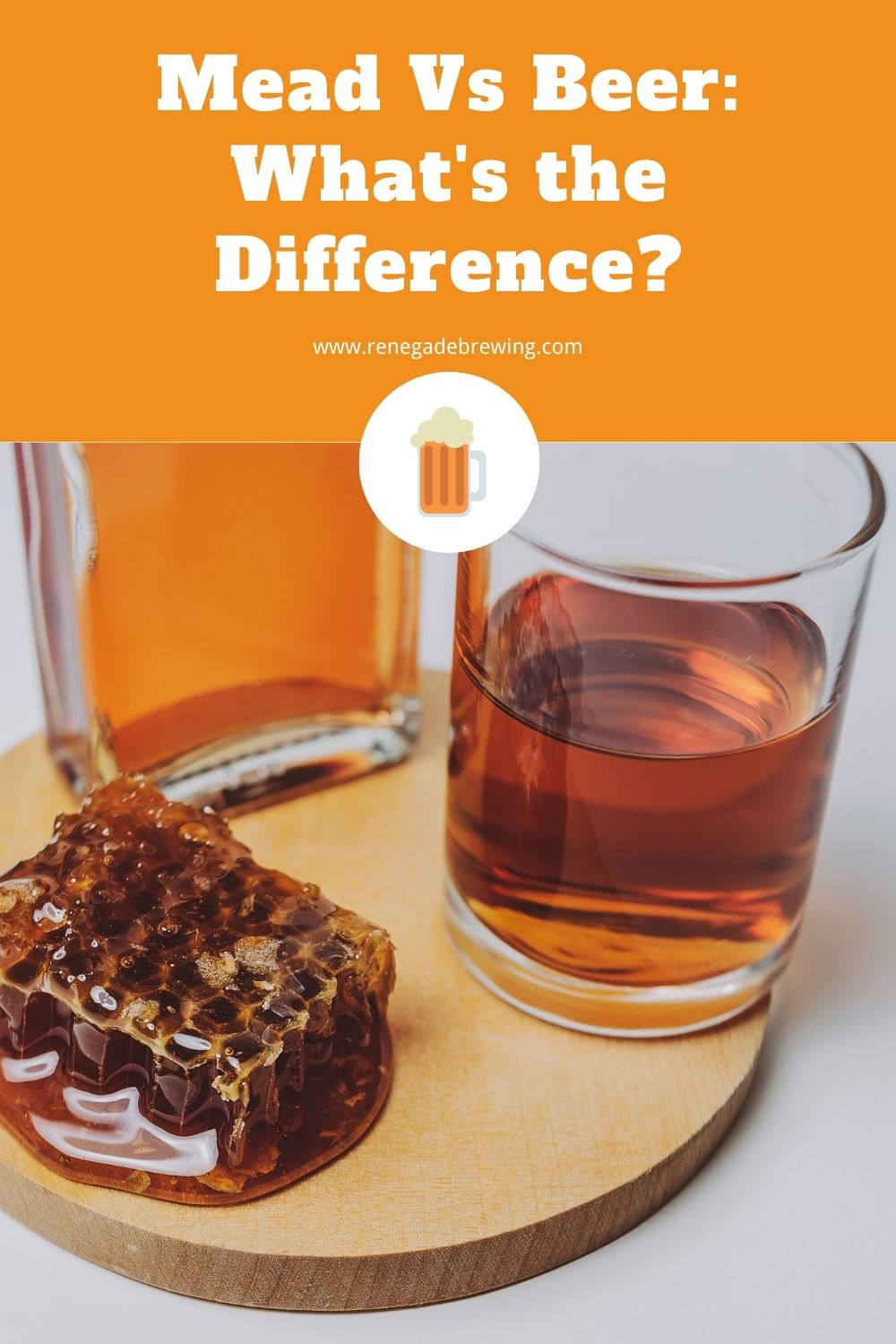 In recent years, mead has made a comeback and people are asking what’s the difference between mead and beer? Is mead the same as wine? Well, there are similarities and differences between these alcoholic drinks and in this article, we get into all the details of mead vs beer that you need to know.

When you encounter mead for the first time, it will feel a lot like wine but it will also have some characteristics of beer. Unsurprisingly, mead is referred to as honey-wine but it is neither wine nor beer—it is a drink that exists in a class of its own.

To understand the difference between mead and beer, you would first have to look at how each type of drink is made.

Brewers use four ingredients to make beer: Barley, water, yeast, and hops. The process entails extracting sugars from barley and introducing yeast, which converts the sugars into alcohol and carbon dioxide.

Then, the processed grains are soaked in hot water to activate the enzymes in the barley and to bring out the sugars. This is known as mashing. After the grains are fully soaked, the water is drained out. This water is known as wort and is essentially raw beer packed with sugar.

Next, the wort is boiled and other ingredients such as hops, flavors, and spices are poured in. Hops are cone-like fruit from the vine plant. They balance the sweetness of malt and give beer its distinctive bitter taste.

The wort is left to cool after which it is filtered then fermented by adding a specific type of yeast to the liquid. The mixture is fermented for a few days or weeks before it is bottled ready to be distributed to the market.

How Is Mead Made?

Now, let’s take a look at the process of making mead. The main ingredients here are just water, honey, and yeast.

The mead-making process starts with thinning the honey with water to make it easier for the yeast to break down the sugars into alcohol.

The diluted honey is known as ‘must.’ Some mead makers heat the must to get rid of harmful bacteria. But generally, most skip this stage because they believe it takes away from the potency of honey.

After the dilution phase, it is common to throw in fruit and fruit juices and vegetables too to give the must a customized taste. The next step is fermentation where yeast, oxygen, and extra nutrients are added to the must.

After fermentation, the mead is left to age for a couple of months or several years before it goes to the market.

Mead and beer are made from the fermentation of sugar. But this is as far as their similarities go. These two types of drinks are made from vastly different ingredients. While mead is made from a simple mixture of water and honey, and of course addition of yeast, beer requires not just water but also grain and balancing hops.

Mead Vs Beer – Types and Classifications 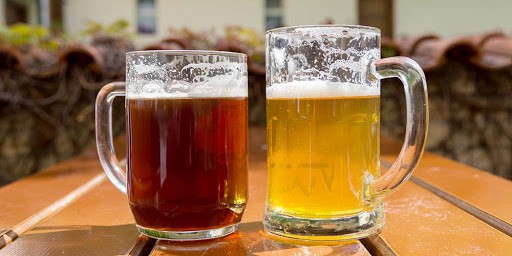 There are many types of beers but they all fall under the broad categories of ale or lager. Ale beers are made using a different type of yeast from the one that is used to make lager beers.

To make ale, brewers use the saccharomyces cerevisiae yeast. During fermentation, this yeast floats to the top of the fermentation vessel, giving ales the name top-fermented beer. Ales are manufactured at warmer temperatures.

Lagers, on the other hand, are made using the saccharomyces pastorianus yeast, which is tolerant of cooler temperatures. This yeast is a bottom-fermenting type as it settles at the bottom of the vessel during fermentation.

Larger are often crisp and clean while ales tend toward a fruity and aromatic flavor. Pale ale, Indian pale ale, stout, and gose are all styles of ale beer. Popular lager styles include pilsners, Mexican lagers, and Helles just to mention a few.

The first distinction between the various types of meads is the ingredients they contain. Meads that contain fruits are known as melomels.

Meadmakers toss in all kinds of fruit including berries, pineapples, apples, and more. As you might guess, these meads have a deep fruity flavor that sets them apart.

The opposite of melomels is traditional meads, which do not contain additional ingredients beyond the basic honey, water, and yeast. These types of meads are big on highlighting the flavor and variety of the honey used to make the drink.

The alcohol content is another factor used in the classification of mead. The particular styles here are hydromel, standard, and sack. Hydromels have the lowest alcohol content, usually in the range of 3-7%, and are great for beginners who are stepping into the world of beer.

Standard meads resemble wines and have a higher alcohol content than hydromels, typically 8-13%. Sack meads have the highest alcohol content and contain high amounts of honey that the yeast can convert to alcohol. Sacks have an intense flavor that is comparable to that of red wines.

Although beer and mead are fermented brews, they taste very different from each other. Both have as many flavors as there are mead and beer styles.

Mead tends toward fruity wine flavors with undertones of cider. The honey used plays a big role in the overall flavor of the mead you drink. Also, the type of pollen and nectar that a bee consumes will play into the flavor of your mead drink.

Mead can be sweet, dry, or anything in between. If you are new to this type of drink, a good rule of thumb is to start with a familiar spice or fruit flavor. For example, if you like cinnamon or apples, you might start with cinnamon-flavored or apple-flavored mead. From there, you can experiment with different flavors.

Beer has an equally diverse range of flavors. Mead tends toward fruity, winey tastes but beer, whether ale or lager, offers more malty notes. In terms of flavor, beer can be described as being crisp, hoppy, malt, or roast.

Beers with a crisp flavor are typically light on the palate with a fruity or spicy profile. Pilsners, wheat ales, and amber lagers are good examples of such beers.

If you are after a bitter but aromatic beer, common choices include Indian Pale Ale and Pale Ale. These offer a hoppy flavor derived from the large number of hops added during the brewing process.

Malty beers are slightly sweet with a hint of familiar flavors such as nuts, toffee, and caramel. The exact flavor will depend on the type of grain used to brew the drink. Scottish ale, dark lager, and Barleywine are all styles of beers with a malt flavor.

Lastly, we have beers with a roast-y taste. These are dark with a heavier body and are made from roasting grains at high temperatures to give an almost burnt product. Porter, Stout, and Brown Ale embody the flavor of roasty beer.

By far the biggest difference between mead vs beer is the alcohol content in these two drinks.

The amount of alcohol in beer is between 4 and 7 percent by volume. Many beers average 5 percent alcohol by volume and in countries such as the United States, anything that exceeds these alcohol content ranges ceases to be categorized as beer.

Mead has a much wider ABV range with servings varying from a low of 3 percent to as much as 20 percent. The alcohol content in sack meads ranges between 14 and 20 percent while session meads have the lowest amount at about 3 and 7 percent. In between, there is the standard or traditional mead with an average ABV of 7 to 14 percent.

Keeping alcohol content in mind, connoisseurs recommend starting with something light, perhaps a crisp fruity flavored beer or a session mead to orient yourself before graduating to experiment with more complex varieties.

Both mead and beer are very versatile drinks, each bringing something unique to the table. The two have a wide array of flavors to choose from whether you are looking for fruity and sweet properties or aromatic and tangy notes.

For sure, mead is not for everyone, some might enjoy its super fruity or super dry offering while others might be safer with the common beer. Either way, it doesn’t hurt to experiment until you find a drink that truly speaks to your palate. 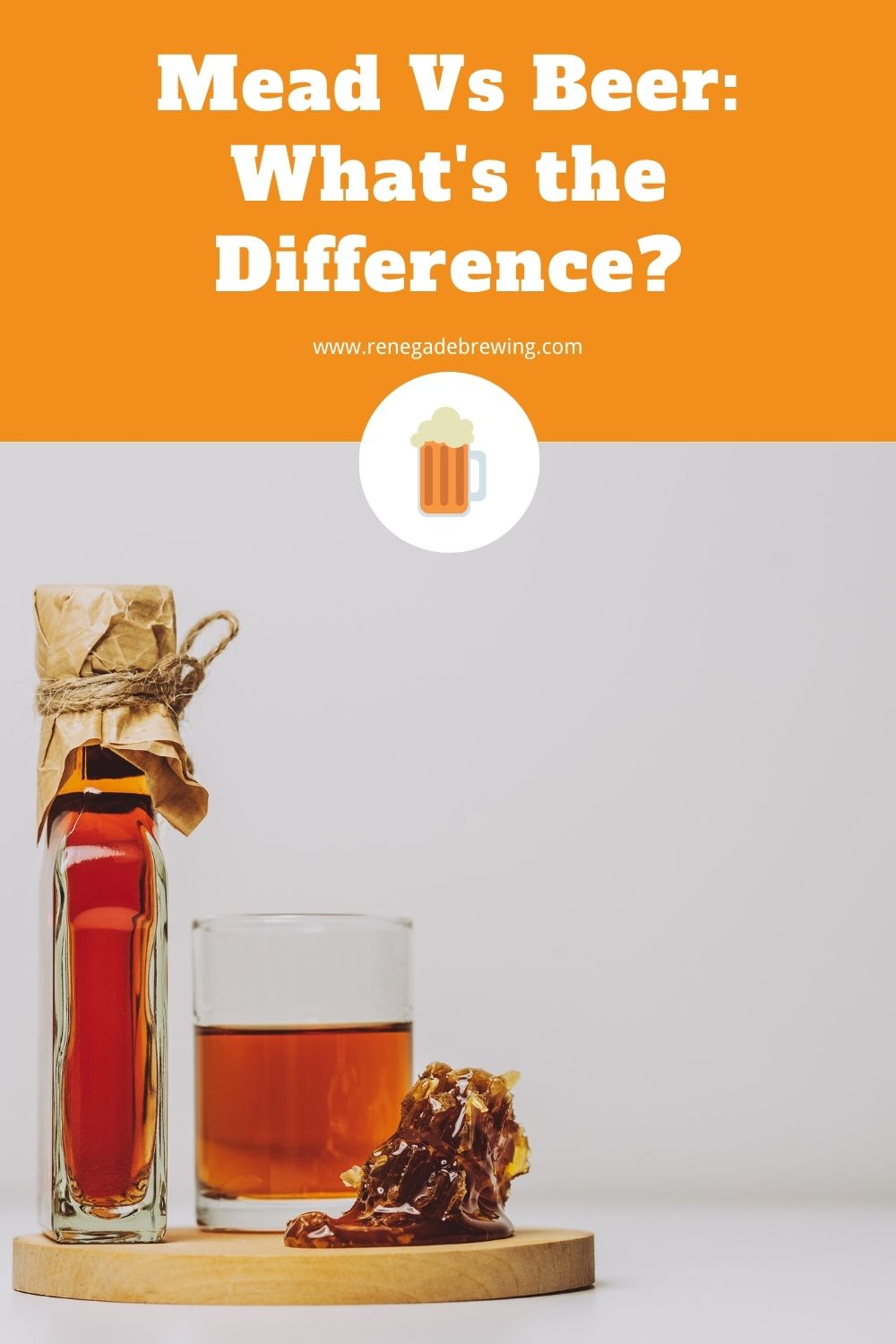