Beer drinkers have a love-hate relationship with off-flavors. While some consider flaws in the flavor of beer normal and even desirable, others can’t quite stand putting weird-tasting beer down their throats. 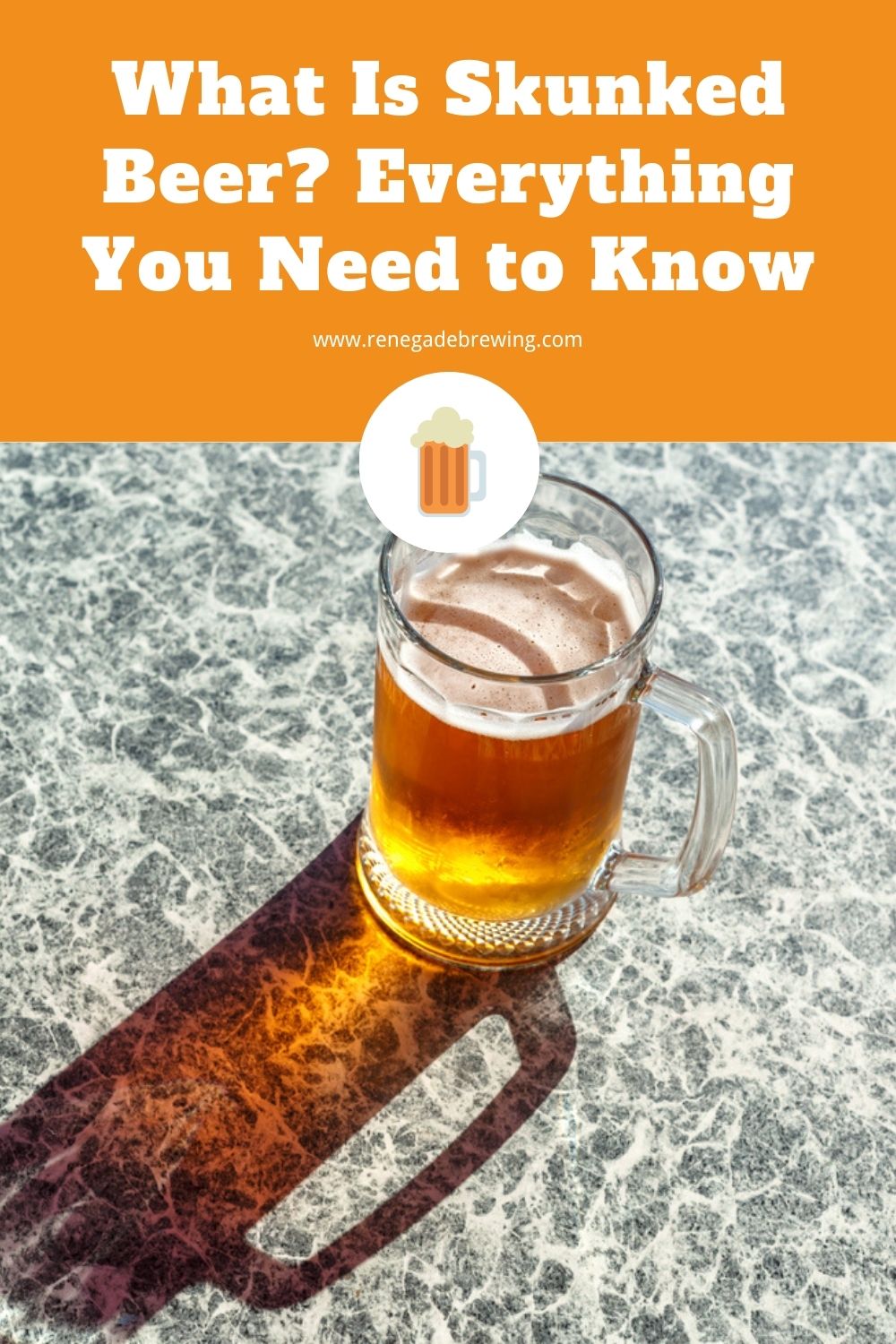 Skunked beer is one of those notorious off-flavors that are quite controversial—some beer fans can notice it, others can’t tell the difference, while others can notice it and either go with the flow or be completely repulsed by the smell and flavor.

If you are wondering what skunked beer is and what it tastes like, you have come to the right place. We’ll give you the lowdown on everything you need to know about this off-flavor. Read on!

Skunked beer is bottled beer that has undergone a specific chemical reaction from being exposed to ultraviolet light or artificial light. The chemical reaction then causes the beer to taste and smell like the secretions of a skunk.

For a better understanding, let’s break down the reaction that causes skunking in beers. There are four main ingredients used in making beer: hops, yeast, grain, and water. Hops contain alpha acids, which are what give beer its bitter taste.

Alpha acids, also known as isohumulones, are extremely sensitive to light and they will break down quickly in the presence of sunlight or bright fluorescent light. This is why skunk beer is also referred to as light struck.

When isohumulones break down, they rapidly react with the Sulphur content in the beer and this reaction produces a chemical compound known as 3-methyl-2-butene-1-thiol (MBT). This compound is chemically similar to the substance that makes a skunk’s secretions so smelly and potent.

Humans are extremely sensitive to MBT and will detect even the slightest amount of this compound if it were added to an entire lorry of beer! This explains why the smell and taste of skunked alcohol are unmissable. A quick whiff of the bottle and you will be able to tell that the beer’s flavor and aroma are off.

Have you ever wondered why beers are mostly packaged in green or brown bottles or cans? Brewers intentionally opt for these bottles to slow down or minimize skunking and preserve the quality of the beverage.

As we’ve explained, light exposure is the main cause of beer smelling and tasting like a skunk. In particular, artificial light that is in the wavelength of between 400 and 500 nanometers (nm), and ultraviolet light with a wavelength of below 400nm is the biggest culprit.

Brown bottles can block out light under 500nm in wavelength while the green glass is only capable of blocking light that is under 400nm in wavelength. Cans are also a popular choice for serving beer because the aluminum tin blocks out all the ultraviolet and artificial waves of light.

Clear glass is the least effective in blocking out harmful ultraviolet and artificial light. Does this mean that all clear glass beers are skunked? The answer is: not necessarily. Many of the big brewers who package their booze in clear glass bottles have found a way to preserve the quality of their beer. They use tetra-hops instead of normal hops.

Tetra-hops are a form of hop extract or inactive hops that are resistant to light. As such, even when exposed to light, the beer will not react and will therefore not produce the skunk-smelling MBT.

In many grocery or alcohol stores, you will find beer stored in refrigerators that are lit up by bright fluorescent lights. To prevent direct exposure and to keep the beers from skunking, a protective sheath is usually placed over these lights.

How To Tell If Beer is Skunked

It is said that for the most part,  Americans drink skunked beer and this has become an acquired taste so beer drinkers cannot tell whether or not beer has a skunk-like off-flavor.

So, how do you tell if beer is skunked? Light struck beer has the distinct smell of burnt rubber. To others, the smell is reminiscent of cat musk or a musty basement. Most of the time, skunky beer is also oxidized beer, which results in a wet paper or wet cardboard-like smell.

A whiff alone will tell you if your bottle or glass of beer is skunked but you can also do a taste test. Light struck beer will usually taste flat and lack the crispiness of a fully carbonated beer that has been stored in the right conditions.

Skunky beer elicits so much interest that there are several misconceptions about this off-flavor.

Let’s take a look at some of the most common myths.

Whether you are new to beer-drinking or you are a veteran, you have probably been warned by others in the beer fandom against letting a cool beer warm to room temperature or even worse, cooling, warming then cooling the beer. The belief is that this unacceptable behavior will cause your booze to skunk.

As we have seen, beer getting skunky has more to do with exposure to light than to temperature differences. A cold beer will indeed taste different from a warm one but this taste difference is not because the warm beer is skunked.

Another misconception is that light-struck beer that develops a skunky smell must have been left exposed to direct sunlight or artificial light for hours or days. The truth is that the chemical reaction triggered when light interacts with beer hops happens within seconds of the beer being exposed to light.

You can experiment with this on your own: pour your favorite beer in a glass and place the glass under direct heat for a few minutes. Then, taste the beer and notice the difference between your regular beer and the light-struck one.

Will Skunked Beer Get You Sick?

Light struck beer does not smell or taste that great. So, naturally, you might worry whether it is safe to drink beer that has been exposed to light and is now smelling like a skunk.

Believe it or not, skunked beer is not unsafe to drink. Although a chemical reaction takes place when beer is exposed to light, the reaction only affects the profile of the beer and not its safety. So, you will not get sick just from drinking skunked beer.

The only difference between skunked beer and regular beer that has not been exposed to light is the smell and taste. Skunked beer might have a bit of an unpleasant taste or smell but that is all there is to it. It is no more or no less safe than beer that has been stored away from light.

It is also important to keep in mind that the chemical reaction between light and the alpha acids does not increase or reduce the amount of alcohol in the beer. A common misconception is that unopened beer that has been exposed to light will have a stronger buzz.

The only thing that happens when beer is exposed to light is that the alpha acids are broken down and some molecules mix with sulfuric acid to produce a distinct flavor in the beer. This process has no bearing on the amount of alcohol in the beer. The alcohol content is determined during fermentation and not much can be done to increase or reduce the volume of alcohol after the beer is bottled.

Is Oxidized Beer the Same as Skunked Beer?

Ideally, the first time air comes into contact with beer should be right before you drink the beer. Exposing your booze to oxygen will cause an instant chemical reaction that will diminish the flavor of the beer.

During brewing, yeast is used to break down the sugars in unfermented wort, resulting in carbon dioxide (CO2) and alcohol. The CO2 gives beer its characteristic crispy flavor and mouthfeel. When beer is exposed to oxygen, it loses the carbonation and the fresh crispiness, resulting in a flat-tasting beverage.

The truth is, regardless of how beer is stored, some air will still come into contact with it. In fact, some drinkers have gained an acquired taste for oxidative flavors. But, you should aim for minimal exposure to oxygen By drinking your beer as soon as you pop the cap open.

Skunked beer tends to be oxidized. Exposure to heat and light can also accelerate the oxidation process, leaving you with beer that not only smells like a skunk but also is flat to the taste.

Light, heat, and oxygen are the biggest enemies of beer. While some oxidation is inevitable, you can prevent exposure to light and heat. This will keep off-flavors such as skunk at bay and ensure that your beer stays fresher for longer.

In case your beer is skunked, you can still safely drink it although you will have to deal with an unpleasant smell or taste, especially if you are not used to that type of flavor and aroma. 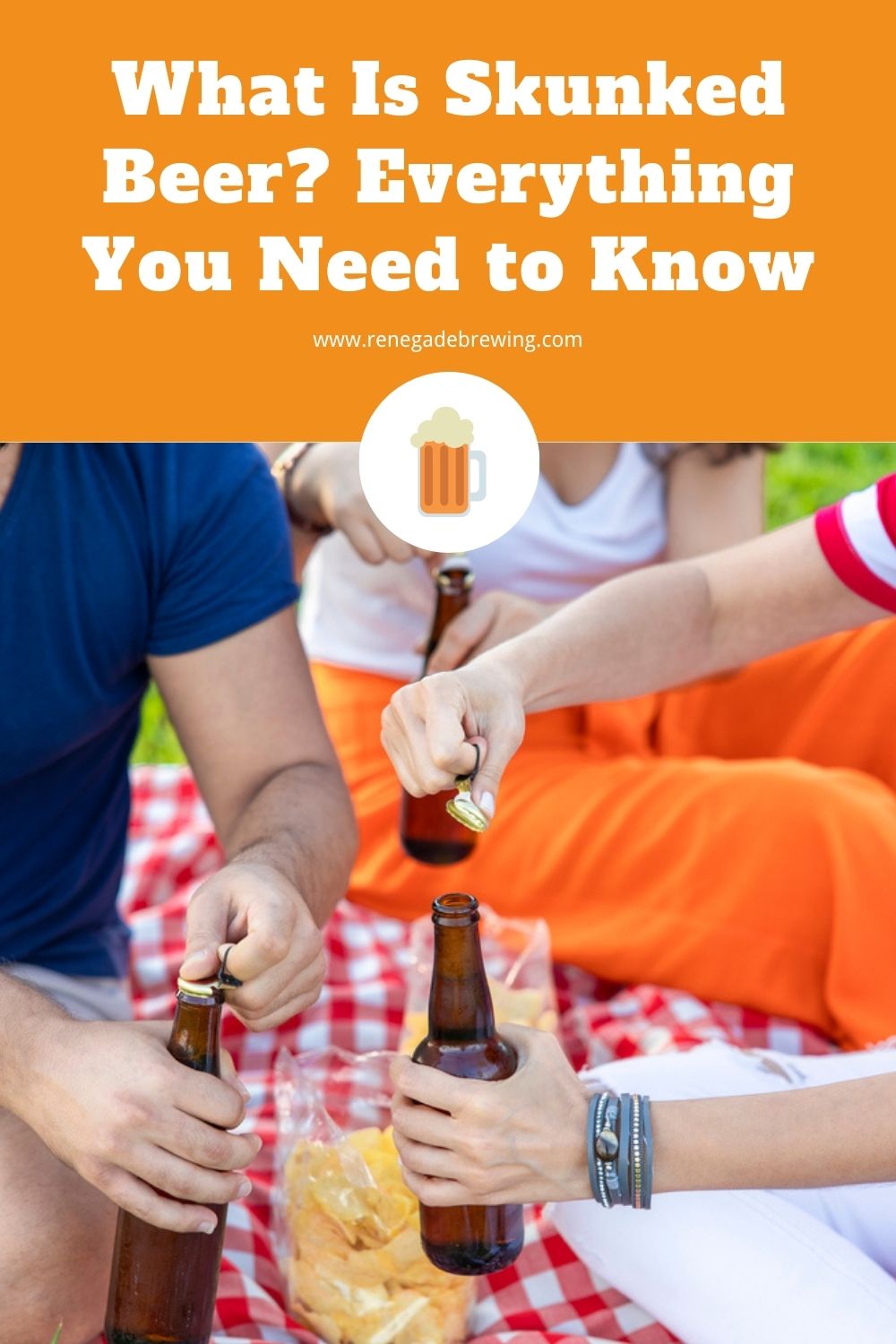