What is Kolsch beer? This obscure beverage is some German response to the famous Pale Ale made in Britain. Nowadays, it is trendy in the US, probably because something difficult to access is always attractive and desirable. On the other hand, greater demand would make it easier to find, so it seems that real beer connoisseurs are in a vicious circle. 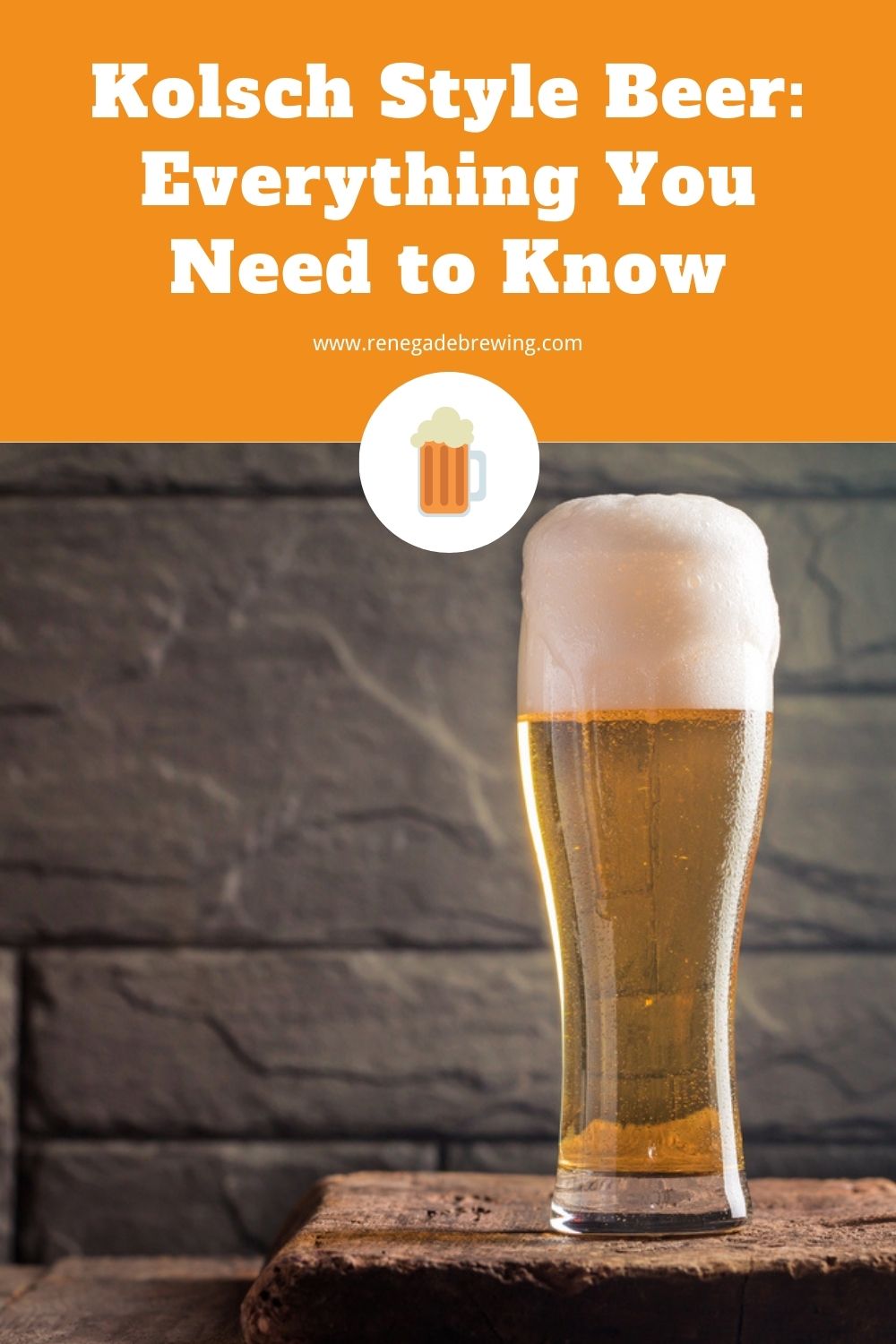 Anyway, it seems that brewers in the US are slowly discovering the benefits of this delicious drink and accepting an innovative brewing culture from Cologne, Germany. Since many American pilsner admirers are ready for the new taste of an old beer brand, let’s get acquainted with this new brew and learn why to love it.

What Is Kolsch Beer?

Kolsch (Koelsch) is a top-fermented pale ale variation brewed in Cologne (Köln), Germany. Brewers use ale yeast and light, Pale or Vienna, or pilsner malt to keep it crisp. In some cases, they add wheat malts for smoothness. It is necessary to add noble German hops for the best result.

After fermenting at warm temperatures, it is necessary to let the brew sit at low temperatures for a few weeks. It is the lager production method, which makes Kolsch a hybrid beer type.

While ale yeast adds desired fruity and bread-like flavors, this cool temperature gives Kolsch a recognizable crisp and dry quality. The result is a light and a bit fruity beer with a low alcohol percentage.

Keep in mind that you can find originally designated Kolsch only 31 miles (48 km) of Cologne. All other variations are considered Kolsch-style brew, but not the right stuff.

Kolsch beer is an excellent example of typical German brewing heritage and unique style based on applying special yeast. Its roots are in the Cologne brewing tradition from the 17th century when fanatic German ale brewers decided to stop using inferior ingredients in brewing.

These dedicated masters refused to accept awful brewing practice and began with adopting specific ale. This beer was made of warm top-fermenting ale yeast, unlike popular lager beer made with cold bottom-fermenting lager yeast.

That was how to standardize the beer production in the city before hops became an overwhelming choice for getting a beer. From that particular moment, patrons of local taverns stopped drinking low-quality, stale, or even souring brew.

Remember that hops are a preservative with antimicrobial properties and can keep the beer unspoiled. If you add this ingredient’s bittering qualities, it is possible to imagine why past and future brewers have tended to base all beer production on this plant.

As for Kolsch, it is a relatively new beer style, and its current form was perfected in the late 19th century. While Czech brewers made pilsners, Germans tried to produce clear, golden, pale variation entirely different from usual dark brews popular in their country.

While Bavarian brewers started the Helles lager production and Dortmunder brewers perfected their own recipe, Kolsch was born in Cologne at about the same time. The name Kölsch appeared in 1918 for the first time in history as a tribute to its city of origin.

Kolsch beer is vital to Cologne. In the past, it was possible to make this beer type anywhere with the right recipe, but everything changed in March 1986. That was a moment when two-dozen Cologne brewers organized the Kolsch Konvention teamed up with the German government.

They accepted the set of rules and established the definition of a true Kolsch. That way, they defined the style and prevented other breweries, including foreign ones, from creating fake, watered-down versions.

This set of rules included guidelines of Kolsch’s looks and tastes, so criteria determined the Kolsch beer to be:

They also agreed that no one except brewers of the Cologne metropolitan area has the right to produce it.

In other words, only a Kölsch style version brewed within Cologne’s city is acceptable. All other beers made according to the same recipe need to have the level with the name – Kolsch-style ale.

European Union announced Kolsch a beer with a PGI (protected geographical indication) in 1997. That way, Cologne became an exclusive region for supplying the EU with Kolsch beer.

American brewers often ignore the Kölsch Convention and name their product Kölsch, even though it is made far away from this city. On the other hand, some of them name their brew Kolsch Style American Ale out of respect for Cologne colleagues. Legally, this name protection only extends through the EU.

If you like sparkling, crisp, and slightly fruity flavors, soft and delicate light Kolsch with malt character is the right drink for you. Carefully chosen hops accentuate the aroma and balance the malt, providing the brew with very low bitterness.

Even though Kolsch is actually ale, it reminds me of a more complex, less bitter pilsner with lower alcohol content. It will refresh you during hot summer days and enchant you with a clear, bright golden color. You will adore its unique grainy and a bit malty aroma, with a delicate fruity note and brisk, unbelievably energetic feeling after swallowing it.

Most beer lovers agree that this pale beer type is the most subtle and distinctive. Keep in mind that this is a low-carbonated beer, so you should drink it fast to enjoy the full taste.

In most cases, you can’t feel the hop aroma, but some brewers insist on its noble character. However, variations in flavors and appearance are negligible no matter who produces it, and a range of characteristics is relatively small even though the Convention technically didn’t forbid experimenting.

This beer contains German Pilsner or Pale Two-row malt with only a small portion of wheat malt that adds a gentle bread note and improves head retention.

You can also add some Vienna or Munich malt, depending on your taste. Some brewers use a pilsner-like or some other light malt extract that attenuates reasonably well.

Hops add typical flavor and bitterness to beer, so you should be careful with choosing this ingredient. A bitterness-to-starting gravity ratio should be in a 0.4 to 0.6 range. Ideally, you should use German noble hops like Hersbrucker, Hallertau, Spalt, or Tettnang.

If you can’t buy any of them, you can choose most German or American versions of German hops, as well. The goal is to achieve a slightly sweet beer start with a balanced character and a dry finish. Therefore, never use citrusy or catty American-type hops.

The best options are Wyeast 2565 Kolsch and White Labs WLP029 German Ale/Kolsch yeasts that provide the low-ester profile and a desired dry finish. Keep in mind that both Kolsch yeast types don’t flocculate quickly, so you should let it near-freezing temperature for at least a month to allow your beer to clear.

Kolsch beer is not the first German beer on the US craft beer scene, but it is one of the most distinctive brews you can find on the market. Technically, it is impossible to make the real Kolsch out of Cologne, Germany, but some American craft brewers have embraced the brewing style and make Kolsch-style beer.

Craft beer connoisseurs enjoy this American version, especially during warm seasons. Remember that Kolsch is ale, not a lager, unlike the most bright, golden beers from Germany. It is always clear, golden yellow, with unique sliced apples or pears aroma mixed with the subtle malt character, which is impossible to feel with other beer types.

The way of serving traditional Kolsch is almost as crucial as the way of brewing. Traditionally male servers, Kobes (Kobessen) working in the Cologne pubs, serve this beer in stange glasses (meaning rod, stick) directly from small barrels perched on bar tops.

Since you should drink Kölsch fresh and at a temperature of 38 to 45 F (3.3 – 7.2 C), such small servings are essential since your brew won’t have time to become warm and stale.

Never order any other beer type in such pubs since you won’t get it. Kobes will give you a coaster and mark a tick on it with each new round of drinks. Once you finish drinking, you should place the coaster on the glass top. It is a sign for a server to bring a bill.

Kolsch (Koelsch) is a top-fermented pale ale brewed in German city Cologne. Its agreeable nature allows you to drink it while eating nutty cheese, fish, bratwurst with sauerkraut, or traditional German sausage. Take a stange glass, pour some beer, and enjoy. Cheers! 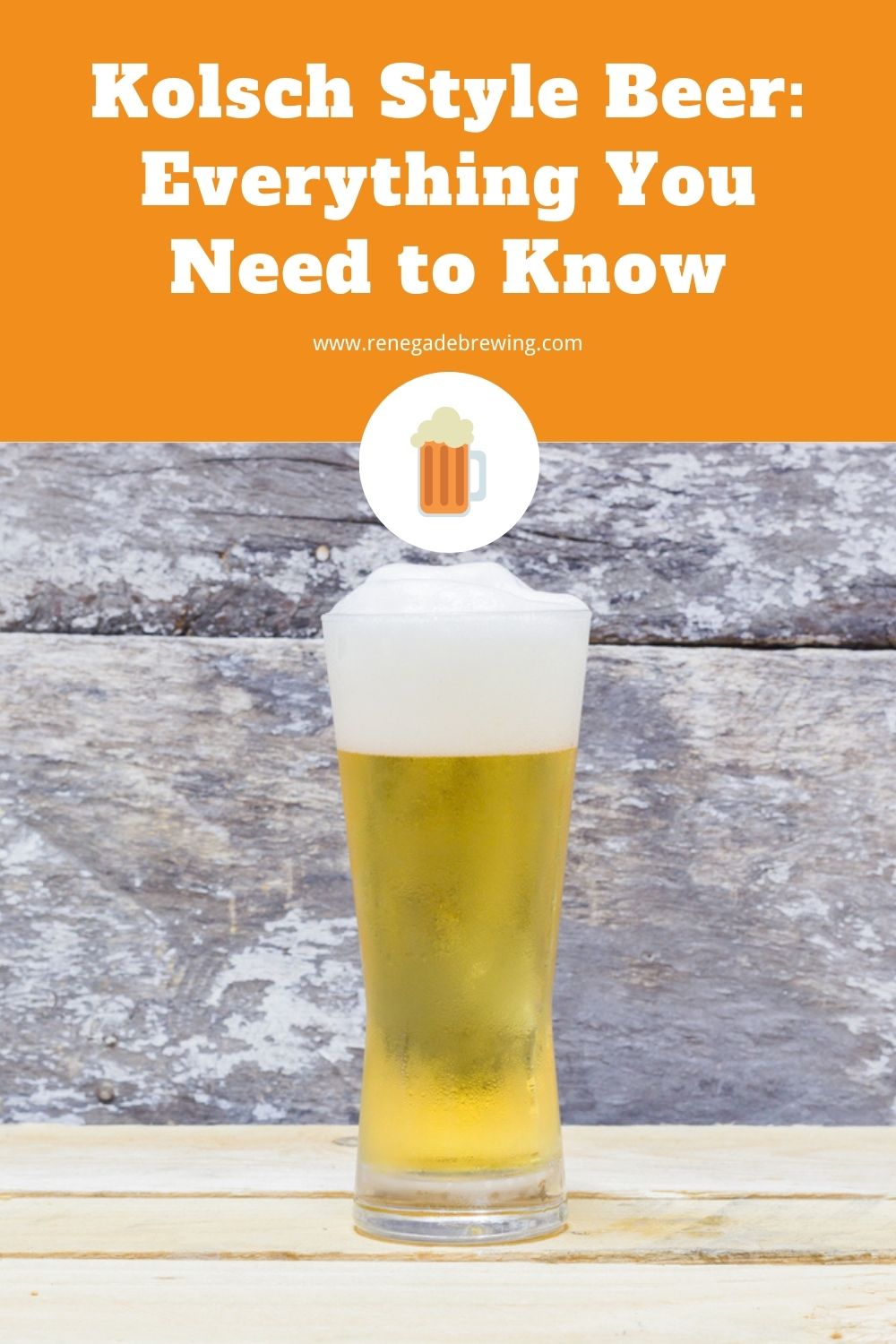 1 thought on “Kolsch Style Beer: Everything You Need to Know”